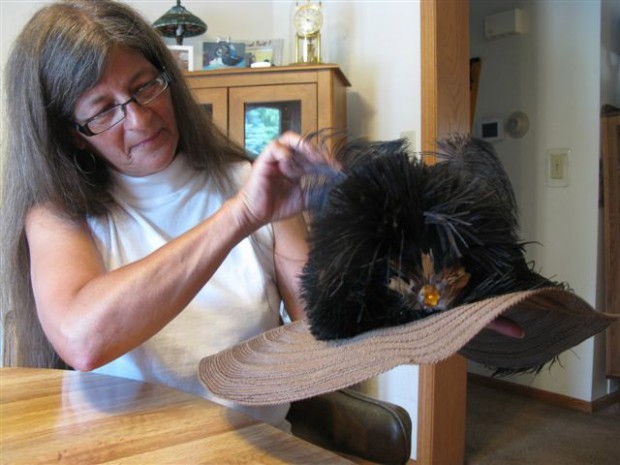 Cheryl Gruis works with a hat for her Molly Brown costume. The Rockford woman has costumed everything from plays to Christmas programs. The Titanic costumes will be worn “to tea” by Gruis and her mother. 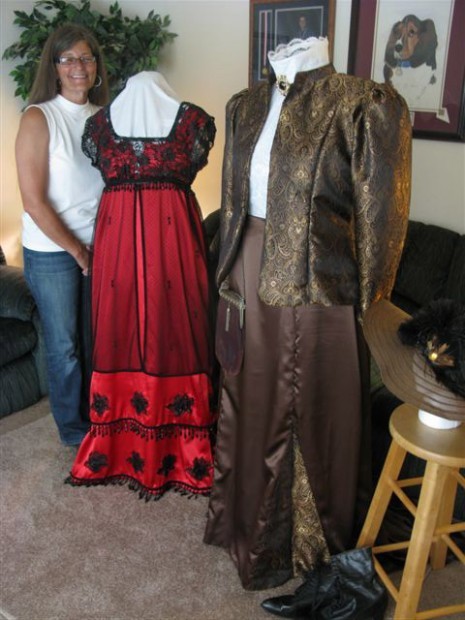 Cheryl Gruis of Rockford shows her Titanic creations: Rose’s dress on the left and the “Unsinkable” Molly Brown dress on the right. 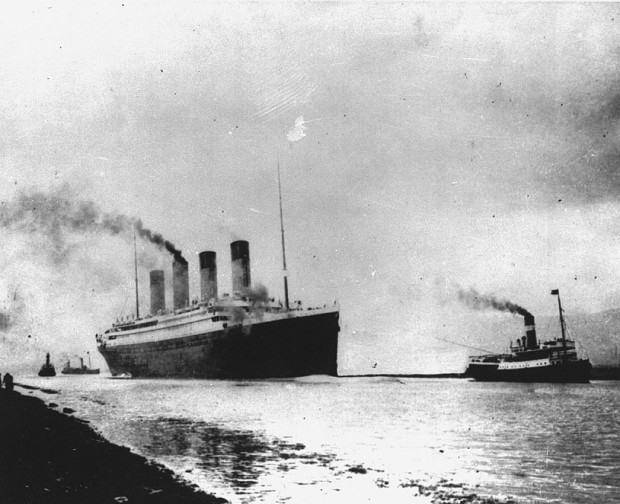 ROCKFORD — Cheryl Gruis preserves history by sewing it together, one stitch at a time.

She has just completed a pair of costumes that celebrate two survivors of the Titanic — one fictional and one real. The Titanic sank 100 years ago this year.

One creation is a cherry red silk Edwardian dinner dress, worn by the character Rose in the movie, “Titanic.” The other is a depiction of the “Unsinkable” Molly Brown — a true survivor.

It is the kind of whimsy that frames a lot of what Gruis enjoys: Portraying our past by wearing it. Many of her creations are used in theatrical productions, but she makes them because she loves them, she said.

She has created plenty of different types of costumes, from Mickey Mouse to Renaissance wear that she and her mother wore to the Renaissance Faire in Shakopee, Minn. Her collection has grown to about 75, she said.

She has created costumes for North Iowa Area Community College Christmas shows, and for productions at Rockford Senior High School.

It is not a hobby for the impatient.

One period dress might take months to make. Rose’s dress, for instance, has a black net overbodice and skirt that are hand-beaded.

But that is the price of making a day dress or a gentlemen’s waistcoat with authentic detail, she said.

The sinking of the Titanic intrigued a nation for years, she said, and falls within a date range of costumes that she particularly enjoys making.

She finds patterns at special vintage stores or websites. Accessories — shoes, parasols, jewelry and purses — are found in antique stores or online. She also creates hats.

Gruis would like to start creating vintage purses with real glass beads; she would also like to create more sophisticated hats.

History remains fascinating to Gruis. Her own family established a pioneer farm near St. Ansgar in 1868.

“I think people back then did not expect so much — and they accomplished more,” she said.

“There is a part of me that does this for our elders, to honor them, what they came through, to bring us here,” Gruis said.

“So, I sew history instead of collecting it,” she added.

'Crispitos,' other student lunch faves missing on trays this year

Students this year may be disappointed to see their favorite food items will no longer be on their trays.

Cheryl Gruis works with a hat for her Molly Brown costume. The Rockford woman has costumed everything from plays to Christmas programs. The Titanic costumes will be worn “to tea” by Gruis and her mother.

Cheryl Gruis of Rockford shows her Titanic creations: Rose’s dress on the left and the “Unsinkable” Molly Brown dress on the right.