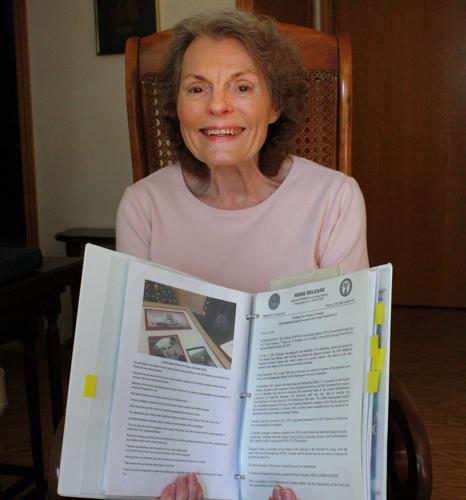 Martha Wallace of Hampton, who is the niece of U.S. Navy Fireman First Class Leo Keninger, a native of Ackley who was killed at Pearl Harbor, has chronicled the young life of her nephew. Keninger's remains were identified in 2019 and will be buried in Iowa in June. 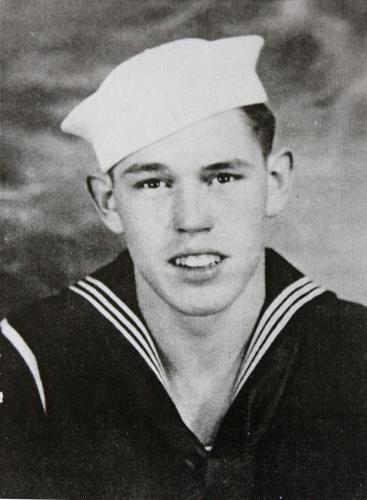 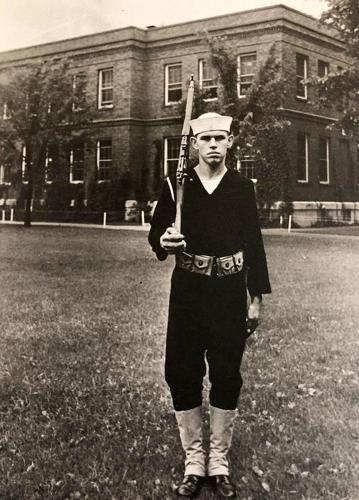 A grave marker for U.S. Navy Fireman First Class Leo Keninger, a native of Ackley, in the Halawa and Nu’uanu cemeter in Hawaii.

Nearly 80 years after his death at Pearl Harbor on Dec. 7, 1941, a Franklin County man will finally be laid to rest in his hometown cemetery.

A funeral service and burial with full military honors was planned for June 2020 in Ackley, but had to be postponed due to the COVID-19 pandemic.

The service and burial have been rescheduled for next month.

Keninger, who was 20 when he died, had eight brothers and sisters, none of whom are still living. He is survived by more than 30 nieces and nephews.

Wallace, 78, the oldest of the cousins, said they were all born after Pearl Harbor and never had a chance to know their uncle, but “he was still part of the family.”

She said when she and her cousins were growing up, they heard stories about Keninger from their parents.

Keninger, who grew up on the family farm and graduated from Ackley High School in 1939, was inducted into the U.S. Navy in May 1940. He was sent to the Great Lakes Naval Station in Chicago for training as a fireman.

He was transferred to Pearl Harbor in October 1940 and was stationed on the USS Oklahoma.

The ship was one of those sunk during the surprise attack by the Japanese on Dec. 7, 1941, which resulted in the United States entering World War II.

Keninger was one of the 429 crewmen on the USS Oklahoma who died during the attack. A total of 2,402 Americans lost their lives at Pearl Harbor that day.

Wallace’s grandparents received a letter from the Navy telling them Keninger was presumed dead. She said it was extremely difficult to positively identify the remains of those killed at Pearl Harbor because DNA testing didn’t exist then.

Here is what the Navy Department sent to the Keninger family (according to information found on findagrave.com):

"After exhaustive search it has been found impossible to locate your son, Leo Thomas Keninger, fireman first class, U.S. Navy, and he has therefore been officially declared to have lost his life in the service of his country, as of Dec. 7th, 1941. The department expresses to you its sincerest sympathy."

Chief of Bureau of Navigation

Wallace said her mother, who was one of Keninger’s sisters, got a letter from a friend of his who also served on the USS Oklahoma but survived because he was on deck at the time of the attack.

He told her there was no way Keninger, who was on duty in the engine room when the ship was torpedoed below the water line, could have gotten out.

“They didn’t really have much of a chance of saving anyone deep in the ship,” Wallace said. “It must have been more horrible than we can imagine.”

From December 1941 to June 1944, Navy personnel recovered the remains of the deceased crew from the USS Oklahoma. The remains were interred in the Halawa and Nu’uanu cemeteries.

In September 1947, members of the American Graves Registration Service, which was tasked with recovering and identifying fallen U.S. personnel in the Pacific Theater, disinterred the remains of U.S. casualties from the two cemeteries and transferred them to the Central Identification Laboratory at Schofield Barracks.

The lab staff were only able to confirm the identification of 35 men from the USS Oklahoma at that time.

The unidentified remains were buried in 46 plots at the National Memorial Cemetery of the Pacific, known as the Punchbowl, in Honolulu.

In October 1949, a military board classified those who could not be identified, including Keninger, as non-recoverable.

Between June and November 2015, Defense POW/MIA Accounting Agency personnel exhumed the USS Oklahoma unknowns from the Punchbowl for analysis.

Ten or 15 years ago, two of Keninger’s brothers, who were still alive at that time, gave DNA samples in hopes that it would help identify him someday.

Now that Keninger has been identified, a rosette will be placed next to his name on the Courts of the Missing at the Punchbowl.

Wallace has visited the Punchbowl.

Wallace and her cousins have been hearing about the military funerals that have been held for others who died at Pearl Harbor whose remains have only recently been identified. They are large events with many people in attendance.

The visitation for Keninger, which is scheduled for 4-8 p.m. on June 25, will be held at the high school gym in Ackley “because it was the biggest place we could find,” Wallace said.

The funeral Mass will take place at 10:30 a.m. on June 26 at St. Mary’s Catholic Church in Ackley, followed by graveside services at St. Mary’s Cemetery, where Keninger’s parents and many of his siblings are buried.

Both the Patriot Guard Riders and the Navy will participate in the services.

Wallace said she is grateful to the Navy, which has helped so many families, including hers, organize the funerals for those who died for their country so long ago.

“It just feels good to know that his remains are back here with his family where I’m sure he would have wanted to come when he was done with his service,” she said. “It has filled kind of an empty space.”

When Elma native John Mark Mulick Jr. enlisted in the U.S. Navy in 1940, he had to get his father, John Mulick Sr., to sign up for him because…

They Served With Honor nameplate-2021

Martha Wallace of Hampton, who is the niece of U.S. Navy Fireman First Class Leo Keninger, a native of Ackley who was killed at Pearl Harbor, has chronicled the young life of her nephew. Keninger's remains were identified in 2019 and will be buried in Iowa in June.

A grave marker for U.S. Navy Fireman First Class Leo Keninger, a native of Ackley, in the Halawa and Nu’uanu cemeter in Hawaii.