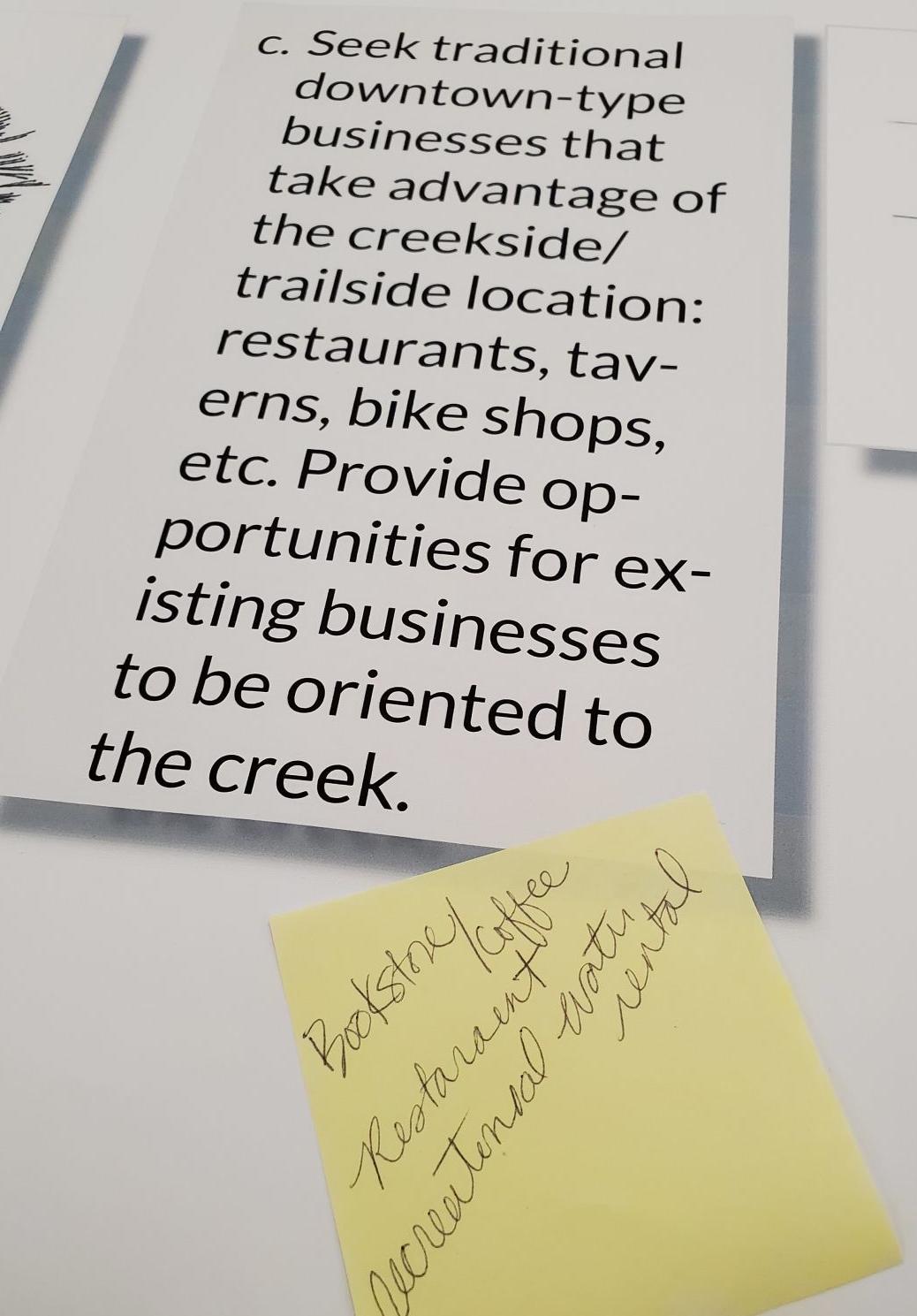 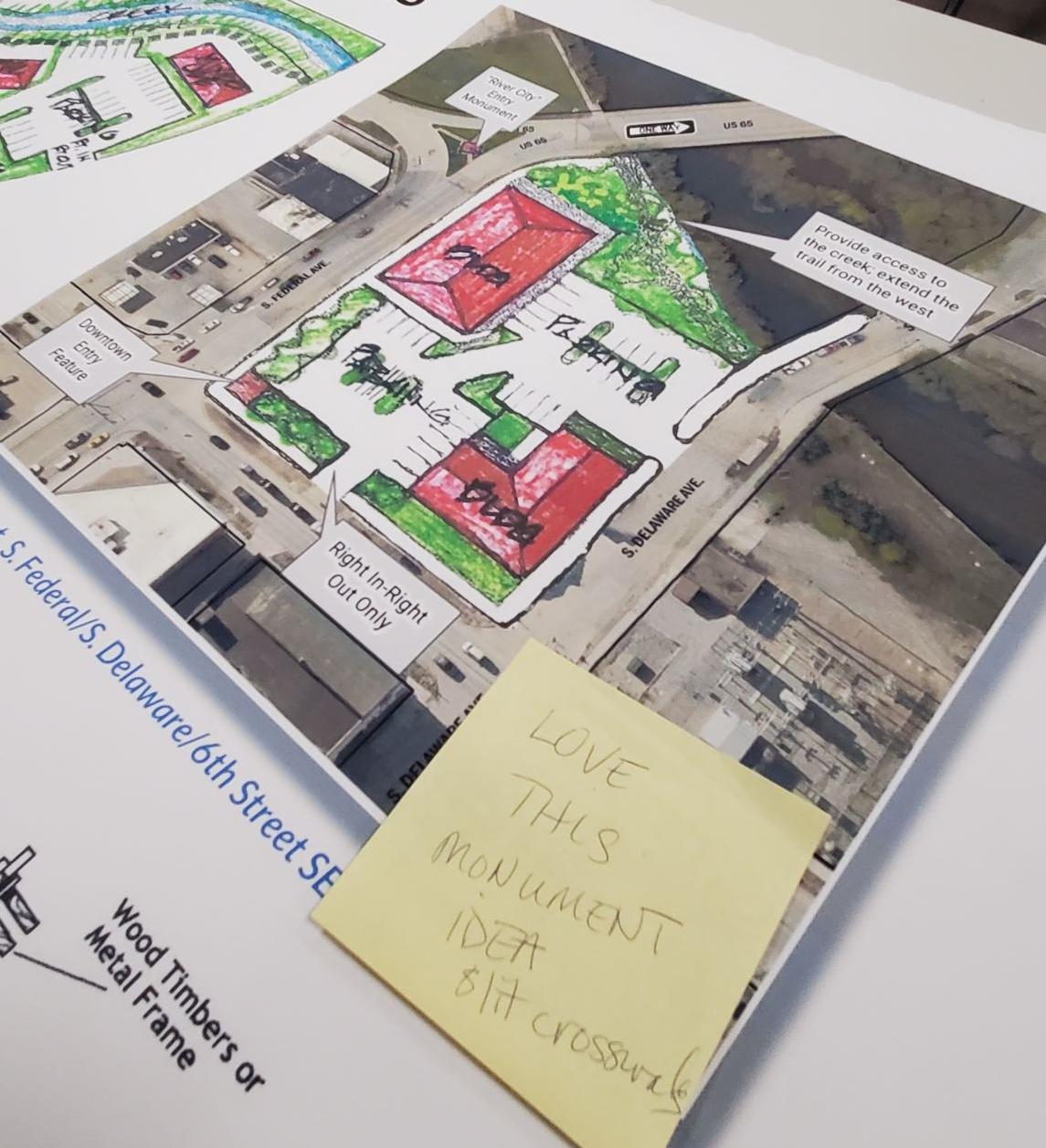 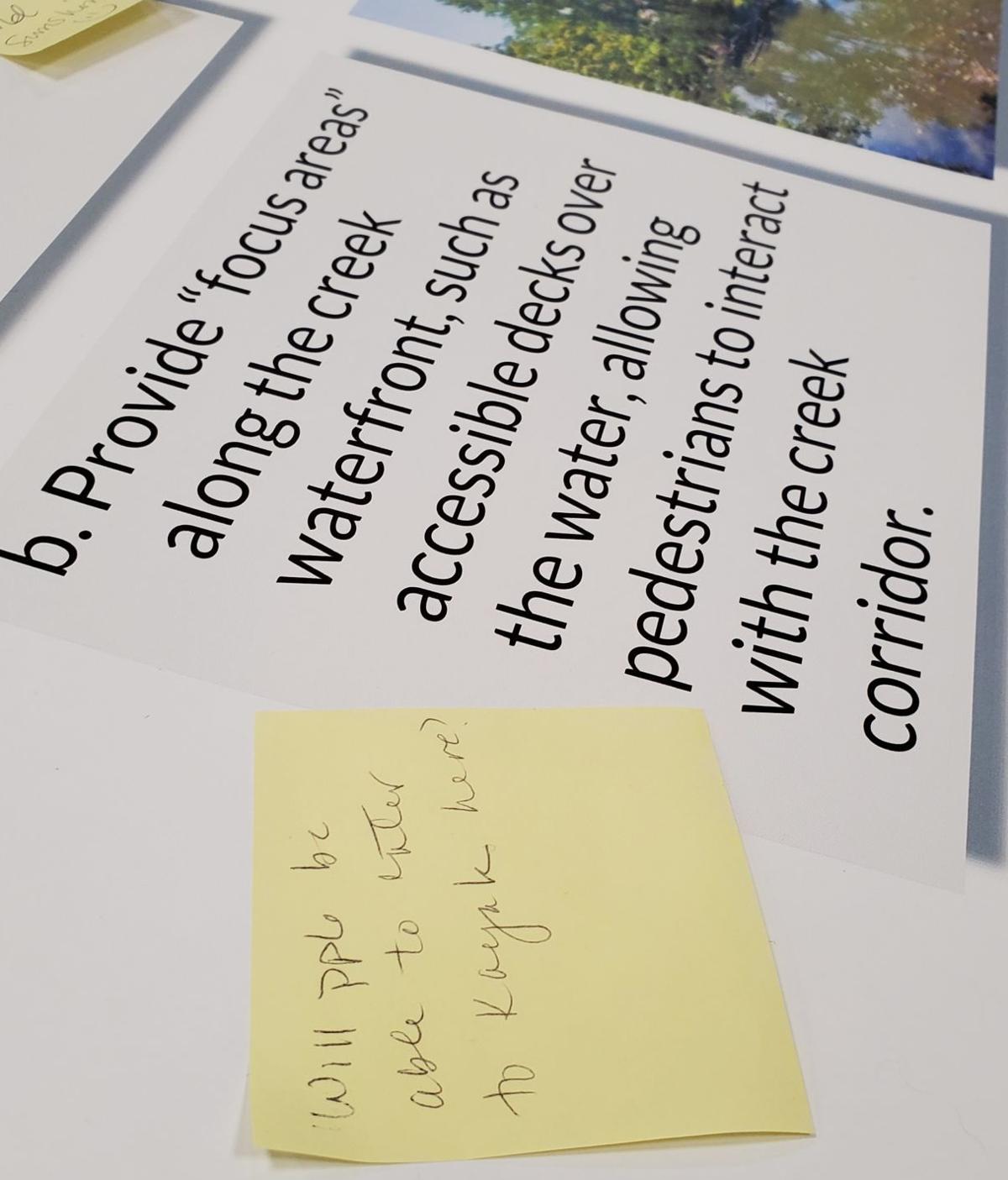 It’s tough to talk about the future of Willow Creek downtown without talking about its past.

That’s what Steven Van Steenhuyse, Mason City’s director of development services, talked about in his presentation of the draft Willow Creek Master Plan at a well-attended workshop on Thursday night at Southbridge Mall.

It was the public’s first chance to look at and comment upon the draft plan, the amalgamation of similar plans dating back 15 years.

In 2004, then-city officials recognized that the area surrounding Willow Creek downtown – roughly bordered by West State Street to the north, West Seventh to the south, South Pennsylvania Avenue to the east and South Monroe to the west – was underutilized.

A draft plan was developed that included, among other things, a trail with landscaping, a wayfinding kiosk and a place for people to sit. The plan also envisioned retail and residential development nearby. The crown jewel of the plan was a multi-purpose center, located where South Dakota developer Talon is now constructing a multi-unit housing complex.

“‘Wow. Great ideas’,” Van Steenhuyse imagined 2004 city leaders saying about their plan. “‘How can we flesh that out?’”

In 2007, the city adopted a downtown master plan that incorporated the Willow Creek draft. One of its more notable recommendations, Van Steenhyse said, was a splashy gateway sign welcoming people to downtown.

Exciting times! Those two words best describe the state of the city.

But then the 2008 flood struck, inundating parts of the land in the Willow Creek area. In the aftermath, the city participated in a federal buyback program that allowed it to purchase 177 flooded properties and demolish anything on them. Eleven of those were in the Willow Creek Plan area. That fact and the expansion of the Willow Creek floodplain by the Federal Emergency Management Agency meant the 2004 version of the plan was no longer viable.

But the idea of utilizing a small creek flowing through the city’s center as both a recreational and development draw remained.

So, flash forward to Thursday night at the Park and Recreation office in the mall, where tables were covered with maps, photos, illustrations and the goals the new 2020 draft plan seeks to achieve.

Some specifics listed in the plan were:

Attendees were encouraged to put sticky notes with feedback on any of the elements.

One said, “Bring back fishing!” Another offered suggestions for more creek front businesses such as a bookstore or a place to rent kayaks and canoes.

Resident and local businessman Larry Zilge said he thought it was a good idea to add an attraction that gave people something to do.

“People that live here know it’s there,” he said of Willow Creek and the trail. “But with the new hotel going up, people coming here wouldn’t know about it at all.”

There was no estimate for the overall cost of the plan, nor any concrete timeline. When finished and adopted, the final plan will have a matrix that will parse out pieces of it as immediate, mid-term and long-term, with the immediate pieces being achievable within a year or two, Van Steenhuyse said.

The expectation is not to achieve every goal in the plan in one fell swoop, and the city isn’t planning on spending millions to do so, said City Administrator Aaron Burnett.

Some cleanup of the area is already underway as part of the Talon development, he said, and there is money in the city’s Capital Improvement Program for next year that’s dedicated to a riverwalk along the creek.

The city also pitched a version of the draft Willow Creek plan to the state’s Great Places program as a possible recipient of funding. Burnett said the city was told to work on the plan, flesh it out and then come back.

“So it’s great for us to get to work on this now because of that,” Burnett said. “And because the area is exploding with development.”

The Planning and Zoning Commission will take the feedback offered Thursday and make its recommendation on whether to move forward on Feb. 11. The earliest the City Council can take it up is at its March 2 meeting.

But the most telling piece of feedback at the workshop on Thursday night was also the most succinct.

“Clean it up,” a resident wrote on a sticky note attached to a map of the area. 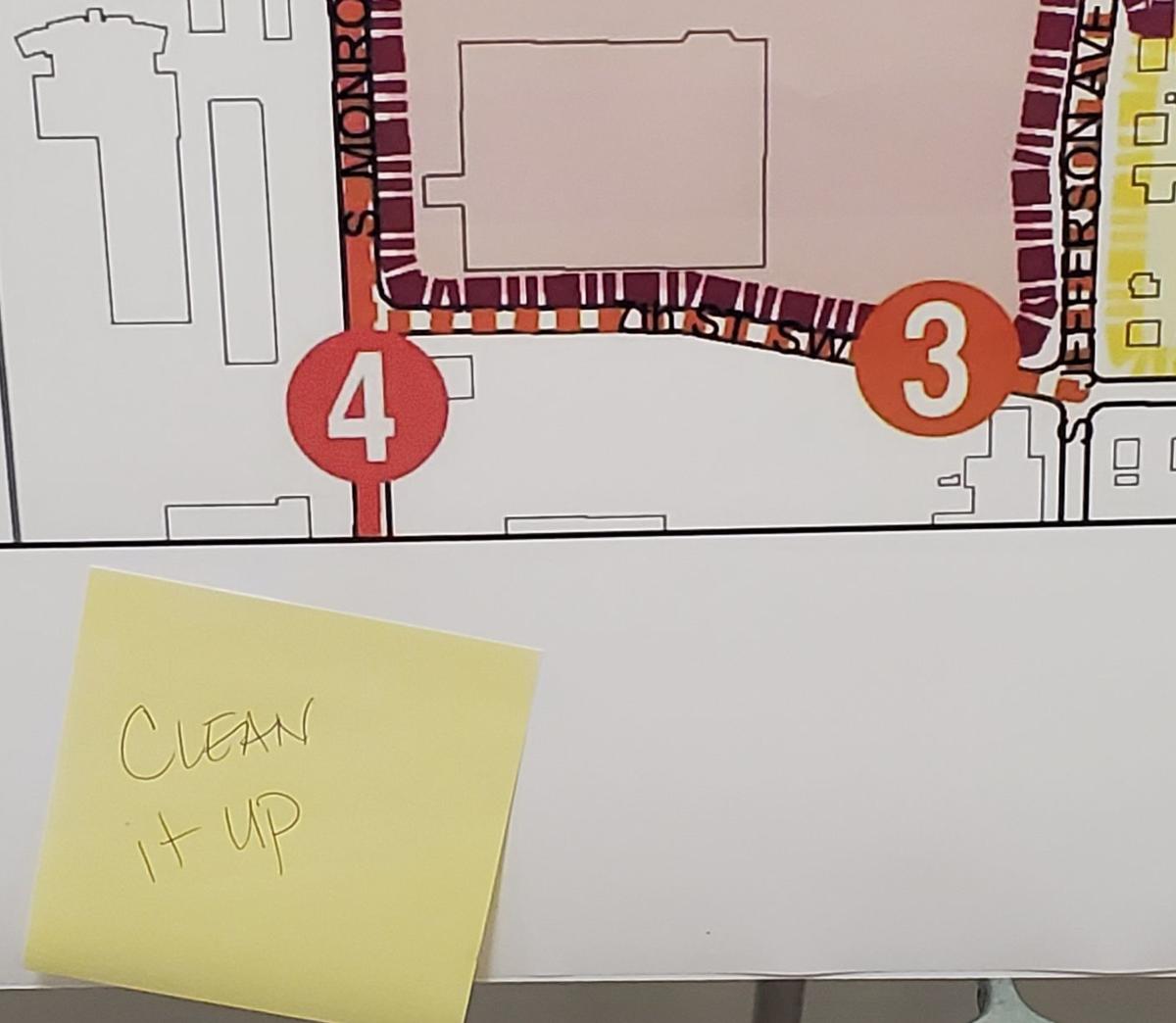 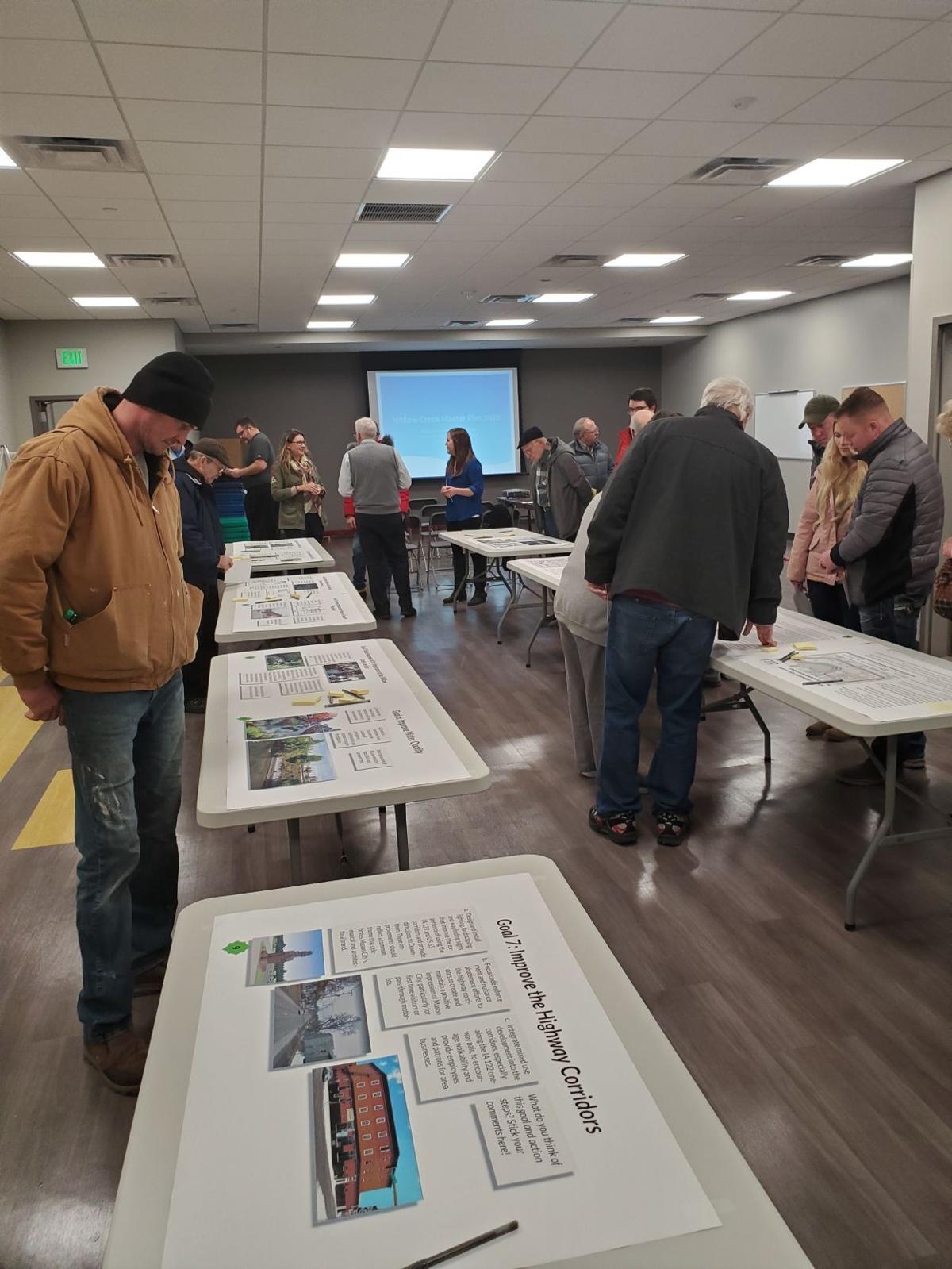 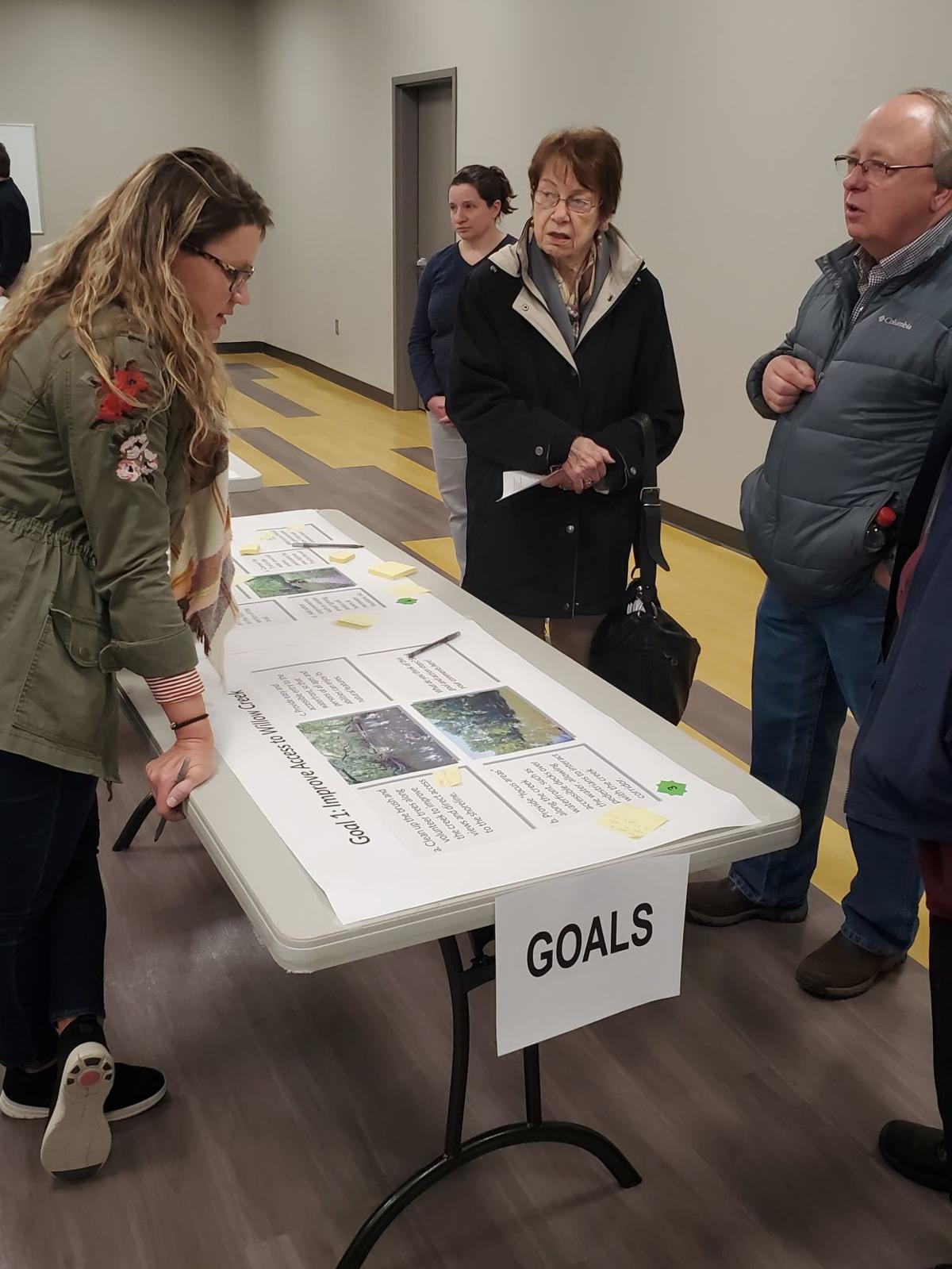 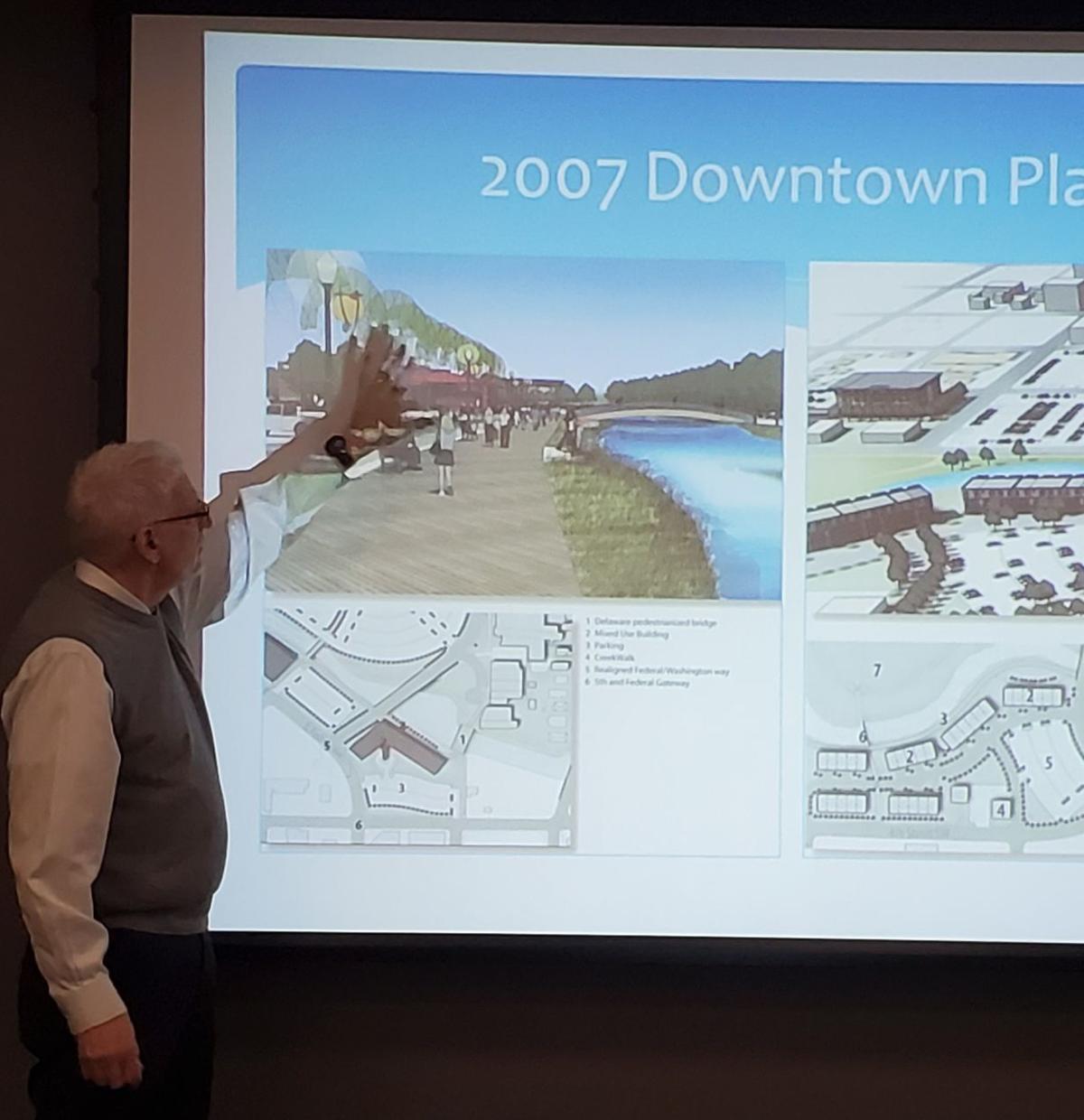 State Rep. Louie Zumbach is a “big believer” in local control, but when local officials won’t listen to their constituents, “it falls on me.”

When John Moreland went off to college at Notre Dame and later started a life for himself near Iowa City, Willow Creek stayed front of mind.

The Iowa Youth Straw Poll results are in, and Clear Lake High School students and Mason City CSD’s John Adams Middle School students vastly disagree on who their next president should be.

An Iowa House Judiciary subcommittee advanced legislation that could block so-called strategic lawsuits against public participation (SLAPP), such as the libel suit that led a Carroll newspaper to start a GoFundMe fundraiser to cover legal expenses it incurred defending itself against a libel lawsuit.

A bill that sought to classify the death of a driver involved in a minor vehicle accident as a death affecting the public interest failed to win approval from a Senate Judiciary subcommittee Thursday.

Minors could operate lemonade stands and sell other food without fear of local regulations shutting them down under legislation approved by the House State Government Committee.

Two veteran Senate Republicans say the 2020 session will be their last.

Another wild caucus ride has brought us here

At one point or another, 28 Democratic candidates have run for president in 2020.

Calif. bill would lower age of consent for vaccine

Calif. bill would lower age of consent for vaccine

This beautiful and personal Michelangelo piece has finally been restored

This beautiful and personal Michelangelo piece has finally been restored