Police continue to look for a Mason City man they say disappeared after a Wednesday night pursuit that led to a car collision.

Jamie C. McFarland, 28, of Mason City, was stopped in a 1992 Oldsmobile for a traffic violation in the 200 block of North Pierce Avenue around 9:20 p.m., according to a release issued by the Mason City Police Department.

But when officers tried to place him under arrest for an outstanding warrant out of Black Hawk County, McFarland closed the car door, smashing an officer's hand, and drove off with officers giving chase, according to the release.

McFarland drove northbound on Pierce and then struck a vehicle in traffic at 12th Street and North Pierce. McFarland lost control of his car and struck a tree. He ran from the crash site and officers were unable to locate him.

The driver whose car was hit was uninjured. The Mason city police officer sustained minor injuries in the incident, according to the release.

MCPD now urges anyone with information about the incident or the whereabouts of McFarland to contact them.

The Mason City Police Department was assisted at the scene by the Iowa State Patrol and the Cerro Gordo County Sheriff's Office.

ICYMI: These are the North Iowa crime stories that made the news recently.

The Wednesday morning lockdown for West Hancock schools has ended, according to its website. The district has resumed normal operations.

A former Britt man will spend up to 12 years in prison after he pleaded guilty to possessing and transporting child pornography.

Officers want to remind the public that Medicare would never come to your house to collect old cards, and to be vigilant of suspicious calls. 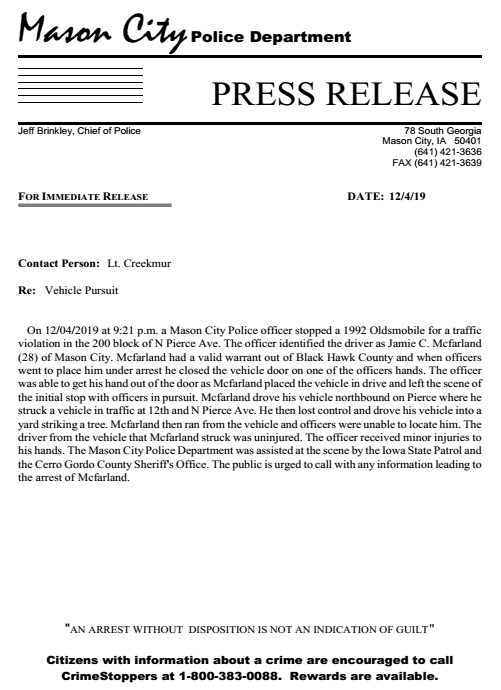