MASON CITY | A genealogy library that has served North Iowans for about four decades may need to find a new home by the end of September.

The North Central Iowa Genealogical Society (NCIGS), founded in 1972 as a nonprofit volunteer organization to help people research information about their family information, helps run that section of the library.

It has been housed in the Mason City Public Library since 1979.

Mark Suby, president of the NCIGS, is concerned about relocating more than 5,000 items in the collection. The organization has 65 to 70 members, and charges a $12 annual membership fee, he said.

Suby added the group serves not only Mason City, but also the North Iowa region and visitors nationwide, and even outside the country.

"We have absolutely nowhere else to go," Suby said about current relocation efforts. "We’re a regional center, and there’s seven or nine counties and we have people that come from different states and countries and we keep a log book (for people who come in)."

Discussions about relocating the genealogy club started earlier this year, according to Mason City Library Board minutes. At its most recent meeting in July, NCIGS Vice President Rod Hungerford and the club's librarian, Sandra Turner, presented the board with general information about NCIGS and its history in the library.

Turner, who has been a member of the club since the early 2000s, is optimistic about trying to find a new home for the materials. Some of those have been stored at her house in Eastbrooke.

She showed some of those documents — Cerro Gordo County naturalization records, World War II newspaper clippings and other records — to a Globe Gazette reporter and photographer Wednesday.

"It’s estimated 70 percent of the materials in genealogy are not on the internet," said Turner, who has a master's degree in library studies from the University of Denver. "Most of it is hidden in little libraries throughout the country."

"I’m concerned that if we do not find an appropriate place to move to, then we’re going to have to put the materials in storage," Turner added. "Whenever you lose a connection with your public, it’s never quite the same."

She added, however, that the library provided a rent-free space for about 40 years. It's the board and Library Director Mary Markwalter's decision, Turner said.

Shelly Schmit, who was president of the Mason City Library board until June 30, said via email "the Board was engaged in discussion of and provided Mary with direction to give timely notice to the Geological Society of North Iowa to vacate the space they occupy in the Mason City Public Library." She deferred further comments to current president John Henry and Markwalter.

It's unclear why library officials want the club to relocate. Suby provided notes from a meeting with Markwalter on May 10, where she claimed the NCIGS had no leadership and there isn't enough space in the library to keep the genealogy room.

Markwalter then sent a letter to Suby and NCIGS members telling them to vacate the library by Aug. 1. Since then, an extension has been granted until Sept. 30, according to Suby and Turner.

The letter cites "changing space utilization needs of the library" in the decision to evict the society. 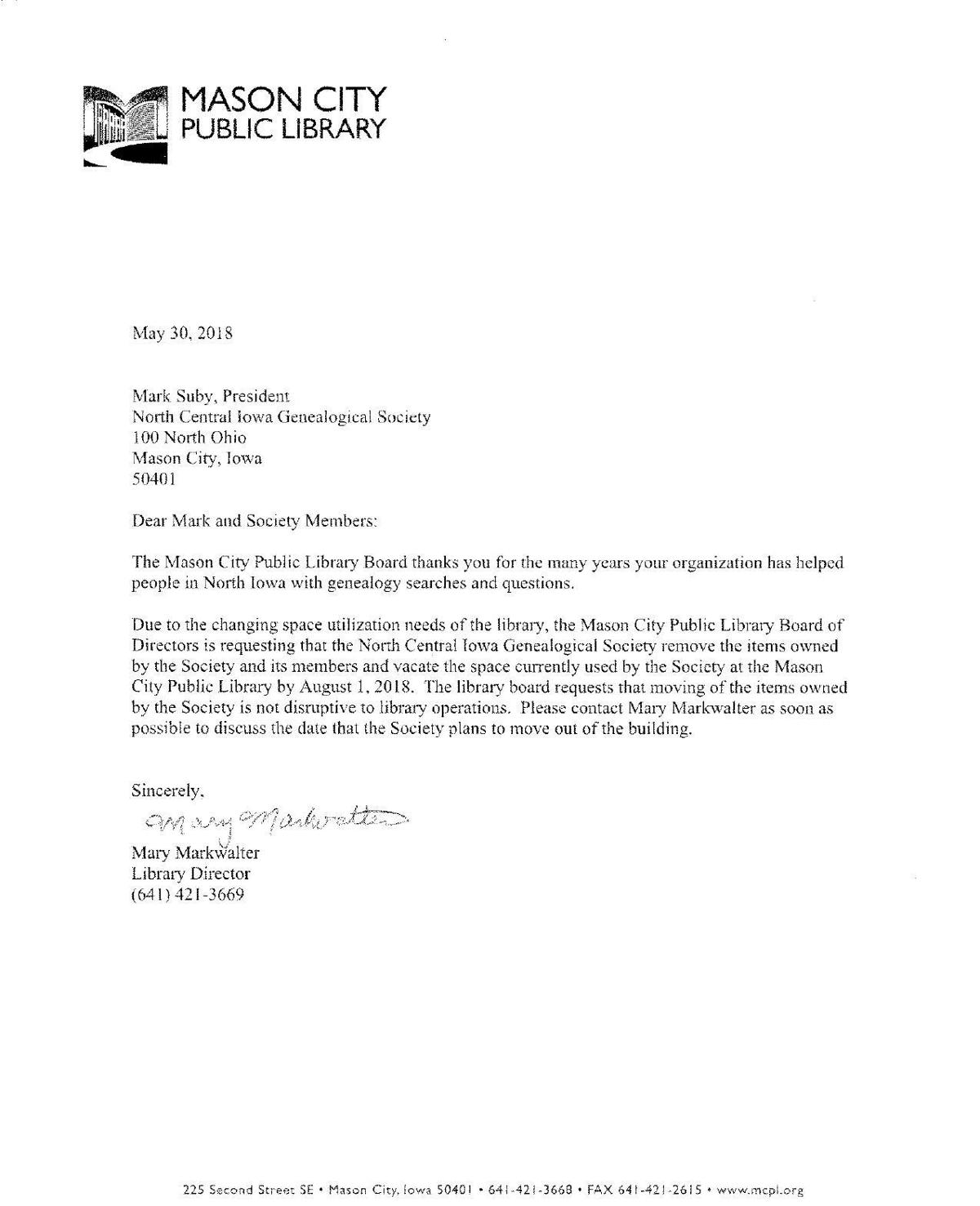 "The library board makes these decisions," she said.

Henry, the board president, could not be reached via email on Wednesday or Thursday.

Whatever happens with the genealogy library's records, multiple club members want them to remain easily accessible to the public.

That includes Dorothy Paul, who has been a member of NCIGS for nearly 30 years.

"If the library is under the category of 'good library', then they have a genealogy department," she said.

Letter: Materials belong at the library

We're calling on the Mason City Library Board to follow through and specifically outline why the North Central Iowa Genealogical Society, or N…

Genealogy Library will stay in Mason City Library until Sept. 30

MASON CITY | The North Iowa Genealogical Society (NCIGS) can stay in its current location at the Mason City Public Library through Sept. 30.

Two North Iowa projects – one seemingly never-ending, the other still early in the planning stages – offer the region an optimistic outlook.

'A sign of the times:' North Iowa genealogy club relocates in Mason City