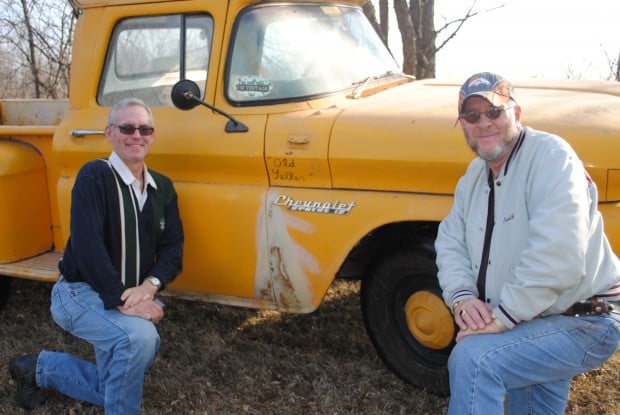 Pat Stork (left), the new owner of the 1960 Chevrolet Apache truck, and Ken Strand, the former owner, pose for a photo on the day the truck left Forest City. 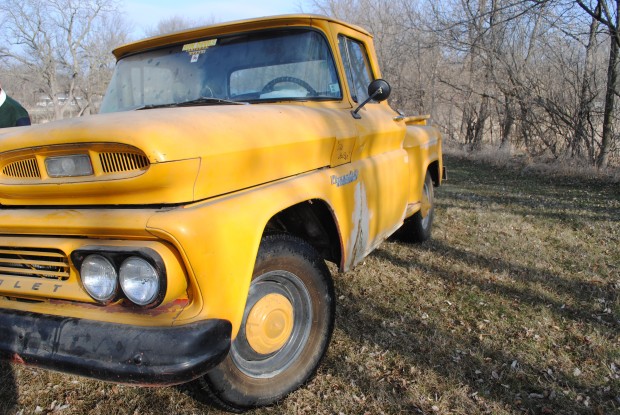 (The truck's grill is among the original parts that have weathered years of work in Forest City, and before that with the U.S. Forestry Service. The truck has been used in Forest City for many years and is known as "Old Yeller." The city painted the truck yellow to replace faded red paint. 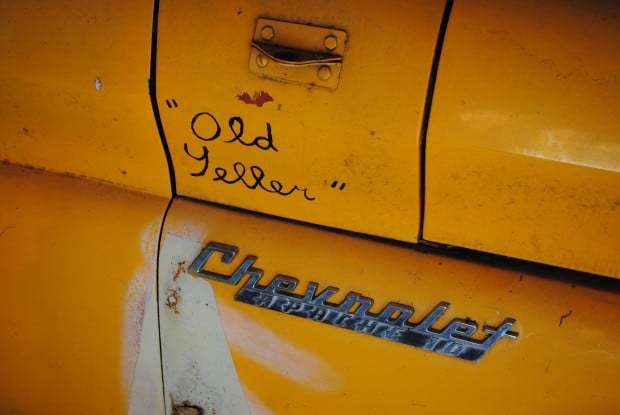 FOREST CITY — She probably weighs a couple of thousand pounds and won’t carry on a conversation, but Lori Severson says the yellow truck with black trim called “Old Yeller” is like a friend.

“It’s a buddy of the family,” Severson said. “Everytime I check on the machine shed, I tap her on the nose and say, ‘Hi Old Yeller, we haven’t left you.’ ”

Severson recalled one of her favorite trips in Old Yeller.

It was a mild early fall day several years ago.

She and boyfriend Ken Strand, the truck’s owner, had finished their work and suggested simultaneously that they should go for a ride.

They packed a lunch and left in Old Yeller, a 1960 Chevrolet Apache truck.

“It was just gorgeous,” Severson said of the day. “The leaves had just started to turn.”

The truck had been stored in Severson’s machine shed for several years, but now Strand has sold the truck.

Old Yeller took a trip recently as its new owner loaded it on a trailer and headed for home in Bancroft.

It’s been 20 years since new owner Pat Stork has driven a similar Chevy truck. Although it needs some work, it won’t be that long until he can drive Old Yeller.

“I’ll get it in running order this year,” Stork said.

The truck could run now, but the rear end is geared for a highway speed of 51 mph, Stork said.

“I need to get it more user friendly for today’s roads,” Stork said. “On today’s roads, I don’t know if it would be safe at 51 mph.”

Despite the years of work, the truck is in good shape.

“It’s a nice-looking truck,” Stork said as he watched Strand pull it out of the shed.

“It’s rare to find (so many) of the original parts,” Stork’s friend Steve Berte said of the truck.

“The headlights, the bevels, the grille, everything is original.”

While Severson and Strand are attached to the truck, it’s been part of Forest City’s history for many years, Strand said.

As much as anyone can recall, Old Yeller has been around Forest City since the 1960s. The city bought the truck from the U.S. Forestry Department for use at the airport. The Street Department used it after the airport no longer needed it.

“It was red when we got it,” city street Superintendent Barney Ruiter said. “A really faded red. We painted it yellow shortly after we got it.”

Although in good shape now and still clad in that goldish-yellow color, Old Yeller was built for work.

“She’s Plain Jane. Absolutely as Plain Jane as it gets,” Ruiter said.

“She has a three-speed transmission and a six-cylinder motor,” Ruiter said. “When we got it, we used it as a street department vehicle ... a utility truck.”

“Put a rack on it, put my ladder on it ... pulled the trailer with it,” Strand said.

For Stork, the truck is a kind of return to his childhood and younger days of driving a similar Chevy truck on the family farm.

“I was born and raised driving Chevys,” Stork said. “I will fix it up and bring back part of my memories.”

His plan is to make the truck functional and not to add a lot of extra accessories or street-rod type style to it.

Rae Yost is editor of the Forest City Summit, a Lee Enterprises newspaper.

A structure fire in a three-story house caused more than $200,000 worth of damage, but no one was hurt.

Pat Stork (left), the new owner of the 1960 Chevrolet Apache truck, and Ken Strand, the former owner, pose for a photo on the day the truck left Forest City.

(The truck's grill is among the original parts that have weathered years of work in Forest City, and before that with the U.S. Forestry Service. The truck has been used in Forest City for many years and is known as "Old Yeller." The city painted the truck yellow to replace faded red paint.