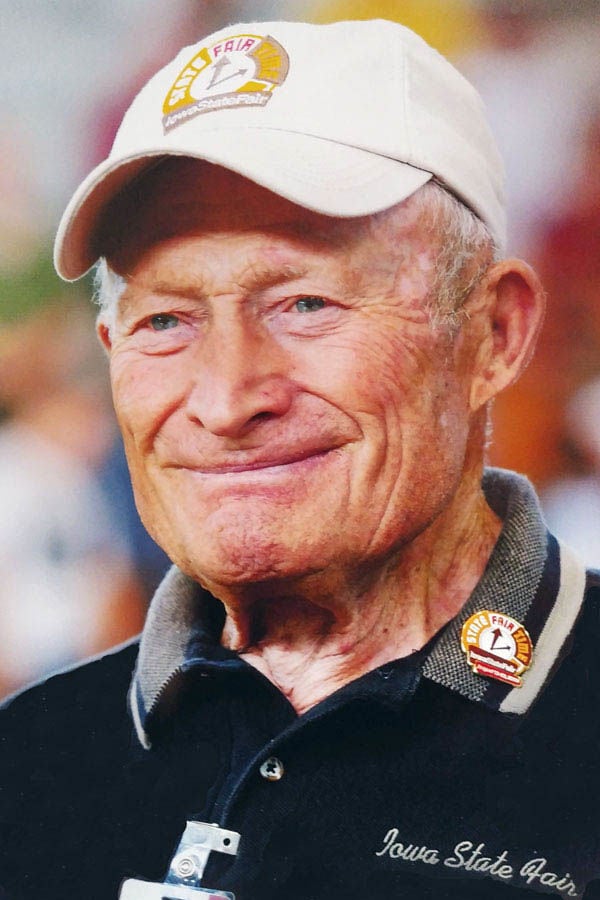 Funeral services will be held 10:30 A.M., Friday, April 9, 2021 at Peace Reformed Church south of Garner with Rev. Brian Lund officiating. The service will be livestreamed on the Cataldo Funeral Home Facebook page. Burial will be in the church cemetery.

Visitation will be held from 4:00 to 7:00 P.M., Thursday at Cataldo Funeral Chapel, 160 E. 4th St., Garner and will resume one hour prior to services at the church.

Donald Edward Greiman, son of Addis and Ruth (Schipull) Greiman, was born September 5, 1926 on the family farm south of Garner. He graduated from Garner High School in 1944 where he participated in baseball, basketball, football, Men's Glee Club, and Mixed Chorus. Don was a 4-H and FFA member and received the Iowa FFA Star Farmer Award. He graduated from Iowa State University in 1952 and majored in Animal Science. Don was a member of Alpha Zeta, Block and Bridle, FarmHouse Fraternity, ISU's Livestock and Meats Judging teams, and received Cardinal Key honors. After graduation, he served in the Air Force as a 2nd Lieutenant and was stationed at Bolling Air Force Base, Washington D.C. On June 6, 1953, he married Yvonne Rasmussen and they farmed and raised purebred Angus cattle south of Garner with his father Addis and brother Cliff. Their Angus herd was recognized nationally for its outstanding quality, and Don judged many county, state, and national cattle shows. He was very proud to see his grandsons be the 5th generation to raise Angus cattle. He enjoyed working with people, promoting organizations and initiatives, and making a notable difference serving on multiple boards. Don was a member of the Garner Peace Reformed Church where he served as a deacon, elder, and Sunday school teacher, and was treasurer of the Reformed Church in the United States. He provided leadership to form the Certified Angus Beef Program, Hancock County Beef Producers, and Iowa Beef Breeds Council, and served on many boards including the American Angus Association, Garner and Klemme Cooperatives, and Iowa Cooperative Grain Dealers. He was a 4-H club leader for 20 years and most recently became a Garner Rotary Club member. Don was a loyal Iowa State supporter, had TRUFAN as his license plate, served as president of the Alumni Association and board member of the Athletic Council, and was a founder of the North Iowa Cyclone Club. For 64 years, he and Yvonne were season ticket holders for football and basketball and were recipients of Cy's Favorite Alum award in 2017. Another love of Don's was the Iowa State Fair. He served as a board member for 44 years, the longest tenure in history, and was president two times. He was proud of the Board's efforts to continually improve the fair experience and was instrumental in forming the Blue-Ribbon Foundation that raises funds to help preserve and improve the fairgrounds. He also was a long-time board member of the North Iowa Fair.

He was preceded in death by his parents, Addis and Ruth Greiman; and his brother, Cliff Greiman and his wife, Dona. CATALDO FUNERAL HOME 641-923-2841 www.cataldofuneralhome.com