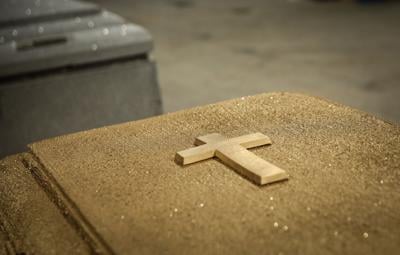 Daniel Clarke has spent 44 years making death a part of his life.

When he started with the local branch of the Wilbert Burial Vault Company, a non-descript light-brown building on an industrial stretch of Eighth Street Southwest in Mason City, Clarke was only in his early 20s. He took the job in part because it came recommended from a friend who worked there at the time and because he needed something that paid well to provide for his new wife.

Clarke stuck with it because of the sense of purpose the job offered.

"I liked helping people out and making sure their last request was taken care of and the family members were all happy with whatever I did out there. I just try to do my best for them," he said.

In the decades since Clarke first started with Wilbert, which has operated in the U.S. since 1880 and has four plants in Iowa, he's been the one of the last ones to see the casket lowered for children, Navy SEALs and even his wife. When he eventually goes, Clarke said he intends to be buried in a high-strength concrete, single-reinforced Venetian vault akin to his wife's.

As Clarke speaks about that inevitability, in a Chicago-style accent that's long on the letters "a" and "o," he doesn't register as weary. Even with something as heavy as having to preside over the interment of a child, Clarke offers context.

Clarke is semi-retired from Wilbert now but still helps out plant manager Daniel Bowers however he can.

Bowers, 34, hasn't been there two years but already has picked up some of the same perspective that Clarke has about making a product that's an integral part of the burial process.

"When I first started, it seemed kind of tough to see families dealing with such a hard time but you do see a lot of togetherness and support for each other," Bowers said. He recalled that a few days ago a family was actually out at the cemetery just to see the vault sealed up. "That day, in particular, was more difficult," Bowers admitted.

Often, the most difficult part of the work is some of the more technical stuff.

North Iowa Nitty Gritty is a new series from the Globe Gazette highlighting interesting and unusual jobs around North Iowa.

Know someone in the area with a particularly nitty, gritty job? Email Jared.McNett@globegazette.com and their work could be featured in a subsequent installment of our series.

Bowers, Clarke and their colleague Johnathon Rowe, who has been there a little less than a year and doesn't have quite as many stories as the other two, all acknowledged that hillside cemeteries are the toughest places to do work in.

"Especially one where grave plots are closer together," Clarke said.

Bowers noted that the elements can be brutal to deal with as well. According to him, cold days and rainy days are the toughest to make it through. And the days when machinery breaks down or graves start to cave in a bit.

If there's any downtime to be found during work, Bowers has tried in the past to take photos of the graveyards he visits (he studied photography in college). That happens a little less now because Bowers has already photographed so many cemeteries in the area he covers.

When Bowers wants to fully unwind from the work, he said he spends as much time with his family as possible. Watching his kids play with Play-Doh is more than enough of a source of joy for him. He said that his children haven't gone with him on many trips to the cemetery but that they do think the work is a bit strange. His wife has some context though: She previously worked for Hogan-Bremer-Moore as a licensed funeral director.

"She saw a job come up and thought I’d be perfect for it," Bowers said.

According to Bowers, exactly how many vaults are made in a week depends on how many services are scheduled in Wilbert's coverage area which can sometimes stretch up to Minnesota and as far east in Iowa as Lansing on the Mississippi River.

The crew aims to pour seven vaults in a day which takes two or three hours. The pour itself consists of concrete powder, chip rock and sand.

It takes another 12 or 16 hours for the burial vaults to set once they've been poured. And then the vaults might be in the warehouse for 30 days before they're sent out. Prior to departure, they can be stylized for specific people being buried. In a given month, Bowers figures that the crew makes 40 or 50 vaults.

"If we don’t keep up on production, it can make things pretty difficult," Bowers said. "With the way COVID has been, production has been difficult with all the services we’re doing." Per Clarke, an eight or nine funeral day has happened before. That's when the work can really feel ratcheted up.

But again, even the most difficult moments for Bowers, Clarke and Rowe are tempered by context, perspective and time. Given long enough, some strange things can make more sense.

When Clarke was asked about whether or not it's eerie to open a grave back up, which he has had to do a few times to help with autopsies, he simply responded: "No. Don't bother me none."

Early into his time with Wilbert, Bowers had a job in West Union, which is the outer limits of where the crew goes on a more-regular basis. While chatting with a gravedigger, Bowers got a piece of advice that's stuck with him ever since.

"Just remember, no matter what happens in the day, we bury our problems here."

Iowa Mourns: Around the state

Barbara Sherman was a tour guide at the Czech Museum

When Barbara Jean Sherman first met Jerome George Sherman, a military man with orders to post in Fairbanks, Alaska, she knew there was a spark. But she couldn’t have known how their love would bloom across 3,000 miles of land and sea — especially back in the 1950s.

Nobody made peanut butter frosting like Barbara McGrane-Brennan. At least, that's what her daughter, Tonya Brennan, says.

Bryce Wilson always had rhythm in his heart.

Jackie Lake left her Oklahoma home on a quintessential autumn day in October 1987, heading northeast to Iowa to meet this new friend her brother kept raving about.

Jim Miller, a talented woodworker, died one day shy of 65

Deb Miller first started talking to Jim Miller Jr. from the backseat of his taxi cab.

Mel Stahmer was a beloved mailman in Coralville

Ed McCliment was a University of Iowa physics professor

In Iowa City’s Hickory Trail neighborhood, it was common knowledge that Ed McCliment took a morning stroll to a nearby convenience store and returned with a cup of coffee in one hand and a fresh copy of the New York Times in the other. On the way back, his eyes would be transfixed on the newsprint as he walked — no need to watch his feet along the well-trod route that always carried him home.

Patrick C. Parks and aviation were a match made in the heavens.

Katie Jacobs lived where she was born, farming most of her life

Walt Bussey kept his Aunt Katie Jacobs' leather work boots when she moved into a nursing home eight years ago, hoping she would one day return to the family farm to wear them again.

Mary “Kitty” Rolfes loved to gab, usually about her family.

Norma Jean Perry loved being a grandmother so much that she didn’t stop with her own eight grandchildren.

Stan Patrick lived, and died, with the Chicago Cubs by his side

For someone who loved practical jokes as much as Edith Elida Anderson, April 1 took strategy.

If there was ever a cause for celebration — from St. Patrick’s Day to birthdays to retirements — Jim Orvis had a greeting card for it.

David Worthington 'was a fighter all the way'

David Worthington never backed down from a fight.

Wiuca Iddi Wiuca spent most of his life in limbo, searching for a place to call home.

Lola Nelson had a green thumb, often giving away bulbs

Lola Nelson's green thumb earned her a reputation in the small town of Ollie.

Marilyn Prouty, an only child, loved having a big family

After growing up an only child, Marilyn Elizabeth Prouty knew she wanted a big family — a dozen children, to be specific.

When Amy Gardner was younger, she was, admittedly, a troublemaker. Her transgressions were generally kids’ stuff, like taking her parents' car for a joyride or talking back to a teacher.

Ken Baxa had gentle brown eyes and a huge heart

You’ll have to excuse Janet Baxa’s laughs when she talks about meeting her husband, Kenneth "Ken" Baxa.

Therese Harney was a Johnson County Hall of Fame bowler

Therese J. Harney spent hours and hours in bowling alleys trying out grips, practicing approaches and watching her ball ramble down the lane and smash into the pins — hoping, of course, she would knock them all down.

With a swing set, a sandbox, a tetherball court and a little red playhouse built to look like a train engine, Lucille Dixon Herndon ensured her family’s yard was a childhood dream made real.

Regina Thiry was an expert quilter.

Carroll White was a helper from childhood to age 100

Even dogs could tell Daryle Jass was a good guy.

Don Lole cultivated such strong, deep roots in the small, rural town of Villachuato, Mexico, that he became a living landmark.

A Mason City home received heavy damage to its garage after a fire broke out on Monday.

When the new budget for Floyd County rolls around on July 1 of this year, there's a good chance that at least one number among hundreds will stay the same: supervisor salaries.

Tuesday's registrations were solely through the phone, but CG Public Health is switching back to both online and phone next Monday morning. 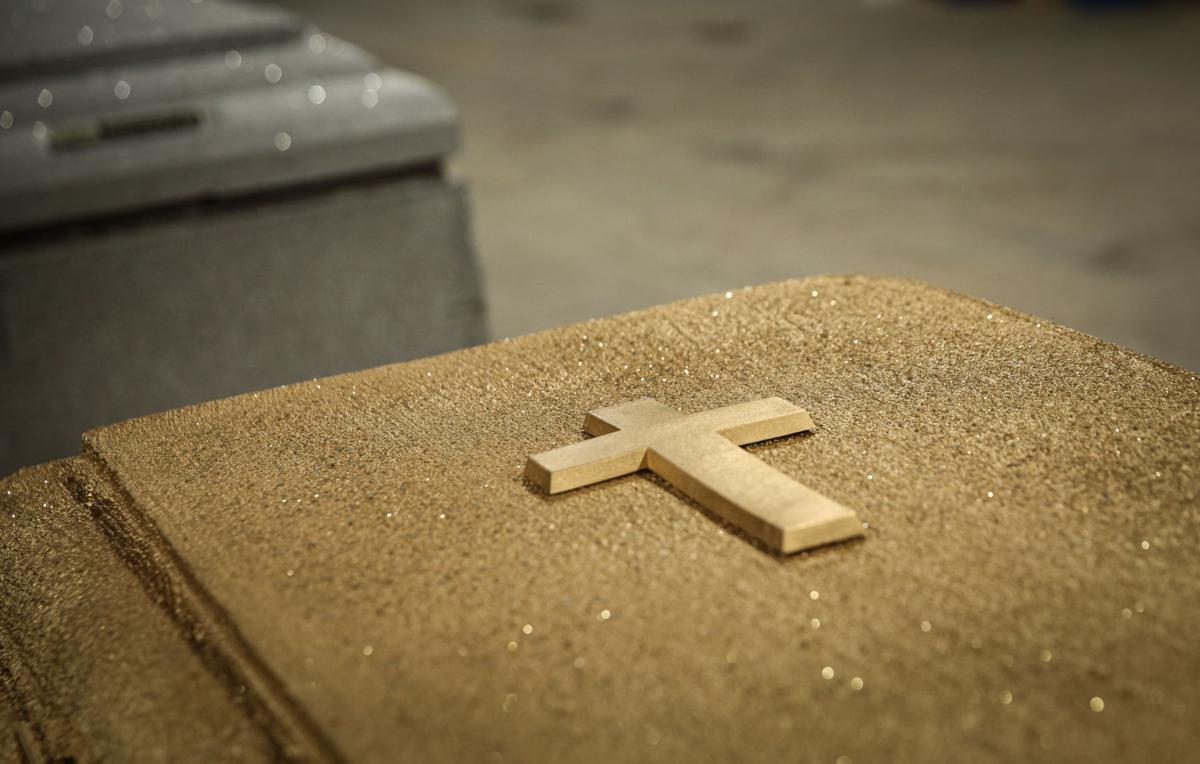 Once an order is placed, depending on the requested style, burial vaults are fitted with an air-lock seal, and hand painted and adorned to customers' specifications. 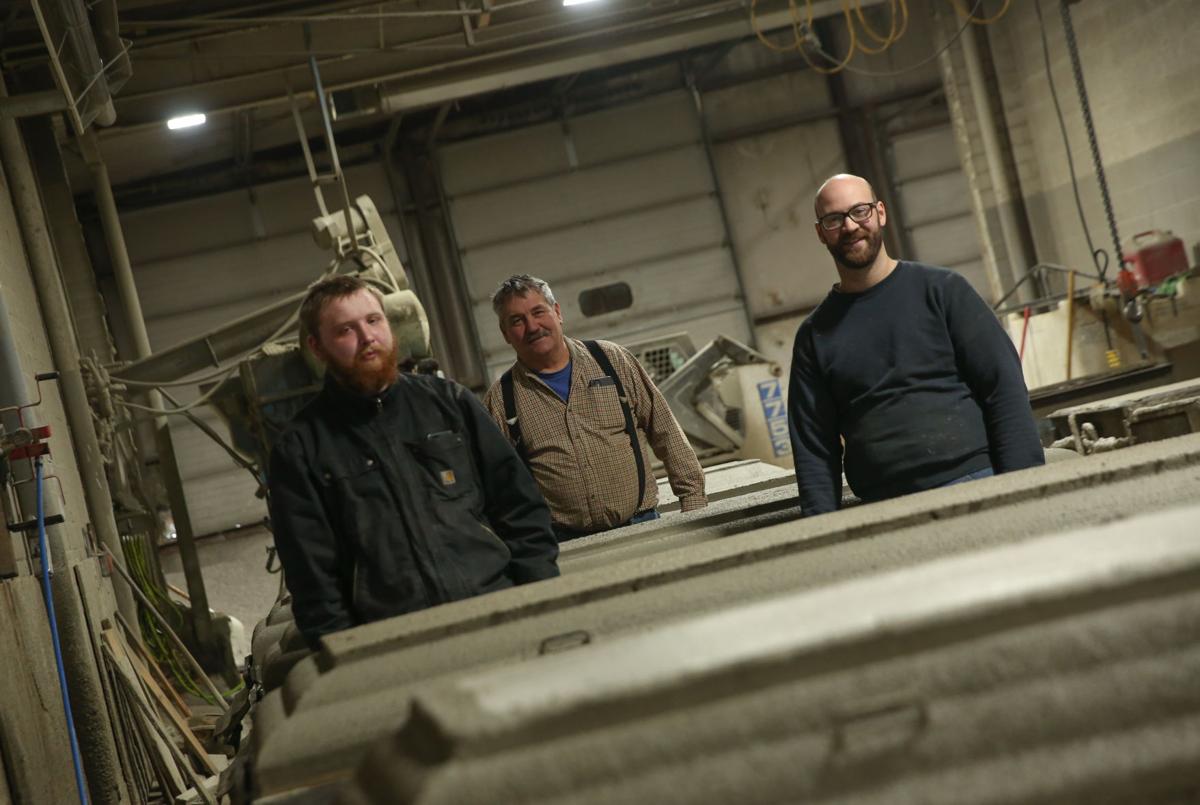 From left, Johnathon Rowe, Daniel Clarke and Dan Bowers stand between vault tops that were poured earlier in the day. 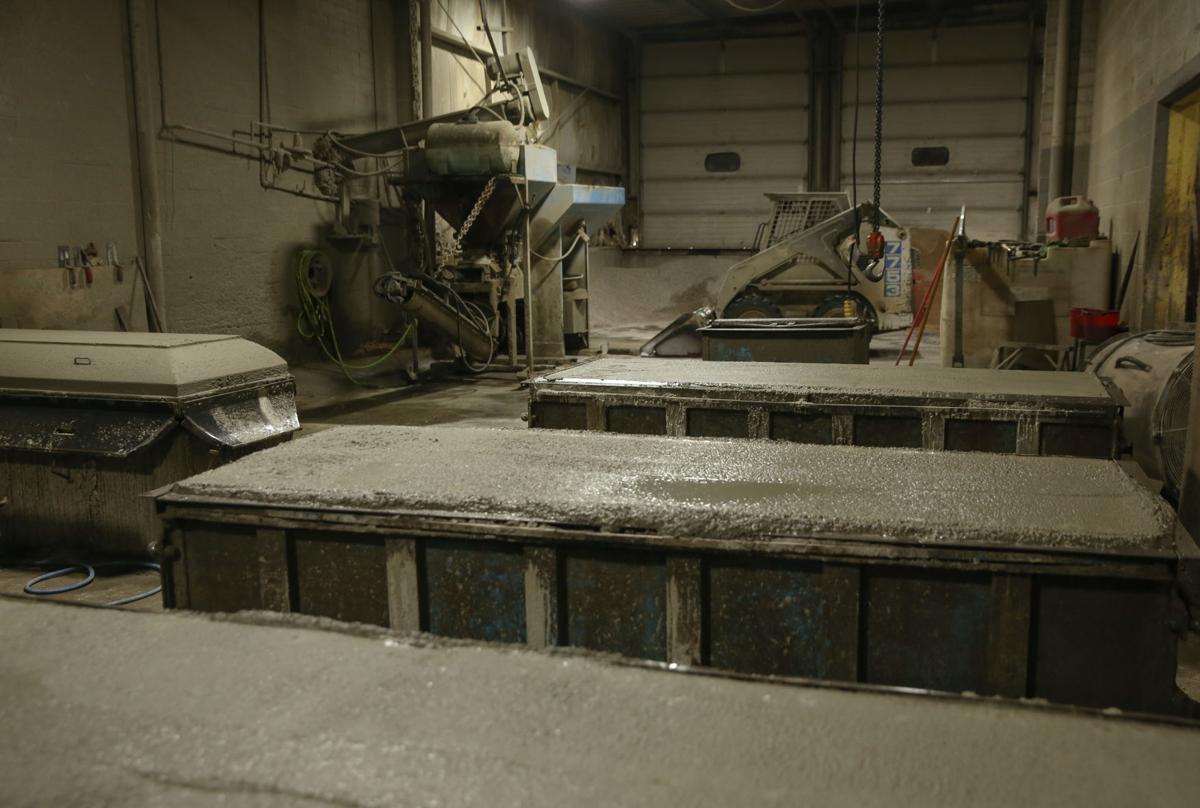 Cement sets up in burial vault molds. A mechanical chain hoist is used to assist in moving the casts which weight around one ton each. 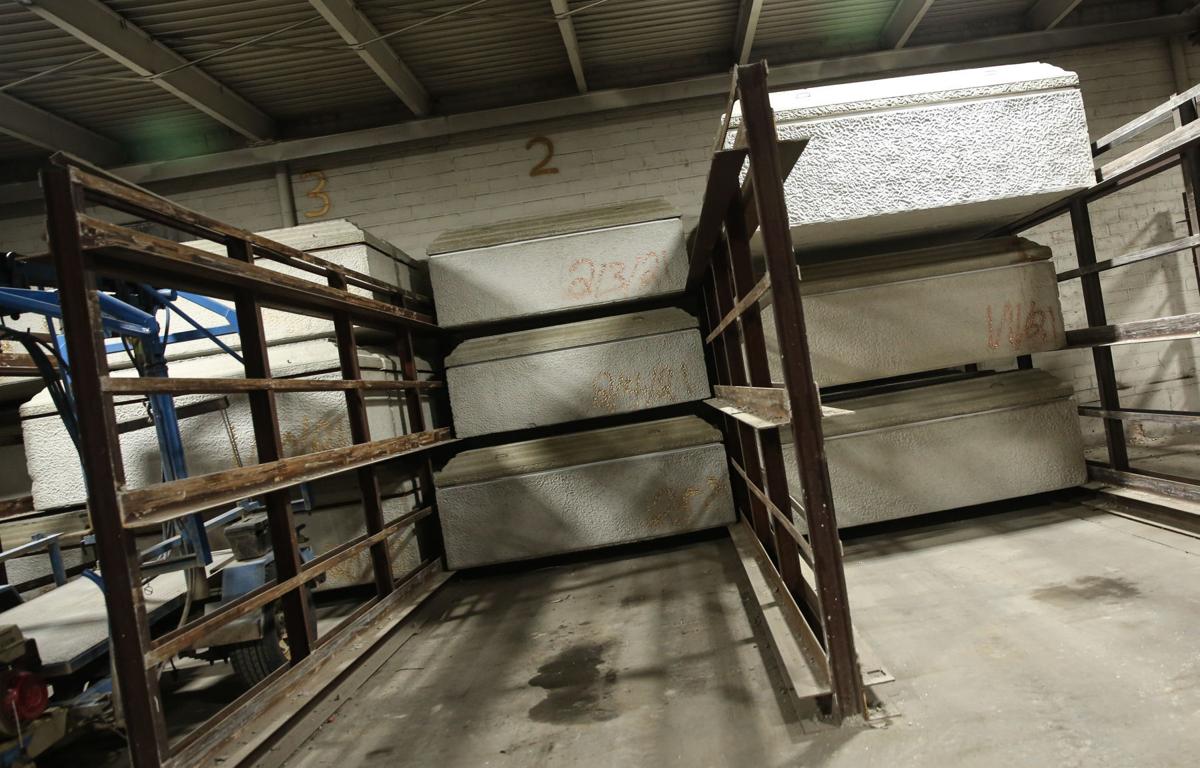 Once the vault is cast, it's moved to a storage rack to fully cure for up to 30 days.