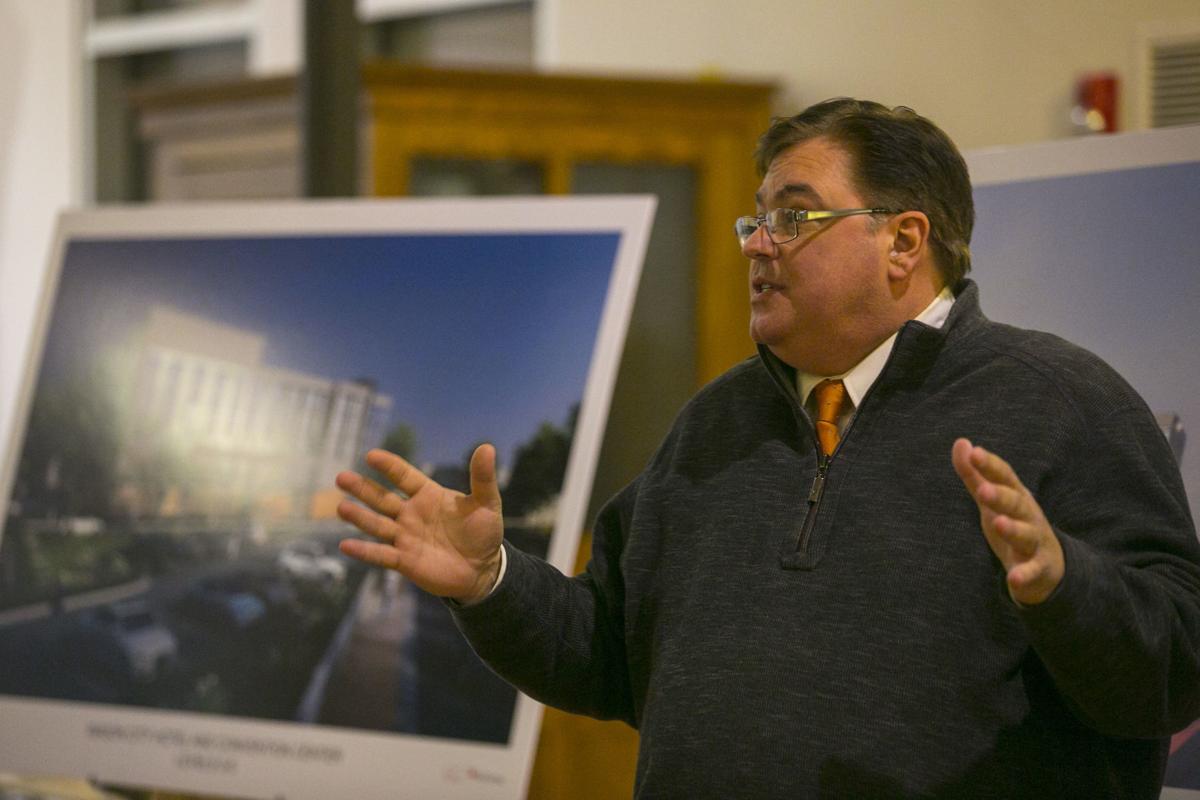 That’s what a 6-0 unanimous vote on approving a purchase, sale and development agreement with Gatehouse Capital signaled.

The decision, reached by Mason City Council at Tuesday night’s two-hour meeting, means that Gatehouse can now move forward on putting a multi-million dollar hotel in downtown Mason City as a part of the River City Renaissance project. Planning can shift to doing.

Though the agreement received criticism from two members of the public, other comments were more mixed-to-positive.

Representatives for The Music Man Square, Visit Mason City and the Mason City Chamber of Commerce all voiced approval for the plan.

Dalena Barz, of The Music Man Square, said that a development deal with Gatehouse for the hotel would be an opportunity to turn around from the blight of Southbridge Mall.

Visit Mason City's Lindsey James argued that putting a hotel in town would help to increase Mason City's potential as a tourism destination.

And Robin Anderson of the Chamber warned that the cost of doing nothing would be far more harmful.

"We should all be excited about this," Mason City Councilman John Lee said.

He ventured that the agreement and the development it could bear could last long past the initial project.

"This is something that can anchor this town for 20 years," Lee said.

Even Councilman Joshua Masson, who expressed the clearest reservations about the project at multiple turns, ultimately voted for the agreement and pointed out that the incentive to succeed is strong.

"Gatehouse will make a lot more money with a successful project than a failed one," he said.

The hotel is crucial to the River City Renaissance project because $10 million in private funding is a prerequisite for the city to qualify for a state Downtown Reinvestment District, which comes with a financial assistance package.

The River City Renaissance is a $39 million project that includes the hotel plans as well as a multi-purpose arena and related components.

In February 2018, the Iowa Economic Development Authority Board approved a maximum benefit amount of $9,162,600.

One issue that was raised, more than once, even by those who ultimately favored the plan, was the need for Gatehouse to secure financing.

Gatehouse representative David Rachie clarified that his company wouldn't have been able to move until the city gave the go ahead.

"We can't pursue financing until the city says we have a deal," he said.

When indirectly asked about that, whether it was a good deal, Mason City Finance Director Kevin Jacobson stood pat that he wouldn't offer his personal opinion but did state that he wasn't sure where the rest of the money would be coming from.

In total, the hotel project will cost about $24 million with financing through a public-private partnership.

And that partnership was focal point of criticism that arose during the meeting.

At one point, the city had to provide weekly updates to IEDA staff until construction started on the downtown hotel. It also had to submit a document to the IEDA by Sept. 17, 2018, that G8, the developer at the time, had either secured construction financing for the project or that it was in default on one or more of its provisions.

With G8 being dropped from the project for allegedly defaulting (a lawsuit against the city is currently underway) and a final deal with new developer Gatehouse still not inked, Mason City officials were able to set a new deadline for the construction financing commitment of Sept. 30, 2019.

There are time commitments Gatehouse will need to make as well.

By April 1, 2020, at the absolute latest, the real estate transfer between Mason City and Gatehouse will need to happen.

On or before July 1, 2020, construction on the hotel property and The Music Man Square must begin (barring “unavoidable delays”).

Improvements would need to be finished no later than December 2023.

For six-plus years, there have been plans to put a hotel in downtown Mason City.

Then, the Texas-based Gatehouse entered into the picture.

Gatehouse, who has been working for 20-plus years to deliver hotels to cities across the country, made an offer to build a hotel in the south parking lot of Southbridge Mall and connect it with a skywalk to The Music Man Square.

That plan initially stalled thanks to delays, multiple votes, the threat of a lawsuit and the re-emergence of G8 which was still unable to execute on its vision.

Since Gatehouse returned, after a second delay from G8, its plan has shifted slightly (mostly around what will happen with additions and improvements to The Music Man Square) but the financing issue has stayed firm.

Once the deal was approved by council, Rachie said that he was excited at the prospect of getting started soon and that he was looking foward to eventually wrapping things up.

But in that optimism there was a tinge of realism as well.

"This is more of a beginning than an end."

The Music Man Square's looking at fundraising options as it and the city wait for the River City Renaissance to wrap. One source might end up being from the city itself.

Months after a deal with Gatehouse Capital was finalized, a potential hotel flag for the River City Renaissance has been found.

Looking back: The 2010s in government, politics

Construction was to begin by July 1 but that's no longer happening.

It's a question of balance.

A key piece of what has been more than half a decade of planning comes into sharper relief at the Mason City Council meeting on Tuesday night.

How do the Gatehouse River City Renaissance proposals stack up

On July 23, the Mason City Council will meet and hold a public hearing and evaluation of a purchase, sale and development agreement with Gateh…

Although Mason City Community Theatre’s newest production “Mary’s Team" takes place during the 2016 World Series, it's about much more than baseball. It premieres Thursday.

A smaller but long-discussed component of the River City Renaissance in Mason City is underway now thanks to contract approval from the city council.

Southbridge Mall will be getting a new tenant in the not too distant future.