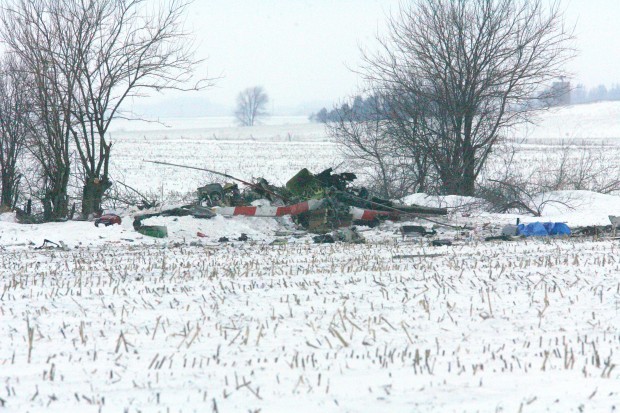 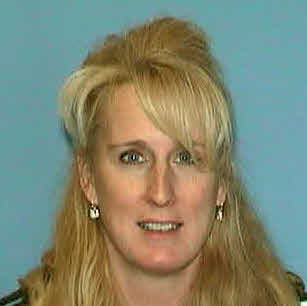 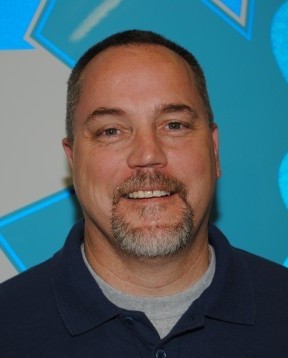 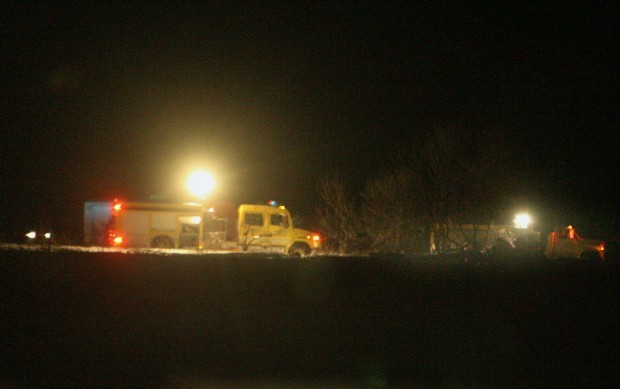 Fire trucks near the scene of a helicopter crash northwest of Ventura late Wednesday night. 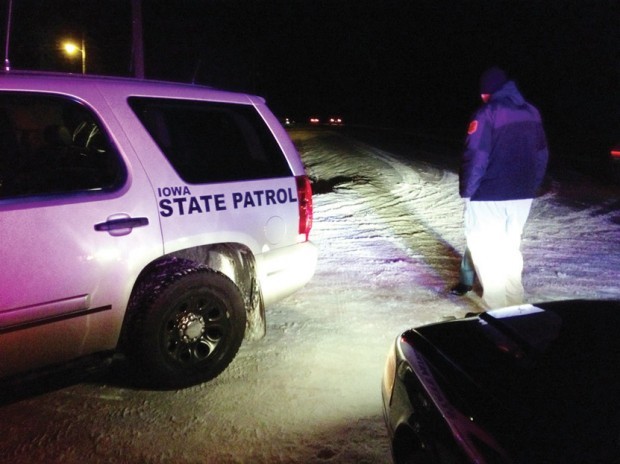 An Iowa State Patrol trooper blocks access to a road leading to the crash site where the Mercy Medical Center-North Iowa Air Med helicopter apparently went down about 9 p.m. Wednesday. 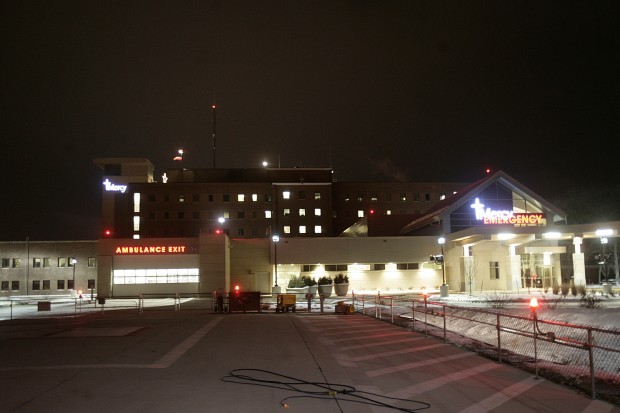 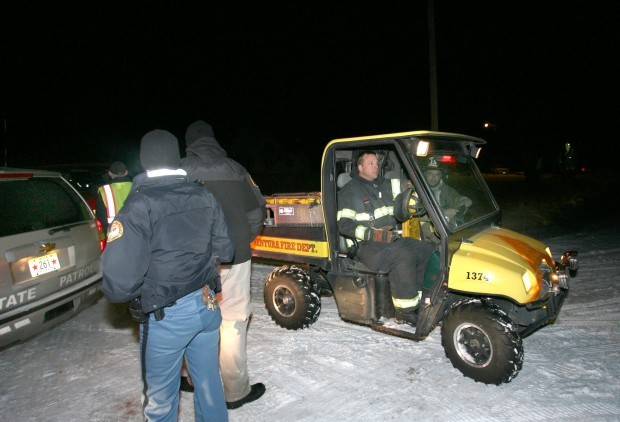 Emergency workers at 260th Street and Balsam Ave., north of Ventura, late Wednesday night near the scene of a helicopter crash.. 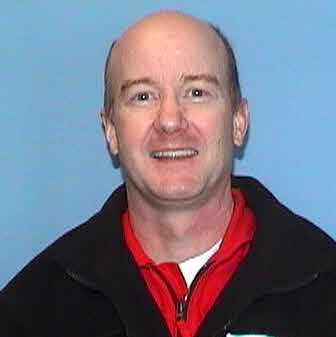 MASON CITY — Aviation officials were continuing Thursday with their investigation into the cause of a crash of a Mercy Air Med helicopter that killed three people Wednesday night in western Cerro Gordo County.

The crash occurred about 9 p.m. Wednesday a mile or two north of Ventura the Cerro Gordo County Sheriff’s Department reported.

It resulted in the deaths of all three on board: flight nurse Shelly Lair-Langenbau, 44, Hanlontown; paramedic Russell Piehl, 48, Forest City, and pilot Gene Grell, 53, a Med-Trans employee for whom no address was immediately available.

The crash site was still being secured by the Cerro Gordo County Sheriff’s Department Thursday, Sheriff Kevin Pals reported. Officials of the Federal Aviation Administration were at the scene.

“We are still waiting for the NTSB (National Transportation Safety Board) to arrive at the scene to conduct their investigation,” Pals said at 2 p.m.

A Med-Trans investigative team was also assisting in the investigation.

“We’re not going to speculate about what unfolded,” Buttrell said. “The investigation will tell.”

The helicopter was en route to Emmetsburg to pick up a patient. The patient was later transferred to Mercy-North Iowa by ground ambulance, the hospital reported.

Mercy President and CEO Dan Varnum said it was “a very tragic time for Mercy-North Iowa, the North Iowa community and the Iowa health care community.”

“Our thoughts now go out to our fallen associates and their colleagues. They were selfless health care workers who gave their lives for the health care of others.”

Lair-Langenbau has been a nurse at Mercy-North Iowa for 15 years, said Dr. Matt Schiller, Mercy medical director of emergency services.

She was working in the hospital emergency department in October 1999 when the flight program was established and was accepted into the program at that time, Schiller said.

Piehl had been a Mercy employee since 2007, all of it with the flight program.

Grell, the pilot, had been an employee of Med-Trans since September 2012. He was based at Mason City and was looking for housing in the area, Buttrell said.

Buttrell, who came in from Dallas for the morning press conference, said Grell had more than 2,800 hours of flight time.

“He was very well thought-of by his colleagues. He was a very diligent, checklist-oriented individual.”

The helicopter had been in the air only a short time when the accident occurred, Buttrell said.

“They were heading in the right direction at the right altitude.”

He would not comment on the weather at the time of the accident and whether it could have been a factor in the crash, but said the flight crew would have made sure there was no icing on the helicopter prior to takeoff.

“It wasn’t being detected by radar because it was so light,” he said. “It was very patchy.”

“I know there was some drizzle around the area,” Frederick said. “I can’t say it was there.”

Buttrell said there was no distress signal from the helicopter prior to the crash.

The helicopter was equipped with the latest in helicopter EMS technology, including night vision goggles, a terrain warning system and a satellite tracking system, Buttrell said.

Although it was not equipped with a “black box,” its satellite tracking system, which provides positioning and aircraft information, would be used in the investigation he said.

“We’re very proud of this program,” Buttrell said. “Safety is at the forefront of all our endeavors.”

He said all three of the crew must agree on whether to embark on any given flight.

The Bell 407 helicopter started service in April 2011, Buttrell said. It had been through all its scheduled and unscheduled maintenance and was compliant with the company’s safety standards for flying.

Varnum said the hospital is “very committed” to the flight program, but will be down for “a little while” following Wednesday’s accident.

Mercy-North Iowa entered into partnership with Med-Trans to provide helicopter service in February 2011.

Mercy-North Iowa averages 500 Air Med flights a year. This is the first helicopter accident the hospital has experienced.

Med-Trans has experienced only one other accident, in 2004, when the company was under different ownership, Buttrell said.

“We have people we really love and care about on the team and they’re hurting,” he said.

Members of Mercy-North Iowa’s Spiritual Care Department and counselors have been available to provide support to employees, Varnum said.

Mercy Air Med is used to transport patients who require a high level of care from one health facility to another or from a trauma scene. It does not fly in inclement weather or when receiving routine maintenance, the hospital reported.

Funeral arrangements for Shelly “Shell” Lair-Langenbau are incomplete. Major Erickson Funeral Home and Crematory of Mason City is in charge of arrangements.

Funeral arrangements are also incomplete for Russell Piehl. Petersen Lund Funeral Home of Forest City is in charge of arrangements.

Killed in the crash were: Shelly Lair-Langenbau, 44, Hanlontown; paramedic Russell Piehl, 48, Forest City, and pilot Gene Grell, 53, an employee of Med-Trans since September 2012. A hometown for Grell was not yet available.

“They were each selfless health care professionals devoted to the delivery of emergency medical care," Mercy CEO Dan Varnum said in a statement. "While they fulfilled significant duties, they played a greater role as our neighbors and friends.”

MASON CITY — The North Iowa caregivers who died in Wednesday’s medical helicopter crash near Ventura were loved not only by family, but by col…

'On Eagles Wings' -- the service for flight nurse Shell Lair-Langenbau

Flight nurse and paramedic lauded by their associates

(Editor’s note: Noel Marzen interviewed Russ Piehl in April 2011 when she was a reporter for LOGOS, the student newspaper at North Iowa Area C…

Fire trucks near the scene of a helicopter crash northwest of Ventura late Wednesday night.

An Iowa State Patrol trooper blocks access to a road leading to the crash site where the Mercy Medical Center-North Iowa Air Med helicopter apparently went down about 9 p.m. Wednesday.

Emergency workers at 260th Street and Balsam Ave., north of Ventura, late Wednesday night near the scene of a helicopter crash..