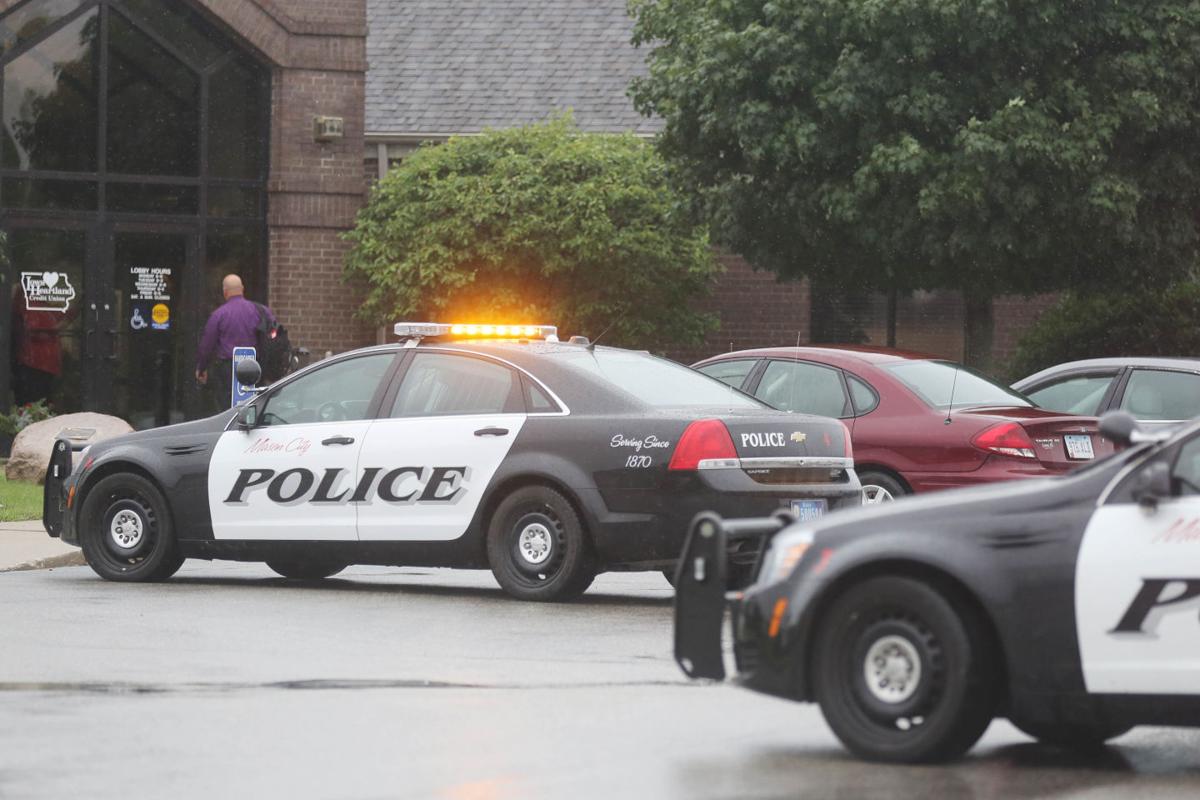 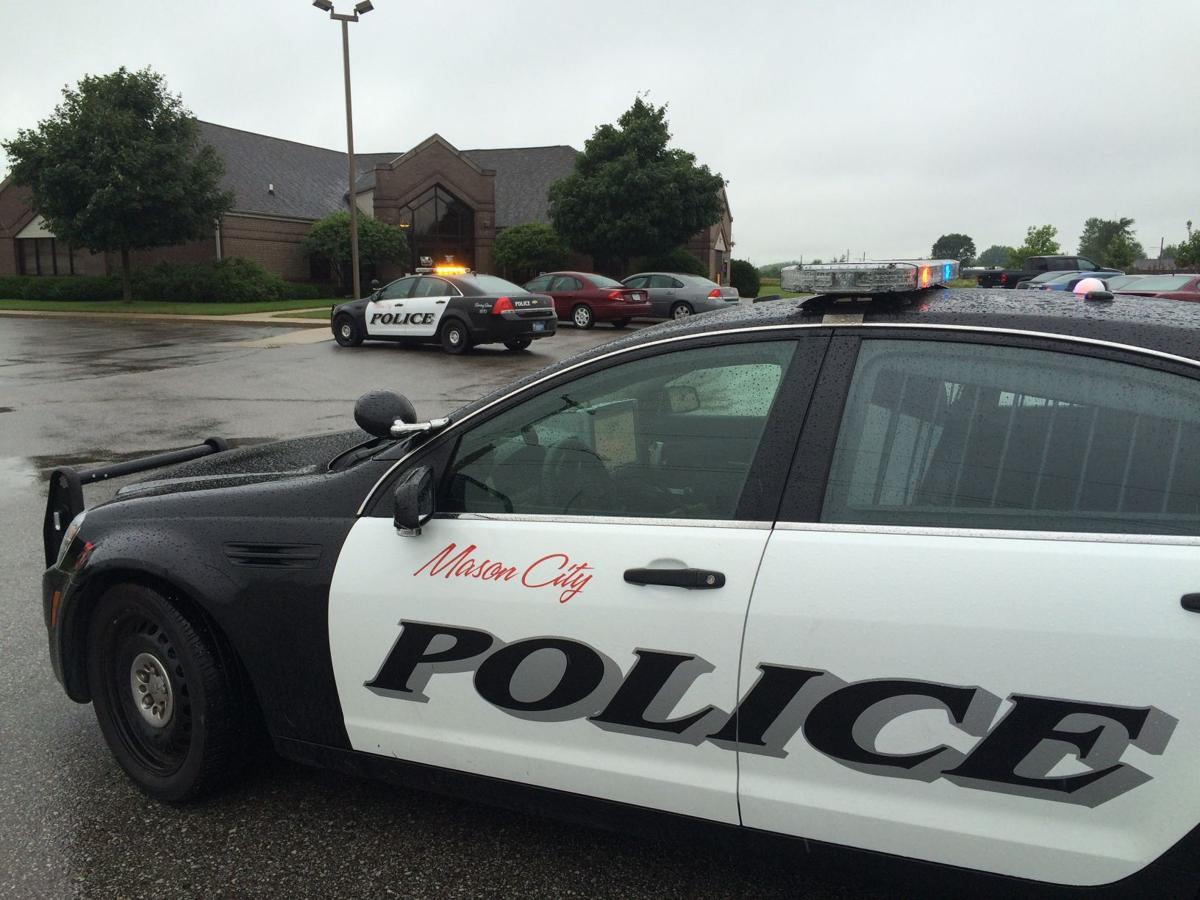 A police car parked in front of Iowa Heartland Credit Union on Tuesday. Officials were still searching on Wednesday for a man who robbed the business at gunpoint. 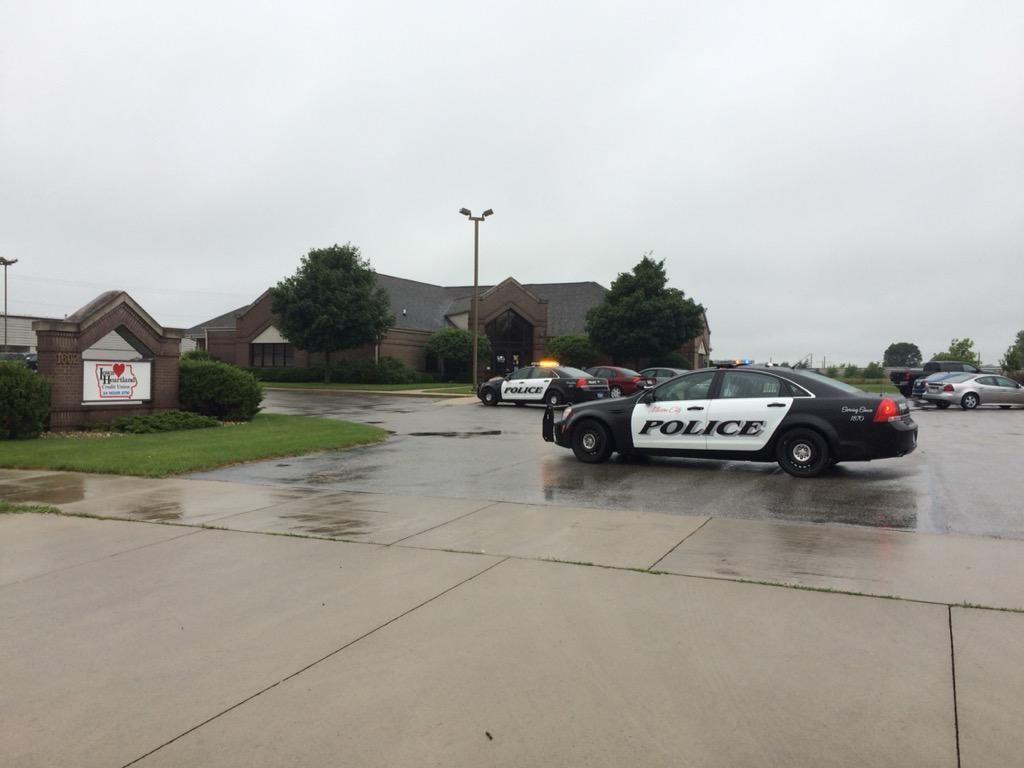 Police respond to a report of a robbery Tuesday at Iowa Heartland Community Credit Union.

Hockenson, at her desk at a nearby business, and a colleague watched as the officers slowly approached the credit union.

Then things got interesting.

“We didn’t think anything of it at first,” Hockenson said. “And then we saw the guns.”

One of the Mason City police officers was armed with a rifle. The other was reaching for a handgun in his holster, Hockenson said.

The officers were investigating an armed robbery at the credit union, 1602 S. Monroe Ave.

No arrests had been made as of Wednesday morning.

Police would not say what kind of gun the man showed credit union employees.

He wouldn't say how much money the man took.

No one was hurt.

The state fire marshal's office was called in to investigate an item the man left at the scene, said Mason City Police Lt. Rich Jensen.

He would not say what the item was or if the man made any threats when he was in the bank.

A police dog sniffed around the exterior of the building. Officers also closed an approximately two-block stretch of South Monroe while experts investigated the item left behind.

Police and other non-fire investigators left the credit union while the item was examined.

The robber was last seen wearing a black ski mask and gloves in a dark, four-door vehicle with no front license plate, police say.

An "attempt to locate" message broadcast on the police scanner said the man was armed with a SKS assault rifle with a drum magazine.

Officers at the scene would not confirm if this was the type of weapon.

Investigators originally believed the robber was driving a late-model black Dodge Charger. They later determined that information to be incorrect and changed the vehicle description to a more generic dark, four-door vehicle with no front license plate.

The suspect should be considered armed and should not be approached, but the community does not need to be afraid, police said.

The last bank robbery in Mason City was at First Citizens National Bank in 2012.

"I think it’s a localized incident," Jensen, the police lieutenant, said of Tuesday's event. "Obviously, bank robberies in our area don’t happen very often, so I wouldn’t worry about visiting your local credit union or bank."

The community is asked to contact law enforcement with any information regarding the incident.

— Reporters Ashley Miller and Arian Schuessler contributed to this report.

LINCOLN, Neb. (AP) — Robbery charges have been filed in Nebraska against a man suspected of being the "AK-47 bandit," who investigators believ…

A police car parked in front of Iowa Heartland Credit Union on Tuesday. Officials were still searching on Wednesday for a man who robbed the business at gunpoint.

Police respond to a report of a robbery Tuesday at Iowa Heartland Community Credit Union.