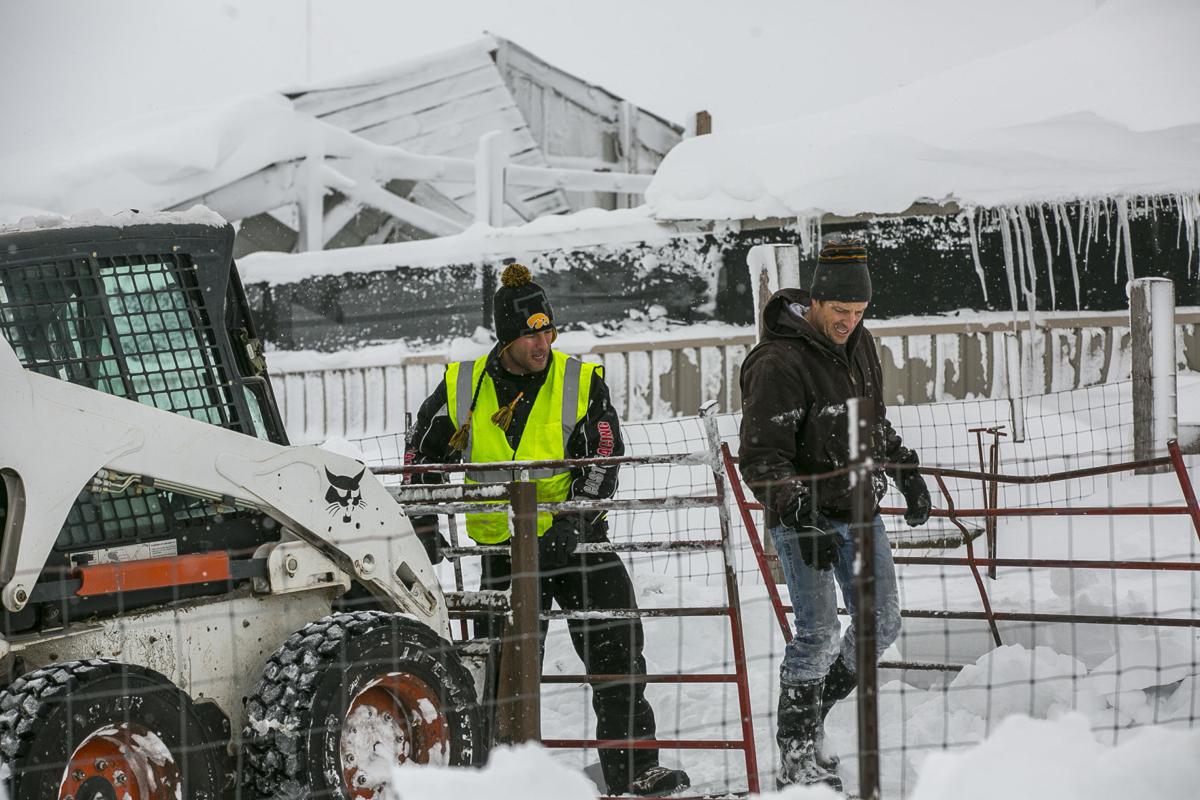 Tim Callahan, right, and Cody Wyborny work to clear snow from around fencing near the sheep barn at Carl Ginapp's that collapsed due to a high volume of snow that fell during last weekend's blizzard in Mason City. 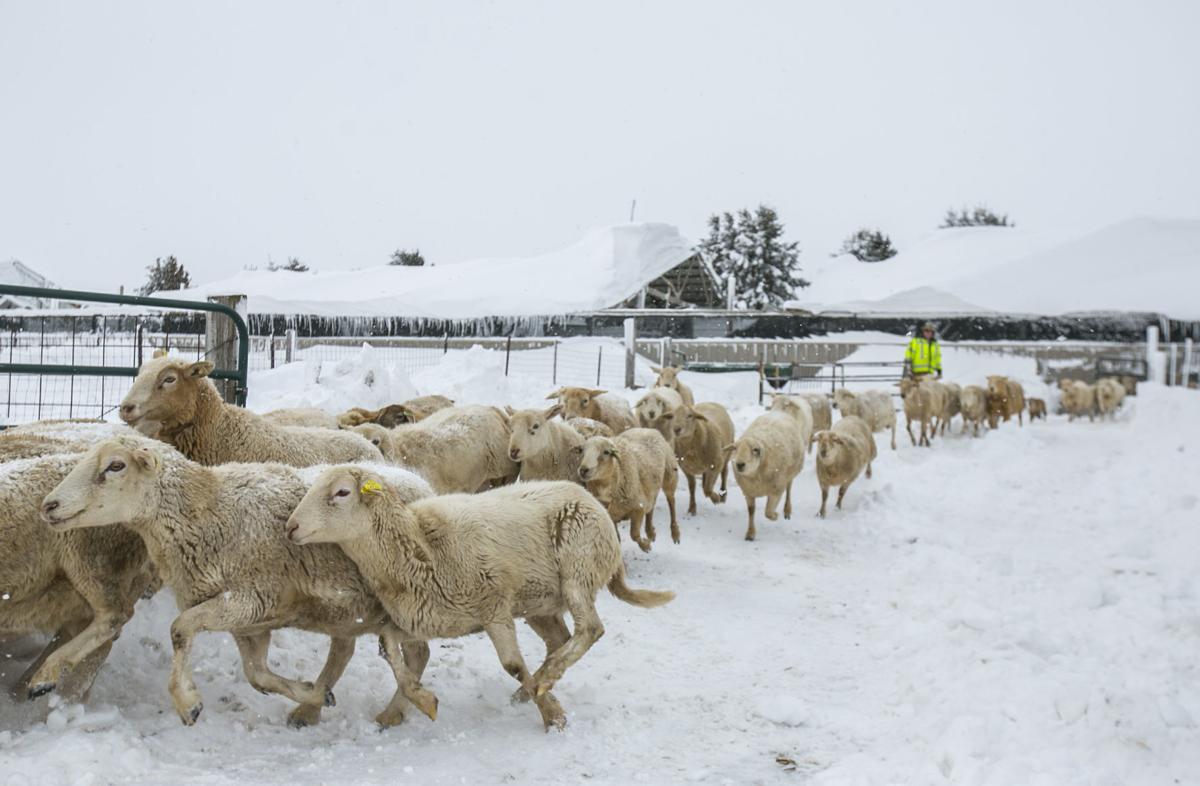 The surviving sheep from Carl Ginapp's farm are released from the barn that partially collapsed due to a high volume of snow that fell during last weekend's blizzard in Mason City. 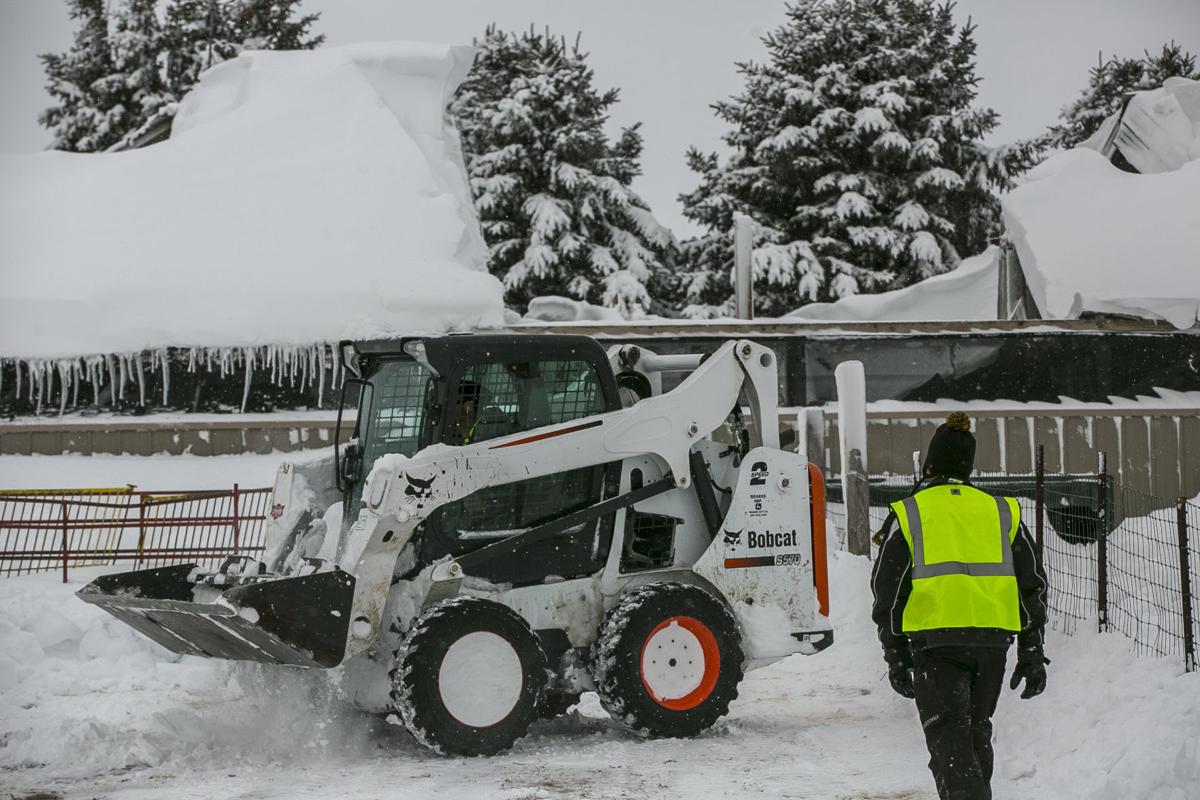 High drifting snow from last weekend's blizzard caused a sheep barn on Carl Ginapp's farm in Mason City to collapse, killing about 75 percent of his flock. 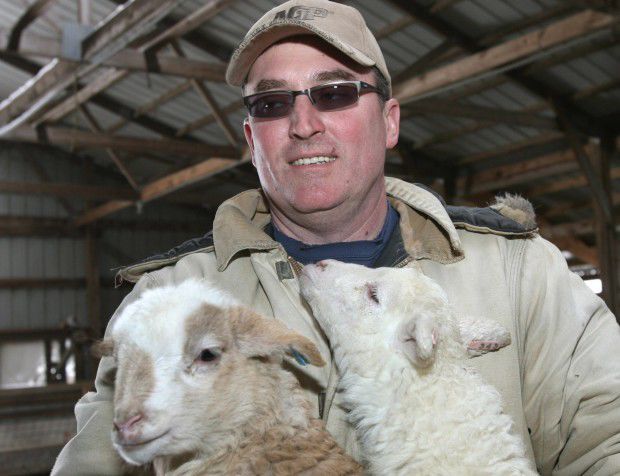 MASON CITY | Mason City Firefighter and long- time sheep farmer Carl Ginapp and his family suffered the devastating loss of his flock due to a barn collapse overnight Saturday into Sunday.

“I’m at a loss,” Ginapp told the Globe Gazette. “Farmers really care about their animals.”

His barn is located near NIACC just outside of Mason City.

It wasn’t the volume of snow but the high drifts and winds that caused the collapse, according to Ginapp.

“About one-quarter of the flock survived,” he said. But that could still change as some animals are injured. He is working with his veterinarian.

It started with terrible winds and snow overnight Saturday. No one heard the collapse of the first half of the barn.

“The wind was howling all night,” Ginapp said.

I-35 reopens, but some schools will close Tuesday (with live road conditions, photos)

Ginapp went out to assess the damage and realized he lost half of his flock. He took video of the damage.

“I got on my loader to clear some (snow), but the wind was filling it in faster that I could move it,” Ginapp said.

He went inside of his house to warm up and the rest of the barn collapsed.

“I have worked hard for over 20 years to establish my flock,” Ginapp said. “I put in the time and labor, and in one devastating storm, its gone.”

Ginapp told stories about feeding his flock when it was 30 below zero outside.

“You dedicate everything to them,” he said.

Ginapp’s family has posted about the loss on Facebook. He referred to the collapse as the worst day of his life as a shepherd.

“I have had good times and bad but I won’t be able to recover from this devastating day,” he said on Facebook. “My entire adult life has been spent building this for my retirement and now it’s all gone.”

Local farmers have banded together to help Ginapp clear snow and reach his barn as his tractor was crushed in the barn collapse.

Ginapp was overwhelmed by the messages and people who wanted to help. Cody, Rick and Jeremy Wyborny came up from Cedar Rapids to help dig out the barn and rescue the remaining sheep, Ginapp said.

The Wybornys and others were hauling load after load of snow, trying to get into the barn and let the surviving sheep out.

Other firefighters came out to help as well.

“This is what a community can do,” he said. “This is how rural America comes together.”

Beanzy’s, a coffee shop in Mason City, contacted Ginapp and said they would bring hot chili up to the volunteers.

The drifts in the tree line on the side of the barn reached 15 to 20 feet and several feet of snow was still piled on top of the portions of the roof still standing.

“We have to be careful because it’s not structurally sound.

In the past few days, Ginapp has lost his tractor and feed wagon in the barn collapse as well as a line break on his skid loader, leaving him unable to dig out without help.

“I’ve been a Mason City Fireman for 22 years and my job is to help people, our job is to go out and help people in this stuff,” Ginapp said. “It’s incredible that now I need help and all these people want to.”

The sheep were moved and fed. There are several 2-3 week old lambs. There are still some sheep trapped in the barn. The snow drifts made accessing the barn almost impossible. #iowa #iawx pic.twitter.com/DICjjbsy55

He called the farming community and the Mason City Fire Department a family that has his back when he needs it.

“Some of them are people I don’t know,” he said.

Volunteers and local farmers have lended him equipment and are offering to house the sheep in their barns.

On Saturday night, Ginapp said his daughter told him a friend was stuck in the snow.

“We went out there and got ‘em,” Ginapp said.

Then his truck became stuck in the snow. They had to walk back one mile to the house in the middle of the blizzard.

“These sheep are tough,” he said, becoming emotional. “You just get so attached to them.”

A Mason City firefighter & sheep breeder lost about 3/4 of his flock when his barn collapsed during the storm Saturday night into Sunday morning. It took several hours and many vehicles to dig out the barn to get to the animals. Here’s video of the remaining sheep being released. pic.twitter.com/Ddpdo8yW0B

At about noon, Ginapp was finally able to open the gate and let the sheep out into a cleared space with hay to eat.

“Here’s the running of the lambs,” he said. Some of the lambs were only 2 to 3-weeks-old.

While looking at the sheep in the open, he noted that there were more sheep alive than he initially thought. Still, it is a huge loss.

Ginapp is a member of Katahdin Hair Sheep International. Though that organization he has received supportive messages from all over the world.

Puerto Rico, Russia and other shepherds across the country have messaged him.

A Go Fund Me page was started by Robert Walker, a fellow shepherd from Tennessee and member of Katahdin Hair Sheep International, to help raise $20,000 to rebuild his flock.

“The insurance will cover the barn, but no money can replace 20 yrs (sic) of genetic gain,” Walker posted on the Go Fund Me. “You will not meet a more humble and appreciative guy.”

One of the most common sights in Mason City on Sunday was frustrated people digging in vain to try to free their trapped vehicles. The snow, p…

MASON CITY | The roof at the Plaza West Shopping Center, between Cost Cutters and CosmoProf, shifted down some 8 inches and ceiling tiles coll…

Globe Gazette editorial: After the Blizzard of 2019, thank you

The Blizzard of February 2019 won't be soon forgotten and will be talked about for decades to come. It wasn't fun. It wasn't easy. And my oh m…

TITONKA | A Titonka family raises a rare breed of sheep for their wool, which is prized by fiber artists for its softness.

We asked readers to submit their photos of North Iowa in the aftermath of this weekend's storm. They're big.

Tim Callahan, right, and Cody Wyborny work to clear snow from around fencing near the sheep barn at Carl Ginapp's that collapsed due to a high volume of snow that fell during last weekend's blizzard in Mason City.

The surviving sheep from Carl Ginapp's farm are released from the barn that partially collapsed due to a high volume of snow that fell during last weekend's blizzard in Mason City.

High drifting snow from last weekend's blizzard caused a sheep barn on Carl Ginapp's farm in Mason City to collapse, killing about 75 percent of his flock.