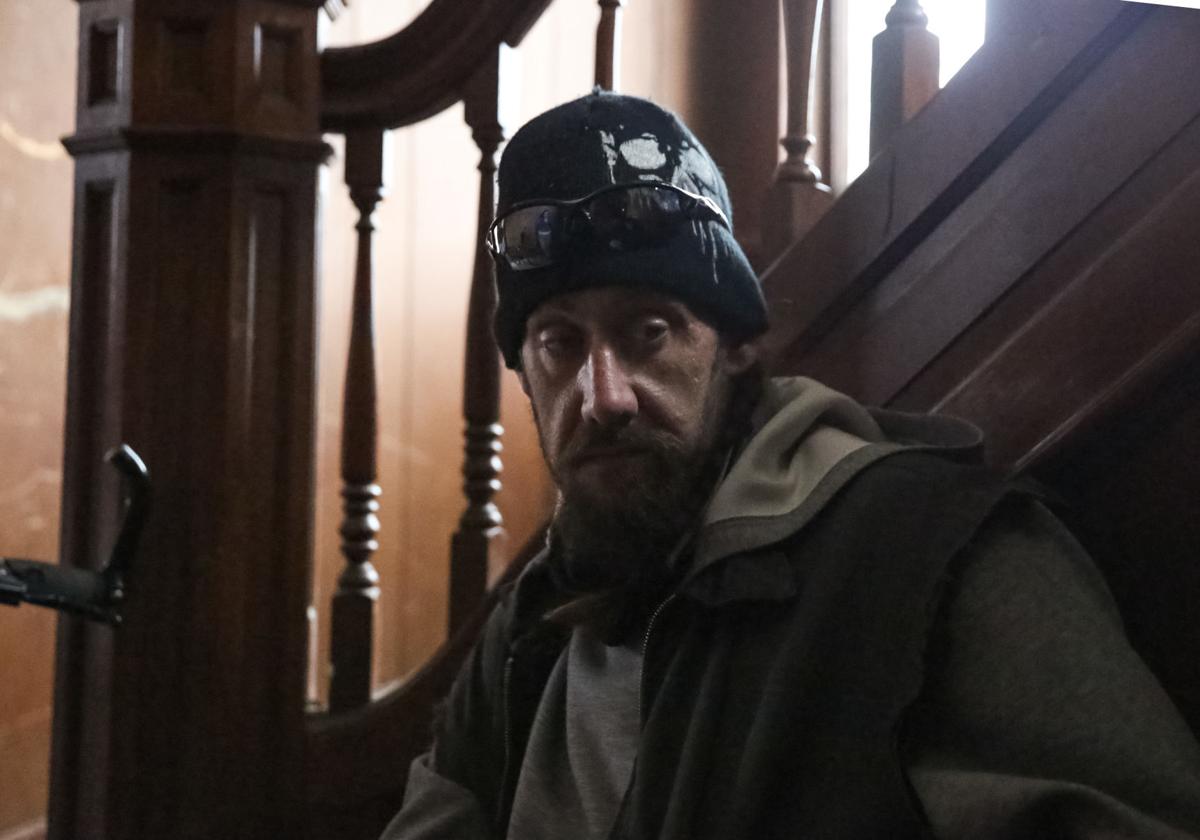 Brad, who's been squatting in the common areas of a Mason City apartment building with his girlfriend, Megan, talks to a housing specialist from Friends of the Family. 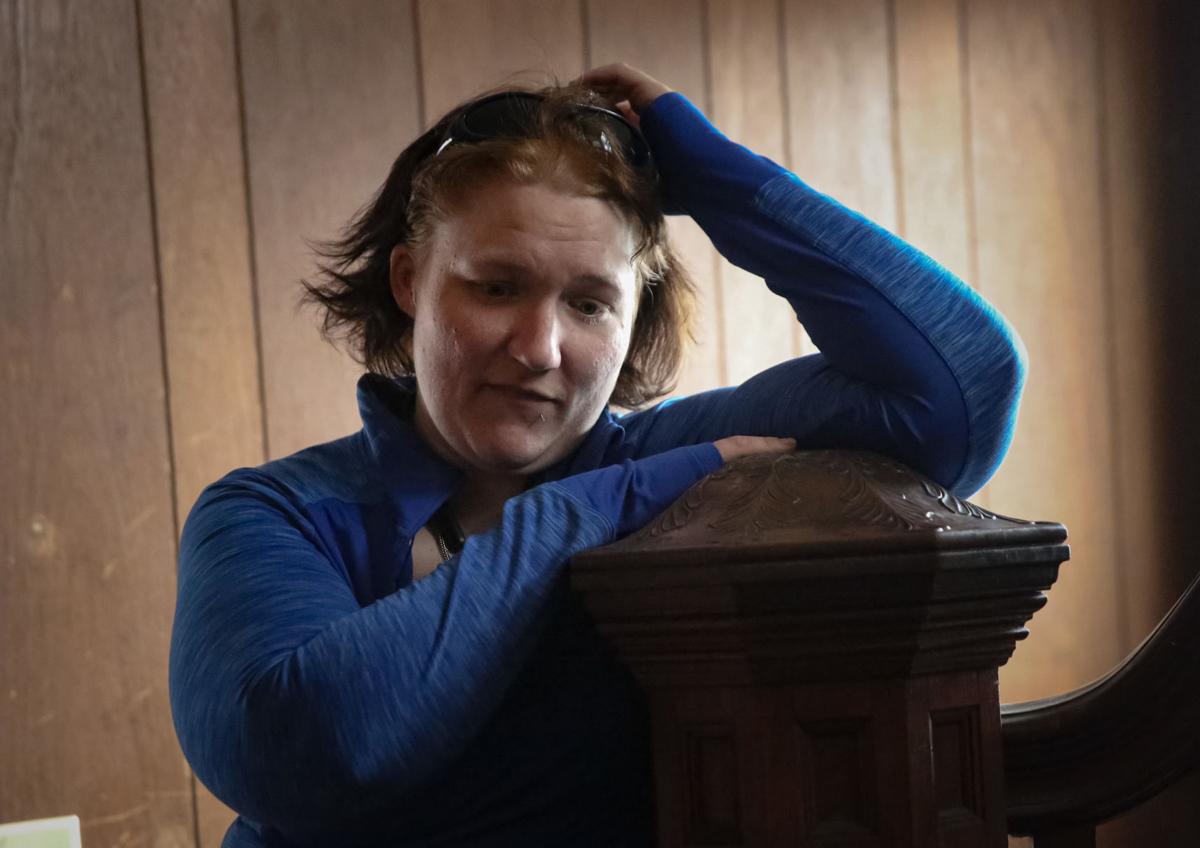 Megan, who's been squatting in the common areas of a Mason City apartment building with her boyfriend, Brad, talks to a housing specialist from Friends of the Family. 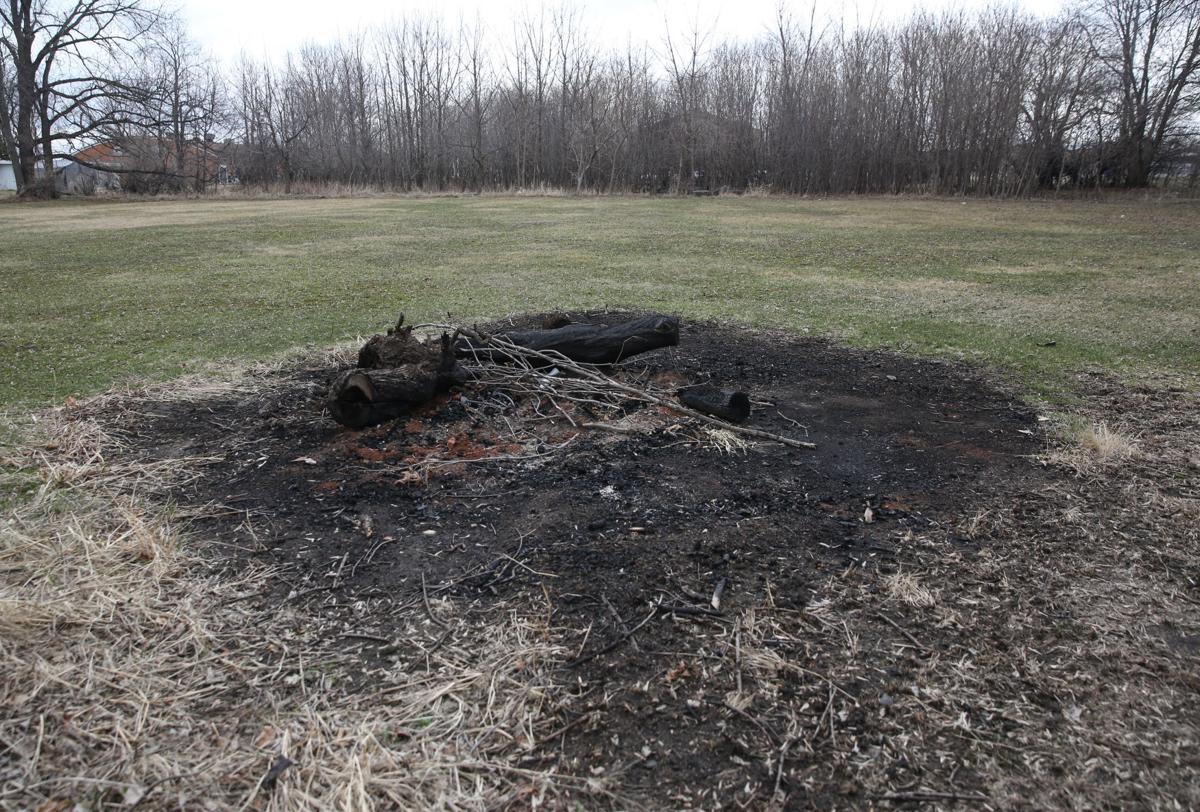 Remnants of an apparent homeless camp can be seen on Mason City's west side.

An advocate for the homeless stands in a common area of a north side apartment building where the smell of urine and hopelessness is overwhelming and goes through a questionnaire with Brad and Megan Fielding.

Question: In the last three years how many times have you been homeless?

Question: Have you called any agencies?

All of them, Megan replies. We've called so many since this happened.

The Fieldings are sheltering in the apartment building after having hopped from friends' couches to a place on the southeast side where they were about to begin paying rent before it burned down and left them with a few days' vouchers at a local hotel and nothing beyond.

In mid-March, the U.S. Department of Housing and Urban Development issued its 2020 Annual Homeless Assessment report, otherwise known as its "Point in Time Count." It's called that because it is conducted nationwide over a single night to capture not only the number of homeless but also their demographics.

The report's findings lag a year behind but include a number of key findings for Iowa:

Locally, data on the homeless is difficult to come by as it is not tracked by local government, any person or organization, said Cerro Gordo County Auditor Adam Wedmore. As part of the 2020 Census, Wedmore had to supply data about locations where certain services are provided in the county. One of them is the Northern Lights Alliance for the Homeless.

The questions Brad and Megan answered are part of what's called the coordinated entry program. Each person who seeks help for homelessness must answer the questions, which then assigns them a number. The higher the number, the more dire the person's situation.

Jeannie Churchill is the director of Northern Lights. She said she's disturbed but not surprised by HUD's numbers, and even thinks they're likely low. Her shelters for men and women are full.

There are probably between 46-56 homeless people in North Iowa right now, Churchill said. That includes 10 listed on the coordinated entry program report. But the problem with it is that someone cannot go on the list for aid until they've been in the homeless program for at least seven days.

"We have people who self-resolve within that time and people who we are able to help within that time so not all go onto this list," Churchill said, "which in my opinion, shouldn't be the case. Every homeless person needs to be counted whether they are homeless for one day or 100."

A further example lies in HUD's point in time report versus the coordinated entry report for the same time period. HUD says the total number of people experiencing homelessness in Iowa is 2,647. The coordinated entry program report has 1,224 on its list, Churchill said.

The why is elusive

No one who works with the homeless can entirely pin down the reason for the increase (remember, this report pre-dates the COVID-19 pandemic), but they do have theories.

"This has been going on for a long time," said Amanda Ragan, the Iowa state senator representing the Mason City area who is also the director of the Community Kitchen, which serves free meals to those in need.

The Kitchen had a banner year in 2020, serving 54,864 meals to hungry North Iowans, nearly 10,000 more meals than in 2019. The Kitchen does its own point in time type of survey. Every time someone comes in for a meal, they must sign in and answer five questions, Ragan said.

"That's not enough to have a place to live," she said.

Ragan agreed with Churchill that HUD's numbers likely were low, because HUD's definition of homeless does not account for people like Brad and Megan, who were couch hopping. Counting people like that, Ragan believes the number of homeless in North Iowa is at least 15%-20% greater.

In addition to beds, there's just not enough services either to help the people with the underlying issues that likely rendered them homeless in the first place, Ragan said. Veterans make up 11% of the Kitchen's diners and many others have mental health and substance abuse issues.

Part of the problem with grant money available for organizations that serve the homeless is that use of it is so strictly regulated that it can't be used to help many with underlying issues like drug or alcohol abuse, or who may have been in jail in the past, according to Northern Lights' Churchill.

Nicole Jacobs is a housing support specialist with Friends of the Family, an organization that seeks to fill that gap. FoF has also seen a marked increase in people needing help and has a rapid housing program with 10-11 slots in North Iowa that has no prerequisites other than being homeless.

"The mental health piece is big in North Iowa, as is domestic abuse," Jacobs said. She estimated about 50% of the people she's worked with since starting with the organization last September were "unsheltered," meaning they were sleeping in the streets or in unoccupied buildings.

Friends of the Family recently received a more than $600,000 grant that will allow them to put two full-time caseworkers in North Iowa for the rest of this year to expand its rapid housing program, said FoF Executive Director Ben Brustkern.

Housing, not shelter is the focus. So is helping anyone, regardless of the circumstances that rendered them homeless.

"A shelter is a process. Housing is a solution," Brustkern said. To that end FoF worked with 20 households made up of 21 adults and 20 children in its rapid housing program in 20. It's currently working with another 24 households, while another 40 sit on a prioritization list.

And on March 26 another household was added in Brad and Megan. Jacobs was the advocate who administered the questionnaire to the two. She was able to secure them hotel vouchers from the Red Cross that will keep a roof over their heads until April 8.

They're on the prioritization list, but whether or not they will get help before time runs out on their hotel vouchers is what keeps them up at night.

The Living Free program is having its five year anniversary celebration at the North Iowa Fairgrounds on Friday evening.

The Council also approved plans for the Charles City Farmers Market to begin on May 1.

More than a year after the pandemic hit, some light is being let in.

"We would really like to fill up those slots," CG Public Health Director Brian Hanft to Mayor Bill Schickel on Wednesday afternoon.

"We still need to be safe in what we do out on the road whether our permit numbers decrease or remain the same."

Brad, who's been squatting in the common areas of a Mason City apartment building with his girlfriend, Megan, talks to a housing specialist from Friends of the Family.

Megan, who's been squatting in the common areas of a Mason City apartment building with her boyfriend, Brad, talks to a housing specialist from Friends of the Family.

Remnants of an apparent homeless camp can be seen on Mason City's west side.