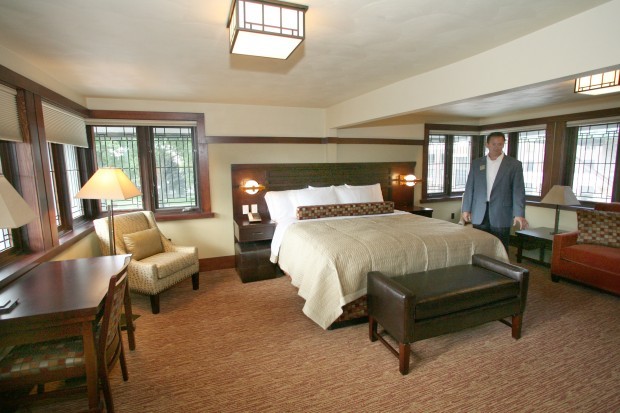 Hotelier Steve Noto shows one of the rooms in the Historic Park Inn shortly after it opened. 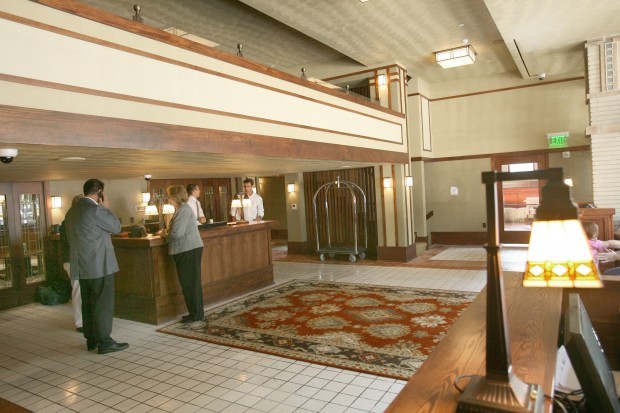 The lobby of the Historic Park Inn which opened Monday. 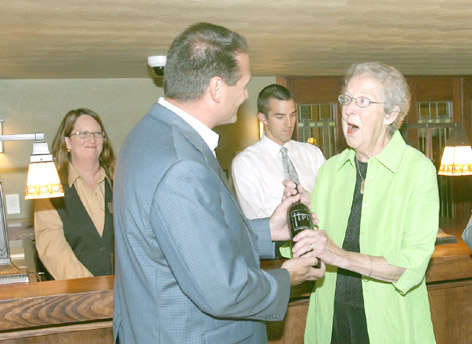 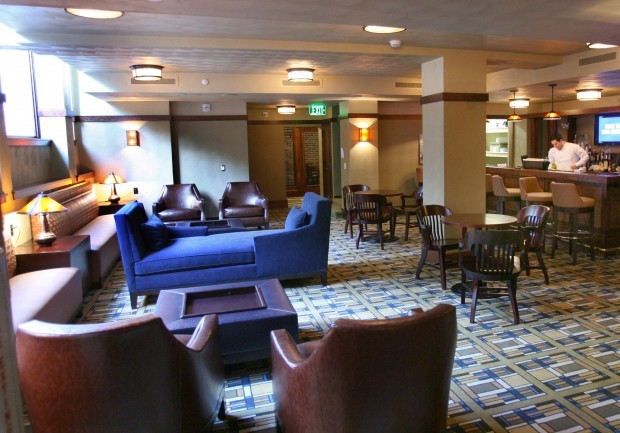 Zach Avila, Rudd, gets the bar ready at the Historic Park Inn on Monday.

MASON CITY — The renovated Historic Park Inn opened on Monday, a testament to a vision for a building thought lost — and immeasurable hard work.

The opening just happened to fall on the birthday of executive director of Wright on the Park  Inc., Ann MacGregor.

“What a present,” MacGregor said.

MacGregor was treated to a limousine ride — along with Wright on the Park President Jean Marinos and her husband, Jim — by hotelier Steve Noto. It was the first official ride in the Historic Park Inn limousine.

“Holy cannoli,” exclaimed MacGregor upon alighting from the limo. “This day has been over the top. On my birthday! Oh my gosh.”

“And our ‘days’ are just starting,” referring to the new era for the historic hotel, the only existing Frank Lloyd Wright-designed hotel.

It was a “soft” opening. A grand opening of the hotel, which has undergone a $20 million renovation, is planned for September.

It was a day of firsts.

The entire Wright on the Park Board of Directors planned to spend the night at the Inn.

Members streamed into the hotel during the late afternoon. Noto offered a few celebratory words to the group and presented the very first bottle of “HPI” wine — a private label for the “Historic Park Inn” — to MacGregor.

Surprised and delighted, she quipped, “This is one bottle that will never be opened.”

The presentation brought to a close a day full of “1,001 last minute details,” said Noto.

“Keeping everyone going the same direction has been the biggest challenge.”

Still, he said, “It’s been fun to see all the details come together.”

Eighteen staff members spent a week in training before the doors opened.

The staff was equally excited.

“When I saw they were hiring, I knew I wanted to be a part,” said Shelley Koren, who works as a front desk attendant “and Historic Park Inn ambassador,” she added proudly.

“There were just too many things running through my head,” she said. “But today there is relief — and excitement.”

Others coming to the hotel for the first time were impressed.

“We wanted to be the first” to stay in such a historic hotel,” confided Jennifer Clark of St. Joseph, Mo., who was visiting with her husband, Alan. “It is beautiful, stately.”

Peggy Bang, the first president of hotel owner Wright on the Park, smiled broadly as she gazed around the main lobby.

“This project would never have been accomplished without people without a lot of heart,” she said. “I am absolutely thrilled.”

Despite the federal vaccine mandate not being enforced in Iowa, the Clear Lake School District approved a second reading of their Occupational…

If you've driven on 12th Street Northeast in Mason City in the past few days, you've likely noticed the construction work taking place in the …

Haas Chiropractic clinic in Mason City recently donated $12,000 to the Humane Society of North Iowa as part of the clinic's "Give Back Movement."

"We have seen a tremendously positive impact on the residents as a result."

Winter storm to slam all of Iowa through Friday night

A significant winter storm will be impacting all of Iowa Friday and Friday night. Winter storm warnings and winter weather advisories are up f…

There are some major plans on the horizon for the Mason City Council, and those plans began to take shape this week.

Hotelier Steve Noto shows one of the rooms in the Historic Park Inn shortly after it opened.

The lobby of the Historic Park Inn which opened Monday.

Zach Avila, Rudd, gets the bar ready at the Historic Park Inn on Monday.