Looking for omicron: How long until variant is found in U.S.?

About four years before the town of Nora Springs was incorporated (in 1875), Samuel Spotts and his wife, Margaret, bought land along what is now Warbler Avenue for $30 an acre. This past month, Marcus Spotts and his wife, Cathy, paid $15 a piece for commemorative t-shirts to mark 150 years and five generations of farming that very same land.

During the Iowa State Fair this year, the Spotts family was honored by the Iowa Department of Agriculture and Land Stewardship for having a Heritage Farm which is farmland of at least 40 acres that's been owned and operated by the same family for 150 years or more.

When asked about the recognition, which includes a plaque and an honorary stump, Marcus said that what he's proudest of is how the award speaks to the character of those before him.

"(It's the) perseverance that everyone had, even through the tough times. They just keep going, like a bad habit," he said.

With the Spotts family, the land went from Samuel and Margaret to Abraham and Emma Spotts in 1895. Then it was passed to Paul and Alma Spotts in 1944. Lester and Lorraine Spotts assumed control in 1973, before Marcus and Cathy took charge in 2016. Marcus kind of always knew he'd farm the land, Cathy wasn't as certain though there were some signs.

"No, I didn’t think I would but my grandma farmed and my mom was his (Marcus') second grade teacher here in Nora Springs," she said.

Through 2021, there are 1,566 Heritage Farms in the state of Iowa (according to the Iowa Department of Agriculture and Land Stewardship). Dubuque County has the most Heritage Farms, at 57, while four counties (Adams, Cherokee, O'Brien and Osceola) don't have any.

There are a total of two heritage farms in Cerro Gordo County, the one owned by the Spotts family and one owned by Randall T. Law. In Floyd County, there are 10 such farms.

The program itself began in 1976 with awards for Heritage Farms as well as Century Farms which have made it at least 100 years within the same family. In Iowa, through 2021, there are 20,537 Century Farms including 122 in Cerro Gordo and 178 in Floyd.

Along with consistent ownership of the 160-plus acres in Nora Springs, Marcus said that what's been grown on his family's land hasn't changed a whole lot since Samuel started.

"Corn and soybeans," he said. Per Marcus, the family works about 110 acres of corn and 52 acres of beans.

What's also kept up over time is the way the family has reckoned with hardships such as inheritance tax matters in the 1970s or price problems in the 1980s.

"Part of the reason we’re this far is that we have a short memory," Marcus said. "We always prepare for the worst and hope for the best."

For decades now, part of that preparation has involved working with agronomists, salesmen and even fellow neighbors Bruce, Sandy and Jordan Davison who Marcus is quick to thank.

DES MOINES — Federal agriculture Secretary Tom Vilsack on Thursday responded to concerns expressed by some in the renewable fuels and biofuels industry who believe President Joe Biden’s administration is placing more of an emphasis on electric vehicles and less on renewable fuels like ethanol and biodiesel.

A somewhat more recent trend in the Spotts clan has been a fondness for aviation.

In 1946, Paul Spotts, Marcus' grandpa, built a hangar out near several fields of crops. To accompany the hangar, there's a runaway that stretches about three acres through the property. Marcus said that Paul had at least one plane out at the hangar but there would be events for the "Flying Farmers" where folks would park their planes in the area around the runway.

Paul passed that love of flight down to his son, Lester, who then passed it down to Marcus who got his license in 1983. Marcus' son, who goes by Blake, has his license as well. Of all the places on the Spotts farmland, Marcus said that the hangar and runway area is his absolute favorite.

"It'll take you anywhere you want to go," he said. For him and Cathy, that's meant taking vacations in Florida, going to a wedding in Atlanta and even flying over the "Field of Dreams" movie site in Dyersville during the MLB event earlier this summer.

"The key is not having to go to the airport," Cathy joked.

There have been more utilitarian functions too. Cathy said that the family's previously used its Cirrus SR22 to hunt down people's cattle that got out and Marcus shared that having a plane is helpful to check out the fields. He then added that his grandpa and dad would actually hunt fox out of the plane.

The Spotts don't have any plans to turn over those wings anytime soon and they certainly don't have any intent to stop farming their land either. The way Marcus sees it, it's more of a motivator to work in a place that's been a part of a family for so long.

"You’re going to work a little bit harder to keep it going," he said.

Cathy sees it as a way of belonging and a way of tapping back into the present but also looking toward the future.

"Everybody wants to be a part of something and I think it’s quite a legacy for our kids to see that and to see that you’re working together even when you might not always get along."

DES MOINES — Sometime next year, Iowans will have the option of keeping their state-issued driver’s license on their smartphones and not just … 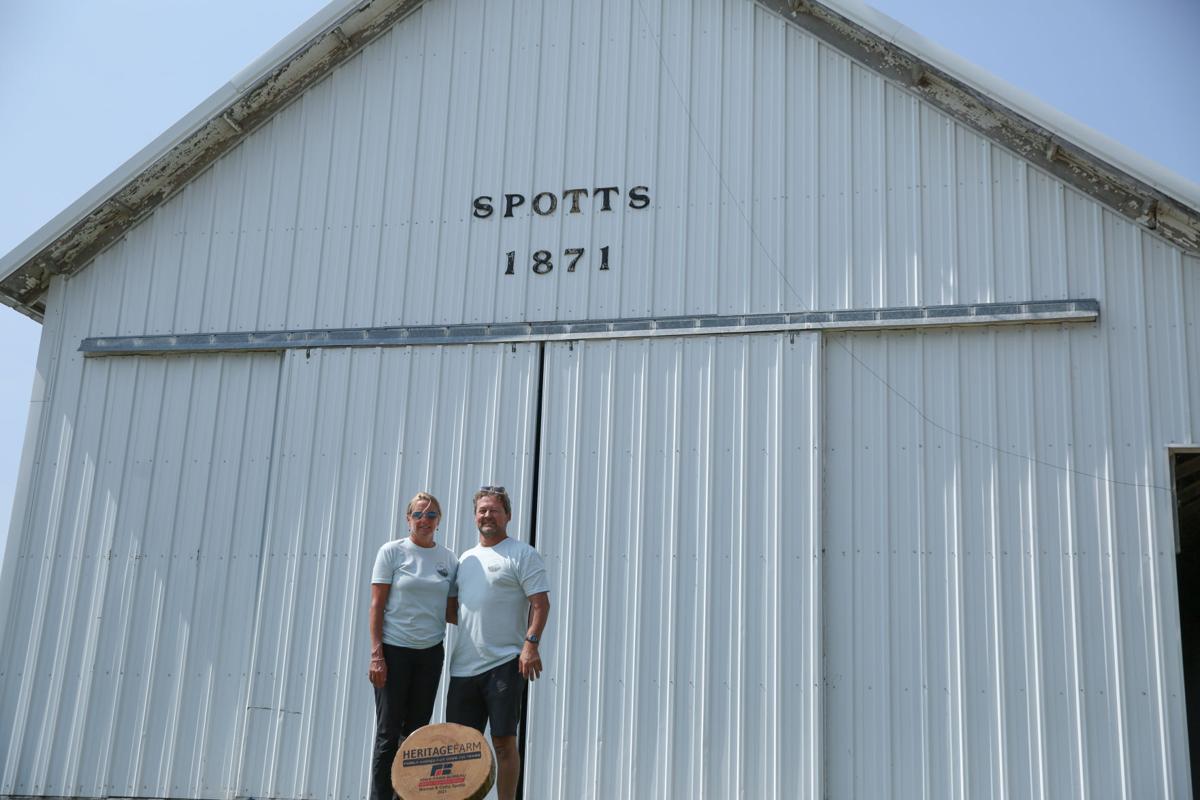 Marcus and Cathy Spotts stand in front of a shed on their property in rural Nora Springs on Thursday. 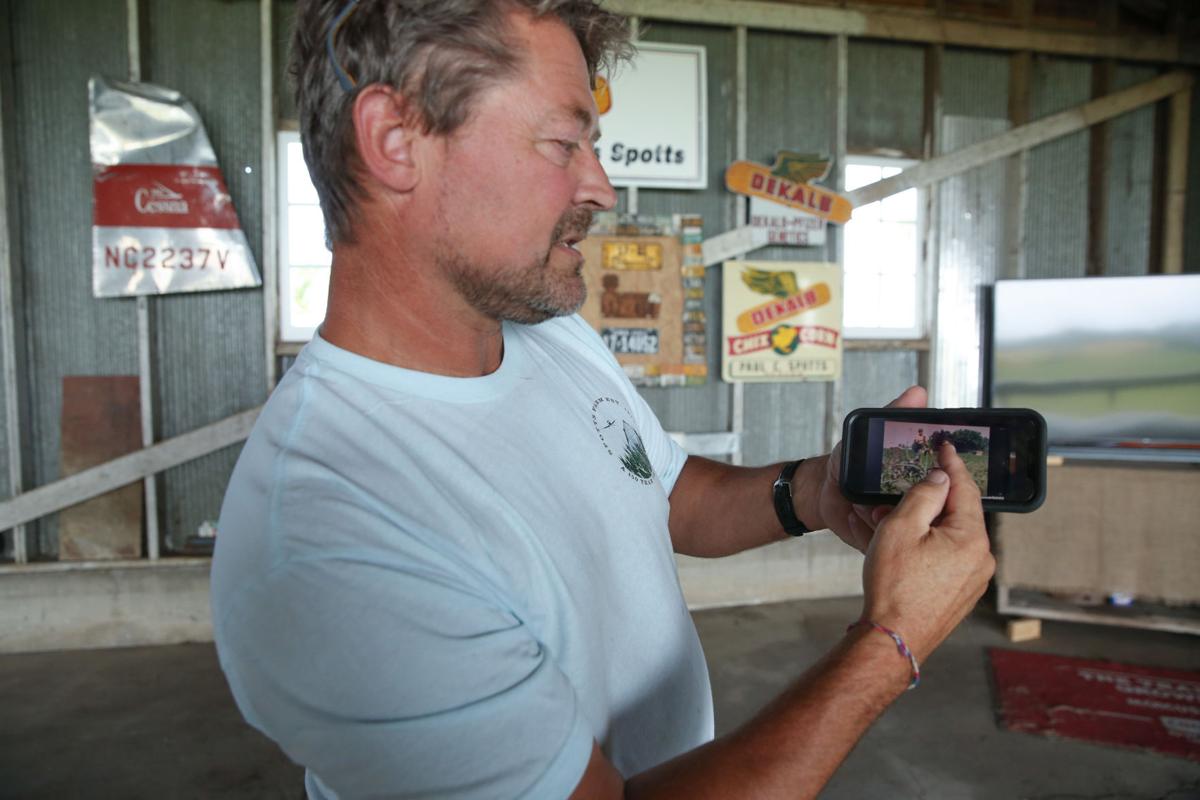 Marcus Spotts displays restored family movies from the early 1900s on his cell phone at his farm in rural Nora Springs on Thursday. 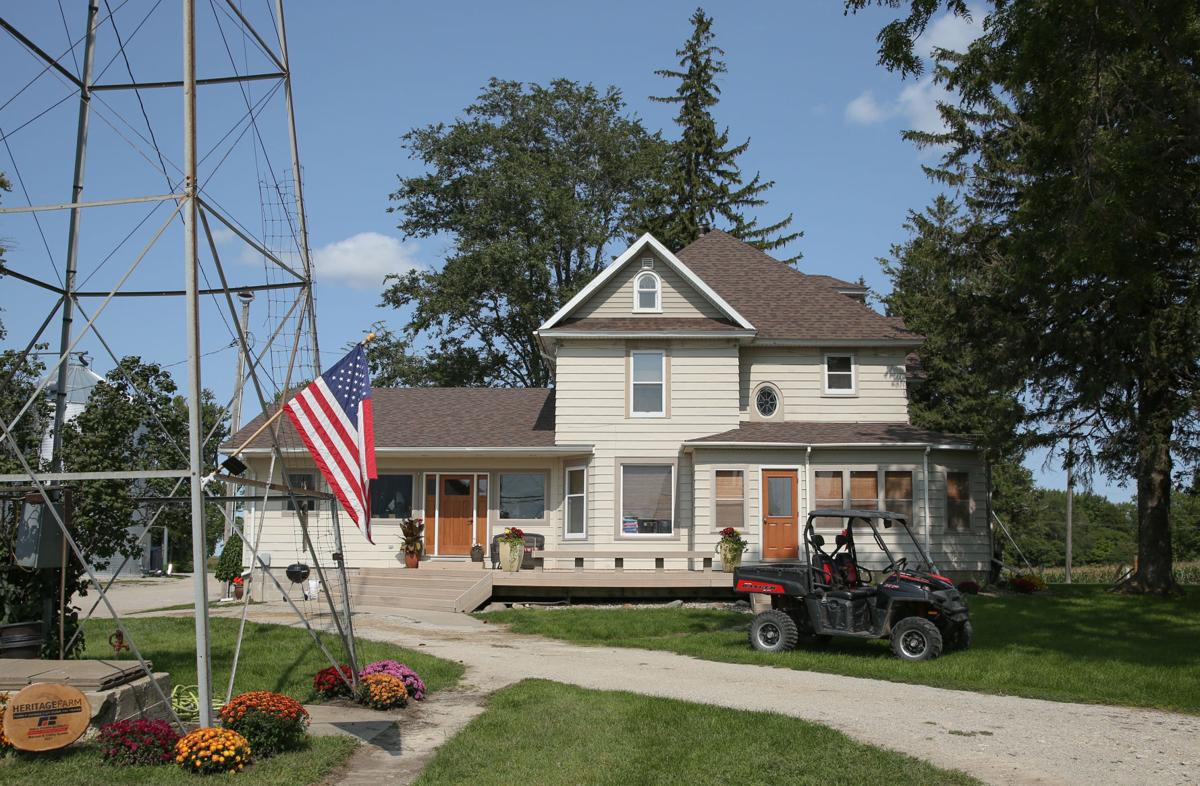 Property records indicate the home on the Spotts' farm in rural Nora Springs was built 115 years ago. 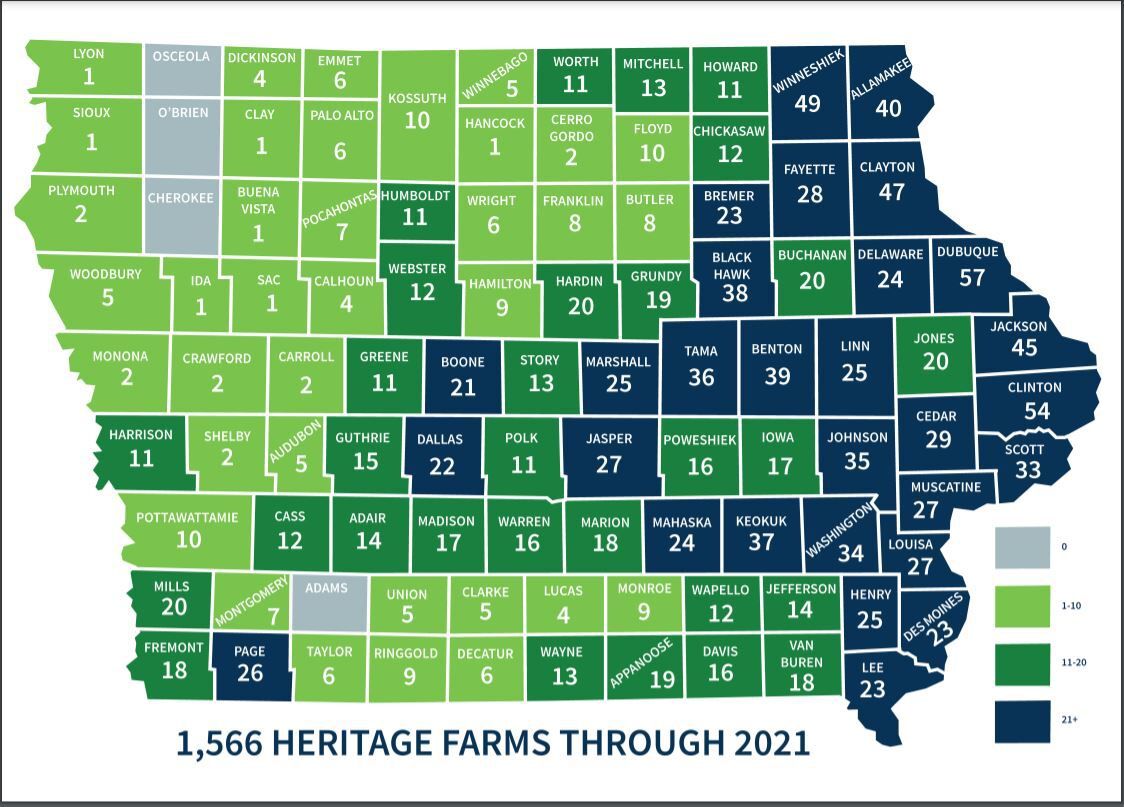 Heritage Farm awards in Iowa go to any family that has owned and operated at least 40 acres of land for 150 years or more. The state also has Century Farm awards that the Iowa Department of Agriculture and Land Stewardship gives out. 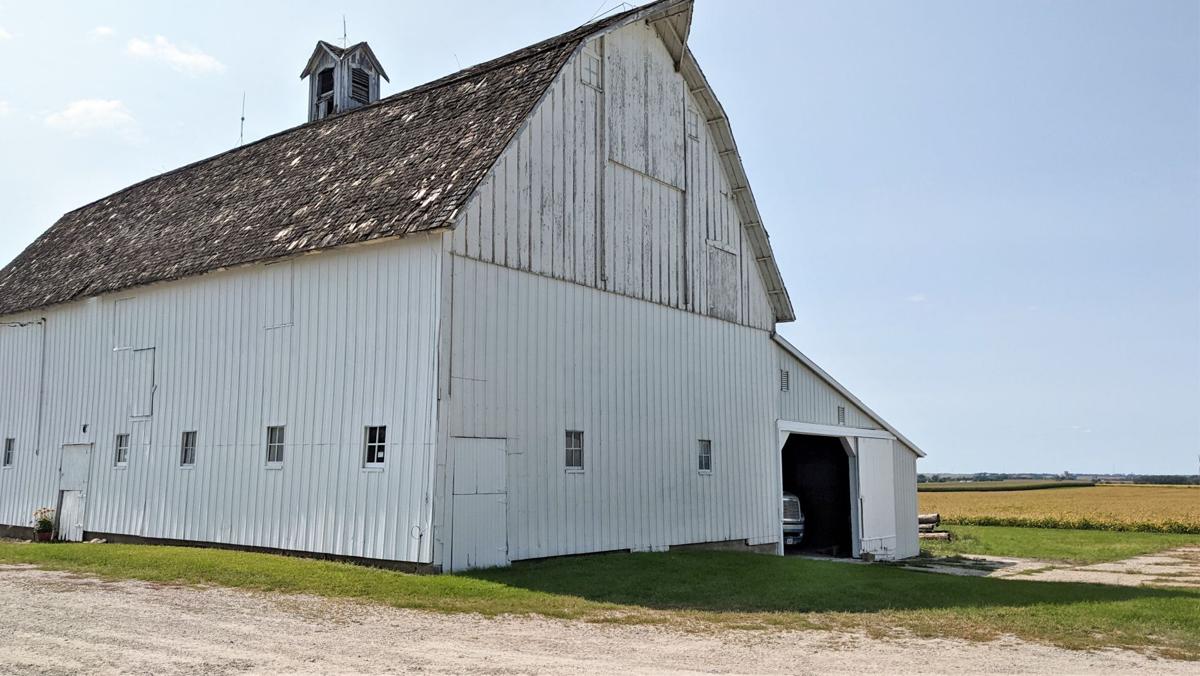 The barn on the Spotts' property in rural Nora Springs, along with most of the structures there, dates back over 100 years. 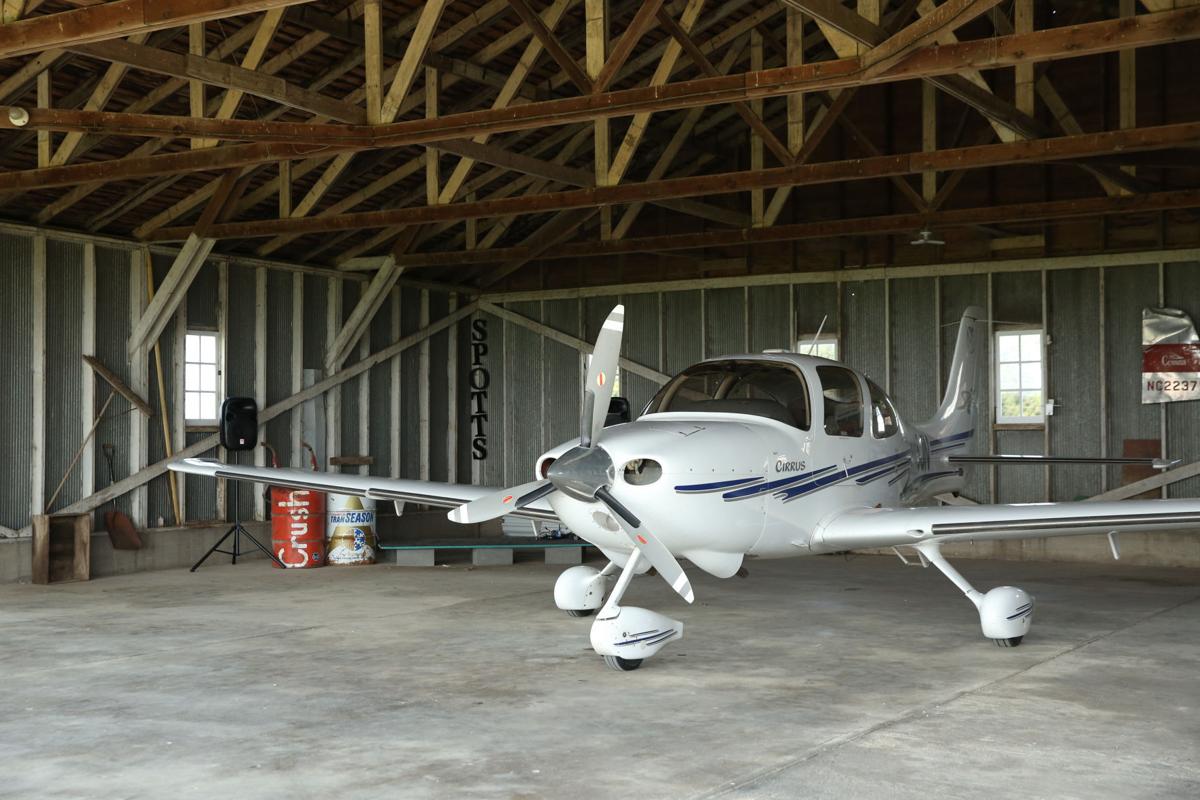 Small planes have always been a part of the Stotts family. 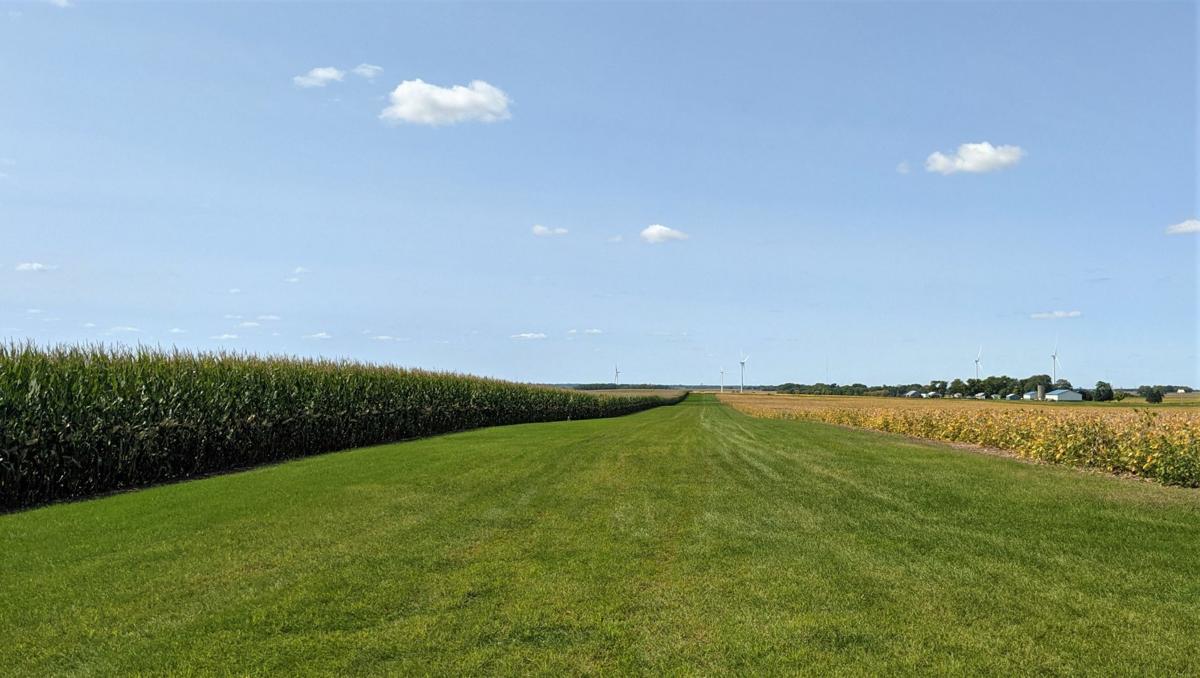 The Spotts have a half-mile runway situated between a bean and corn field on thier property in rural Nora Springs, specifically for their small passenger plane.