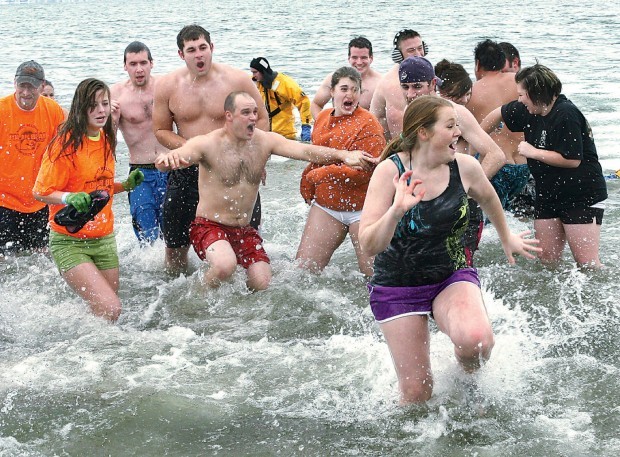 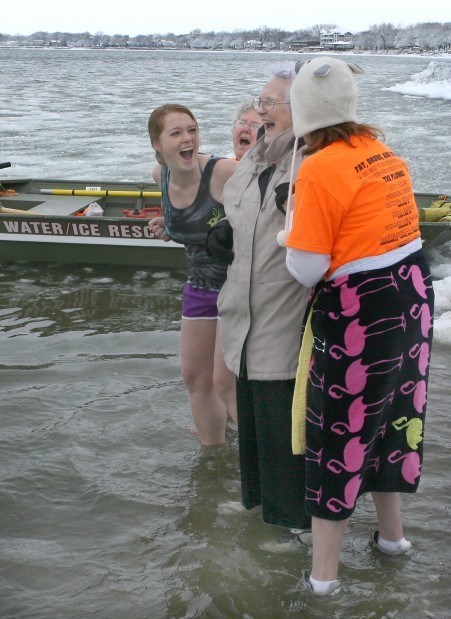 92-year-old Rosie Jacobsen (second from the right) of Nora Springs, is guided into the water with help from her great-granddaughter, Tiffany Dow(left) of Mason City; Tiffany's mom, Jody Dow (right) of Rockford; and Jody's mom, Jolene Jacobsen of Nora Springs, who is Rosie's daughter-in-law. That's four generations of women from one family taking the Polar Bear Dip Sunday at Clear Lake..

CLEAR LAKE — Rosie Jacobsen, 92, of Nora Springs, waded into the freezing waters of Clear Lake during the annual Polar Bear dip on Sunday.

“That was such a great day for me,” Rosie said.

She waded in until the water was somewhere between her ankles and her knees.

She got a high-five from one of the firefighters who are always in the water for the Polar Bear dip as a safety precaution.

Another man in the water taking the Polar Bear dip shook her hand.

“People were all so wonderful to me,” she said. “I really enjoyed it.”

She said she didn’t even find the water to be that cold. She prayed that God would keep her warm.

Rosie was one of 510 people participating in this year’s Polar Bear dip. She and her relatives were part of the Mike’s Welding/Sidewinder Lounge team.

The event raised $21,000, which will go toward Make-A-Wish and Toys for Tots.

“Just think of all the children it helps,” Rosie said.

She agreed to participate in the Polar Bear dip because of her great-grandson, Lukas Jacobsen, 6, who was born with a heart condition and received a wooden swing set through Make-A-Wish.

Rosie was all bundled up for her trip into the lake  but others chose to wear bathing suits.

Some wore costumes, such as grass skirts. One woman carried an inflatable palm tree into the water.

A hot tub was set up near the lake so the shivering members of the Polar Bear Club could warm up after their dip.

Adam Sundt, a former Garner resident now living in Rochester, Minn., participated in the Polar Bear dip for a second time this year.

“I drove 120 miles to be with these crazy boys,” he said, referring to other members of the team titled The Wrecking Crew.

Unlike last year, when the lake had already frozen over and a hole had to be cut into it accommodate the members of the Polar Bear Club, there were just pieces of ice floating in the lake.

But the water was still very cold, according to Krya Newby of Mason City, a member of Mike’s Welding/Sidewinder Lounge, who was making her first Polar Bear dip.

“I thought I was going to die,” she said. “Before the hot tub, you don’t think you’re going to make it.”

A disagreement over trash has led to jail time for a 51-year-old Mason City man.

A Charles City woman is in Mayo Clinic Hospital in Rochester, Minnesota, after the car she was driving in Floyd County collided head on with a…

When a COVID-19 patient was dying in the critical care unit at MercyOne North Iowa Medical Center without family there, nurse Naomi Reiff held…

Jake Tefft: New nurse had to hit the ground running during COVID-19 pandemic

When Jake Tefft was hired for his first nursing job by MercyOne North Iowa in January 2020, he had no idea what was coming.

"Through the darkest of times, never have our core values shined brighter."

92-year-old Rosie Jacobsen (second from the right) of Nora Springs, is guided into the water with help from her great-granddaughter, Tiffany Dow(left) of Mason City; Tiffany's mom, Jody Dow (right) of Rockford; and Jody's mom, Jolene Jacobsen of Nora Springs, who is Rosie's daughter-in-law. That's four generations of women from one family taking the Polar Bear Dip Sunday at Clear Lake..