When Arthur Sabin was growing up as an orphan in Minnesota, his sanctuary was the railyard. He would take his rest in various cabooses and benevolent train crews would look after him.

Although he found solace in the railroad in those hard-scrabble days of his youth, his son, Dan, said that it took some time for him to find work on the trains. It wasn't until 1944, when he was around 30, that Arthur got going. Once he started up, Arthur didn't stop until he'd logged about three decades worth of work that would often run him from his home in Manly to either Cedar Rapids, Des Moines or Minneapolis. The Rock Island Line engineer was passionate enough about the job that his family couldn't help but follow in his footsteps.

"I rode with him many times. It was a lot of fun. He was a very serious guy but he taught me a lot. I was the youngest of six kids, five of us were boys, and we all started our careers on the railroad," Dan Sabin said.

All in the family

One brother, Duane, worked as a signal maintainer keeping electrical equipment in good shape, while another brother, Dave, served as an engineer for the Rock Island Line and the DM&E railroad, which is now a part of the Canadian Pacific. Still another brother, Mark, ended up in the rail industry after pursuing a wholly different career first.

"I wanted to be a mortician but I came back (to Manly) and thought I'd work (here) for the summer and I never left," Mark said.

For Dan, his time with the railroad started before he'd even turned 16 years old. By the time he was 18, Dan said that he was the youngest train dispatcher in the country. Eventually, after landing work with several railroads out east, Dan said that he helped launch a consulting firm in 1987. What brought him back to the area was a chance to work with what had once been part of his dad's old route.

"The Rock Island had gone bankrupt and the Iowa Northern (Railway) had formed out of the bankruptcy. So I came back and helped get the railroad organized...(then) we took over the management in February of 1994 and closed on the purchase in November 1994," Dan said. Now, Iowa Northern Railway Company includes five Sabins: Dan, Mark, Brad, Joshua and Jonah.

Jim Angel, a former Mason City resident who penned a book about the "Steam Railroads of Northern Iowa and Southern Minnesota" with his granddaughter, Ashley Mantooth, said that he laments the loss of the old Rock Island Line.

"It was a great line. It was a shame," he said. "Great engines. Their engines were much more responsive."

Though Angel didn't work on the Rock Island Line himself, he worked on the Milwaukee Road route around the Mason City area, he said that the railroad would send an engine down from Manly to switch over in Mason City. But there could be issues with the rails.

"The Rock Island never really maintained its tracks and that was 10 miles that was always kind of iffy about how things were going to run," Angel said.

Decades upon decades later, Dan said that Iowa Northern Railway, where he serves as president and where Mark works as a senior vice president, is laying all new rail on its line and some of that hits close to home.

"We’ve got about 30 miles of track to restore and the rail in those portions was there when he was running steam locomotives," Dan said.

More than just a railway

Unlike the Rock Island Line which reached more than a dozen states, the Iowa Northern Railway is contained entirely within the state and is what's called a "short-line railroad." Other short lines in Iowa are the Burlington Junction Railway and the Cedar Rapids & Iowa City Railway.

"The short-line industry handles about one third of all of the rail business in the United States," Dan said. "We’ve become the ideal first mile or last mile to provide better service and local attention to customers. One of the biggest things the industry is doing is bringing companies back to rail that might not have used rail in 30 or 40 years."

Along with bringing back companies and laying rail, the Iowa Northern Railway has developed a yard in Manly that now has capacity for about 1,100 rail cars, according to Dan and Mark Sabin, which is quite the change from about 15 years ago.

But just having an active rail business for the Sabin family isn't enough. They want to preserve as much of local locomotive history as they can. So they opened up the Manly Railroad Junction Museum in downtown Manly with Brad (their nephew and Iowa Northern colleague). The museum, housed in what used to be Oltman’s Grocery store, is replete with old rail photos that Dan acquired, as well as all the tools of the trade an engineer might need. Dan said that they also bought land that they'd like to turn into an engine display area where people could ride bikes.

Driving along Iowa Highway 9 through Manly, it's difficult to miss a tribute to Arthur Sabin as his name is emblazoned on a 1962 engine that sits close to the train tracks. The engine was actually donated to the community by the family in the 2000s. But Mark Sabin doesn't know if that registers with people or not.

"Nobody but a railroader remembers it as a railroad town," Mark said. "One of the reasons for the museum is to keep it in people's hearts and minds."

Photographer Lisa Grouette stopped by a few favorite spots in Mason City to catch a view of the turning leaves. 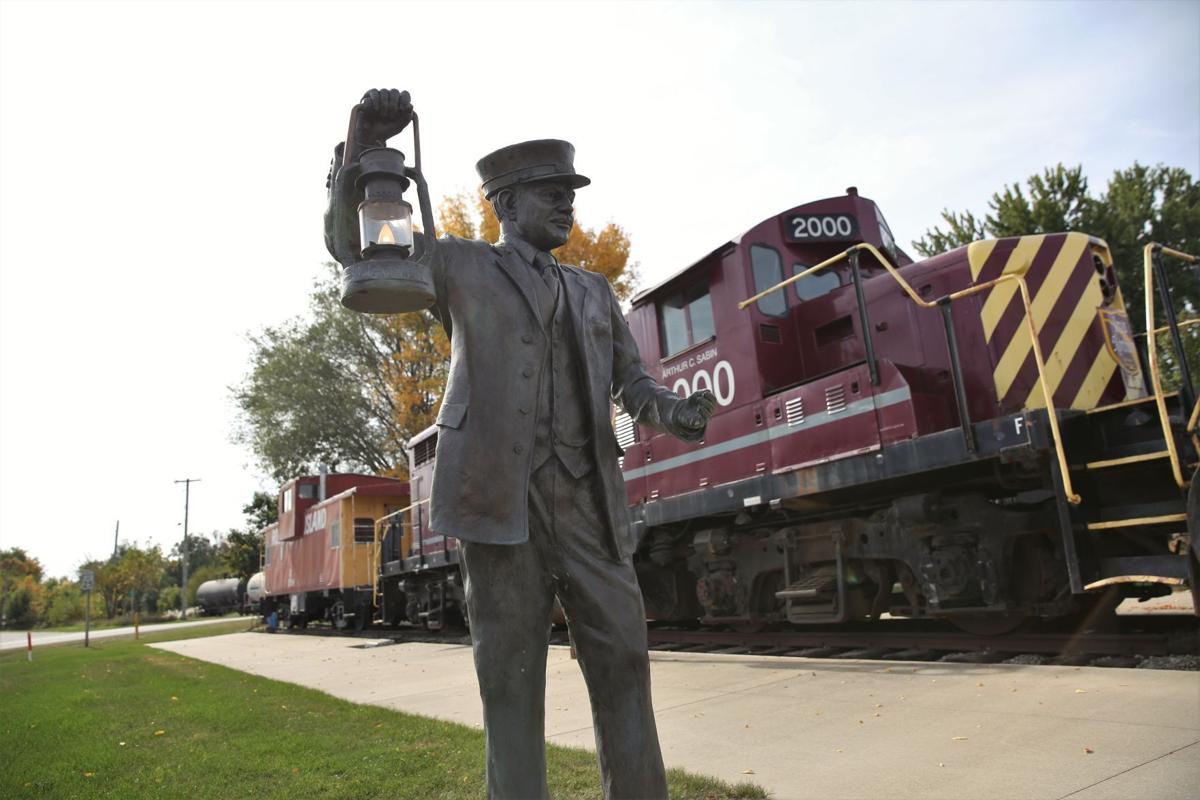 A statue which was made in the likeness of a Rock Island employee, stands along Highway 9 in Manly, alongside an engine and caboose. 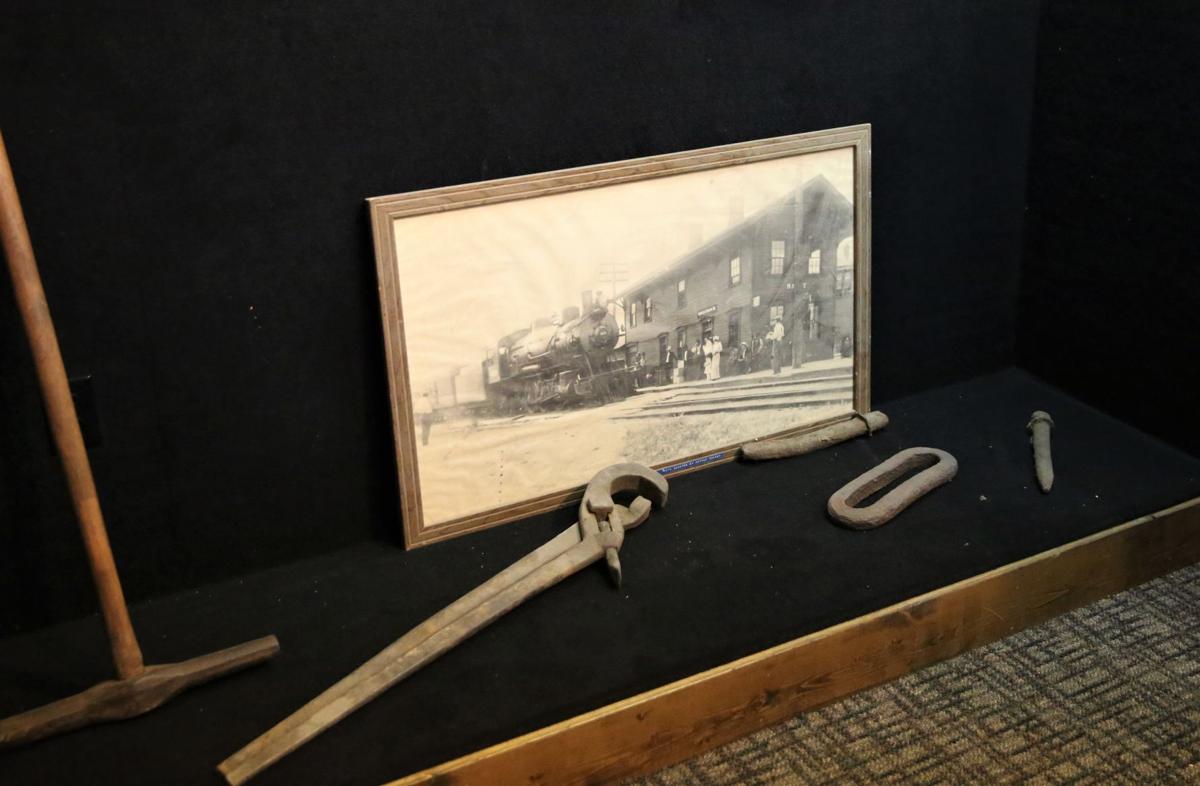 The Manly Roailroad Museum is home to a number of photos, equipment pieces, and artifacts spanning the century in age. 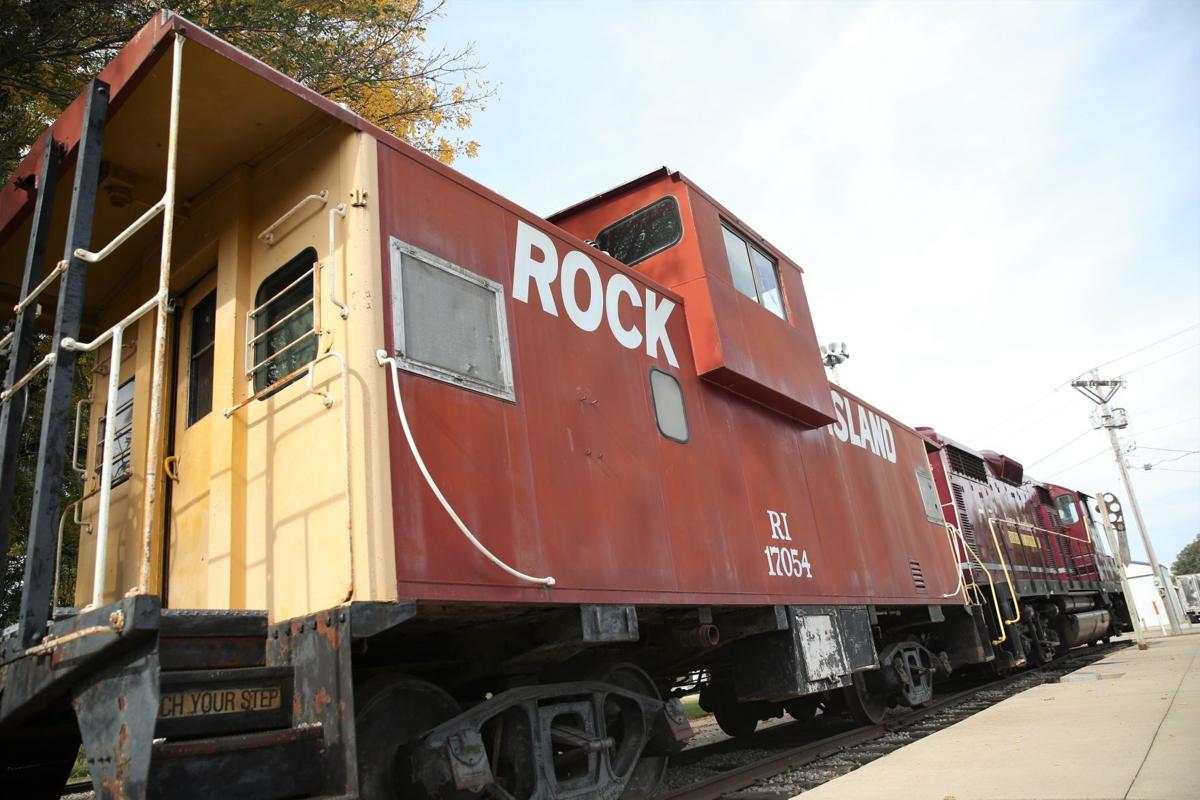 A Rock Island caboose and "Iowa Northern Railway" engine are permanently parked near the rail crossing on Highway 9 in Manly. 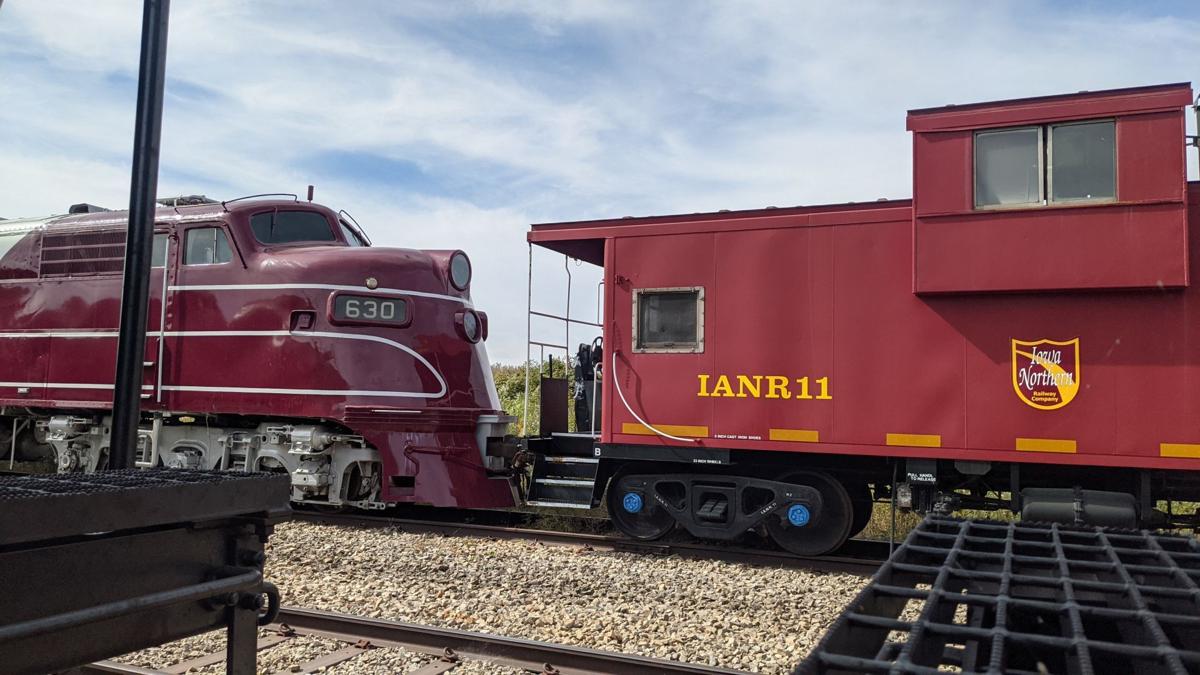