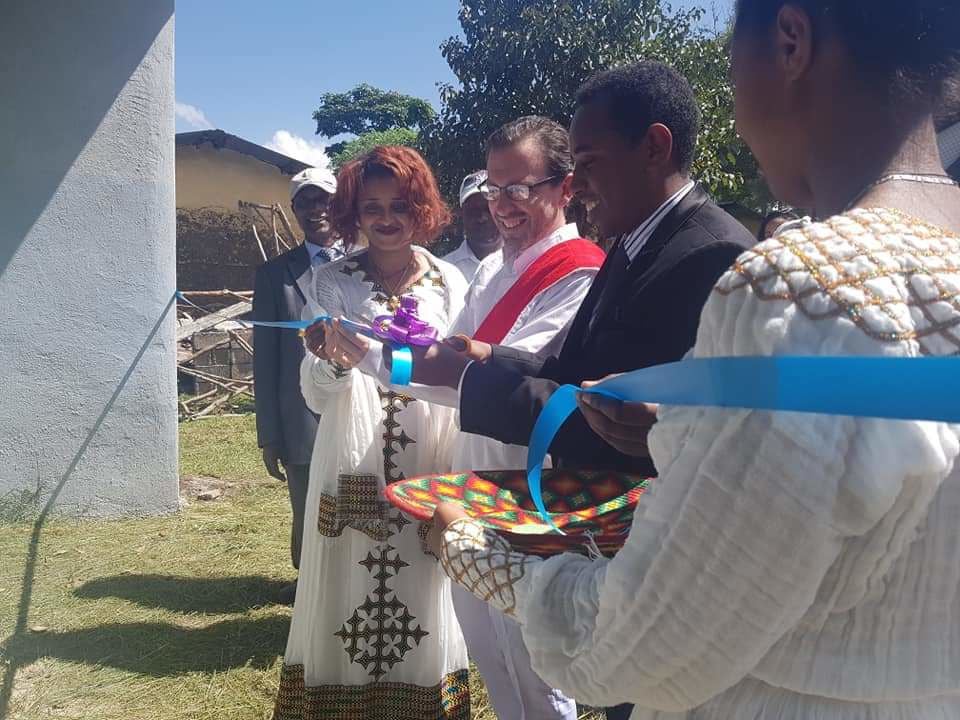 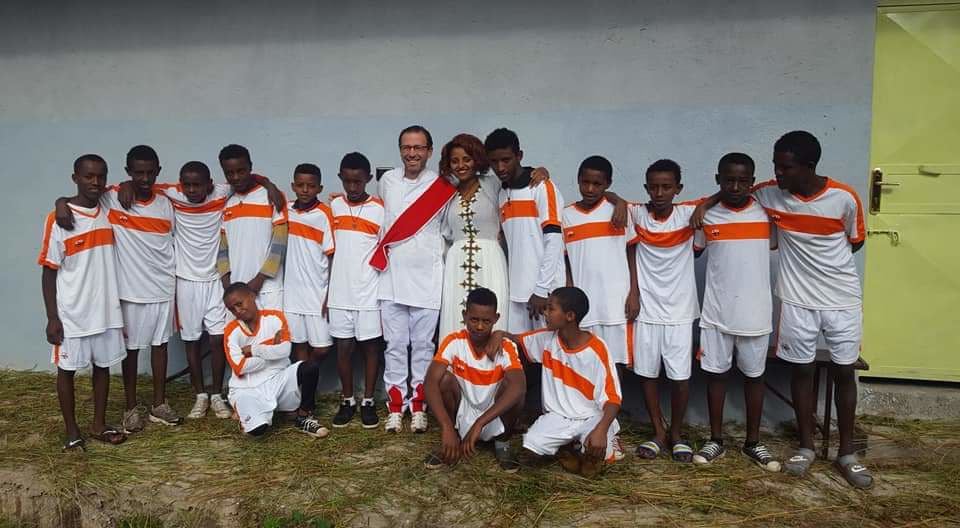 Jason Bell and his wife stand in front of the new school with some of the students. 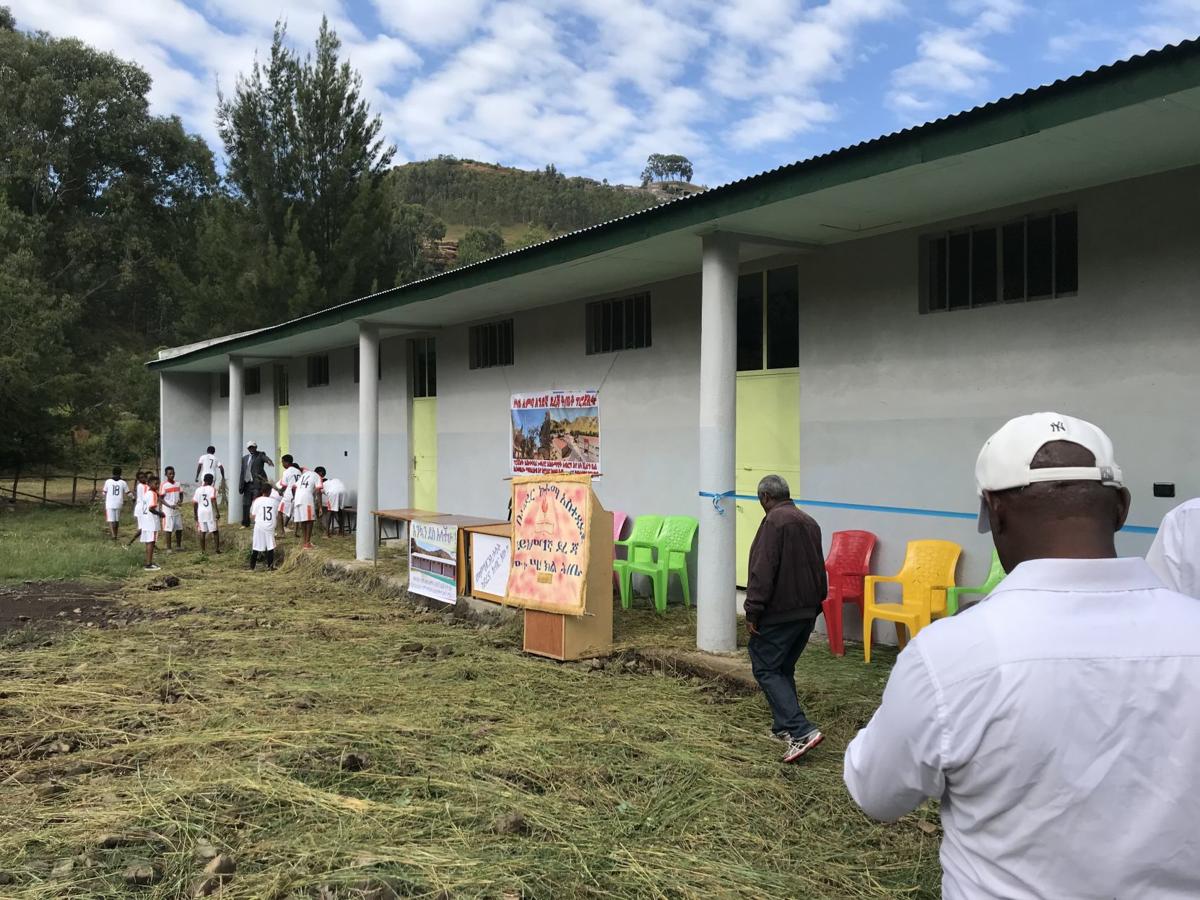 The first four new classrooms were open and ready for grades 1, 2, 5 and 6 by the time the school year started fall 2019. 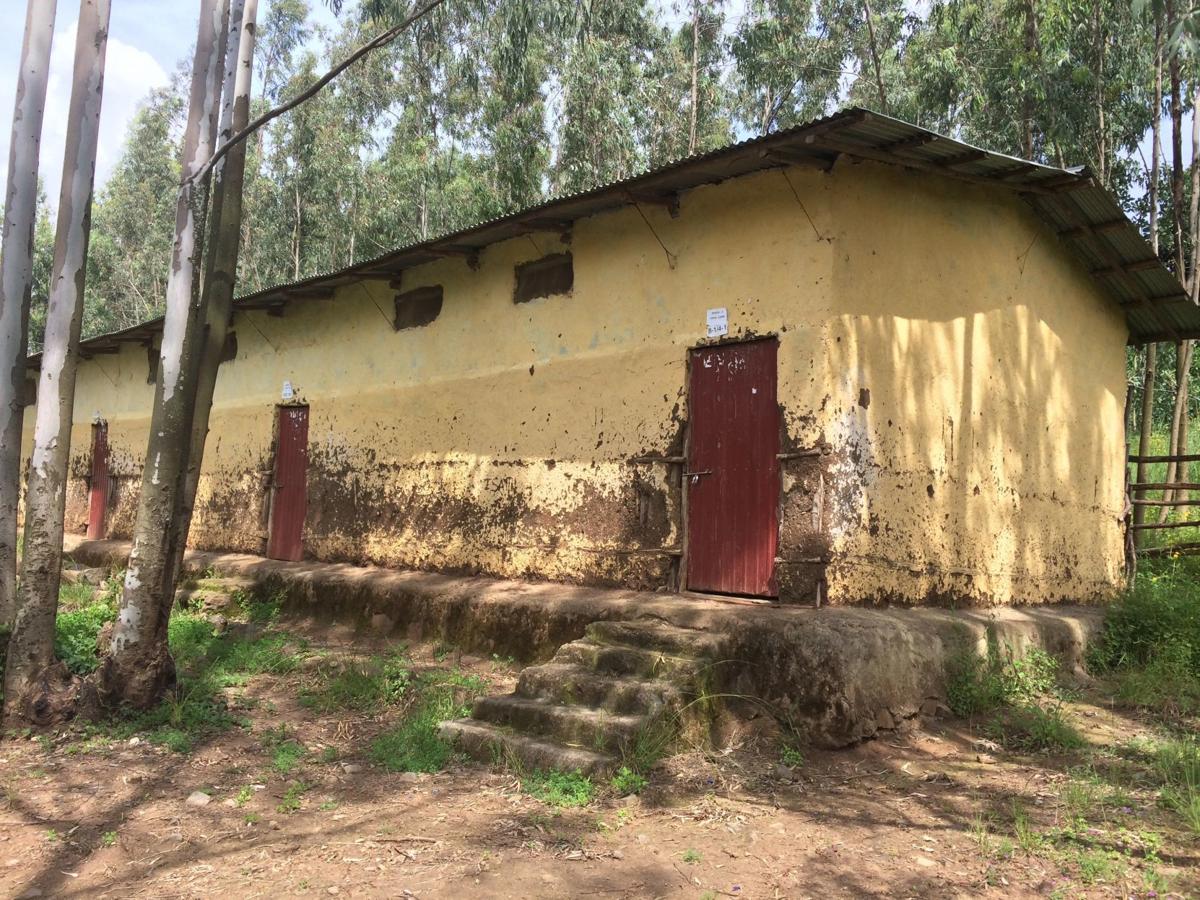 The 30-year-old school, with small windows and made of mud and sticks, was in complete disrepair, with nothing salvageable. 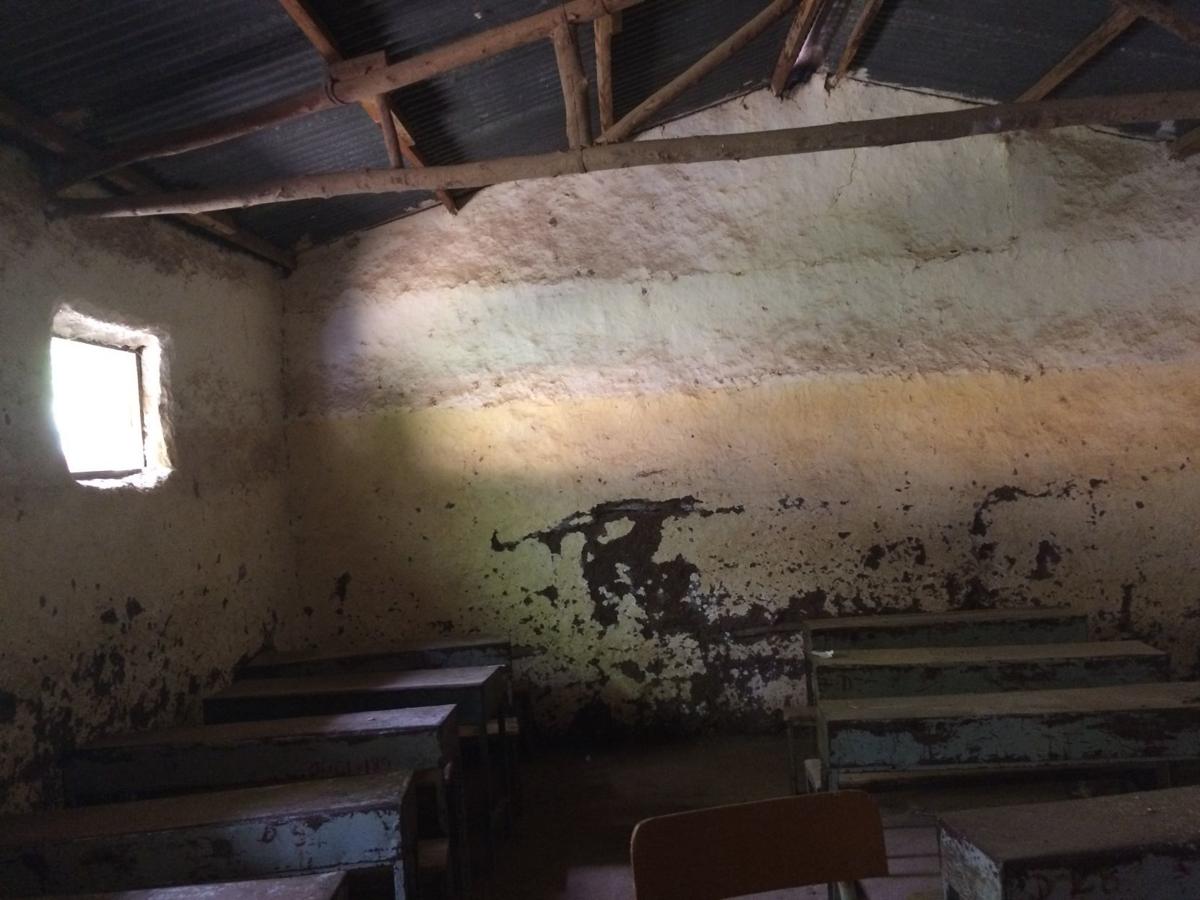 With small windows and little natural lighting, the old school created a dark environment for the students.

A former Mason City man and his wife have been rebuilding an Ethiopian primary school for the past year, and are now halfway finished with the project.

Jason, a Mason City High School and Wartburg College graduate, was working with refugees living in the United States in Minnesota and Chicago, but after a few years decided he wanted to work with them in Africa.

“I kind of became curious and interested in working on the other side of things, so I moved to Kenya originally and since then I’ve been working with refugees in different parts of Africa for the last 10 years or so,” he said.

He’s since worked in Kenya, Malawi and, for about the past seven years, Ethiopia.

Affi grew up in Gondor, and she and her mother had been purchasing school uniforms for the students who needed the support the most about two years ago. During the second year, Jason said they decided they wanted to do something more.

“We felt like the students could have the nicest uniforms or test materials to learn in but if the school itself is in crumbling condition, that really wouldn’t get us very far,” Jason said.

The school is a public school with eight total classrooms, split in two blocks of four classrooms, that serves 650 students in kindergarten through eighth grade.

Built more than 30 years ago, out of mud and sticks with no improvements or repairs made on it since, the classrooms were in terrible condition.

Affi, an electrical engineer, and her sister, a civil engineer, took a look at the buildings with some friends who also work in that sphere and came back saying the classrooms and school in their current state could not be salvaged, Jason said.

Jason and Affi then set up a GoFundMe page with a goal of $15,000, trying to start raising money from family, friends, community members and other people to be able to build new classrooms for the school.

People from all over the world have helped with donations through different ways: online, some simply donated money; in the community, people bought materials and donated those; and people with construction skills donated their time and skills to the project.

Between the donated money and materials, Jason estimated it took just under $20,000 to build the four classrooms just finished a few months ago.

They built as they received the donations, preferring to not go into a building stage until they knew they had the funds to pay for it all, Jason said.

While the old classrooms were dark with little natural light and no electricity, “a pretty grim environment for children to learn in,” the new classrooms are made of concrete with electricity and brightly painted walls.

“We really tried to create a more positive, bright, lively environment for students to learn in, so we’re pretty happy with how they turned out with how the classrooms have turned out,” Jason said.

Additionally, they had an agreement with the local university local government education office in which, if Jason and Affi could build the new classrooms, the university and education office would supply the school with new desks, blackboards and computers for the students to have the materials they need to learn, Jason said.

Jason said they worked closely with the school and the local youth association to help mobilize support and keep them updated on the project’s progress.

They also update their GoFundMe page so people who donate know their money is being put to good use, Jason said.

Currently, $10,065 has been raised through the GoFundMe page.

People who would like to donate to the school project can find the GoFundMe page here.

Lime Creek Nature Center is open again to the public after a number of enhancements were made to the interior of the building.

Iowans who like surprise endings might want to pay attention to this year’s session of the Iowa Legislature.

A Webster City contractor has received the bid for the next phase of the Clear Lake City Beach enhancement project.

Jason Bell and his wife stand in front of the new school with some of the students.

The first four new classrooms were open and ready for grades 1, 2, 5 and 6 by the time the school year started fall 2019.

The 30-year-old school, with small windows and made of mud and sticks, was in complete disrepair, with nothing salvageable.

With small windows and little natural lighting, the old school created a dark environment for the students.