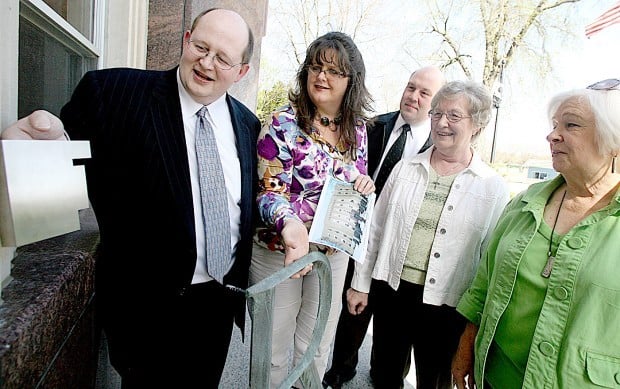 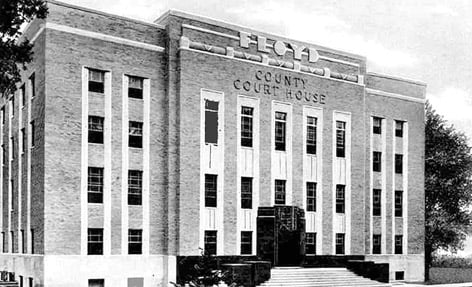 CHARLES CITY — After an absence of nearly 50 years, the word “Floyd” will again appear on the front of the brick and limestone Floyd County Courthouse.

The Floyd County Supervisors voted Tuesday to accept a recommendation from the Floyd Sign Committee to restore the missing lettering, which was removed in 1965, with new stainless steel letters welded to recreate the sculptural look of the original limestone letters, County Auditor Gloria Carr said.

The letters will be styled in the original Art Deco font. The committee recommended the new letters be purchased from and mounted by Frankensigns, located in Center Point.

“The supervisors will now work on a fundraising plan,” said Carr, a member of the Sign Committee.

When funding is in place, the sign will be completed. No taxpayer dollars will be used.

Built in 1940, the courthouse is listed on the National Register of Historic Places. Hansen & Waggoner of Mason City, now Waggoner & Wineinger, were architects.

Architect Ed Wineinger was consulted during the committee’s review process.

In the original design, the word “Floyd” was carved from Indiana Select Bluff Limestone on a parapet above the roof of the courthouse. Cast bronze letters were used to spell out “County Court House” beneath the parapet.

The parapet was removed from the building in 1965 after it was determined it was causing several leaks in the courthouse roof.

“The problem with limestone is that it expands and contracts differently than the brick,” said Committee Chairman Charles Thomson of Charles City and Chicago.

Within five years of the completion of the building, the roof was already leaking, Thomson said.

The limestone letters have been lost and may have been used as fill in the county in succeeding years, the Sign Committee concluded.

In 2011, the removal of the bronze lettering for “County Courthouse” during a brick replacement project presented “an opportune time” to consider replacing the word “Floyd” to the signage, Supervisor Mark Kuhn said.

The new letters will be of brushed stainless steel at a height of 42 inches. Stainless steel was chosen as the most cost-effective option and one that would withstand harsh Iowa winters, the committee said.

The Committee also recommended that the 72-year-old lettering for the words “County Courthouse” be reinstalled below the word “Floyd” but that “courthouse” be divided into two words, as it was originally.

The committee spent seven and a half months researching the project. Its recommendation has been favorably reviewed by the State Historic Preservation Office.