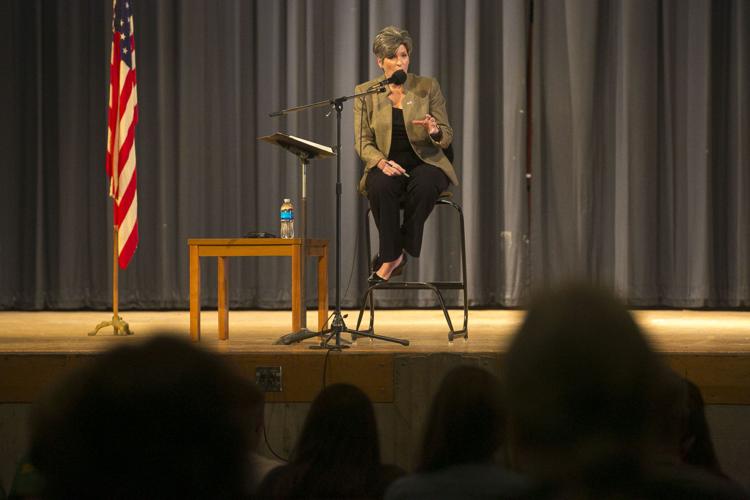 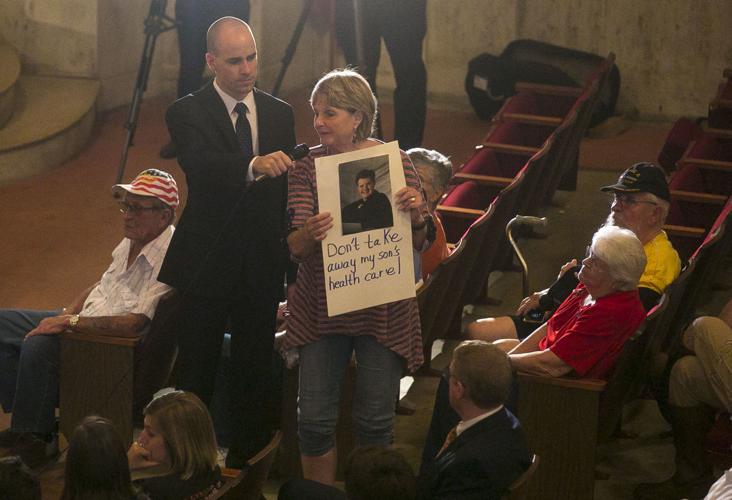 Ellen Doll-Brewer of Charles City asks U.S. Sen. Joni Ernst a question about  potential cuts to healthcare services in Iowa while holding a sign with a picture of her son at a town meeting in Charles City. 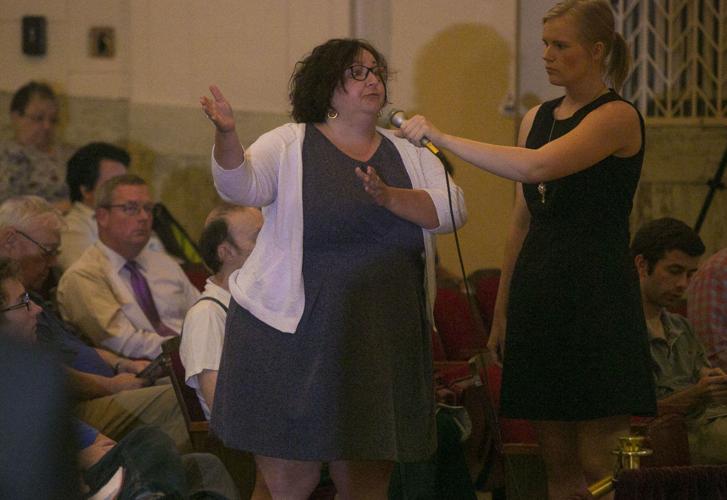 Laura Wright of Decorah comments to U.S. Sen. Joni Ernst during a town hall meeting in Charles City about the lack of healthcare services in rural Iowa causing residents to seek service out of state.

CHARLES CITY | With a Senate vote on the Graham-Cassidy health care bill looming, that topic was the main focus of discussion Thursday afternoon for Sen. Joni Ernst and about 100 people at a town hall at the Charles City Schools' North Grand Auditorium.

Many audience members expressed concerns to Ernst about losing coverage and rising premiums under Obamacare, along with the time it has taken Republicans to try and repeal and replace the latter.

Ernst told them that bipartisan efforts, led by Sen. Lamar Alexander, R-Tenn., and Sen. Patty Murray, D-Wash., were thwarted last week, after the two had held "roundtable" discussions with politicians, activists and those in the insurance industry nationwide to attempt to reach a bipartisan solution.

"The Democrats rejected every offer that came up on the table," Ernst said. "The bottom line [they had] is, 'We just want the money right now.' ... and it all imploded last week."

Those in attendance, however, continued to express doubts with the Graham-Cassidy bill, including Laura Wright of Decorah, who fears she will lose valuable medication under the new plan.

"If I don't have that, I become a cripple at 55 or 60," she told Ernst through tears. "Ethically, do you see it as your responsibility to ensure the state cannot offer a waiver so that they abandon me?"

She added that rural areas are at risk of losing a significant part of Medicaid funds through the new bill. Ernst answered that the Secretary of Health would decide whether state insurance would offer a waiver for medication, and added many rural areas throughout Iowa are facing similar issues.

Ernst also said the medication issue is complex because it is more of a health care issue, versus health insurance, which is what the Affordable Care Act is focused on.

Despite audience members voicing displeasure about health care throughout, the overall discussion was civil, with a few chirping in that it is time for Republicans to stop blaming Democrats for every issue that arises with drafting a new bill.

Ernst said she agreed with Trump's decision to end the executive order, but thinks Congress needs to determine a pathway to legal permanent status for dreamers, but she "draws the line with citizenship."

One area Ernst has disagreed with the President on his how he uses his Twitter account. Her response when Karie Shoop of Mason City asked about it was simple: "He needs to put the phone down."

Ernst told reporters after the town hall that she was particularly upset when Trump tweeted about the transgender ban on service members, surprising Secretary of Defense James Mattis.

"That's not something you should send out in a tweet," she said. "He does work quite well with his cabinet, but when he does that, he needs to stop and think about it before he does it."

Ultimately, Ernst said the main important issue facing Congress right now is health care. She said she is "leaning yes" on supporting the current Graham-Cassidy bill, but is unsure of whether it will pass.

"We need to figure this out," she said. "This has been one of the toughest issues we have been wrangling with all year, and if it's brought up, I hope we have the votes to pass it. ... If it fails, it fails, and we try something else."

IOWA CITY — Health care was at the top of voters’ agendas at a town hall meeting with U.S. Sen. Joni Ernst in Iowa City on Friday, even as the…

Ellen Doll-Brewer of Charles City asks U.S. Sen. Joni Ernst a question about  potential cuts to healthcare services in Iowa while holding a sign with a picture of her son at a town meeting in Charles City.

Laura Wright of Decorah comments to U.S. Sen. Joni Ernst during a town hall meeting in Charles City about the lack of healthcare services in rural Iowa causing residents to seek service out of state.