Belmond-Klemme junior Zackry Brannen first heard about his district's teacher contract negotiations from his mother and from an article in the Globe Gazette.

"It didn't sit right with me," said Brannen, who is the junior class president.

What didn't sit right, according to Brannen, was the fact that district administrators were seeking to remove from bargaining all non state-mandated items, leaving teacher base pay as the lone item to negotiate.

All other items, according to a state law passed in 2017, including longevity or education pay, holidays, overtime, sick or bereavement time, workloads and employment hours, are considered "permissive," meaning they can be negotiated but do not have to be.

Belmond-Klemme's Superintendent Dan Frazier has said the administration made the move in an effort to make contract negotiations, which have been tense at best in the last two years, less contentious. All of the permissive items will be put instead into a district handbook, which the administration will update, Frazier said in a late-March interview with the Globe.

CLARIFICATION: Several parts of this story have been changed to reflect that there is a basi…

Teachers union representatives say that handbook is not a legally binding document, and puts any increase in pay, other than base wages, in the hands of the administration, who teachers say they do not trust.

"The board just signed another two-year contract with the support staff union," said Superintendent Frazier in response to emailed questions from the Globe. "This was the second time in the last three years we have reached a two-year deal, and both times the entirety of our bargaining was completed in under thirty minutes.

"However, over the last 15 years, bargaining at Belmond-Klemme has been some of the most contentious in the State of Iowa, and that bargaining took place under seven different superintendents."

After Brannen did some of his own research, he reached out to other student leaders and found out none of them were aware of the tension, either.

"So from there we went to talk with the principal," Brannen said. B-K High School Principal Greg Fisher told them as long as they did not disrupt school operations, they were OK to get involved, Brannen said. He also told them to get both sides of the story.

The research continued with the students meeting with teachers at all levels. What they heard, according to Brannen, was "terrible."

"The teachers don't like working under the current administration because they don't like how they're being treated," he said. Teachers told the students of years of receiving less than the cost of living in pay increases, and a constant stream of teachers leaving the district due to poor working relations with the administration.

The teachers' responses proved alarming enough to the students that they took their concerns to Superintendent Frazier. And there, Brannen said, they received another surprise.

"First and foremost, he accused us of being put up to this by the teachers," Brannen said.

Brannen said Frazier pressed the students on where they got their information, and then informed them that the teachers were violating district code by talking about the negotiations. Brannen said Frazier cited code 603.9r1, which states that teachers must refrain from advocating a position on partisan issues.

Though Frazier told the students he was grateful that they were interested in getting both sides, Brannen said, he then refused to discuss the negotiations with the students.

On April 15, Brannen, junior class vice president Kaitlyn Alfaro, and junior Shea Sopher took their concerns to the public forum of the B-K Board of Education meeting.

The three broke down why they became involved in the contract negotiations: concern about how the departure of veteran teachers will impact education, the lack of recognition teachers received for their work during the COVID-19 pandemic, the gap between adequate pay for teachers and the growth of the district's unspent fund balance, which tops $1.7 million.

Other than Superintendent Frazier's disagreement with the students' contention during the public forum that teachers have not received an increase in pay, no one on the board has reached out to the students, Brannen said.

The next step, Brannen says, is a little unclear yet, but will focus on creating greater awareness of the issue in the public's eyes. Next week is Teacher Appreciation Week and the students plan to participate.

"I see this having a waterfall effect," Brannen said. "This isn't just about the teachers, it also about the students. It's unfair to the whole community."

Take a stick, leave a stick at Belmond Bark Park

Every aspect of the park, from its stick library to its plentiful supply of tennis balls, wouldn't have happened without community help.

It was a win some, lose some sort of day for Gov. Kim Reynolds, who celebrated the success of one of her top priorities for Iowa’s 2021 legislative session, but also conceded work on another priority will have to continue another year. 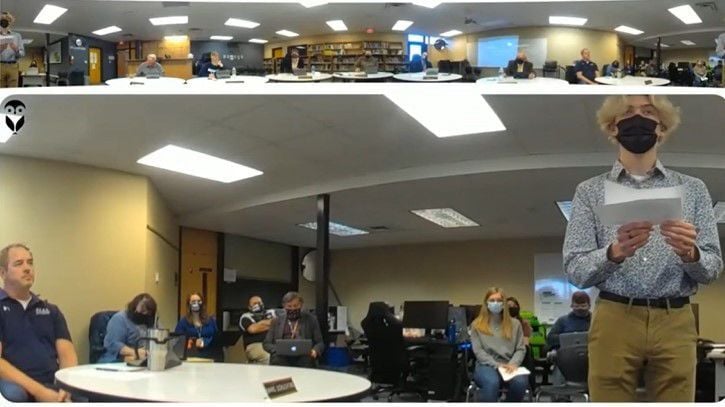 Belmond-Klemme junior Zackry Brennan speaks to the school board during the public forum on April 15. 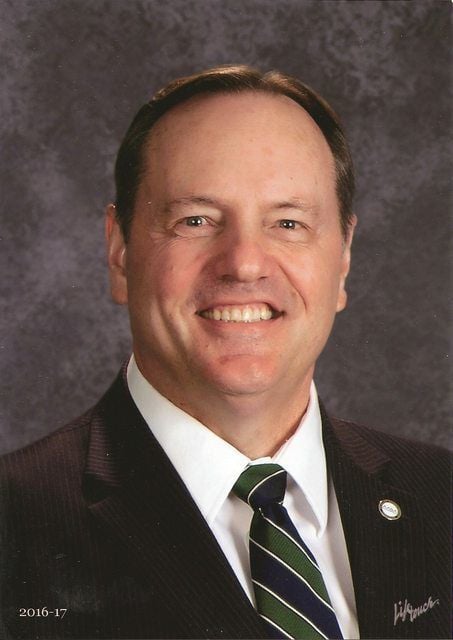