A formal letter from the Saint Regis Mohawk Tribe, located in New York, has asked for the end of the usage of the "Mohawk" mascot for the Mason City Community School District.

The letter, which was sent by Saint Regis Mohawk Tribe’s communication director Brendan White, was sent to Superintendent Dave Versteeg and school board president Lorrie Lala on Friday.

The Tribal Council of the Saint Regis Mohawk Tribe informed the school district they stand in unison to stop the use of derogatory and harmful stereotypes of Native Americans, which includes usage of Native Americans as mascots, according to the letter.

“Secondary school systems and educational systems that promote ethnic stereotypes – despite the civil rights movement that took place decades ago – still have not fully embraced racial equality and continue to do an injustice and disservice the young impressionable students under their guidance,” the letter says. “Their failure to take corrective action by immediately banning Native names and mascots only serves to perpetuate the negative and prejudicial treatment toward Native Americans and the contribution we have made and continue to make across the United States.” 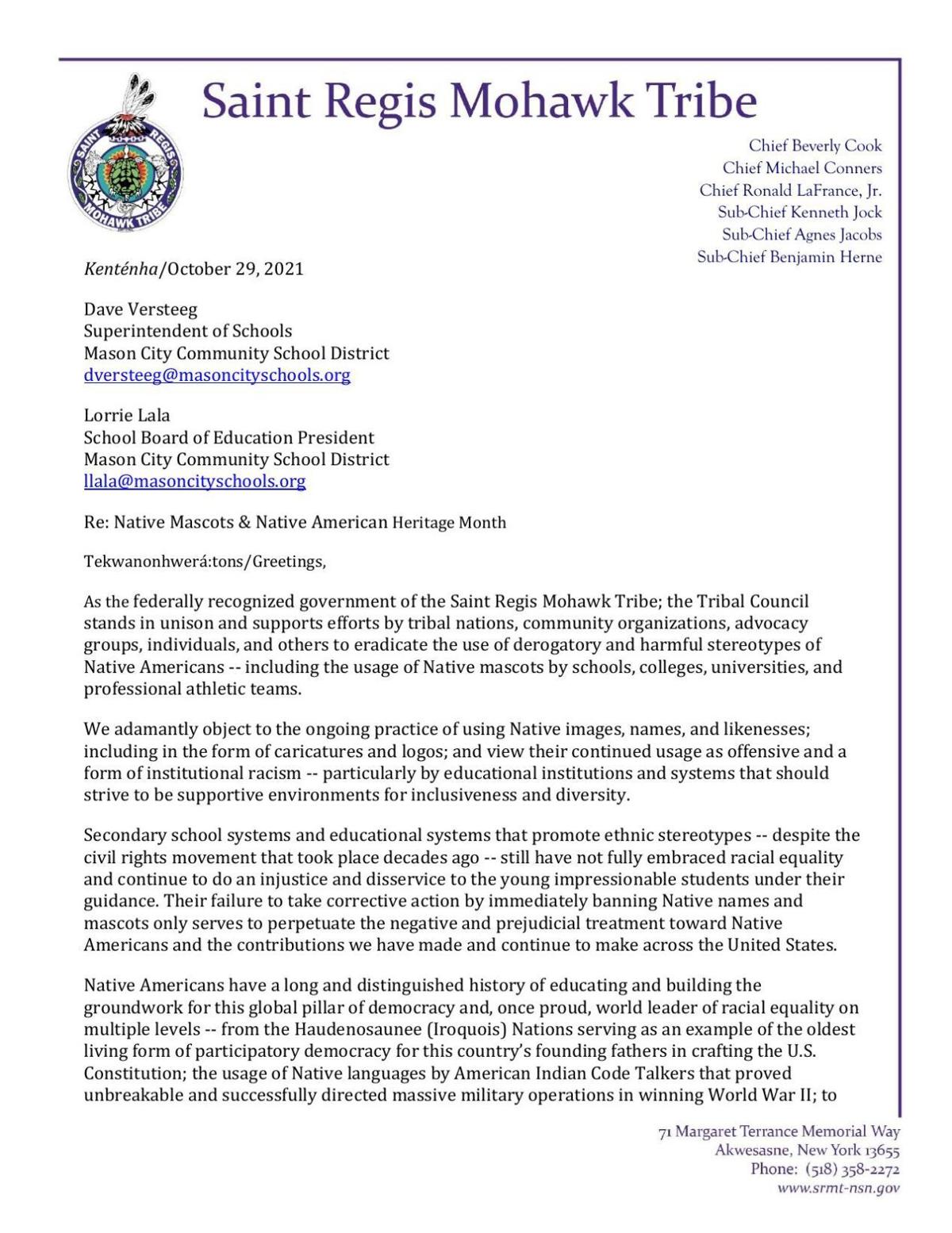 The letter also informed the district of the history Native Americans have had with “educating and building the groundwork for this global pillar of democracy.” The letter then called the district to raise awareness about the mistreatment and challenges Native Americans continue to endure, including investigating Indian residential and boarding schools, protecting Indigenous sacred sites, and preventing any more missing and murdered Indigenous women and girls.

“If the intent is to honor Native peoples, including the Mohawks, then the greatest form of flattery is to make our challenges your own. The time has surely come for all of us to be treated as equals and respected,” said the letter.

The letter comes amid the Mason City School Board's ongoing academic and athletic logo redesign project, which has raised discussions about whether to keep or change the usage of its "Mohawk" nickname and logo.

School board president Lorrie Lala said she appreciated the Saint Regis Mohawk Tribe's response before their meeting on Monday. Lala added she didn't speak on the behalf of the board, but she personally believed they needed to respect the Mohawk's wishes.

"A lot of your identity is tied up with your mascot and I know that we haven't met yet, but we will all have to be in agreement," said Lala.

Lala says she is also glad to have documentation of what the Mohawk tribe wants and their feelings regarding the current mascot. With the documented response, it will help with the discussion among board directors and with the community, according to Lala.

"If the people find the use of the tribe name and images offensive and denigrating, we should respectfully find a new school mascot name," said board director Alan Steckman. "If, instead, we can in some non-offensive way enhance the name and image of the tribe, then we should move on with the Mohawk name. Emphasizing the respect for a great contribution to American and local history."

School board directors Jacob Schweitzer and Peterson Jean-Pierre were contacted about the letter and did not want to give their responses until reading, but ultimately did not respond ahead of press time. Voicemails were left to board directors Brent Seaton and Jodi Draper, but they didn't return the calls.

On Friday morning, the Mason City Community School District acknowledged the receipt of the letter on its Facebook page.

"The Mason City Community School District has received communication today from the Saint Regis Mohawk Tribal Council in response to our inquiry about the use of the Mohawk name, logos, or symbols," the post said. It then went on to share that "logo and branding update" is an agenda item at its upcoming committee of the whole meeting on Monday, Nov. 1.

That meeting will take place at 5:30 p.m. in the Instructional Support Center of the Administrative Center.

A statement was released late Friday afternoon from the American Civil Liberties Union (ACLU) of Iowa about the recent mascot situation in Mason City and other communities.

"Using such mascots for sports teams is damaging and disrespectful," says the statement from ACLU of Iowa Executive Director Mark Stringer. "They perpetuate negative and cartoonish stereotypes, inappropriately represent sacred and religious traditions, and are especially offensive given the long history of oppression against indigenous peoples. Some Iowa Schools, like Marion, have already retired their mascot and we encourage all other Iowa schools to do the same. Retiring these mascots is the right and respectful thing to do. Retiring these mascots also ensures compliance with the purpose of anti-discrimination laws."

6th through 8th grade students are invited to participate in Minnesota Rubber & Plastics’ Young Innovators contest and win STEM supplies for their school.

Although no decision was made at the Monday night meeting, the conversation among the Mason City School board directors had a common theme: it's time to change the mascot.

In terms of where Clear Lake students are at with learning, Superintendent Doug Gee says there is nothing to panic about when looking at the data.

Grease takes the stage in Charles City on Nov. 5

There ain’t no rules from holding you back from seeing Charles City High School performing Grease this week.

Staff cuts could be imminent for Mason City School District

With decreases in certified enrollment in Mason City Community School District, staffing reductions might be in store for school buildings.