At the request of Mason City community members, the Mohawk mascot debate will return to the Mason City School District Board of Education agenda at its Dec. 20 meeting.

Last month, the Mason City School Board decided to end the use of the name “Mohawks,” at athletic events and on merchandise. Over the long term building signs and school décor will also be scrubbed of the name, as the district assesses costs related to rebranding.

Shortly after the decision was made, Mason City resident Tom Stalker created the "Mason City Mohawk Save the Name" Facebook page. The group has shared their frustrations about the decision and was given time to speak at Monday night’s meeting.

Stalker's committee had organized a "Pack the Parking Lot" demonstration outside and in the doorway of the administration building before the meeting. Over 40 people endured the cold and took part in the demonstration with signs and Mohawk apparel.

When asked if they could compromise and let go of the name, a majority of them said that change was not an option for them and that they would like to remain with "tradition."

Stalker was given 10-15 minutes to present his group's reasons to keep the Mohawk mascot. After the presentation, the school board was given the option to ask questions.

After taking the podium, Stalker presented to the school board a petition with a total of 1,677 signatures. According to Stalker, 696 signatures within the petition are Mason City residents. With a valid petition that has signatures from 500 or more residents, an item can be placed on a board agenda, per its policy 213.

“We are requesting the Dec. 20 board meeting a change of venue made to accommodate an expected larger crowd and location change be shared in a timely manner through public notice. Reasonable time allotted for six persons from our group to speak,” said Stalker. “Our goal is, along with the board members, is to come to an agreement on the use of the Mohawk name and logo for MCHS (Mason City High School).”

Barbara Hovland, a Save the Name committee member, shared information she had received from a public information request to Superintendent Dave Versteeg. Her request was for all possible communication in regard to the topics of mascot name change and the Saint Regis Mohawk Tribe. Hovland said she had issues with the timeline she was emailed about and what was published in the Globe Gazette.

“The letter from the Saint Regis Mohawk Tribe is not signed by any one person and only states they object. The removal of a school mascot that’s been used since 1925 and such a hot button issue is being rushed without due diligence,” said Hovland.

Stalker shared with the board the history of the Mason City Mohawk Save the Name Facebook group and how he believed the school board was ending the Mohawk tradition. Stalker mentioned that his Facebook page has over 2,000 members from across the nation.

Stalker said the selection of the name “Mohawk” had been done to give generations to come something to be proud of. Stalker gave examples to the board where Mohawk had been used in company names and with vehicles. He added that the Saint Regis Mohawk Tribe in New York is not recognized by the state of Iowa.

“The point I’m getting at is how do we not have the right to use the Mohawk name we have used for 96 years and after almost 100 years of using the Mohawk name, we have no issues. Then one person sends a letter to contact the Mohawk tribe then the school board decides to change that 96-year tradition,” said Stalker.

“Something that has been around for 96 years deserves a lot more input than one short school board meeting. It needs to be public input and research,” said Stalker. “I want to thank everyone from our group who has came out tonight and supported the Mohawks. Thank you, go Mohawks.”

No one else spoke at the meeting and the board had no questions or comments. The Mason City School Board will put the Mohawk mascot discussion on the Dec. 20 agenda, according to school board president Lorrie Lala.

Screen shots of the post have since been circulated on the social media platform, leading to the child's parent withdrawing him from school on Tuesday for his own safety.

Native American Guardian's Association holds forum to 'save the name'

Members of Native American Guardian's Association (NAGA) and Native American speakers held a forum with the Mason City community Sunday afternoon on why they believe the Mohawk "name" should remain.

A staffing firm hired to fill Mason City's school superintendent spot plans to have a candidate selected by February.

Indigenous group holds forum in response to 'save the name' group

Indigenous advocates, academics, and allies met virtually Sunday night to discuss why they believe it is important to remove Native American mascots in Iowa.

Mason City School Board to receive student-created survey about mascot

A Mason City Community School District students and staff survey summary on the Mohawk mascot has been given to the school board.

After public forum, school board holds firm in decision to nix Mohawk name

The decision to drop the name “Mohawks” was upheld by the Mason City School Board at its meeting Monday night, after the item was brought up f… 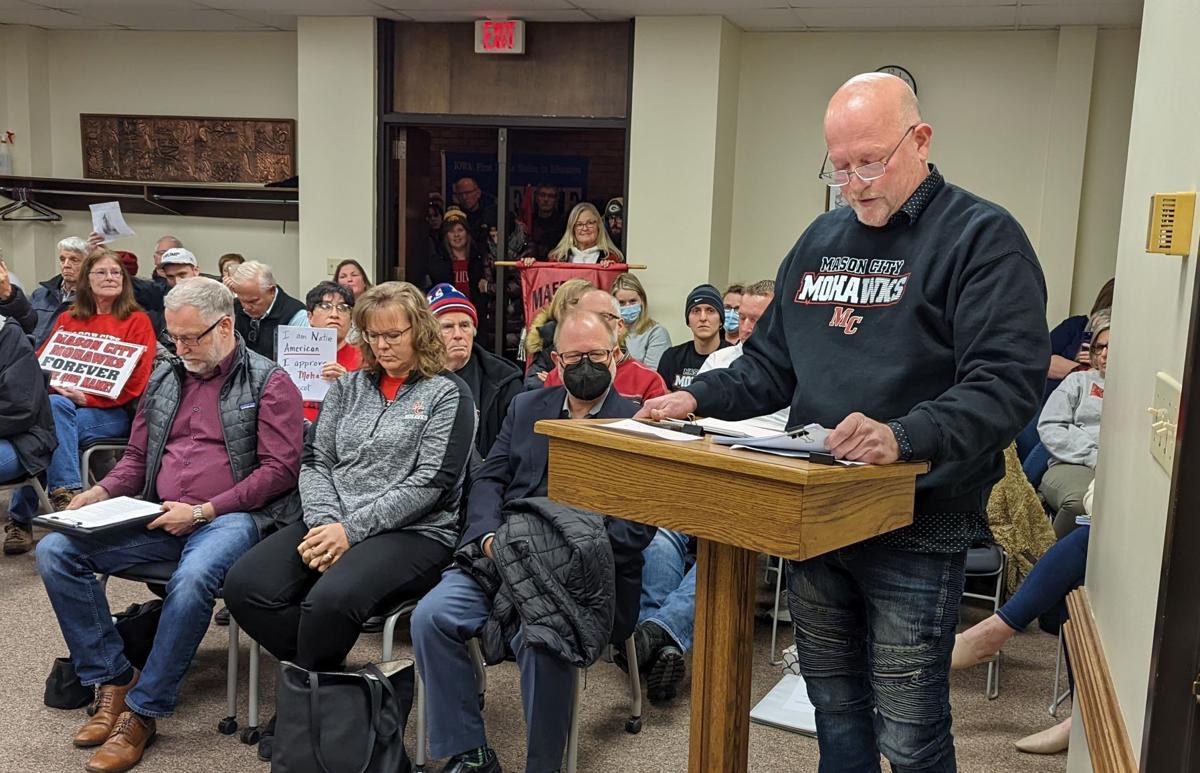 Mason City resident and "Mohawk Save the Name" Facebook group founder Tom Stalker speaks to the school board during a board work session Monday night. 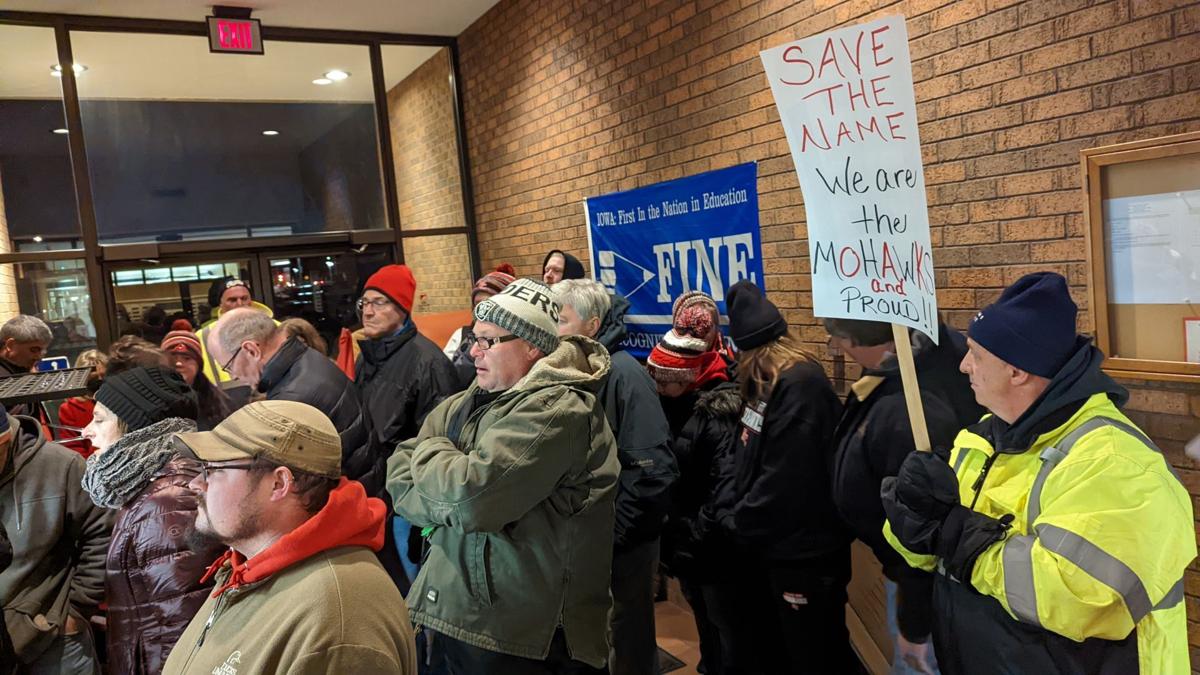 Protesters in favor of keeping the Mohawk name stand inside the Mason City School Administration building as a school board work session takes place Monday night. 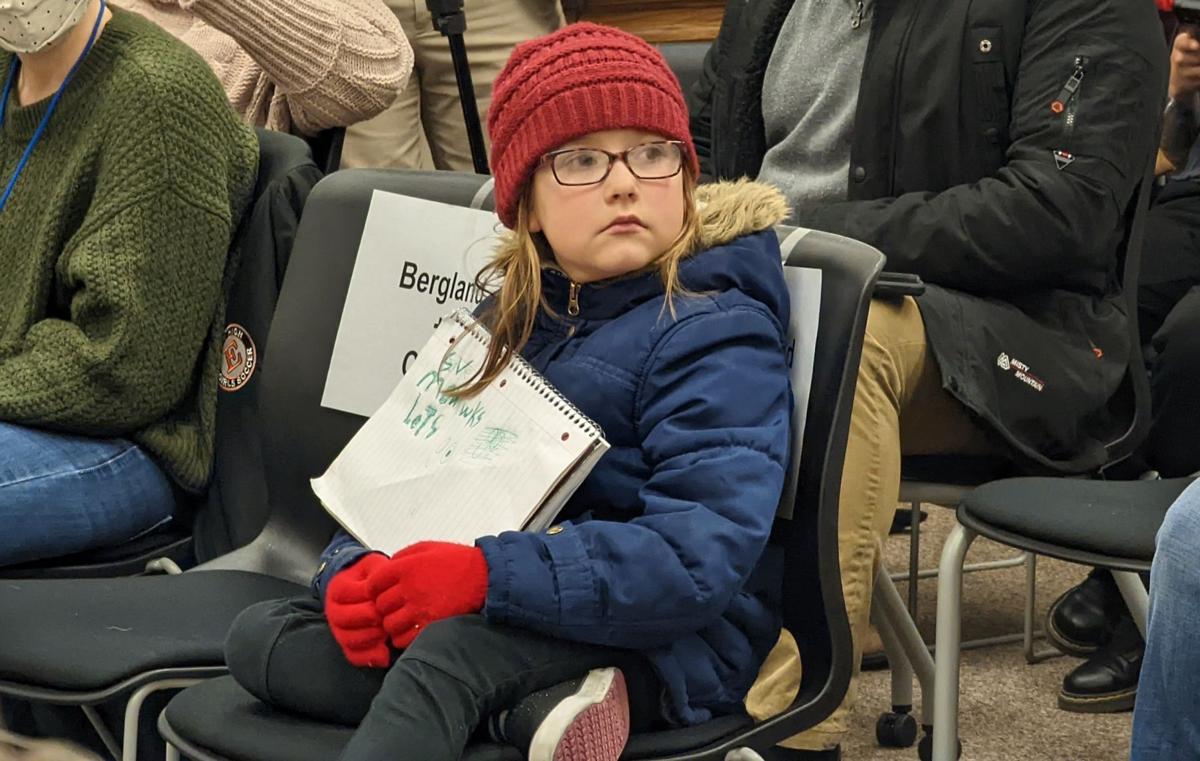 A young girl in attendance holds up a sign in favor of keeping the Mohawk name during a Mason City School Board work session Monday night.