Jefferson Elementary Kindergarteners Vera Burgus, Aubrey Bahr, and Maggie Murray, along with third-graders Max Davis, Gregor Adams, and Dhante Mateo-Mendoza talk about the vandalism on their playground, which resulted in two drums at the music station being destroyed.

$25 million can only buy you so much.

The Mason City School District's new fieldhouse and pool project, when completed next year, will be state of the art:

But that's really just the shell, says local businessman Phil Johnson. Johnson is the chair of The Future is Now Committee, whose task is to raise $750,000 to outfit the fieldhouse project with top-of-the-line equipment that will match the quality of the buildings in which they are housed.

More information about the sponsorships, which start at $100, is available on the campaign's website at mohawksfuture.org.

If you have questions about the project, you can email The Future is Now campaign chair Phil Johnson at Phil.Johnson@ampf.com

The group's list is long and features items as inexpensive as $600 judge's flip cards for the pool to a third of the total they hope to raise for weight room equipment. It will all be first rate equipment, Johnson says, because the people on the committee and alumni helping them know what they're talking about. Scott Raridon Sr., who played on MCHS' 1978 state championship football team and was a strength coach for the University of Notre Dame football, helped design the weight room. Hugo and Gordon were both well-known swimmers and pitched in ideas toward the design of the natatorium.

Besides writing grant applications and making presentations (five so far) to local businesses, the group is fundraising in other ways. Sponsorships at several different levels starting at $100 are available in exchange for passes to events and/or recognition plaques. The group will also sell local businesses a listing on a directory that coaches coming in from out of town will receive to help them find places to eat and stay.

The crème de la crème fundraiser will be held this fall, when former MCHS state championship and University of Wisconsin-Madison football coach and athletic director Barry Alvarez returns to town to lend his voice to the effort.

Johnson said the facility will absolutely bring more competition to the area with more people who will need places to eat and stay and other things to do.

But that isn't all it will bring.

"If I was bringing a young professional with a family to Mason City for a job," Johnson said, "the first two places I'd bring them would be the arena and the high school.

"When this is done, there just won't be any other place like this anywhere and it will attract people to live here," he said.

Brodie Pedersen agrees. He's the Mason City plant manager for the Lehigh Cement Company, which recently donated $10,000 to the project. His company is giving the money because the project lines up with everything Lehigh believes is important in the community -- sports, kids and economic growth.

"This is an investment in our community," he said.

Cannonball organizers in Mason City in need of volunteers

Masks to stay in place at Mason City schools

The new pool can be set up in either an 11-lane or 8-lane configuration.

This illustration shows how the high school will look from the southeast when the fieldhouse and pool project is completed. 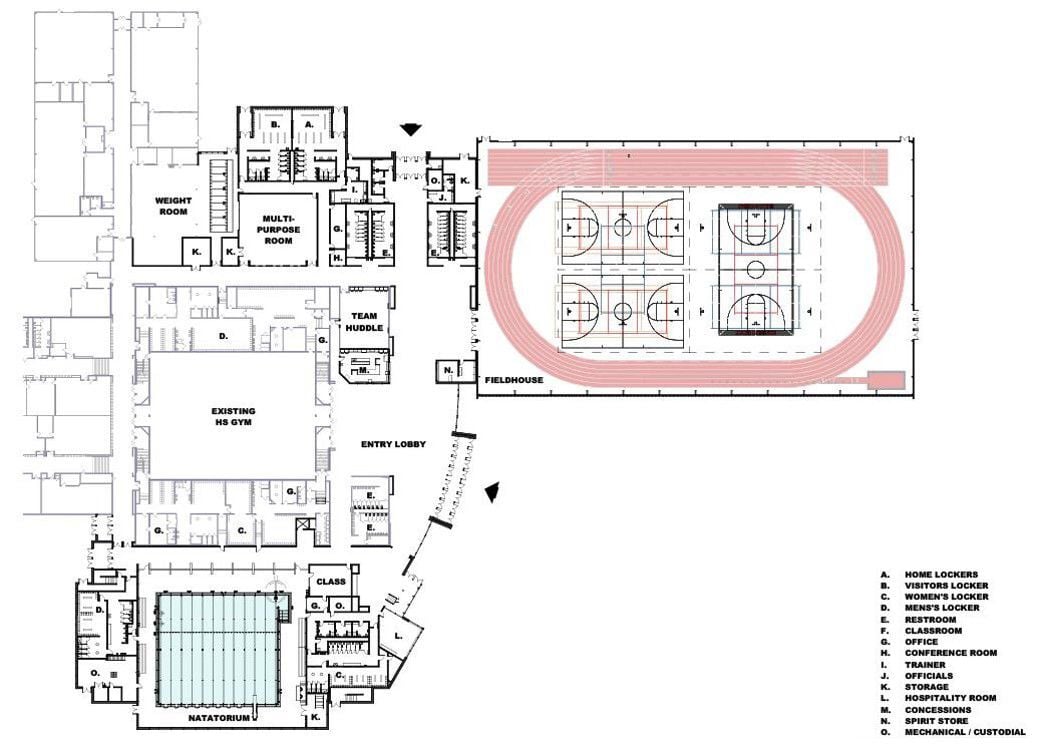 This schematic shows where the new amenities will be situated around the high school.