Through the power of state legislation and a Facebook page, the Mason City School Board may revisit the Mohawk name and mascot.

Last month, the Mason City School Board decided to end the use of the name “Mohawks,” at athletic events and on merchandise. Over the long term building signs and school décor will also be scrubbed of the name, as the district assesses costs related to rebranding.

The Mason City Community School District reached out to the Saint Regis Mohawk Tribe on Oct. 20, after the board and community members asked if the tribe would be open to a partnership and allow the use of imagery and name. The tribe responded on Oct. 28, and it asked for the end of the usage of the “Mohawk” mascot and nickname.

Five days after the decision was made, Mason City resident Tom Stalker created the “Mason City Mohawk Save the Name” Facebook page. The page gained 100 page members within an hour of its creation.

“I was sitting home on a Saturday night, I happened to start searching Facebook to see if anybody had set up a type of a thing to save the name and I couldn’t find anything. So I thought I’ll try and do it myself,” said Stalker. “It just went crazy with people joining the group.”

Stalker said he and others he knew were upset with the decision that the Mason City School Board made.

“After us having that for close to 100 years — the Mohawk name — and to determine in a matter of basically one meeting to eliminate it for future use, I think it was a hurried decision,” said Stalker.

The Facebook page has amassed a following of 2,566 members. The group ranges from class-of-1970 alumni to present-day Mason City school students. Most posts seem to express the group member’s school spirit and frustration over the name change.

“This is the question I have. I am not a Mohawk as I graduated from another school but my kids are. So with that being said, where would this stop if we let this happen? When PETA starts their thing over animal rights will there no longer be Bulldogs, Eagles, Lions?” wrote Dean Porter in a post. “This is ridiculous. It is a symbol to be respected by the teams that represent them, not tarnished. Rants over. Go Mohawks! For my kids.”

“How dare these outsiders try to take away what belongs to us! We are Mohawks, and we will not let our pride, culture, and history be destroyed from people who aren’t even from here!,” Grant Peterson posted to the group.

“Any protests that may be held will be far, far more effective if they take place at the homes of school board members at 11 p.m. If the board members don’t come out to discuss the concerns of their constituents, then start calling them. And keep on calling them,” Blodgett wrote. “The pro-keep-the-name-Mohawks side must view itself as the righteous cavalry – which, by definition, means the other side will be the … Indians.”

School board president Lorrie Lala and school board director Cindy Garza each noted they’ve not had anyone approach them in public or protest at their residences, adding none of the other board directors have reported any problems.

“I actually joined in favor of the change,” said Michael Oliver in a post. “Our baseball team is the Mustangs and I don’t see why other sports could change to show unity under that title.”

The page has also seen heated opinions posted, which ultimately violated the group’s posted rules. Stalker said he and other page administrators have moderated as best they can, and have had to remove several people from the page.

“Unfortunately, we have had to block people and eliminate the comments,” said Stalker. “I have really stressed to be respectful to the school board itself, and I’ve talked to Mr. (Dave) Versteeg about that, and gave him my word that if I hear of anybody that’s doing something they shouldn’t be doing, I will block them or take it out. I expect everybody on there to be respectful.”

Group members created a petition page on change.org to “Save the Mohawk Mascot,” which has collected 1,518 signatures as of Friday. Stalker posted on Wednesday that he turned in the petition to the administration building when there were just over 1,300 signatures. Lala said on Tuesday for the signatures to count within the petition, signees would have to live in the Mason City area and be vetted.

Stalker contacted Lala via email last month, inquiring about how to get the Mohawk mascot issue reopened and back on the school board agenda.

The Iowa Department of Education House File 868: Education Appropriations contains several provisions “related to diversity, equity, and inclusion.” One requirement of the law allows electors to place an item on the school board agenda for the next meeting, including concerns about curriculum.

Mason City Schools Communications Director Sue Deike said via email that Monday's meeting agenda will include a presentation from the “Mason City Mohawk Save the Name” group, followed by questions from the board.

Stalker said he formed a committee of 10 people, some of whom are current teachers and Mason City alumni, to become better organized for the presentation. The group has planned a “Pack the Parking Lot” demonstration outside of the administration building before the Dec. 6 meeting begins.

“I’m inviting our group members to come. They can either sit in their car, stand outside, whatever. They are to respect the school board members or anybody else, and are more than welcome to bring signs,” said Stalker.

Stalker said the points he will present to the Mason City School Board will come from conversations he has had with members of Native American Guardian’s Association (NAGA), a group that works to keep Native American logos and names in schools.

“I live out by the high school, and you see that beautiful addition going up and I think personally it should be called Mohawk Fieldhouse or Mohawk swimming pool just because of the tradition and that’s what I’m hearing from a lot of alumni people, too,” said Stalker.

Screen shots of the post have since been circulated on the social media platform, leading to the child's parent withdrawing him from school on Tuesday for his own safety.

Native American Guardian's Association holds forum to 'save the name'

Members of Native American Guardian's Association (NAGA) and Native American speakers held a forum with the Mason City community Sunday afternoon on why they believe the Mohawk "name" should remain.

It's tough, as a newbie in Mason City, to select five top stories from a year that you've only been around for half of. It's even harder when …

Mason City School Board to receive student-created survey about mascot

A Mason City Community School District students and staff survey summary on the Mohawk mascot has been given to the school board.

Watch Now: Which are the safest airlines? 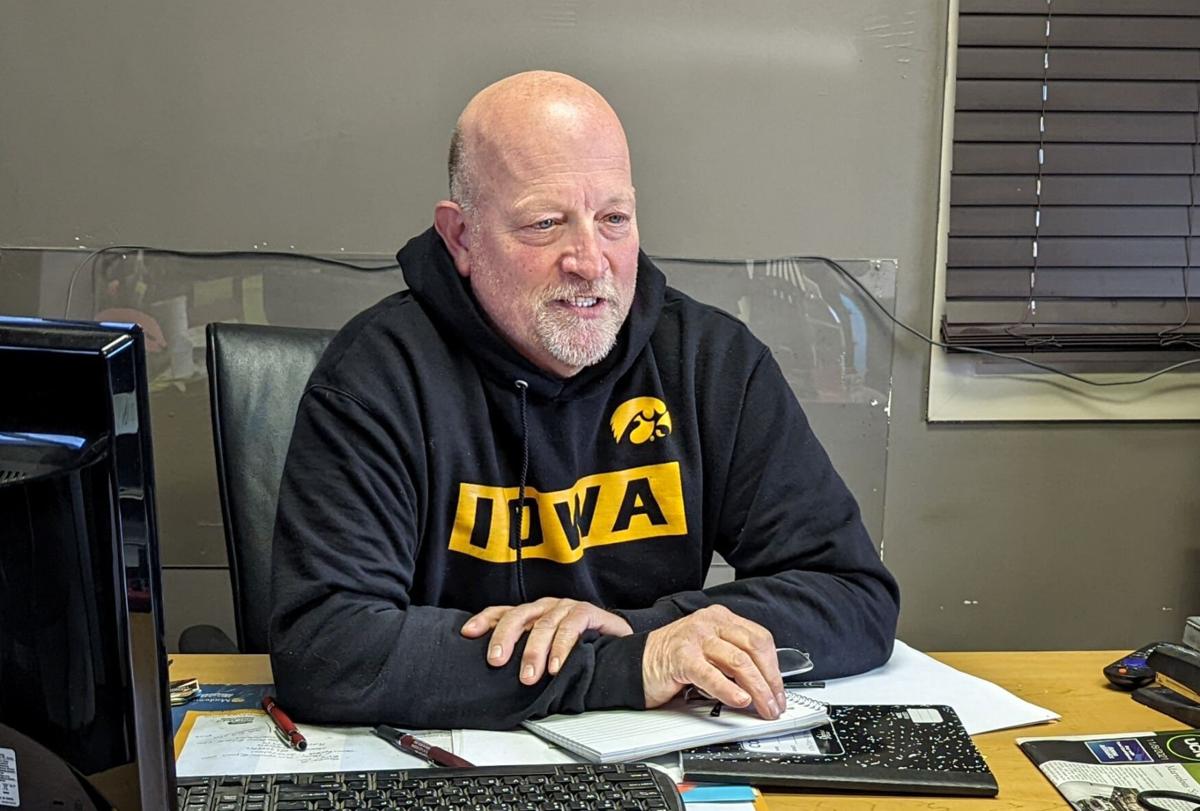 Tom Stalker, creator of the Save the Name Facebook page, talks about the reasons behind his opposition to the school board's decision to retire the Mohawk name from Mason City Schools. 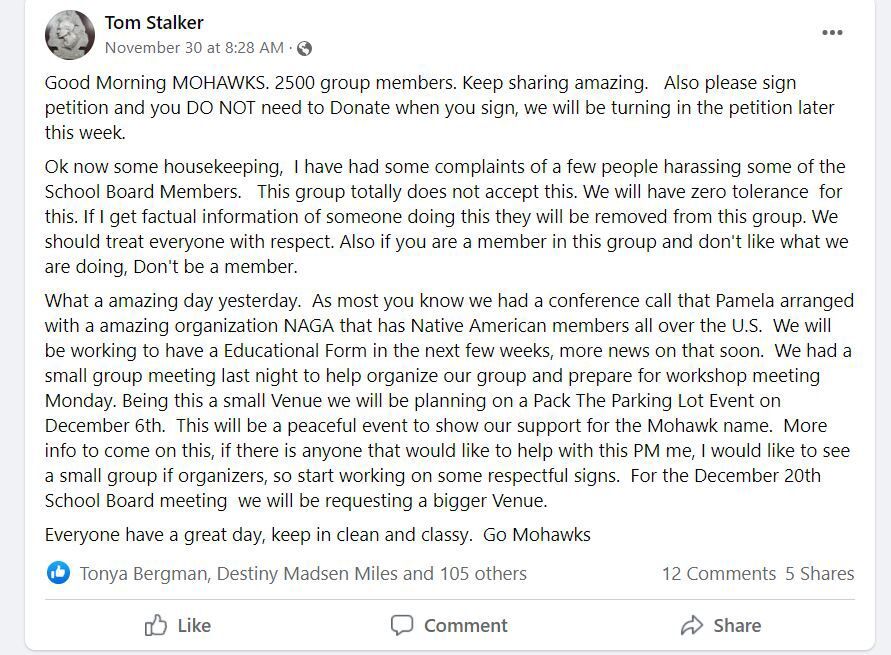 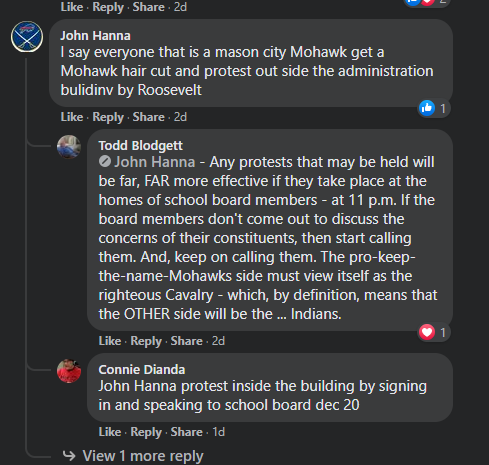