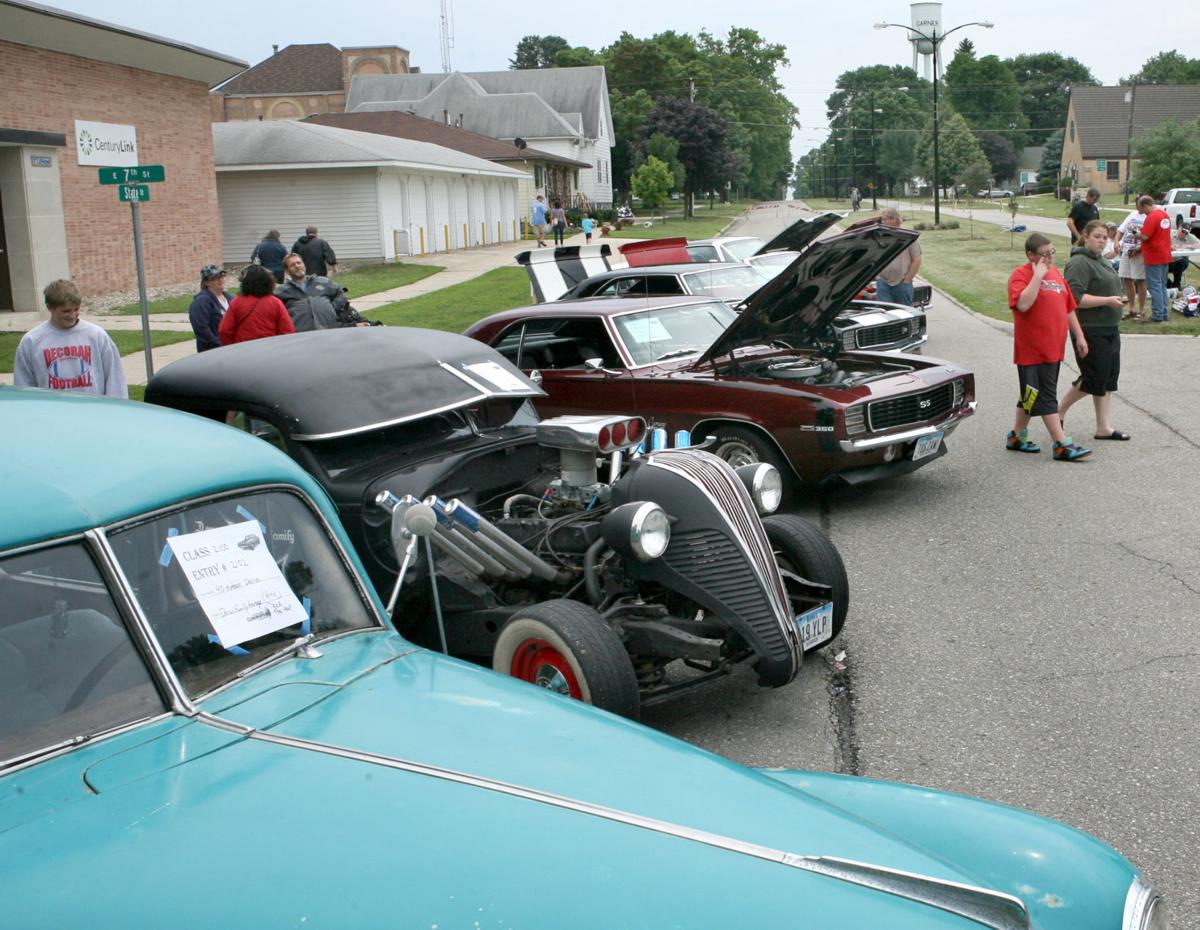 The annual Duesey Days car show in Garner brings cars of all shapes, sizes and colors. 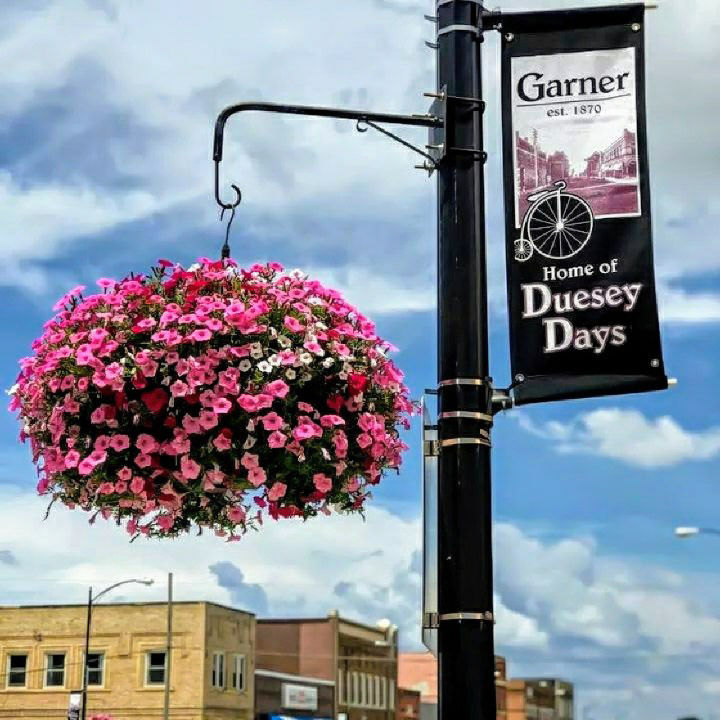 A family-friendly weekend filled with food, fun and entertainment is returning for Garner’s largest event of the summer.

Duesey Days, organized by the Garner Chamber of Commerce, will take place Friday and Saturday.

“It’s our alumni weekend,” said Amber Jenniges, Garner Chamber of Commerce executive director. “A lot of people will come back for class reunions and a lot of people have their family reunions ... It’s just a fun weekend.”

Duesey Days — in its 39th year — celebrates the legacy of one of America’s premier cars, the Duesenberg, designed by former Garner resident August Duesenberg, and his brother, Frederick.

In the late 1890s, the brothers operated bicycle-and-motorcycle shops in Garner and Rockford, respectively. They moved to Des Moines in the early 1900s and started Duesenberg Motor Co. in 1913.

Jenniges said the celebration attracts 5,000 to downtown Garner for the weekend, and she anticipates the event will be even bigger next year when the city celebrates its sesquicentennial.

“It doesn’t matter if you’re from Garner or not, come and enjoy the festivities and the food,” she said.

For those looking to make the most of Duesey Days, here are 10 things you won’t want to miss:

The “Sprucing Up Garner” parade will begin at 10 a.m. downtown and feature dozens of organizations, businesses and community members. It’ll start at Concord Care Center and end at Clear Lake Bank & Trust Company.

The two-day festival features local and regional entertainment for all ages.

Headliner Rhino, a five-member, high-energy Twin Cities band playing an array of modern, alternative, ’80s and classic rock with twists of country, will perform 8 p.m.-midnight Saturday. Doors open at 7 p.m. Tickets for the concert, sponsored by Pritchard Auto, cost $12 in advance or $15 at the door. Attendees must be 21 or older.

Six- and 7-year-olds living in Garner or attending Garner-Hayfield-Ventura School will compete in the Little Miss Duesey Days contest at 6 p.m. Friday in Central Park.

The contest, sponsored by the Wa-Tan-Ye Club of Garner in conjunction with the chamber, is limited to 15 contestants.

Two-person teams will compete in a double-elimination cornhole tournament from 5:30-8 p.m. Friday on the south side of Central Park. Registration begins at 5 p.m. It costs $10 per team. Cash prizes will be awarded to the top three teams.

Community Feud will return to the stage in Central Park from 2-3:30 p.m. Saturday with 10 five-person teams, including businesses and alumni classes, going head-to-head for bragging rights.

The Garner Duesey Days Show & Shine Car Show, which is held rain or shine, will take place from noon-3:30 p.m. Saturday on State Street. Registration is from 9 a.m.-noon. Awards will be given for Mayor’s Choice, Best Paint, Best Engine, Overall Showstopper and Chamber’s Choice. Admission is free.

There’s no shortage of activities for children during Duesey Days.

Inflatables will be available on the south side of Central Park from 5-8 p.m. Friday and 11:30 a.m.-4 p.m. Saturday. A balloon artists, face painting and archery will also be downtown Saturday.

An activity night for fifth- through eighth-grade students will be held from 8-10 p.m. Friday at the Veterans Memorial Recreation Center with free pizza, snacks and games.

Levey the Great, a hypnotist whose been providing family entertainment in North Iowa for more than 15 years, will take the stage at 7 p.m. Friday. His free family-friendly show is loaded with “fascinating illusions, unbelievable acts of hypnosis, comedic routines and audience participation.”

Runners and walkers are welcome to participate in the Duesey Days 2-mile and 10K events, organized by the Garner Parks and Recreation department, at 7:45 a.m. Saturday at Central Park. Registration is from 6:30-7:30 a.m.

Proceeds from the events will go toward equipment purchases, facility improvements and youth programs.

For more information about Duesey Days, including its full schedule, visit www.garneriachamber.com or the Duesey Days, Garner, Iowa Facebook page.

The party’s theme is “Family Game Night,” and will feature food and beverage vendors, activities for kids, and live music from area rock cover group Hwy 9.

Central Park is located on the 300 block of Main Street in Charles City. Visitors are encouraged to bring a lawn chair or blanket for sitting. Admission is free.

All vendors accept cash, but some accept cards, WIC, and senior FMNP, as well.

The 2019 season runs every Saturday, through Oct. 19. For details, or to register as a vendor, visit www.clearlakefarmersmarket.com.

Ken Kilian is a Wisconsin musician with over 40 years of playing experience. His band is comprised of five saxophones, six to eight brass instruments, a full rhythm section, and a vocalist all blending to deliver its traditional swing sound.

The event kicks off with a performance by Walter Trout at 7 p.m. Thursday at the Surf Ballroom. Music begins Friday at 5 p.m. in City Park with performances by Ross William Perry, Heather Newman, and Dee Miller.

Sunday, a road race starts at Tourist Park on South Shore Drive, at 10 a.m. The festival concludes with an awards ceremony at 3 p.m.

The event is free to attend, and the competition is open to all skill levels. Maps and registration information are available at www.bicyclebluesbbq.com.

Kids and adults are invited to participate in hands-on activities and make ice cream by helping to turn the crank on an old-fashioned ice cream freezer.

The museum exhibits thousands of unique, vintage items. From rare, classic vehicles to early agricultural machinery to antique dolls and tools, visitors get an educational view of local pioneer life.

Regular admission is $3 for adults and $1 for children. The ice cream is an additional $2.

Kinney Pioneer Museum is located on Highway 122 West, one mile east of Interstate 35, at the Mason City Municipal Airport entrance.

Tuesday markets feature the Power of Produce Club, a free children's program which provides $2 market vouchers and tastings for participants, through August 20.

All vendors accept cash, but many accept cards and SNAP as well.

The summer season runs every Tuesday and Friday, May 21-Oct. 18, with a rain location in the basement of First Congregational Church.

The public is invited to learn how to be an RC pilot or watch as radio-controlled hobby planes are piloted remotely from the ground.

Free lessons take place every Tuesday night through August, and all necessary equipment is provided.

For more information about the event or club membership, visit www.rivercityrcclub.com.

During the summer months, dusk typically falls near 8:30 p.m., but many viewers come early to find a seat, socialize, and enjoy activities in the park.

The all-volunteer event takes place throughout the summer, with each show sponsored by an area business. Family-friendly movies are projected on the walls of the historic bandshell, near the south entrance points of Mason City's East Park.

Bring a lawn chair, insect repellent, a cooler with snacks and soft drinks, and a plastic bag to take trash out of the park. Admission is free.

The Mason City Municipal Band will perform Thursday, July 11 at 7:30 p.m., on the North Federal Plaza. The band is conducted by Russ Kramer; Bob Fisher is the announcer.

The Hancock County Relay for Life was held Friday, June 21, 6 to 10 p.m., at the Veterans Memorial Recreation Center in Garner.

The West Hancock softball team had its best day of the season on Tuesday, July 2, as the Eagles swept a double-header against Garner-Hayfield-…

Vacancy on WH school board

Two North Iowans have been appointed to one of Iowa’s boards, councils and commissions.

The annual Duesey Days car show in Garner brings cars of all shapes, sizes and colors.