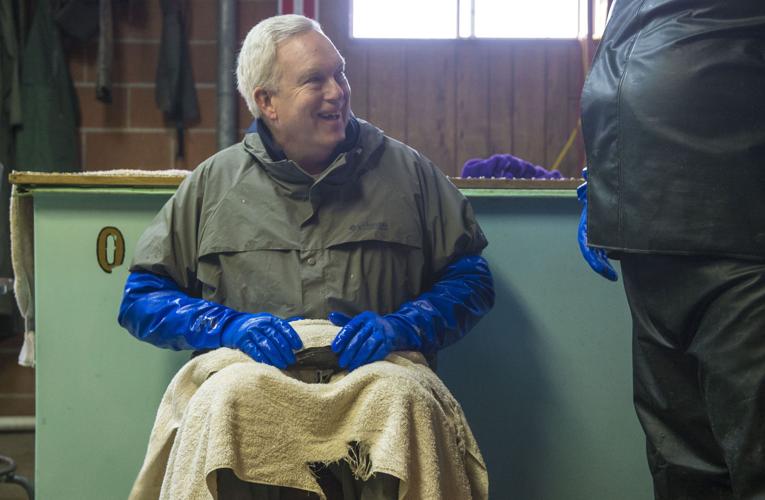 Michael Wentworth smiles as he dries off a pregnant walleye so that Iowa Department of Natural Resources staffers can remove its eggs for spawning efforts to prevent Clear Lake water, which contains zebra mussels that can contaminate the samples, from entering the containers to be shipped to a hatchery. 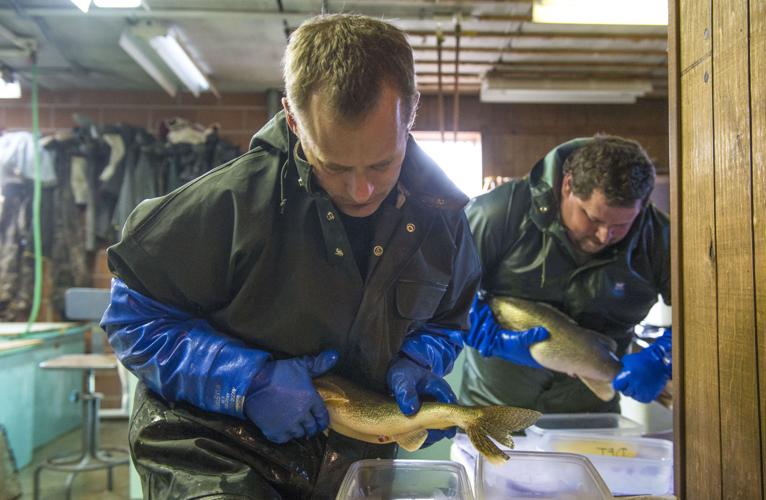 CLEAR LAKE | On the ready with a wet towel, Michael Wentworth went to work walleye after walleye that was dumped in his lap Saturday morning at the former fish hatchery building in Clear Lake.

Flipping the towel over each fish, he methodically and gently blotted and smoothed the cloth over the fish's body to get as much water off each animal before handing it over to Iowa Department of Natural Resources staffers.

The state fisheries biologists were removing eggs from the fish for the annual walleye spawning efforts, and water from Clear Lake — which is contaminated with zebra mussels — can't go with the eggs to the hatchery.

Even as the slippery fish flipped their tails, twisted and did their best to get away, Wentworth loved every minute of it.

"I carry fish, I net fish, I squeegee the floor … Whatever (staff) wants me to do," said Wentworth, who's volunteered for the walleye egg collection for two years. "This is like heaven for me, because I love to fish and I like being around the fish and I get to see them first hand."

He's one of several people, including long-time volunteer Stuart Schultz, of Clear Lake, who helped the Iowa DNR conduct the annual walleye spawn that began this week in Clear Lake.

Walleye were caught at night in gillnets placed on the eastern shore, near the island and around Dodge's Point — all areas with rock and cobble where fish like to spawn.

They were taken to the former fish hatchery building on North Shore Drive, where they were placed in holding tanks for egg-collection, or spawning, in the morning.

Eggs are collected by pressing against the body of a pregnant female.

The tiny yellow eggs — about 30 fit on a fingertip — will stream easily out of a female that is ready to spawn. The crew starts the day by separating fish that are ready from those that aren't.

"If the eggs aren't coming out, we don't force them," said Clear Lake fisheries biologist Scott Grummer. "We want them to naturally be ready to spawn."

On Saturday morning, the crew got about 22 quarts of eggs from the walleye caught Friday night. They'll continue to spawn fish this week.

About 1,750 quarts of eggs are needed to raise enough walleye fry to stock the state's lakes, inland rivers and flood-control reservoirs, Grummer said.

The containers of eggs collected Saturday morning were put in foam coolers and trucked to one of the state's two walleye hatcheries, which are in Spirit Lake and Lake Rathbun.

They'll be fertilized at the hatcheries. Approximately 75-80 percent of the eggs will hatch.

Although Clear Lake has healthy walleye populations, stocking is necessary because the fish — along with the muskellunge, an even bigger game fish popular in Clear Lake — don't have much success naturally reproducing in Iowa.

Some 16 million baby walleye, called fry, from this week's egg-collection effort will be released back into Clear Lake in about a month.

"Us being a brood-fish lake, we get what I would consider a generous stocking, because we're keeping populations high not only for the eggs we need for the hatchery, but also for the angling," Grummer said.

In addition to collecting eggs from the walleye, Grummer and the staff and volunteers also collected data from the adult fish.

They measured and scanned each walleye, as well as muskellunge, or muskie, that were caught in the gillnets, for microchips.

The crew didn't collect eggs from the muskies, which are stocked from eggs collected in Spirit Lake.

Young muskie are tagged with a microchip when released into Clear Lake, which means the adult fish caught in gillnets alongside the walleye this week present an opportunity to collect data about the growth rate and population in Clear Lake.

Wentworth and fellow volunteer Scott Knouf took turns holding down the powerful game fish against a measuring board as they twisted and thrashed in the net.

Grummer used a scanner to read each fish's microchip, which was implanted in their check area or their dorsal fin muscle. Fish that didn't have a chip, or had lost it over the years, got a new one.

Several fish were more than 40 inches long, and the bigger ones were strong enough to give the volunteers and Grummer a challenge.

Even though it's a wet, sometimes stinky task, the volunteers say they enjoyed every minute of it.

"I love this job," said Schultz, of Clear Lake. "There's nothing else like it."

The Iowa Department of Natural Resources’ spring fish spawning season is over and Iowa’s two walleye hatcheries are filled to capacity. Nettin…

North Iowa anglers have landed some big fish over the years, reeling in massive walleyes, northern pike, catfish and muskies. This gallery con…

Michael Wentworth smiles as he dries off a pregnant walleye so that Iowa Department of Natural Resources staffers can remove its eggs for spawning efforts to prevent Clear Lake water, which contains zebra mussels that can contaminate the samples, from entering the containers to be shipped to a hatchery.