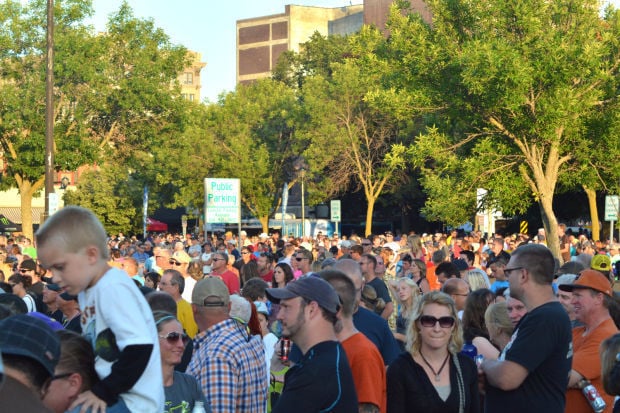 A large crowd was on hand on July 23, 2014 to hear the RAGBRAI entertainment in downtown Mason City. 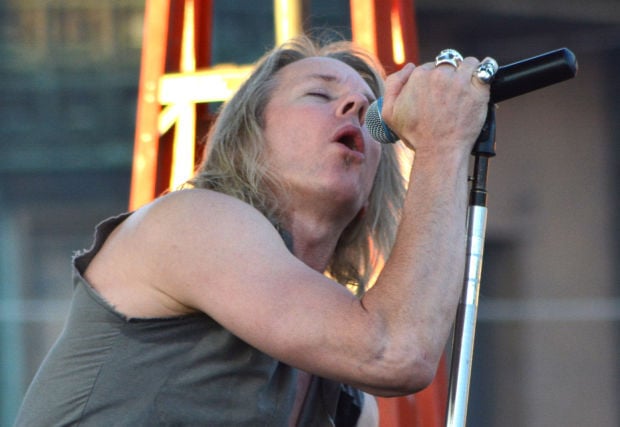 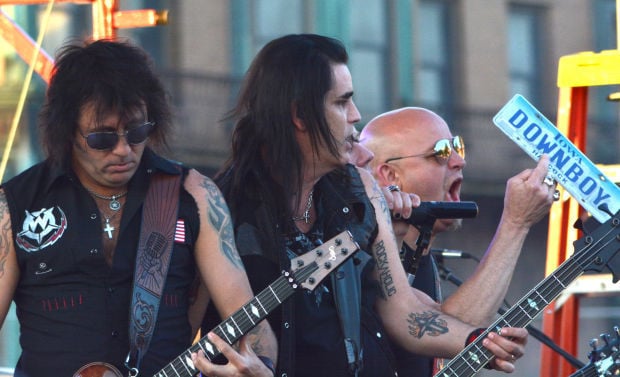 Warrant was the opening act for downtown entertainment during the overnight stop last year by the Register's Annual Great Bicycle Race Across Iowa.

MASON CITY | Riders in the Register's Annual Great Bicycle Ride Across Iowa (RAGBRAI) squeezed in with North Iowans Wednesday night as they waited for concerts by Warrant and Bret Michaels to begin.

Warrant, a well-known American rock band, was the warm-up act for Michaels, frontman for the rock band Poison, a solo artist and reality TV star.

"This is the first concert we've been out for," said Sam Baker of Monmouth, Illinois, as he and his wife, Joy, waited for the music to start.

The Bakers were participating in their first RAGBRAI and they were liking it.

"All the towns we've been through have been awesome," said Sam.

But Mason City seemed to have the most organized event so far, he said.

Joy Baker said they were surprised not to have to wait in line for the transit buses, which operated continuously.

"I really think that made a difference to encourage people to go uptown more," said Sam.

And when more porta-potties were needed for campers at Mason City High School, where the couple were staying, the school extended the hours for the bathrooms to all night.

"The high school principal came out and personally talked to everyone and asked if there was anything he could do," Sam Baker said.

Scanner traffic reported a bicycle rider had suffered a head injury in a fall on County Road B-20 at about 4:30 p.m.

Brittany Kingery, 19, of Mason City, was there to see Bret Michaels, as evidenced by the black Michaels T-shirt she wore.

"I saw him when he was at the Surf Ballroom," she said. "He was awesome."

Kohl Peterson, 27, Kurt Elliott, 28, Jared McDaniel, 34, and Ron Sarrazin, 28, all of Beloit, Wisconsin, were looking forward to all the performers.

"This is definitely the biggest show we're going to see on the ride," McDaniel said. "We couldn't miss it."

The group, part of Team All-Mash, was on their its RAGBRAI.

"It's pretty cool," Sarrazin said. "There's a lot of people."

Kyle Hansen and his son, Reese, 16, of Templeton, Iowa, joked that they were some of the rare people on the bicycle ride that came from Iowa.

A volunteer firefighter, Kyle and his son were staying at the Mason City Fire Station, where they had met a team of New York City firefighters.

"Everybody can't wait to come back next year," said Kyle.

James Flannery of Owen Sound, Ontario, Canada, was on his third RAGBRAI.

"I'm coming back" he said, with a wide smile.

He and his team were camping at the Mason City Aquatic Center, where they had gone swimming earlier in the day.

"It's a different experience," Flannery said. "The people are terrific. The weather's great. It's a party."

And speaking of parties, the crowd welcomed Mason City radio personality Jared Allen and Jodee O'Brien, executive director of Main Street Mason City, who appeared on a big downtown stage to welcome everyone to the evening event.

Miss Iowa, Aly Olson, received a huge ovation for her flawless rendition of "The Star-Spangled Banner."

And then Warrant appeared on stage and the rockin' and rollin' officially began.

MASON CITY | The population of Mason City doubled on July 23, 2014, when thousands of bike riders arrived in Mason City to eat, shop, shower, …

A large crowd was on hand on July 23, 2014 to hear the RAGBRAI entertainment in downtown Mason City.

Warrant was the opening act for downtown entertainment during the overnight stop last year by the Register's Annual Great Bicycle Race Across Iowa.