ELDORA | A woman who attended Dean Hilpipre’s sentencing Friday was jailed for targeting the judge with profanity-laced outbursts during the hearing.

Morgan attend the sentencing for Hilpipre, 61, who was accused of sexually assaulting his then-6-year-old granddaughter. A plea deal amended two counts of second-degree sexual abuse to a lesser charge, lascivious acts with a child.

Following three victim impact statements, McGlynn described how it was not within his power to throw away the deal -- a guilty plea to a lesser charge in exchange for probation and a suspended prison sentence.

As he was speaking, Morgan began loudly criticizing him and was quickly escorted out of the courtroom.

"You’re a f---ing, sick a-- judge,” she told McGlynn, who replied she would be held in contempt of court. As she was led out by a Hardin County deputy, she added, "Go ahead, throw me in jail."

She was booked into the Hardin County Jail Friday. Contempt of court carries a seven-day jail sentence. 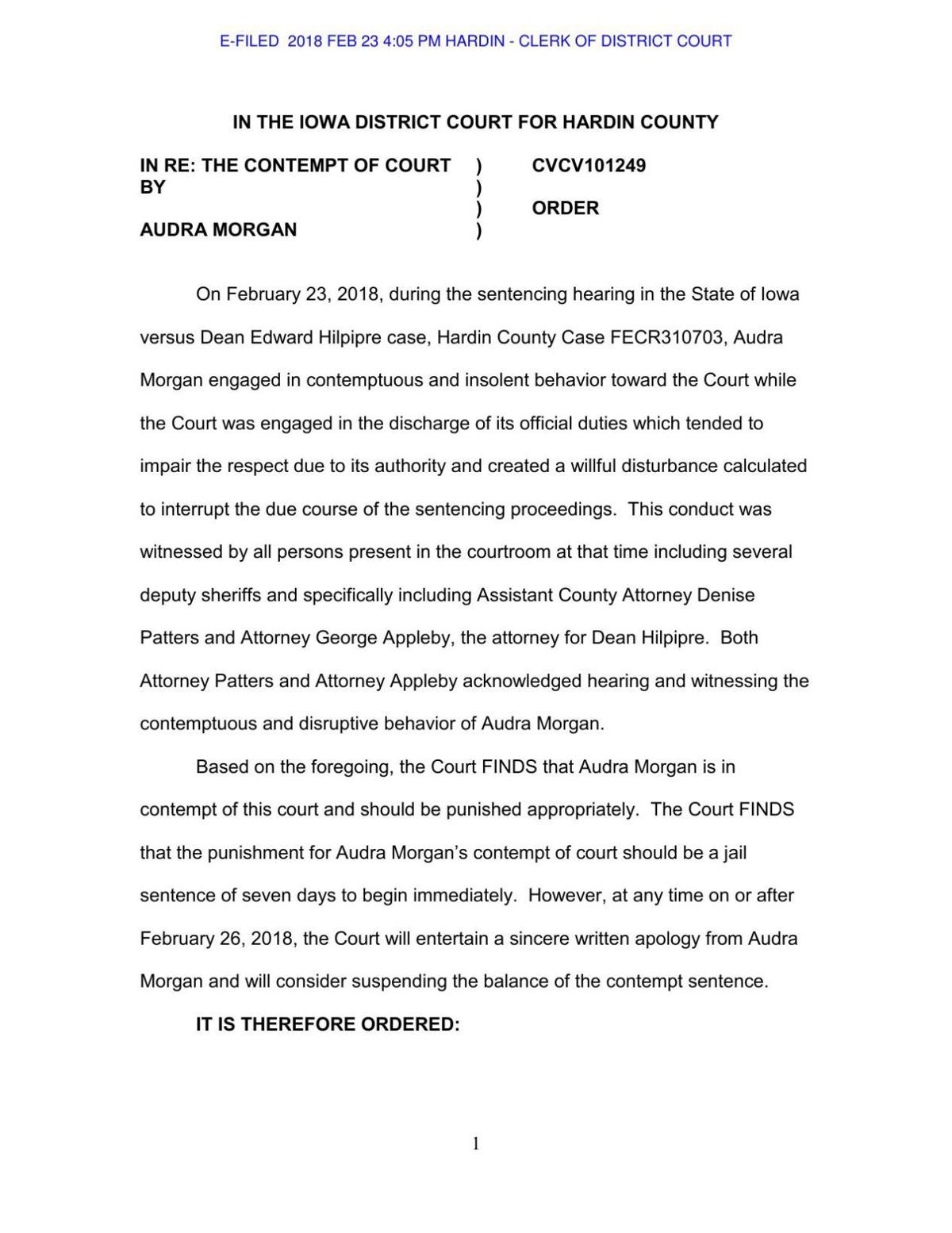 Court documents noted she "engaged in contemptuous and insolent behavior" during the hearing, creating a "willful disturbance calculated to interrupt the due course of the sentencing proceedings."

“However, at any time on or after February 26, 2018, the Court will entertain a sincere written apology from Audra Morgan and will consider suspending the balance of the contempt sentence,” court documents said.

A letter from Morgan, dated Feb. 25, was filed with the court Monday. In the letter, Morgan apologizes for her behavior.

“I want to apologize to each and everyone present that had to endure my language and disrespectful outbursts,” Morgan wrote. “I’ve worked so hard these last five years to change the person I was and have done pretty well until the sentencing hearing.”

Morgan noted she let her emotions and pain get the best of her. 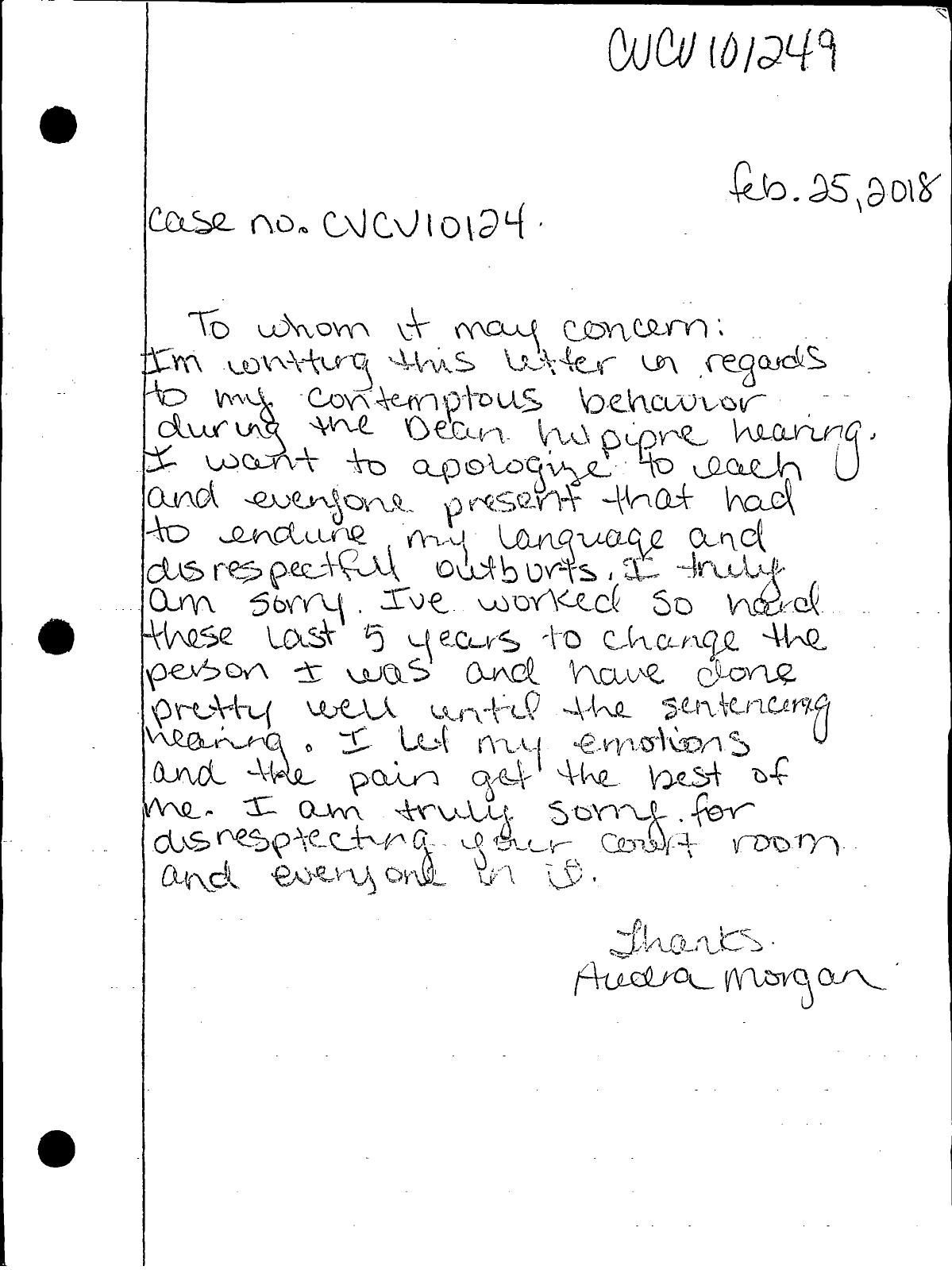 On Monday, McGlynn accepted her apology, suspended the rest of her contempt sentence and ordered her to pay $200 for room and board costs at the jail.

Morgan has served more time in jail than the man whose sentencing she protested.

Hilpipre was sentenced to five years of probation. A 10-year prison sentence was suspended, meaning he could be sent to prison if he violates terms of probation.

When Hilpipre was initially charged, a warrant for his arrest was issued and served Aug. 16, 2017. He was booked into the Hardin County Jail and posted a $25,000 bond on Aug. 17, after spending one day in jail.

Hilpipre's case gained international attention in January when Hilpipre claimed a $100,000 lottery prize. Lottery officials said a criminal conviction does not disqualify someone from winning a prize. 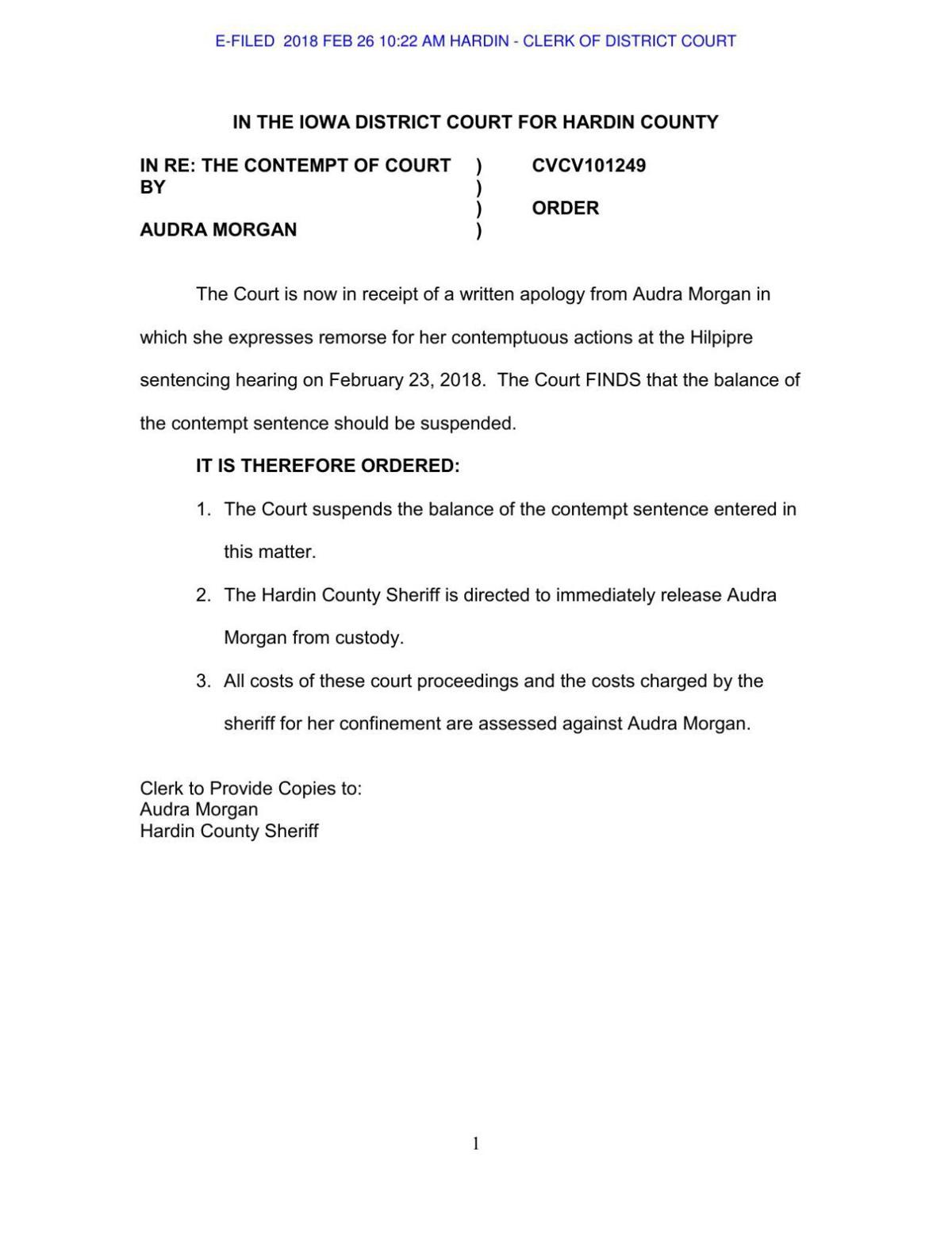 Younkers' parent company closing 42 stores: Find out which Iowa stores are turning out the lights

ELDORA | A judge left in place Monday a court-ordered hold on $100,000 in state lottery winnings for an Iowa man due to a civil lawsuit relate…

A North Iowa court found in favor of a girl and her mother in a civil lawsuit filed against the girl’s grandfather who sexually assaulted her.