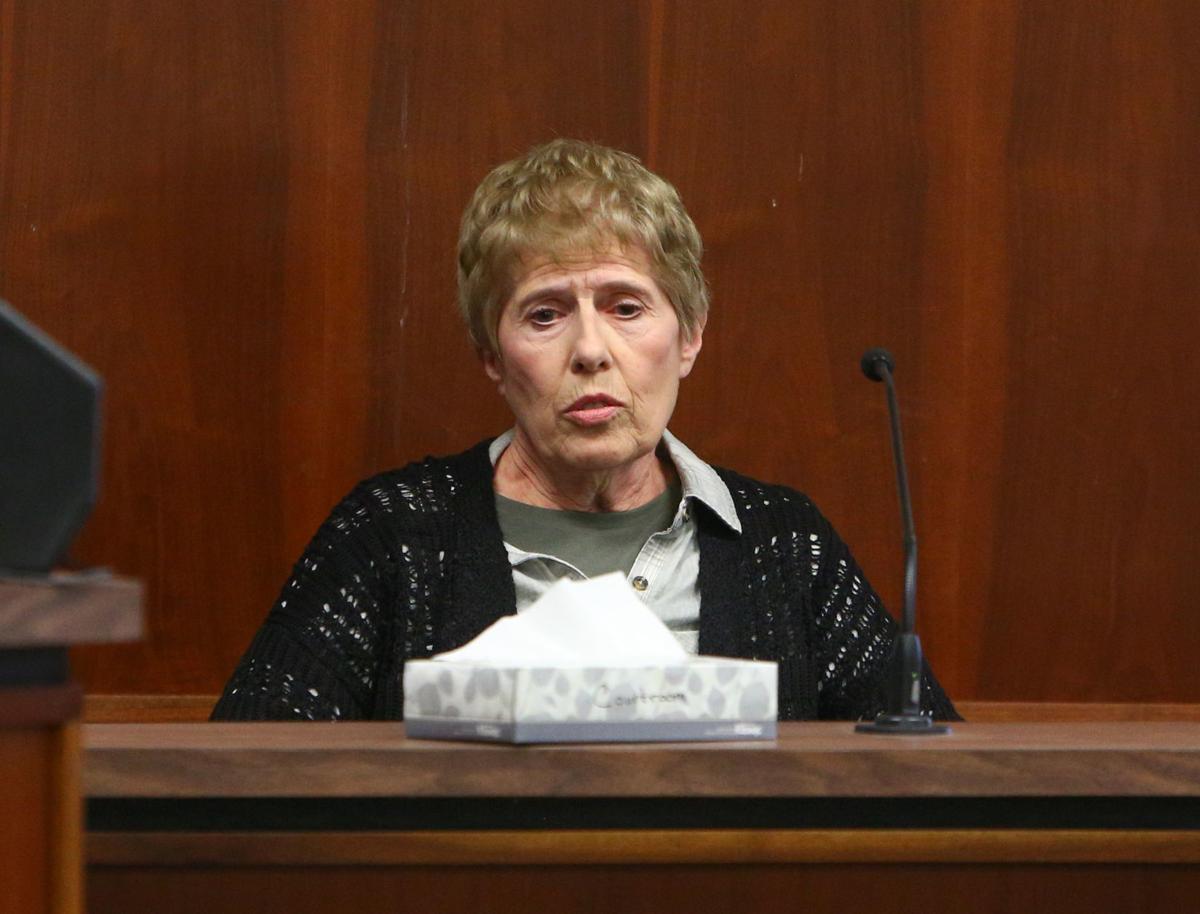 Barbara Kavars, of Manly, testifies at her sentencing hearing at the Worth County Courthouse on Tuesday, Oct. 29. 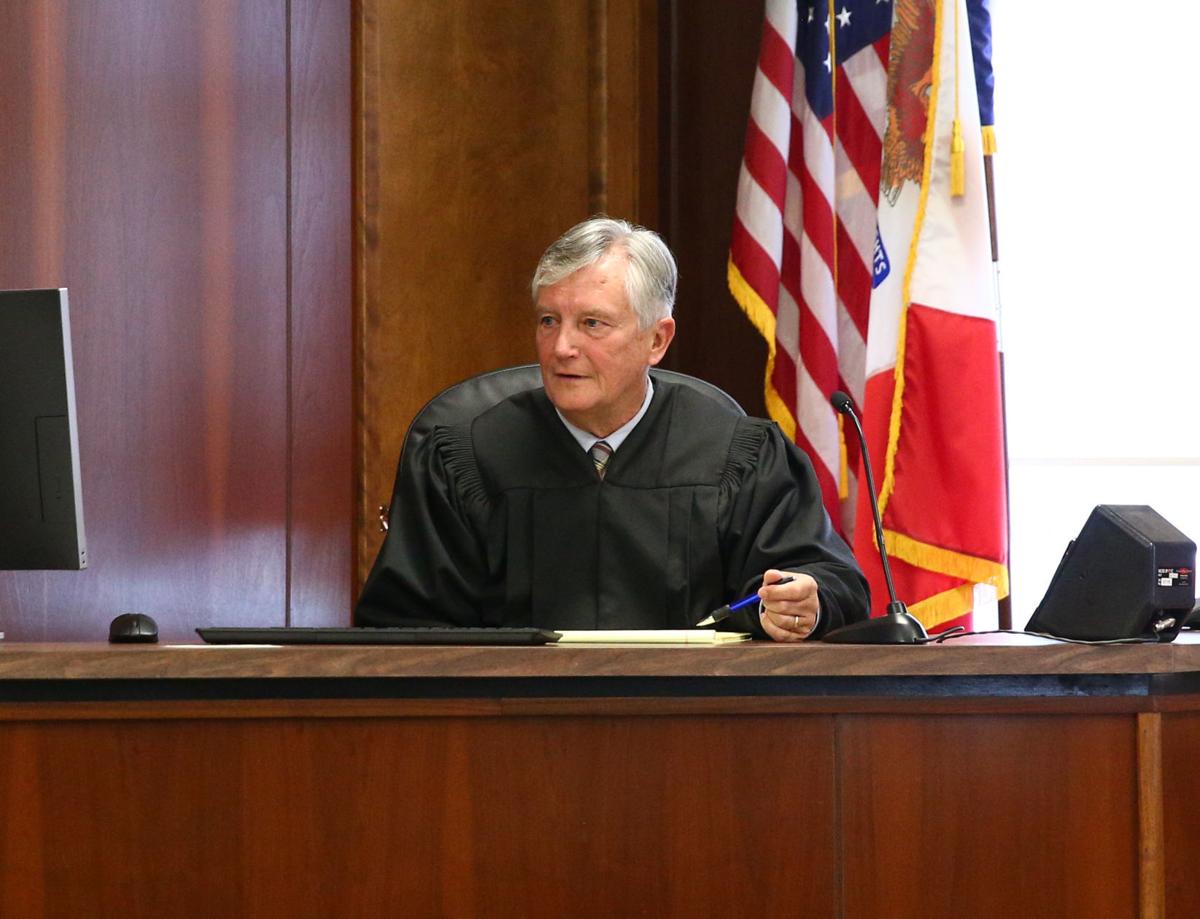 Worth County District Court Judge Lawrence Jahn hands down his sentence to Barbara Kavars, of Manly, on Tuesday, Oct. 29. Kavars was found guilty on Oct. 18 of 14 counts of animal neglect.

A Manly woman who was found guilty of 14 counts of animal neglect will not spend any time in jail, unless she breaks the terms of her sentence handed down in Worth County District Court on Tuesday.

Barbara Kavars was sentenced to two years of supervised probation with 420 days in jail, 30 days for each of the 14 counts, suspended.

Kavars is prohibited from owning and breeding any dogs and can only own one cat during her probation.

She must also undergo a mental health exam with possible treatment dependent on the exam results and pay a $65 fine on each count, for a total of $910.

During her testimony in the hearing, Kavars said she had tried to get the Humane Society of North Iowa to take more of her dogs, but they kept saying they didn’t have the room for more dogs every time she called.

District Court Judge Lawrence Jahn said despite her testimony, the situation was getting worse and worse he didn’t see that Kavars did a whole lot to alleviate the situation.

“You didn’t spay or neuter these animals or separate them so they wouldn’t become pregnant. I suppose you tried to hire help, but I don’t know what your financial circumstances were. So you can’t blame the Humane Society for not taking your animals,” Jahn said. “That’s not their responsibility. It’s your responsibility to keep these animals under control and more importantly to provide adequate care for them.”

Humane Society of North Iowa Executive Director Sybil Soukup said she was happy with the sentence Kavars received so the whole situation, which needed the Humane Society, the American Society for the Prevention of Cruelty to Animals (ASPCA) and the Worth County Sheriff’s Department to help fix, would not repeat itself.

“This mess was created by one person. It took a village to clean it up,” Soukup said. “And that’s what’s really powerful to me, is the number of people that stepped in, that care for the welfare of these animals.”

Soukup said the Humane Society will continue to work with Kavars to take any dogs she has in her care currently and find them new homes.

“We were always willing to take dogs from her,” she said. “…There were a few occasions she may have called and we couldn’t take dogs that exact day because our kennels were full, but we always were able to take some from her at every point throughout this process.”

Kavars was found guilty on on Oct. 18 of 14 counts of misdemeanor animal neglect in connection with the operation of a Samoyed puppy mill near Manly.

Around 150 dogs, most of which were surrendered voluntarily by Kavars, were taken from the farm by representatives from animal welfare organizations on Nov. 12, 2018.

During the trial jurors were shown photos of filthy living conditions in the kennels, as well as pictures of 14 of the dogs seized from the premises.

All the dogs were thin or emaciated from lack of food, and a few were dehydrated, according Elizabeth Pearlman, a forensic veterinarian with the American Society for the Prevention of Cruelty to Animals, or ASPCA, who testified on behalf of the state.

Some of the dogs' fur was matted and they had skin inflammations underneath, she said.

Some of the dogs were obviously in pain, and one had to be euthanized, according to Pearlman.

Kyle Held, director of investigations with the ASPCA, testified that conditions at the breeding facilities were "not adequate at all."

He described one of the pens the dogs were kept in as "incredibly unsanitary and dirty."

Feces was piled up one to two inches deep on the floors of some of the pens, while the lower walls were smeared with what appeared to be a combination of feces, mud and urine from the dog rubbing against them, according to Held.

All the food bowls were empty, and all the water bowls and buckets had ice in them, he said.

Kavars testified that she fed and gave water to the dogs every day.

She also said she surrendered as many of her dogs as space allowed at the Humane Society of North Iowa to make her operation – which she was running alone after the death of her husband in 2017 – more manageable.

However, she admitted that even after giving up some of her dogs, she had adult male and female Samoyeds who had not been spayed or neutered.

She said running the operation by herself was hard work, especially in the winter when the water would freeze in their bowls as it did on the cold November day a Worth County deputy and a team from the American Society for the Prevention of Cruelty to Animals arrived early in the morning.

However, when questioned by her attorney, Michael Byrne, she said although in her opinion the situation at her breeding farm wasn't ideal, it was acceptable.

Barbara Kavars, of Manly, testifies at her sentencing hearing at the Worth County Courthouse on Tuesday, Oct. 29.

Worth County District Court Judge Lawrence Jahn hands down his sentence to Barbara Kavars, of Manly, on Tuesday, Oct. 29. Kavars was found guilty on Oct. 18 of 14 counts of animal neglect.