The Runaway Country Music Festival has filed a civil lawsuit against Dave DeWaard; his son, Gary DeWaard; both of Forest City, and their company, Basis Entertainment, which does business in Florida under the name Beachtown, LLC.

Both men have filed responses in court to the lawsuit, denying the allegations. The lawsuit is a civil suit, meaning no criminal charges have been filed.

A business number for the DeWaards listed online was not in service Friday, and home phone numbers were not publicly available.

The DeWaards founded the Tree Town Music Festival in Forest City in 2014. In January, Gary DeWaard said Basis Entertainment would no longer be managing that festival.

For more than a year, Basis Entertainment had been working with officials from Runaway Country, which has held a music festival in Kissimmee, Florida, for the past eight years.

The original intent was to have Basis Entertainment purchase the festival in Florida, Runaway Country Executive Producer Gary McCann said in a statement.

"We were confident in their ability as they ran Tree Town Festival in Iowa, several stadium shows and they recently purchased an entertainment venue," McCann said of the Dewaards.

The purchase deal fell through when DeWaards missed several deadlines, according to McCann.

"However, part of planning for the transition had already included transferring the online credit card merchant account, used for ticket sales to a new name, Beach Town/Runaway," he said. 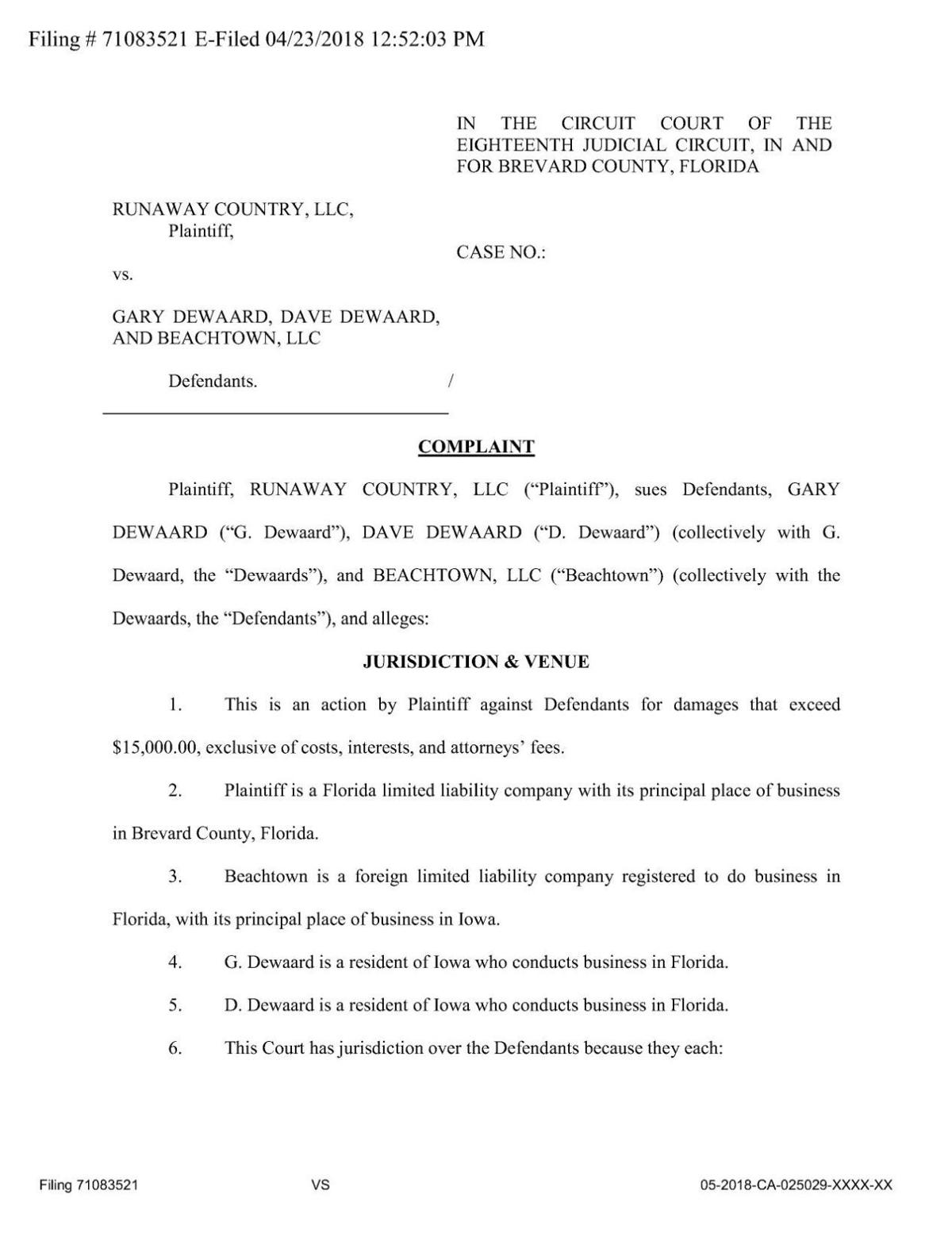 At first the DeWaards turned over a portion of the ticket sales in small increments, but then stopped, wrongfully keeping approximately $275,000 of the revenue from this year's festival, which was held in March, according to McCann.

"While these funds have been promised virtually every day since February, they have yet to return the money," he said.

According to the lawsuit filed in the Eighteenth Judicial Circuit in Brevard County, Florida, in April, Runaway Country entered into a verbal agreement with the DeWaards in early 2018.

This agreement allowed the DeWaards to keep a small percentage of the ticket revenue, but called for them to return the rest "within a reasonable time," the lawsuit states.

The DeWaards and Runaway Country agreed the funds should be returned "well within one year," according to the lawsuit.

“These funds are needed to pay suppliers to the festival," McCann said. "We have had eight great years building relationships with some outstanding businesses in the community. It is important for these companies to be paid for their products and services."

Some of the missing funds were supposed to go to local charities, according to McCann.

A trial date hasn't been set.

FOREST CITY | A Tennessee company is seeking more than $1.7 million in damages in a fraud and civil conspiracy lawsuit against the co-founders…

FOREST CITY | A Tennessee company is seeking more than $1.7 million in damages in a fraud and civil conspiracy lawsuit against the co-founders…