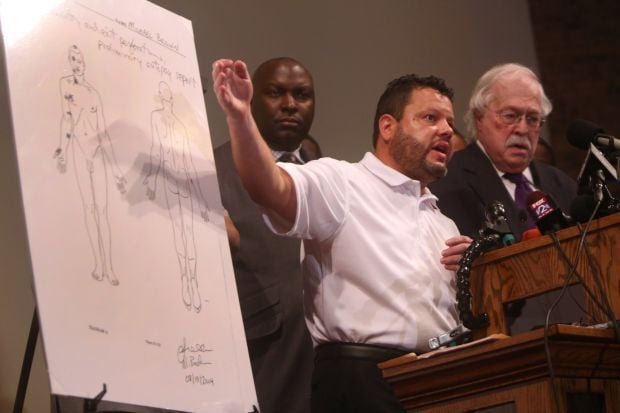 Shawn Parcells discusses the results of the independent autopsy of Michael Brown during a 2014 press conference at Greater St. Mark's Family Church in Ferguson. 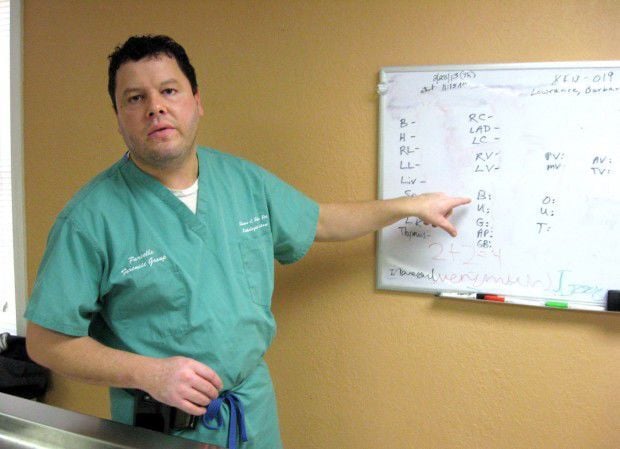 Shawn Parcells describes his organ-logging process at his morgue in Topeka, Kansas, in this undated photo.

The family of a Clear Lake man has joined others across the nation in suing a Kansas-based autopsy company under federal scrutiny for taking money and body parts of the deceased, but never delivering a cause of death.

The 24-page lawsuit filed in Cerro Gordo County in mid-December alleges that National Autopsy Service of Topeka, Kansas, and its owner Shawn Parcells mishandled the remains of 68-year-old Mario Ochoa Sr. after the family said they paid over $3,000 for an autopsy and never received a completed report.

The Ochoa family says it reached out to National Autopsy Service on Dec. 21, 2018, after Mario died while under the care of MercyOne North Iowa, according to court documents.

Mario was admitted to MercyOne when he complained of fever, confusion and shortness of breath after an antibiotic treatment for a previous infection did not work. Because he was agitated, Mario was prescribed Haldol, a long-acting antipsychotic, via injection into his body, but instead Ochoa received the injection in his intravenous line, according to court documents. Later that evening, Ochoa began showing signs of stroke and was transferred to the hospital's intensive care unit.

After showing no progress in recovering, Ochoa's family placed him in hospice, where he died just under two weeks later, according to the court documents.

The Ochoa family sought Parcells' services after MercyOne and the state’s medical examiner declined to conduct an autopsy. The family believes Mario Ochoa's death was caused by the Haldol injection via IV instead of directly into his body as prescribed. They are also suing MercyOne North Iowa for medical malpractice.

A representative of MercyOne declined to comment for this story.

Parcells collected tissue samples from Mario's body at a local funeral home, and promised the Ochoas results within 90 days, for which he was paid $3,300. While the family says Parcells maintained communication with them that the autopsy was forthcoming, it never materialized, according to court documents.

The Ochoas are just the latest in a long list of families pursuing legal action against Parcells and National Autopsy Service.

Parcells, who also uses the moniker “Professor Lynn,” was banned by a Kansas court from providing autopsy services within weeks of conducting the exam on Ochoa.

In November, he was indicted on 10 counts of wire fraud by federal prosecutors in Kansas, which also seeks to recover more than $1 million in fees paid to Parcells, according to a St. Louis Post-Dispatch article.

Parcells claims to be a self-taught pathology assistant with no formal education or training, according to the article. From 1996 to 2003, he worked as a pathology assistant for the Jackson County Medical Examiner's Office in Missouri before starting National Autopsy Service.

The federal case claims 375 families paid Parcells, and most never received autopsy reports. The Ochoa family confirmed they are also listed as victims in an ongoing FBI investigation.

A request for comment from Parcells has not yet been answered.

A jury trial has been requested in the Ochoa case. A court date has not yet been set.

Please note that case numbers found in articles with earlier dates may have changed.

MercyOne staff in need of equipment

MercyOne is in need of personal protection for its staff, according to director Gene Ott.

Government bodies in Butler, Cerro Gordo, Floyd, Franklin, Hancock, Kossuth, Mitchell, Winnebago, Worth and Wright are getting up-to-date info to residents while staying in routine contact with state and national groups.

Mitchell County has plan for coronavirus

As of March 27 there are currently 179 cases of COVID-19 in Iowa. There has been one death in Dubque County. Currently there are no cases in M…

CG Public health: What to know about the coronavirus

CG Public Health is advising residents about what they can do now to prepare for the potential spread of the novel coronavirus known as COVID-19.

After nine months, the pandemic has taken its toll on ICU workers

""This was something we weren't prepared for...It surprised all of us, really."

The first round is set to begin the week of Dec. 28 and will be handled by the likes of CVS and Walgreens.

Dr. Jonna Quinn knew when she had her second child earlier this month it’d be her last.

A sexual harassment lawsuit against an area flower shop has been dismissed.

The plan, which was approved by the Cerro Gordo County Board of Supervisors on Monday morning, will make use of the former Sears storefront.

Authorities in Mason City are looking into multiple burglaries that have been committed over the past few months.

Shawn Parcells discusses the results of the independent autopsy of Michael Brown during a 2014 press conference at Greater St. Mark's Family Church in Ferguson.

Shawn Parcells describes his organ-logging process at his morgue in Topeka, Kansas, in this undated photo.