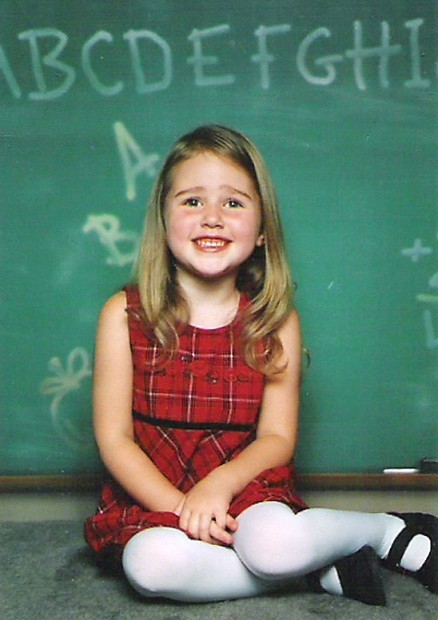 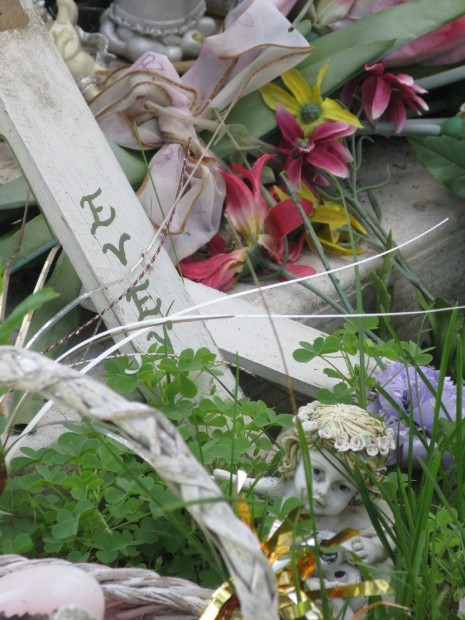 An angel peeks through some clover at the base of a memorial angel that pays tribute to Evelyn Miller in Floyd City Park. At left is a bar from a broken cross that says, "Evey," Evelyn's nickname. 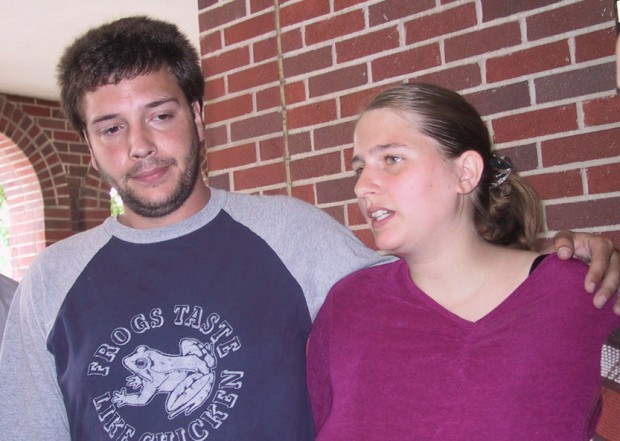 Casey Frederiksen and his then-fiance, Noel Miller, mother of 5-year-old Evelyn Miller, talk with members of the press following a press conference Aug. 5, 2005, in Charles City. 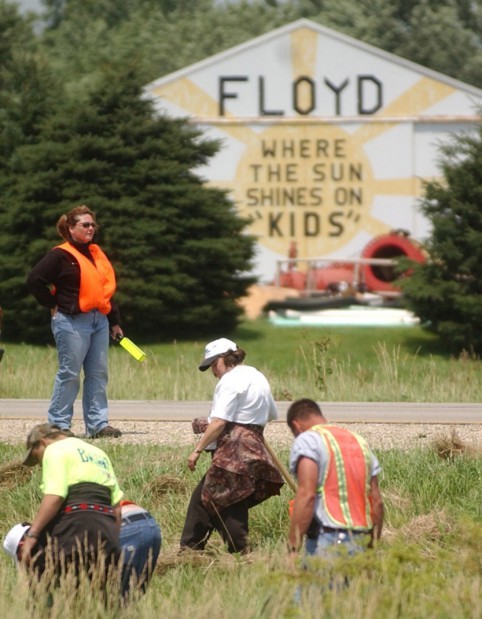 Volunteers search the median of Highway 18 south of Floyd on July 3, 2005, for missing 5-year-old Evelyn Celeste Miller in this file photo.
By DEB NICKLAY,

In a case with many questions, it is at the feet of this angel, perhaps, where some answers are known.

And that is that five years after her death, Evelyn Miller of Floyd continues to be remembered.

Pink tulips, not many days old, splay across the base of this memorial stone, an 8-foot angel created by people who never knew Evelyn.

Along the base small ceramic angels line up, one by one, looking like a celestial defense against the darkness that overtook the small girl who, according to those who knew her, loved butterflies and sunsets.

Just above the base of this stone is inscribed: “Thou shalt not cry any longer; for heaven’s embrace will keep you safe and warm.”

She was 5 years old.

A jump rope, a crocheted butterfly and a small box of candy Dots have been placed near the grave by unknown hands. A stone with the word “Peace” painted on it lies nearby; small bags of colorful, smaller stones are there, too.

Nearby, under a sunny blue sky, kids in green team shirts begin to arrive to play baseball in a field at the Floyd City Park, laughing, shouting, with the expected energy of summer-loving youngsters.

Evelyn vanished from an apartment building south of this park, across the Avenue of the Saints, on July 1, 2005.

A massive search was mounted, ending only when Evelyn was found in the Cedar River, dead, on July 6. The cause of her death has not been disclosed, but it has been ruled a homicide.

Some of the prominent people in the case are no longer in Floyd County.

Miller’s then-fiancé, Casey Frederiksen, at home when Evelyn vanished, has since been sentenced to prison terms for the manufacture of methamphetamine and being in possession of child pornography.

Miller and Frederiksen were the parents of two children together. Both were taken from the couple by authorities.

The apartment building, ground zero of the investigation, has since been torn down.

Out of the spotlight, others work to uncover Evelyn’s killer.

Chris Calloway, who heads the case for the Iowa Division of Criminal Investigation, is careful when talking of the case.

He declined to speak about specifics, or suspects — hesitant with any direct answers. The reason is clear: He wants nothing to compromise the case he hopes one day will be solved.

He would say this when asked: Two Floyd County deputies, along with Calloway, the state attorney general’s office and Sheriff Rick Lynch continue to actively investigate the case.

When asked for an interview, Calloway was chosen to speak for Lynch and Floyd County Attorney Normand Klemesrud.

“No case is a sprint; some are middle distances. This one is more like a marathon,” Calloway said. “Some cases take longer than others. But it is never put on the shelf. We’re all working as diligently as possible ... to bring this to a conclusion.”

Calloway also said the investigative group is in regular contact with family members, who declined to speak to the Globe Gazette about the anniversary.

Evelyn’s father, Andrew Christie, and his wife, Lindsey, were not in the area when Evelyn vanished but were active in the search. They continue to live in Waterloo.

Whether or not they will visit the stone angel that kneels in perpetual prayer in this small Iowa park is unknown. In the past they have kept their observances private.

There is another item at the base of this memorial stone, keeping angels company.

It is a child’s Easter basket, a sign of hope, and a new spring.

Few connected with the case are still around

Her mother, Noel Miller, arrived home from her overnight work shift at a nursing home about 6:20 a.m.

She found her then-fiancé, Casey Frederiksen, and the couple’s two younger children at home — but not her daughter Evelyn, 5.

Frederiksen claimed Evelyn was well when he went to sleep and did not know where she was.

Hundreds of volunteers combed the corn and soybean fields surrounding the apartment building, hoping the girl had wandered away during the night.

Later, two Charles City men — Danny Slick and Randy Patrie — told law enforcement that they had seen Evelyn at about 2 a.m. on the morning of her disappearance.

They said they had visited the apartment and Evelyn had answered the door when they arrived. They said she was fine when they left.

Her body was later found in the Cedar River, about two miles from her home. Cause of death remains undisclosed.

Frederiksen, 31, remains a prominent figure in the case.

He is incarcerated in the federal penitentiary in Marion, Ill. His anticipated release is in 2026.

Noel Miller, 27, reportedly lives in California. In 2007 she was charged with going armed with intent after placing a 911 call to police then being found with a knife concealed under her sleeve.

Slick, 31, was convicted to a year and one day in prison for lying to federal authorities during the Miller investigation. He was released in October 2009.

His whereabouts, and those of Randy Patrie, are unknown.

FLOYD — A press conference has been scheduled at 1:30 p.m. to disclose a significant development in the seven-year investigation into the deat…

There is a small, plastic card stuck behind a piece of electrical conduit that runs the length of wall near Lt. Frank Stearns desk.

Iowa cold case proposal in the running for funds

MASON CITY — In the days and months before she disappeared on June 27, 1995, Jodi Huisentruit’s top priority was her career.

Access to Huisentruit evidence is 'extremely limited’ at MCPD

MASON CITY — State and local police are trying to find out who sent a copy of Jodi Huisentruit’s journal to the Globe Gazette.

MASON CITY — J.J. Murray had a strong connection with KIMT-TV even before he became the station’s news director in October 2006.

An angel peeks through some clover at the base of a memorial angel that pays tribute to Evelyn Miller in Floyd City Park. At left is a bar from a broken cross that says, "Evey," Evelyn's nickname.

Casey Frederiksen and his then-fiance, Noel Miller, mother of 5-year-old Evelyn Miller, talk with members of the press following a press conference Aug. 5, 2005, in Charles City.

Volunteers search the median of Highway 18 south of Floyd on July 3, 2005, for missing 5-year-old Evelyn Celeste Miller in this file photo.
© Copyright 2021 Globe Gazette, 687 S Taft Ave, Suite 2 Mason City,IA | Terms of Use | Privacy Policy | Do Not Sell My Info
Powered by BLOX Content Management System from TownNews.com.
You don't have any notifications.