Iowa’s signature summer humidity is not just an annoyance, it’s a costly reminder that climate change is real and needs to be addressed, a group of Iowa scientists said Wednesday.

Scientists have “good evidence” the rise is due to increased carbon dioxide in the atmosphere that likely will increase in the future, Takle said.

He is one of the architects of the seventh annual Iowa Climate Statement, released with endorsement of endorsement of 190 science faculty, researchers and educators from 39 Iowa colleges and universities.

Takle, a professor of geological and atmospheric sciences in the ISU Department of Agronomy, said the conditions relate to the increase of springtime moisture transported from the Gulf of Mexico that settle along eastern Iowa. That results in higher humidity readings measured across all seasons at all long-term monitoring stations in Iowa.

He said Iowa has been a national leader in embracing renewable energy sources but factors outside the state’s boundaries and control are negatively impacting the state’s climate. 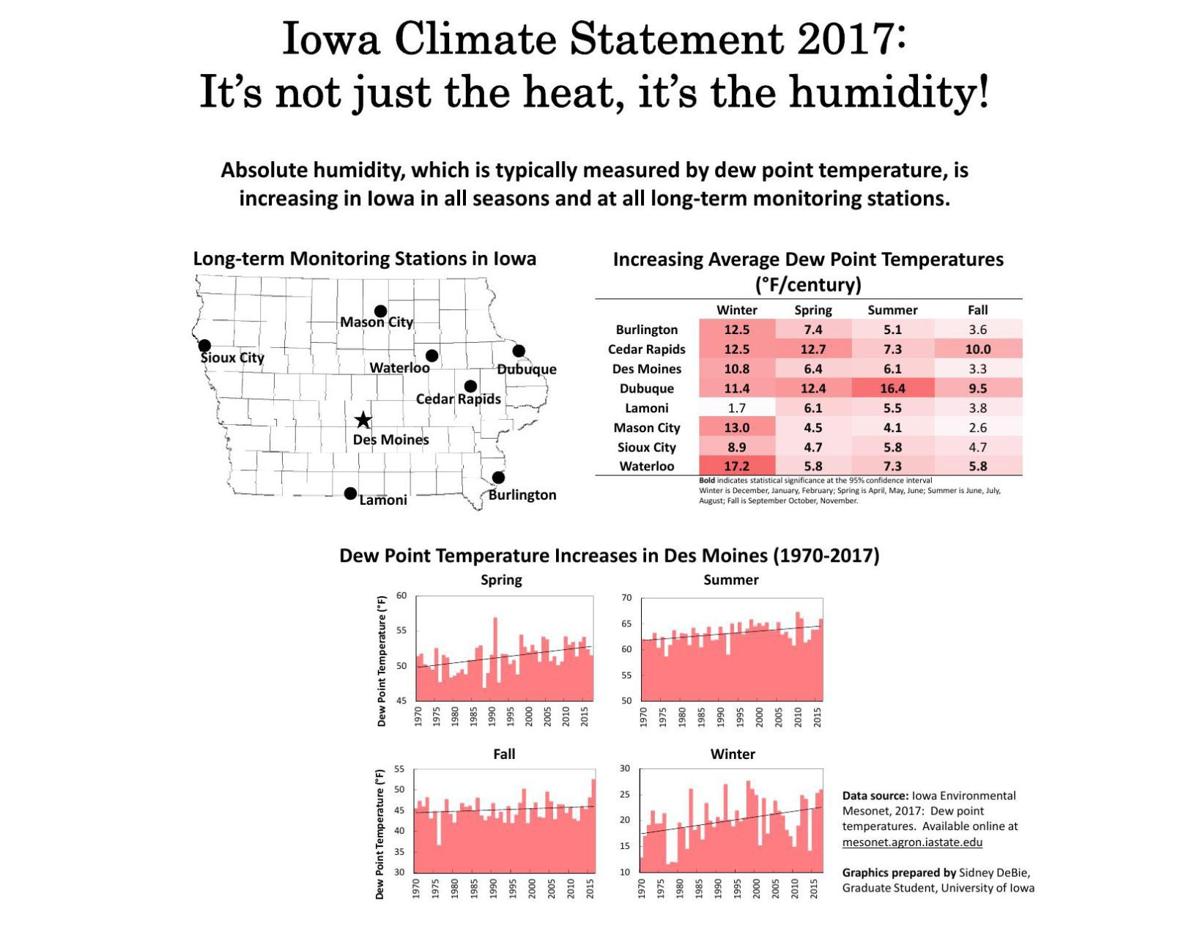 "As long as we avoid making progress on reducing the atmospheric concentration of carbon dioxide, these effects are going to increase," Takle said.

The latest statement issued by the Iowa scientists describes the impact of significantly higher humidity levels on people, animals, crops and infrastructure.

According to the scientists, there is evidence:

• The frequency of intense rain has increased in Iowa over the past 50 years.

• There is a northward expansion of species formerly restricted by a colder climate that could disrupt natural ecosystems and introduce new agricultural pests and diseases.

• Agriculture, human health and economic stability could be affected if greenhouse gas emissions continue to increase.

“We must all do more to mitigate the effects of climate change, by curtailing emissions of heat‐trapping gases, improving energy efficiency, and increasing use of clean and renewable energy,” said Betsy Stone, a University of Iowa chemistry and biochemical engineering associate professor.

Stone pointed to monitoring data dating back to 1971 indicating average humidity increased by 8 percent in Mason City, 23 percent in Dubuque, 14.8 percent in Burlington, 11.9 percent in Des Moines, 10.7 percent in Waterloo and 9.2 percent in Sioux City.