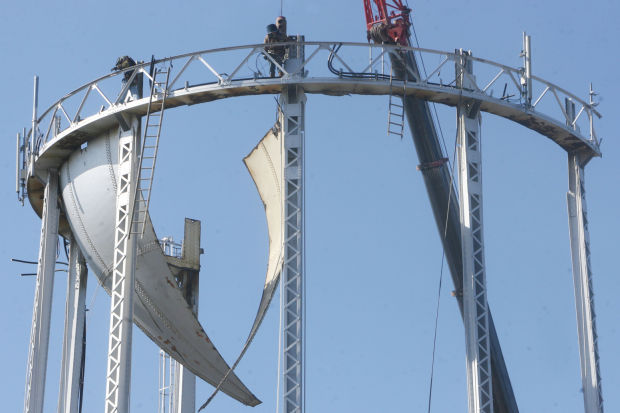 Demolition of the water tower in downtown Clear Lake continued on Thursday.  Nearly the entire bowl had been removed by 10 a.m.  (Arian Schuessler/The Globe Gazette) 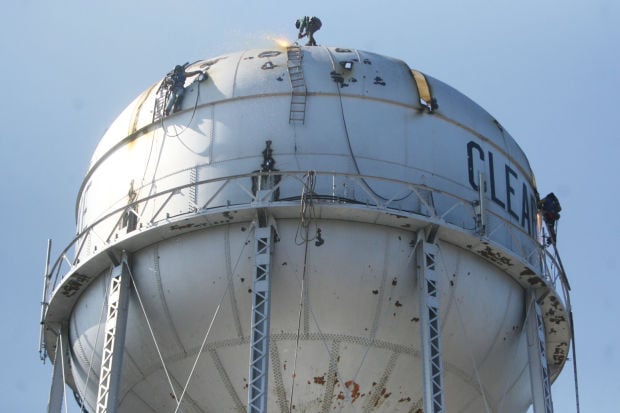 Demolition of the 64- year-old, 500,000-gallon water tower located at the end of Main Avenue near the Clear Lake Yacht Club started Wednesday morning.

“Basically we are dropping the roof inside the tank and then the crane is going to be ready to pick the 3,000 to 6,000-pound pieces to the ground. We’ll cut them up over there. The job will take two days.”

By 10:30 a.m. Thursday the bowl had been removed and work had begun on the vertical supports.  The demolition should be completed by Thursday night.

McKiness Excavating, Mason City, will remove the 10 concrete footings from the site.

The demolition will leave Iseler with around 140 to 150 tons of scrap metal.

“They’re down from  three months ago, but they’re OK,”he said.

According to City Administrator Scott Flory, the pieces of the tower with the words “Clear Lake” are being saved in case the city wishes to memorialize the tower in a future city project.

“It is a very momentous occasion for the community to see the dismantling of the Main Avenue water tower, but not one without precedent. There was once a similar structure in the middle of City Park.  The venerable old tower has stood the test of time at that location since 1949.  In many ways, it became a landmark feature of the lakefront and downtown Clear Lake,” Flory said.

The exterior lead-based paint was peeling.

The city investigated the possibility of sandblasting and re-painting the tower, but that would have meant encasing the whole tower in a plastic wrap to contain the lead, and the process would have taken several months and cost approximately $500,000.

The tower has been drained since April 2012.

Construction of a new one million-gallon water tower on a one-acre parcel at 1814 U.S. Highway 18 W. is expected to begin after this fall.

The new tower should be in operation by the summer of 2014.

Another piece of the Hyatt Place hotel project is coming together.

Boulevard. Right-of-way. Parking strip. Whatever you call that strip of grass in front of your property, there will soon be a requirement by c…

Demolition of the water tower in downtown Clear Lake continued on Thursday.  Nearly the entire bowl had been removed by 10 a.m.  (Arian Schuessler/The Globe Gazette)