The city of Clear Lake is moving forward with a multimillion-dollar reconstruction project on eastern Main Avenue despite significant opposition to the cost Monday evening during a public hearing.

Fourteen residents spoke and 11 letters were submitted to the City Council objecting to the $418,026 in preliminary special assessments for the water, storm sewer, sanitary sewer and pavement improvements on Main Avenue between 14th Street and 20th Street.

“If I get assessed, I want to know how I’m supposed to pay for it,” said Catherine Frampton, a Main Avenue resident. “Do I have to use my retirement money? Because that’s the only way I can.”

Others expressed frustration using words and phrases, like “excessive,” “undue burden” and “unfair,” in speaking about their assessments.

Some, like Roger Barillas and Gary Peterson, asked the city to pick up a larger portion of the project because of its usage as a commercial thoroughfare that links residents and tourists to downtown Clear Lake.

Barillas believes the project is necessary and overdue, but he doesn’t feel the cost of it should be placed solely on the Main Avenue residents.

“This is a very wealthy city,” he said. “North and South Shore Drive have a lot of very wealthy individuals that live in this city or at least build their mansions there for their enjoyment, whereas Main Avenue is composed of hard-working people, average people with low incomes most of the time for what I understand.”

The multi-year project, which began in 2017, features street and utility improvements on Main Avenue between Eighth Street and 24th Street and is estimated to cost at least $6 million when finished, Scott Flory, Clear Lake city administrator, said at a meeting in December.

This phase is estimated to cost nearly $2,045,947 for construction and $246,100 for engineering, legal and administrative fees. 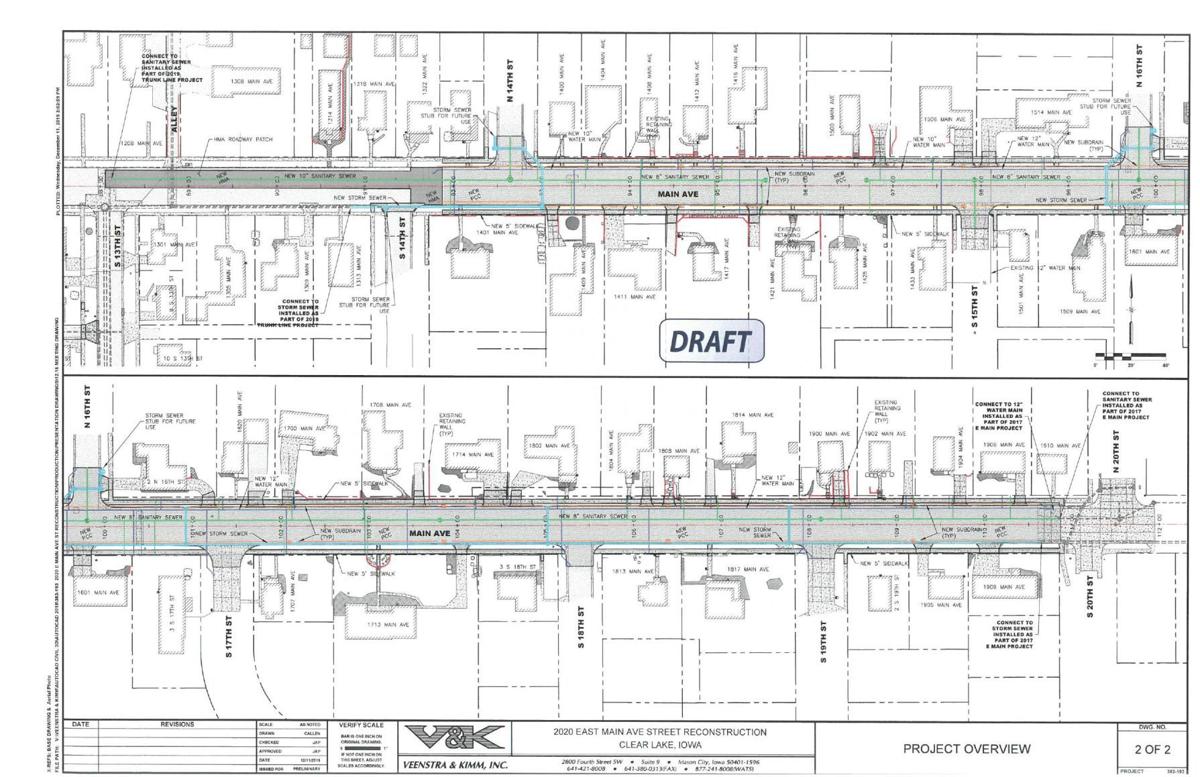 About $418,026, or 18%, of the project is being assessed to the benefiting property owners based on the city’s decades-old formula, and the remaining $1.9 percent, or 82%, will be paid for by the city.

“As far as excessive, this project is being specially assessed the same way we’ve looked at projects in the past,” said Jason Petersburg, project engineer at Veenstra & Kimm, noting the North Shore Drive and the last Main Avenue project has assessments near 18 percent. “It’s consistent with the policy that we’ve followed in the past.”

Petersburg told residents their final assessments may be less than presented, but by law, they can’t be more.

This project will also include new 5-foot-wide sidewalks and bicycle lanes on the north and south side of the road.

The work is a continuation of the improvements done on Main Avenue between South 20th Street and South 24th Street a couple years ago.

More than half of the project’s cost is related to street-related items, according to the draft engineer’s estimate from Veenstra & Kimm.

After the public hearing, which made up most of the nearly two-hour council meeting, council and staff responded to residents’ concerns before the City Council’s unanimous vote to move forward with the project.

Councilman Gary Hugi, who represents the ward where Main Avenue is, empathized with residents.

“The process assessing is the same throughout the whole city and it’s been like that for years,” he said. “To try to change things now would not be fair … We just can’t change the process at this point, now or probably in the future either.

“All of us feel for the assessments, but it is what it is.”

Hugi’s comment was greeted with groans and mumbles from residents in attendance.

Councilman Bennett Smith said it’s the city’s hope that the project, and the special assessments will be less than estimated, but no promises can be made. 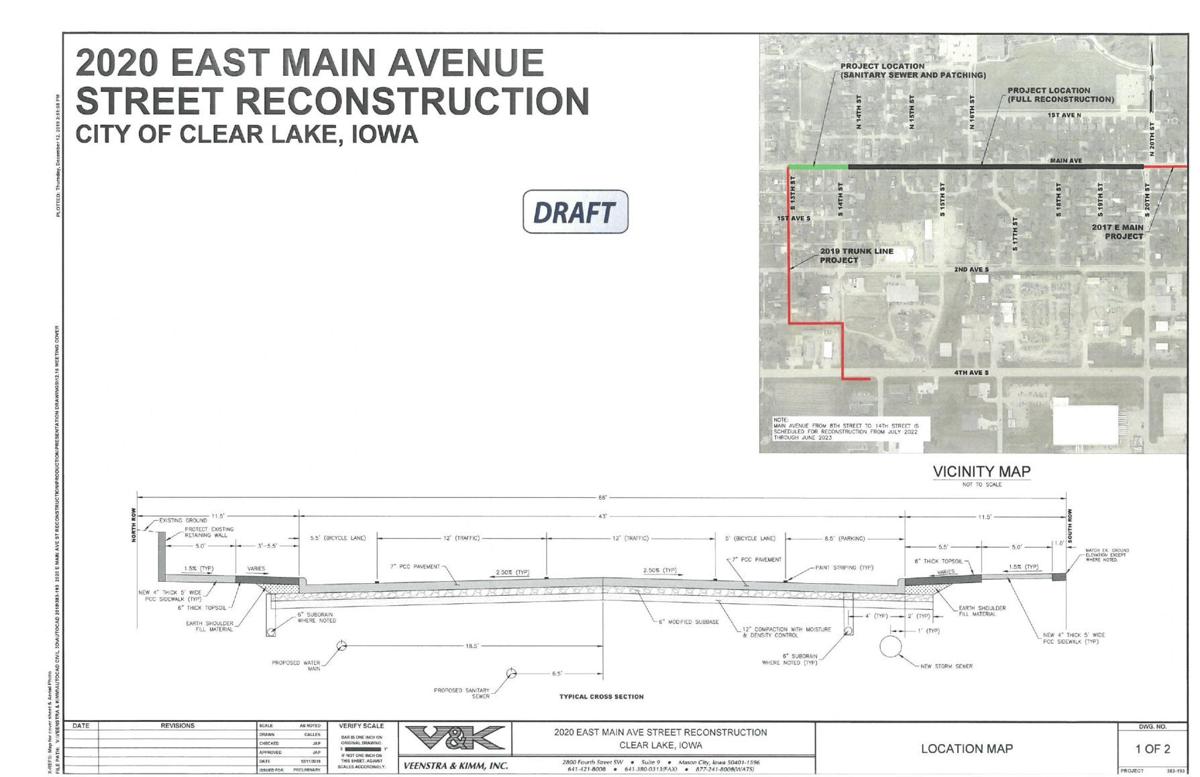 The underground work is scheduled to begin in July 2020 after the Fourth of July, according to a schedule provided by Veenstra & Kimm. It’d be completed in November 2020.

Petersburg said a temporary aggregate surfacing would be used through the winter and paving would begin right away in the spring.

The paving is scheduled to be completed by June 2021.

Petersburg said residents likely won’t see their final assessments until the fall of 2021.

The project’s bid letting will take place Feb. 20, and the council will vote on the bids at its March 2 meeting.

Gov. Kim Reynolds is slated to administer the oath of office to Iowa Court of Appeals Judge Paul Ahlers of Fort Dodge next week.

If all cost estimates for the pertinent projects stay firm, the city moved forward on at least $2.8 million worth of work.

Here is the breakdown of delegates for Democratic candidate for president, by county. Precinct-level results can be found at https://results.t…

Class 1A is North Iowa basketball’s proudest class this week. With Bishop Garrigan going up one spot to No. 5, there are now three area basket…

In today’s basketball world, offense is usually the main focus. With 3-pointers and crooked scoring numbers in vogue, defense can often get le…

DES MOINES — Emily Madsen isn’t a paid lobbyist, but her tearful appeal Wednesday for a law change she believes would have saved the life of her friend resonated with senators who put the transportation bill on a fast track.

Iowa Democrats and anyone else who wants to maintain the state’s first-in-the-nation caucuses needs to “get up, brush yourself off and move forward,” according to a longtime Democrat now in crisis management.

Legislation that would have required the state Board of Regents to conduct a study of emergency preparedness and response at outdoor stadiums at Iowa State University and the University of Iowa has been shelved for the time being.

Legislation seeks to prevent employees from being forced to get microchipped

What do you think of this design?

Both precipitation and temperatures in Iowa were above average during the month of January, according to the Iowa DNR's latest Water Summary Update.

“While I fully acknowledge that the reporting circumstances on Monday night were unacceptable, we owe it to the thousands of Iowa Democratic volunteers and caucusgoers to remain focused on collecting and reviewing incoming results," said Price.