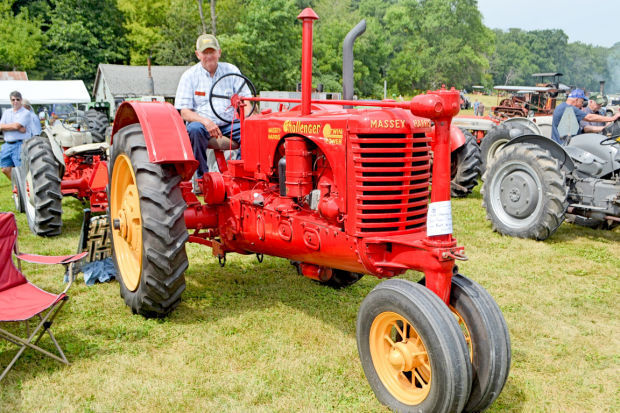 Kurt Kelsey of Iowa Falls, atop his 1938 Massey-Harris Challenger, on display at the Cedar Valley Memories show Saturday at Osage. 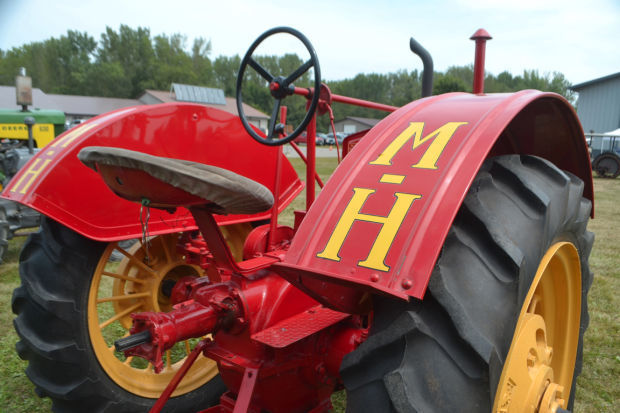 The back view of Kurt Kelsey's Massey-Harris Challenger.

OSAGE | There is a reason that the name of Kurt Kelsey’s 1938 Massey-Harris row-crop tractor has some significance for the Iowa Falls farmer.

It was called The Challenger — and it was indeed that for Kelsey, he’ll tell you with a chuckle.

"It sat in a field for 40 years," he said, standing next to the now-restored, bright-red machine. "It was in pretty tough shape."

Kelsey had one of many Ford, Ferguson, Massey and Harris tractors featured during the Cedar Valley Memories Show, located on grounds just west of Osage off Highway 9. The power show continues through today.

Kelsey was not swayed by the first look of his acquisition. His dad had a Massey-Harris tractor, so it meant something to him to get one and restore it.

When Lawrence Schmidt of Osage decided to sell his Challenger back in 1984, Kelsey struck the right deal and took it home.

"Even though it was in bad shape, I knew it was restorable," he said.

The entire tractor needed tender loving care, from overhauling the mechanics to trying to find the right decals for the piece.

But Kelsey did it and today the Challenger often is featured in classic tractor calendars, books and lots of shows.

It is a popular sight, if Saturday's visitors were any indication.

It is a machine with many first-time features. Its Twin Power feature was designed so the tractor had two power output ratings, at 1,200 rpm and 1,400 rpm.

This particular version of the Challenger also was only produced one year. This Challenger was the first red Massey tractor; all those before it were either green or gray, Kelsey said. Few collectors are lucky to have one, he said.

He is also chairman of the Iowa Massey Collectors Association. The association's show this year will be in Forest City in September.

And you can bet the Challenger will be there.

"Well I have to say, it sat over the winter, but it turned over on the third try," he said, a bit of pride tugging at his smile. "Not all (antique tractors) could do that."

Deb Nicklay is the editor of the Mitchell County Press-News, another Lee Enterprises newspaper.

Kurt Kelsey of Iowa Falls, atop his 1938 Massey-Harris Challenger, on display at the Cedar Valley Memories show Saturday at Osage.

The back view of Kurt Kelsey's Massey-Harris Challenger.