While both projects — one in Mason City and one in Clear Lake — are anchored by a hotel and conference center, their price tags and paths to reality are much different.

The cities named their hotel franchises less than a week apart last month. Hyatt Place is proposed in Mason City and GrandStay Hotel & Suites is proposed in Clear Lake.

Here is a side-by-side breakdown of the projects’ numbers:

2.5: The number of months since the Clear Lake City Council approved a letter of intent with WillowStream LLC, for a hotel, conference center and restaurant development in the Courtway Park Subdivision east of Interstate 35 and north of Highway 122, where Andrews Prestressed Concrete once stood.

Five: The number of councilors who’ve had input on the proposed project.

One: The number of administrators the city has had during the project. Scott Flory has been the Clear Lake city administrator for 18 years.

One: The number of developers who’ve been involved in the project. David Harchanko, president of Apollo Development LLC, based in Monticello, Minnesota, and Lorri and Todd Hall of Sheffield are members of WillowStream LLC.

21: The date in October that the Clear Lake City Council unanimously approved a development agreement with WillowStream LLC for a hotel, conference center and restaurant project involving GrandStay Hotel & Suites and Jethro’s BBQ.

5.8: The number of acres WillowStream LLC purchased in the Courtway Park Subdivision for the hotel, conference center and restaurant project.

16 million: The developer’s estimated cost in dollars for constructing, furnishing and equipping of the hotel, conference center and restaurant.

26,949: The total square footage of the hotel, conference center and restaurant project, according to site plans presented Oct. 29 to the Clear Lake Planning and Zoning Commission.

75: The minimum number of hotel rooms the four-story contemporary-looking GrandStay Hotel & Suites, a Minneapolis-based will possess.

400: The minimum number of people the conference/meeting/event will be able to accommodate.

25: The minimum number of full-time equivalent jobs the development would create in Clear Lake.

4 million: The maximum amount in dollars Clear Lake would offer WillowStream LLC in an urban renewal economic development loan agreement after the project is completed. The city’s loan will be paid for with revenue from new property and sales tax generated by the development as well as future developments in the subdivision, current and future tax-increment financing and its consolidated urban renewal area.

12: The number of years after the project is completed that the loan would be forgivable.

Zero: The number of people who spoke or petitioned against Clear Lake’s financing of the hotel, conference center and restaurant project.

28: The latest date in November 2019 that Clear Lake and WillowStream LLC are expected to break ground on the hotel, conference center and restaurant project, according to their development agreement.

Zero: The amount of state money in dollars Clear Lake will receive for the project.

2020: The year in which the project is expected to be substantially completed, according to the development agreement.

6: The number of full years since the Mason City Council took its first action related to its downtown River City Renaissance project, which includes a hotel and conference center.

13: The number of council members who’ve had input on the proposed project since 2013 due to resignations and elections.

Two: The number of developers who’ve been tapped for the city’s hotel and conference center project since 2013, including G8 Development and Gatehouse Capital.

Two: The number of lawsuits filed against Mason City by Philip Chodur with G8 Development related to the downtown hotel project. The first was dismissed in January 2018, and a second — filed in November 2018 — is ongoing.

23: The date in July 2019 that the Mason City Council unanimously approved a purchase, sale and development agreement with Gatehouse Capital for the hotel and conference center component of the $39 million downtown River City Renaissance project.

Three: The number of acres Mason City agreed to sell to Gatehouse Capital for the hotel and conference center project.

24 million: The estimated cost in dollars of the hotel and conference center proposed in downtown Mason City.

95: The minimum number of hotel rooms the proposed Hyatt Place will include.

700: The estimated occupancy the conference center will accommodate.

20: The minimum number of full-time equivalent jobs the development would create in Mason City.

8.7 million: The project cost in dollars for Mason City, and its taxpayers, to be paid with tax-increment financing, reinvestment district funding and hotel motel tax collections.

Two: The number of bond issues that appeared on the November 2017 ballot related to the River City Renaissance project, including the hotel, after “Mason City Says YES,” a citizens group, submitted signed petitions.

74: The percentage of votes cast in favor of issuing urban renewal bonds for construction of The Music Man Square and hotel, skywalk and performing arts pavilion, not to exceed $14 million.

One: The on or before date in July 2020, barring what the existing agreement terms an “unavoidable delay,” construction on the hotel property and The Music Man Square will begin, according to the development agreement.

2023: The year in which the project is expected to be substantially completed, according to the agreement.

Photos: Mason City in its heyday

The developer working with Mason City on a hotel/conference center project now must have its financing secured by February 2020.

A look forward: North Iowa government focus on development in 2020

Throughout the North Iowa area, there's a lot of work potentially coming over the next work.

Ambulance services will now be closer to the people who need them in Cerro Gordo County.

A holding pattern for Mason City's RAGBRAI bid, for now

There's still a lot to shake out before Mason City's bid to host an Iowa staple in 2020 can be accepted.

There is no shortage of talent at Mason City High School.

The Clear Lake City Council has scheduled a public hearing related to a proposed urban revitalization area for 6:15 p.m. Monday. 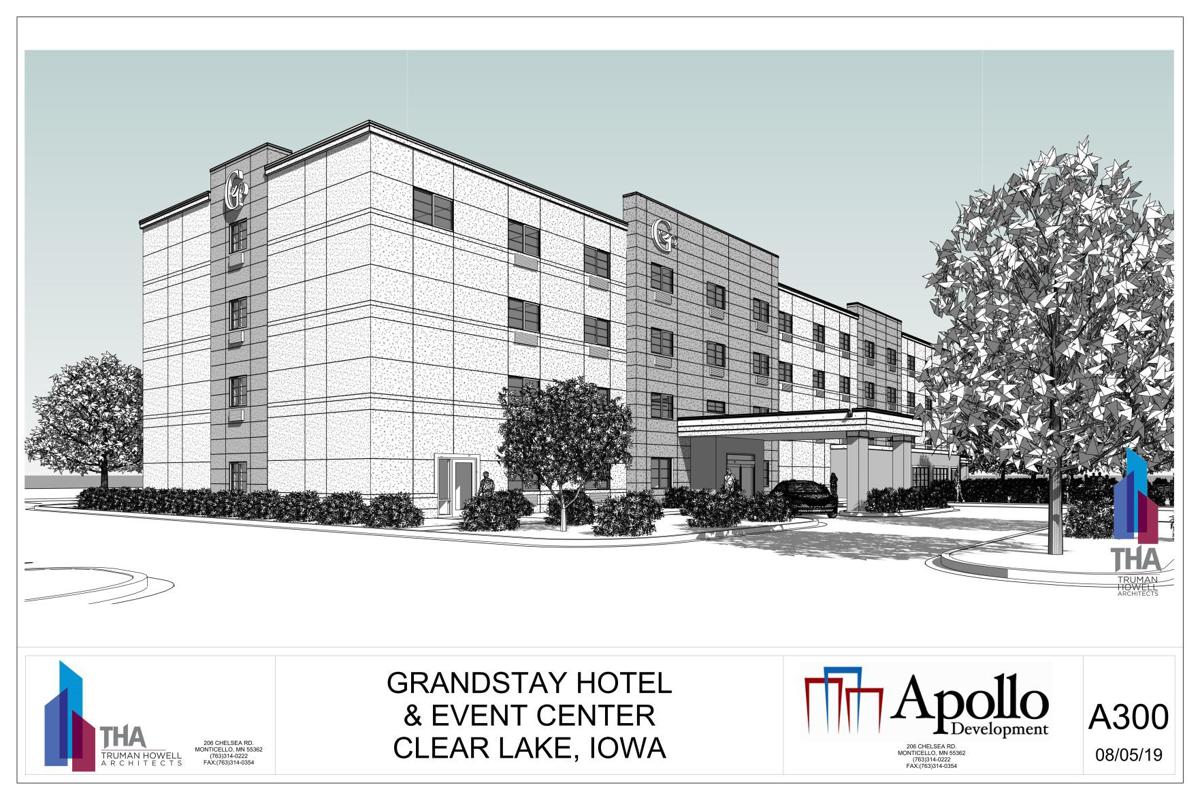 A conceptual design of the GrandStay Hotel & Suites proposed in Courtway Park Subdivision east of Interstate 35 in Clear Lake.

Mason City officials have finalized a deal with Gatehouse to develop a downtown hotel. 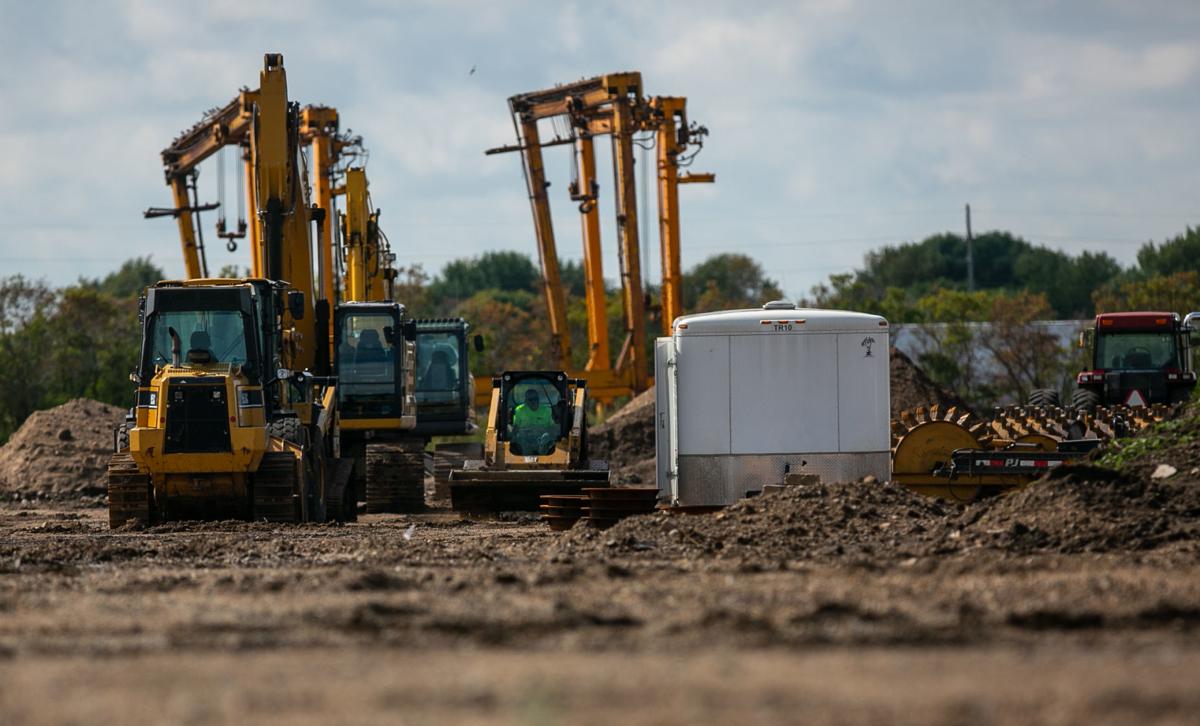 A worker drives machinery at the Courtway Park Development Subdivision site in Clear Lake on Thursday. 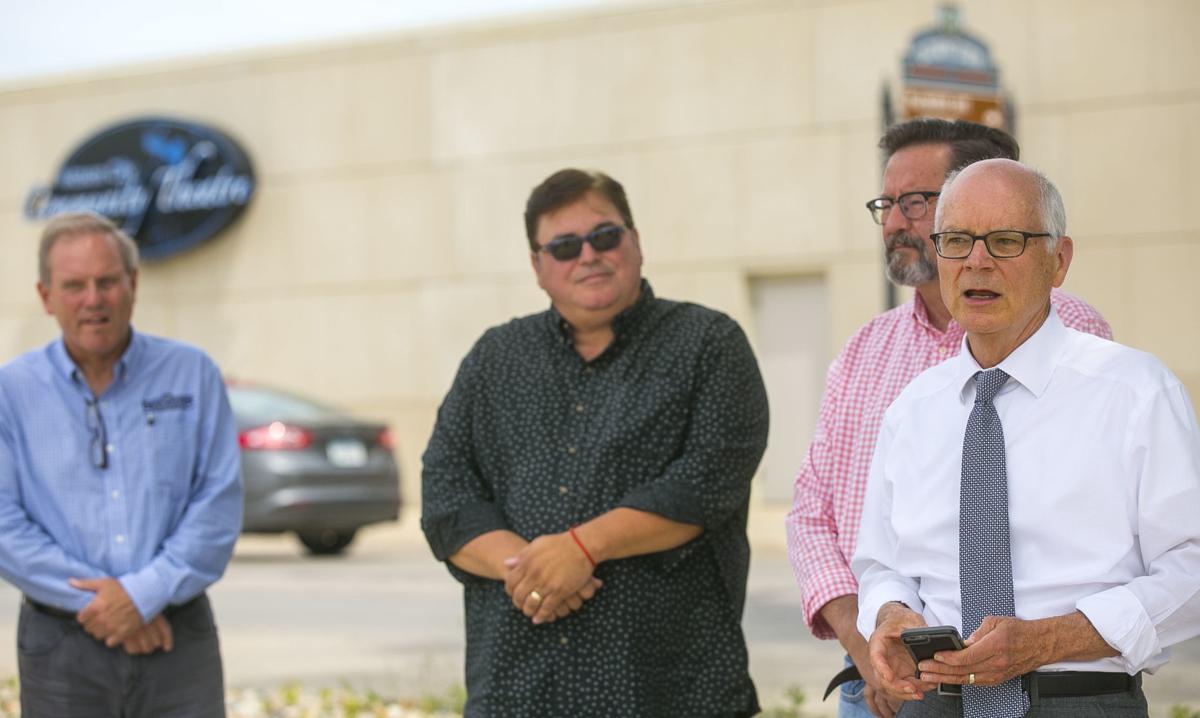 Mason City Mayor Bill Schickel, right, gives a statement after he and other city officials toured a future hotel site in the Southbridge Mall parking lot with Gatehouse Capital representatives on Wednesday. David Rachie, a representative for Gatehouse, the company bringing a multi-million dollar hotel to Mason City as part of the River City Renaissance, said after the tour that he hoped that construction for the hotel and conference center would begin by Spring 2020, but Gatehouse was targeting a late summer start. Schickel noted that once completed the hotel would be one of the largest tax payers in the city.