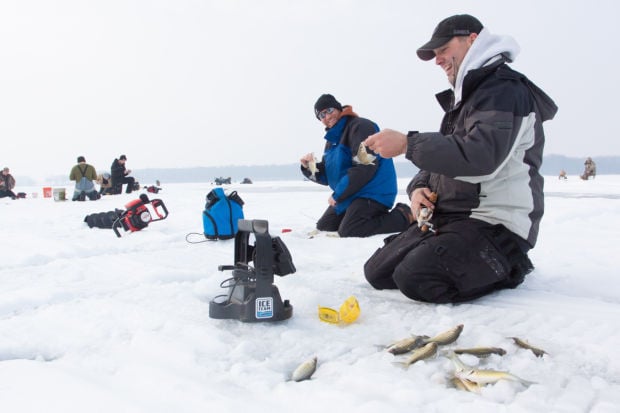 Mark Novotny (left) and Jason Hulsing find a school of eager biters during the opening minutes of the Yellow Bass Bonanza. 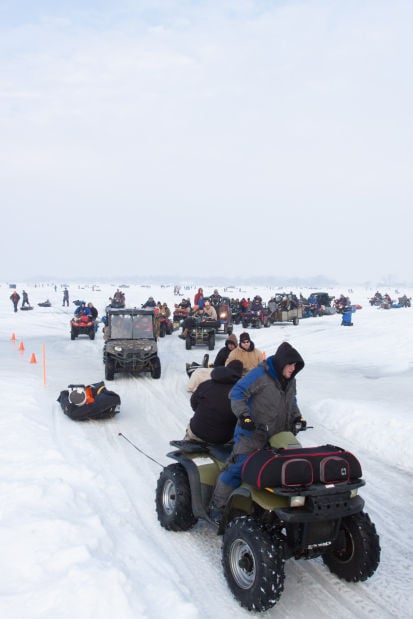 Contestants line up to cross the sandbar at McIntosh Woods State Park on their way to the big lake during the third annual Yellow Bass Bonanza last month. The winners (not pictured here) have been accused of cheating. 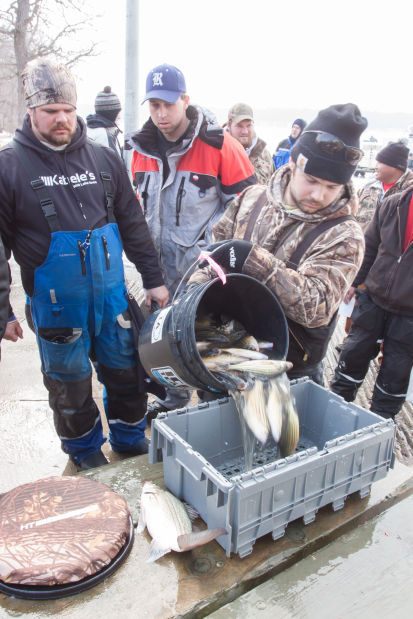 Nick Meyer (left) and Chris Preston watch as their fish are drained and counted prior to weighing. The pair claimed second place with 50 yellows weighing 13.85 pounds.

TIM ACKARMAN For The Globe Gazette

Most fished with a partner, although a few decided to go solo. Whether working alone or as a pair, each team could bring a maximum of 50 yellow bass to the scale.

For some it was no problem.

Kevin Hulsing and Mark Novotny headed to the big lake immediately after the 9 a.m. shotgun start. They had their first 50 yellows before 10 a.m.

“And we thought we were going to have to work for them,” said Hulsing, a Rockwell native now living in Cedar Rapids.

Despite the early success the duo kept their lines wet in hopes of adding heavier fish.

(There is no daily or possession limit for yellow bass. The 50-fish maximum was only for the tournament.)

Hulsing said he fished on Clear Lake often as a youngster and still comes up regularly. He competed in the two previous Bonanzas as well, finishing ninth and 11th.

A relative newcomer to ice fishing, she was taking in her first tournament at the invitation of Ice Team Pro Rod Woten from Des Moines.

“He knows what he’s doing, so I said absolutely,” Danaher explained.

Woten was participating in his third Bonanza.

“I’ve been here from the beginning,” he said. “I can’t believe how it’s grown.”

Woten and Danaher also had their first 50 by mid-morning.

“It’s a good thing when you have to start upgrading,” Woten said.

Charles Weida of Riceville was on his second tournament of the weekend after fishing Lake Hendricks near Riceville the day before.

“Since I’ve been retired I get to fish a little more,” he said.

Although the bite proved slow for Weida, he still enjoyed the outing.

“It’s a beautiful day, anyway,” he noted. “We love coming over here.”

Judging by the record turnout and the number of repeat participants, it seems a lot of anglers love Clear Lake and the Bonanza.

Winners Jason Schuttler of Manly and Aaron Lauber of Clear Lake finished 30th in the first Bonanza and seventh in the second.

Fishing in about nine feet on the big lake, the duo had most of their luck early.

“We found them a half-hour into it and we didn’t move,” Schuttler said.

The fish didn’t seem particular with regards to the lure or bait, Lauber said. “We couldn’t keep them from biting.”

Schuttler said they caught well over 100 yellows in compiling their winning basket.

The pair landed over 200 yellows fishing in both the little and big lakes, although they said most came from the main basin.

“Tungsten jigs, rattle spoons, it didn’t seem to matter,” Meyer said. He noted they tipped their offerings with either red or white wigglers.

Although the third annual Yellow Bass Bonanza is history, there are still opportunities for anglers to win a little extra cash.

Mason City Powersports and Truck Specialties teamed up to sponsor a tagged fish contest during the Bonanza. Ten tagged yellow bass were released in the tournament area west of the "thin ice" signs located roughly between the north shore pump station and Dodge’s Point.

A tournament angler who caught the one fish with the winning number, 3082869, would have claimed a Polaris Sportsman ATV and Cargo Pull Utility trailer.

Since none of the tagged fish were caught, organizers Kevan Paul and Chris Scholl decided to sponsor a prize of their own.

An angler who catches the fish with the winning tag will win $100 while the other nine yellows will be worth $50.

The sequentially numbered tags are pink, about 2 inches long and attached to the dorsal area.

Anglers should take the tagged fish to The Crazy Minnow Bait Co., 1124 S. Eighth St. in Clear Lake, to claim their winnings.

CLEAR LAKE | One of two men accused of cheating at Clear Lake's Yellow Bass Bonanza fishing tournament is due in court Monday.

Mark Novotny (left) and Jason Hulsing find a school of eager biters during the opening minutes of the Yellow Bass Bonanza.

Contestants line up to cross the sandbar at McIntosh Woods State Park on their way to the big lake during the third annual Yellow Bass Bonanza last month. The winners (not pictured here) have been accused of cheating.

Nick Meyer (left) and Chris Preston watch as their fish are drained and counted prior to weighing. The pair claimed second place with 50 yellows weighing 13.85 pounds.