One of the only two B-29 Superfortress bombers that is restored and flight-worthy is in Mason City for the B-29 Doc Flight Experience tour Wednesday and Thursday, and flights on Thursday morning.

A handful of North Iowans took the 40-minute flight Wednesday from St. Paul to the Mason City Municipal Airport and all had the same reaction.

"It was awesome," said Guy Minert, from Mason City. "I've flown a few times, but this just catapulted to the top of the list."

The youngest person on the flight was 5-year-old Liam Kyle, the son of North Iowa Air Service Vice President/Chief Pilot Todd Kyle. He was jazzed that he was able to sit in the bombardier's chair the entire flight.

"I really liked that I got to sit in the nose of the plane," said Liam. "I could see everything from the window. It was so cool."

Alice Hanley thought the flight on the B-29 bomber was "incredible" and looked at it through a historical lens.

"It puts a whole new perspective on the World War II movies you watch, especially the fight scenes," she said. "It was loud, but it was a lot smoother ride than I thought it would be. The views from the bubble windows were amazing."

According to Boeing's "Historical Snapshot," B-29s were primarily used in the Pacific theater during World War II. As many as 1,000 Superfortresses at a time bombed Tokyo, destroying large parts of the city.

After the war, B-29s were adapted for several functions, including in-flight refueling, antisubmarine patrol, weather reconnaissance and rescue duty. The B-29 saw military service again in Korea between 1950 and 1953, battling new adversaries: jet fighters and electronic weapons.

The last B-29 in squadron use retired from service in September 1960.

Josh Wells, the executive director of Doc's Friends Inc., the nonprofit managing the operation of the Boeing B-29 Superfortress known as Doc, said he is lucky to be able to fly in the historic plane so often.

He said what makes the operation successful are the volunteers.

During the 2000-2016 restoration period, Wells said there have been 450,000 volunteer hours, with thousands more since Doc has taken flight in 2016 after years of restoration efforts.

Wells said he is moved each time he sees a WWII veteran approach and touch the B-29 Superfortress. He said they are transformed to when they were 18 years old.

Cockpit tours of the B-29 Superfortress were Wednesday (3-7 p.m.) and Thursday. Gates open at 11 a.m. Thursday following two morning ride flights and will close at 3 p.m.

Admission for the static display event and cockpit tours is $10 per person.

Wells said that as of Wednesday, the flights were half full, but he expects once people see the B-29, they will go fast.

Ticket prices range from $600 to $1,500 for a seat in the nose of the plane. That is primarily due to the cost of operating the four-engine plane, which is about $3,600 per flight hour.

"It's an experience you will never forget," Wells said.

For details about the B-29 Doc Flight Experience and to purchase ride tickets, visit www.b29doc.com/rides.

Doc was one of 1,644 B-29 Superfortress bombers built at Boeing Wichita's Plant II.

The B-29 rolled off the final assembly line in 1944 and was delivered to the United States Army Air Forces in March 1945.

Here's a look at how Doc came to be:

• Doc's storied career include overseas missions and a stint as a member of a radar calibration squadron in New York.

• The B-29 Superfortress was one of a squadron of eight bombers named for Snow White and the Seven Dwarfs that were a part of the radar squadron.

• In 1956, Doc was decommissioned from the radar squadron and moved to what most thought would be its final resting place.

• Doc was rescued in 1987 by a group of historians – led by Tony Mazzolini and backed by the United States Aviation Museum – with the dream of restoring the B-29 and getting it back in the air.

• The plane's restoration began in California in 1987 and after a long hiatus due to a poor economy, resumed when the plane returned to Wichita in 2000.

• A non-profit organization called Doc's Friends was established and the restoration restarted.

• Doc's Friends estimated the restoration of the B-29, getting it in flying condition and securing a permanent hangar took about $10 million.

• Doc is one of only two restored B-29s in flying condition.

• Doc's first flight after restoration was in 2016.

• Learn more about the history of the project and more at: www.b-29doc.com

B-29 Doc Flight Experience to land at Mason City airport

The B-29 Superfortress known as Doc will bring its B-29 Doc Flight Experience tour to North Iowa on Wednesday and Thursday.

For nearly two decades, Pam Osgood has had one of the best seats in the house for watching the constant growth at the Mason City Municipal Airport.

Carl Anderson was witness to history in the making aboard the USS Hornet aircraft carrier 50 years ago.

Mason City Fire Department gets into the water

The Iowa Transportation Commission on Monday approved $7.6 million for the fiscal year 2020 State Aviation Program, and the Mason City Municip… 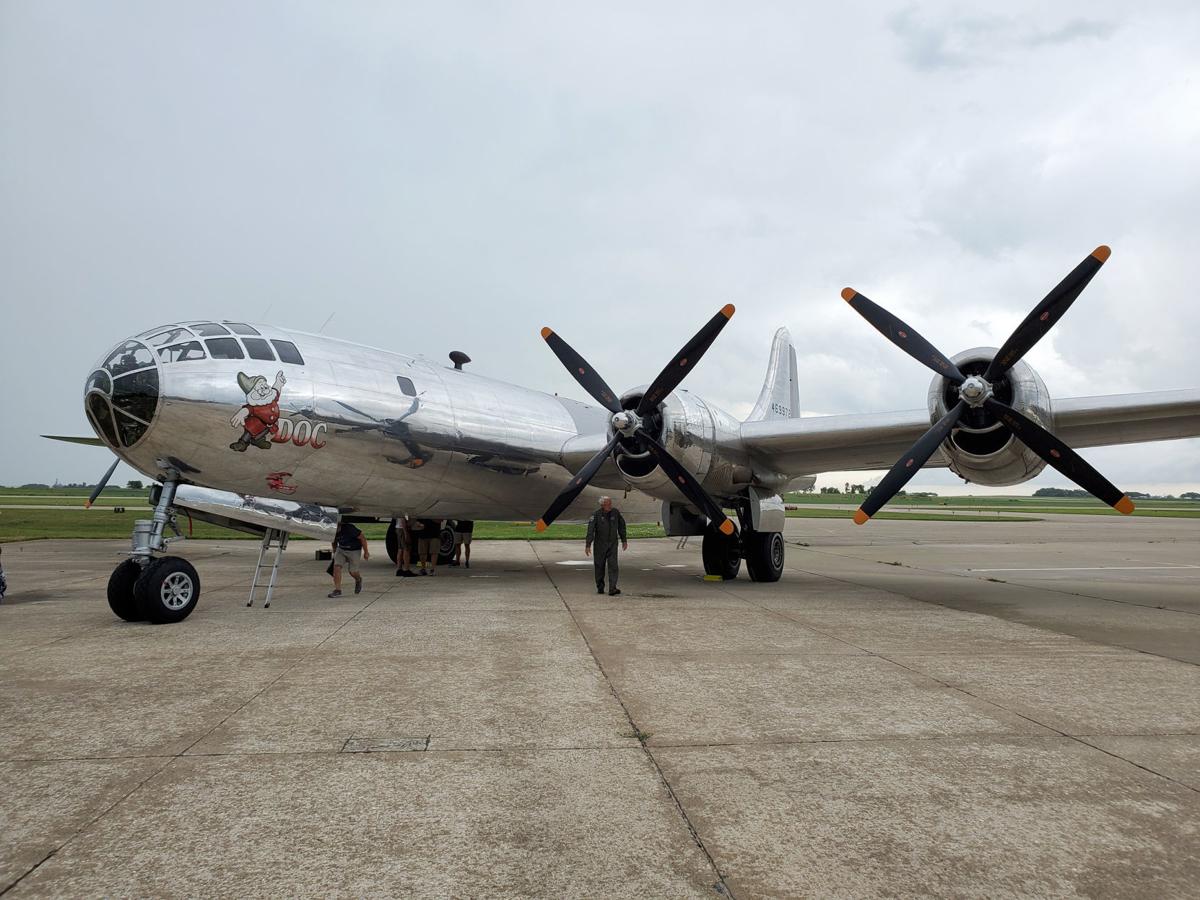 The B-29 Superfortress known as Doc landed just after 11 a.m. July 17 in Mason City and offered people a chance for tours and flights. 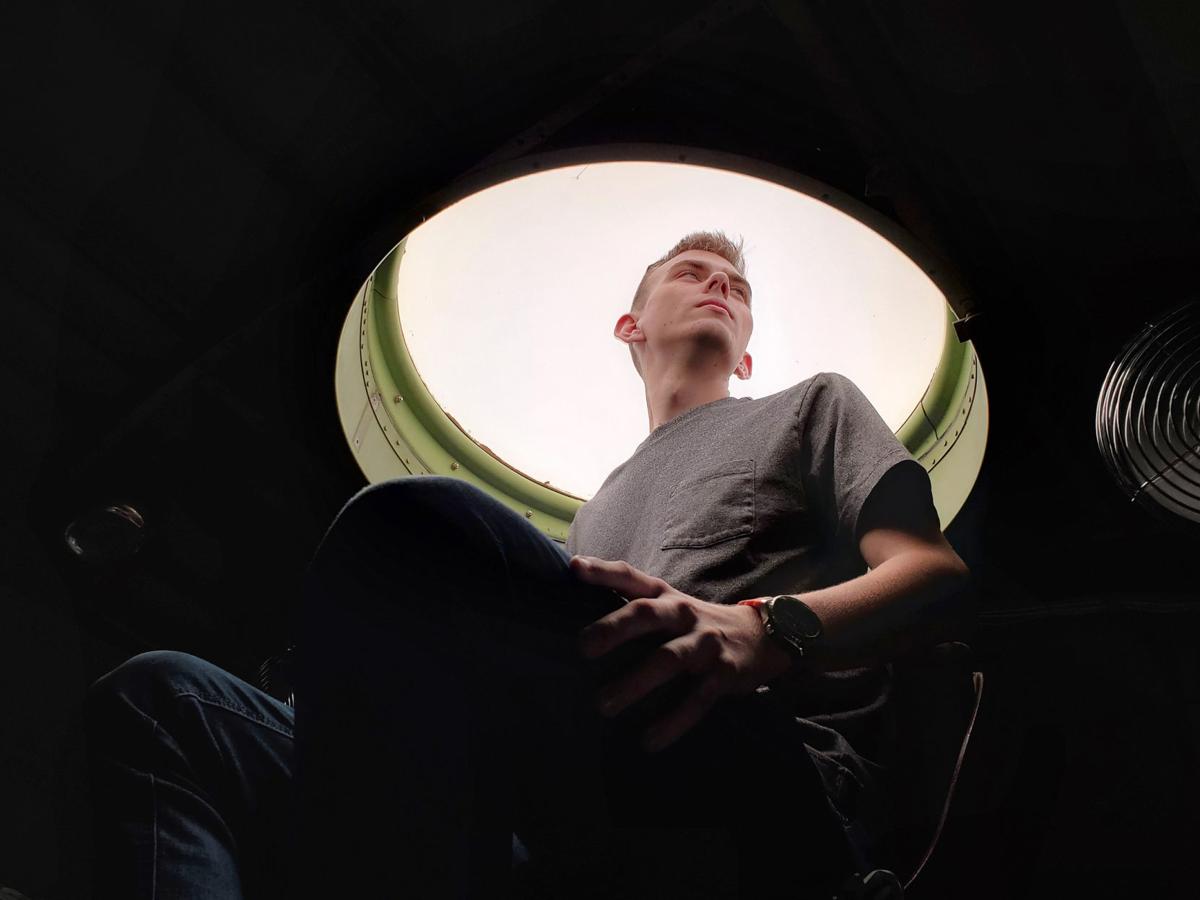 Guy Minert of Mason City was one of a handful of North Iowans who flew in the B-29 Superfortress "Doc" on Wednesday. He is looking out through the top observation bubble. 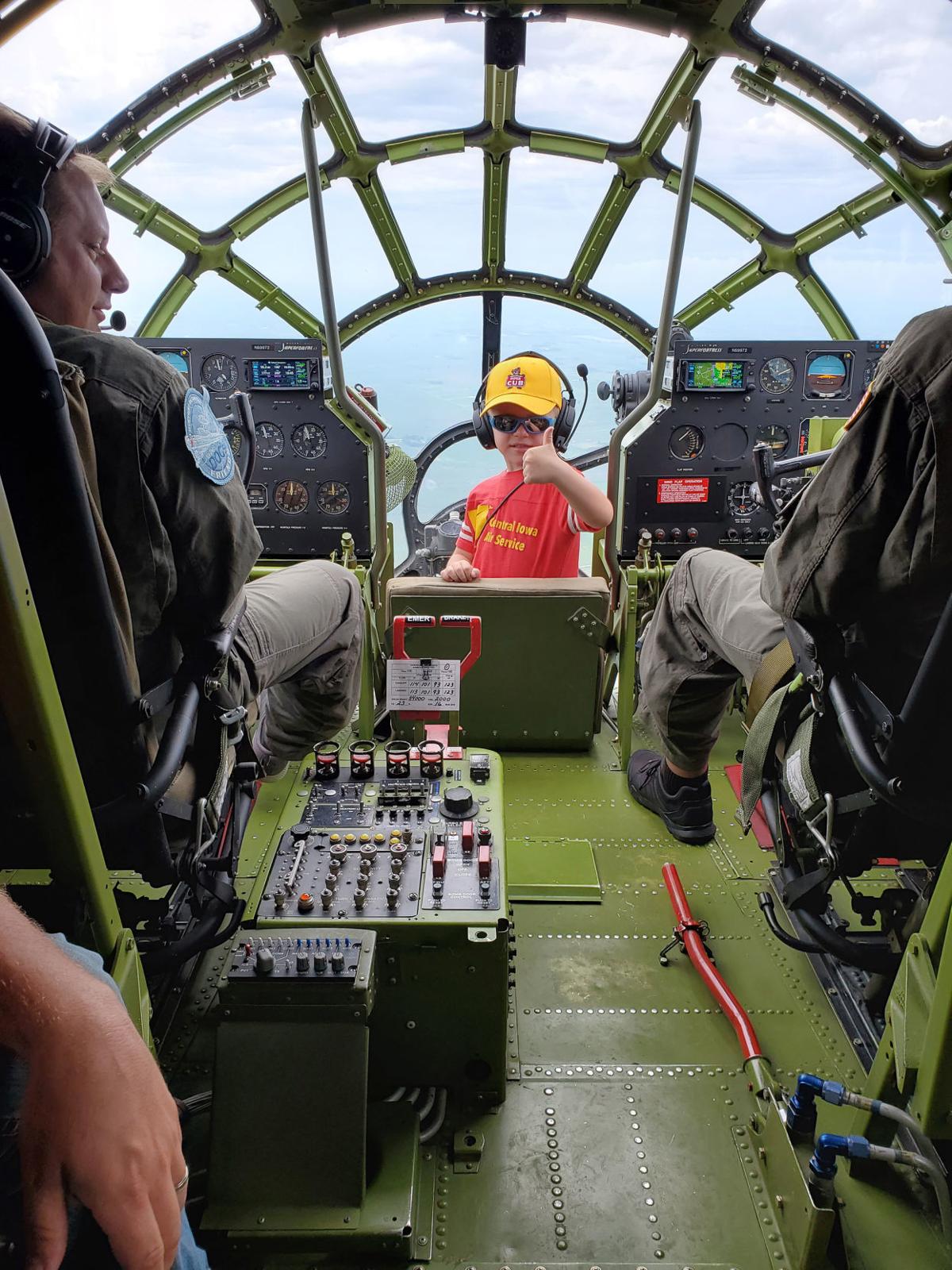 Liam Kyle, the 5-year-old son of North Iowa Air Service VP and Chief Pilot Todd Kyle, gives the thumbs up from the bombardier's seat at the very front of the B-29 Superfortress on its Wednesday flight to Mason City. 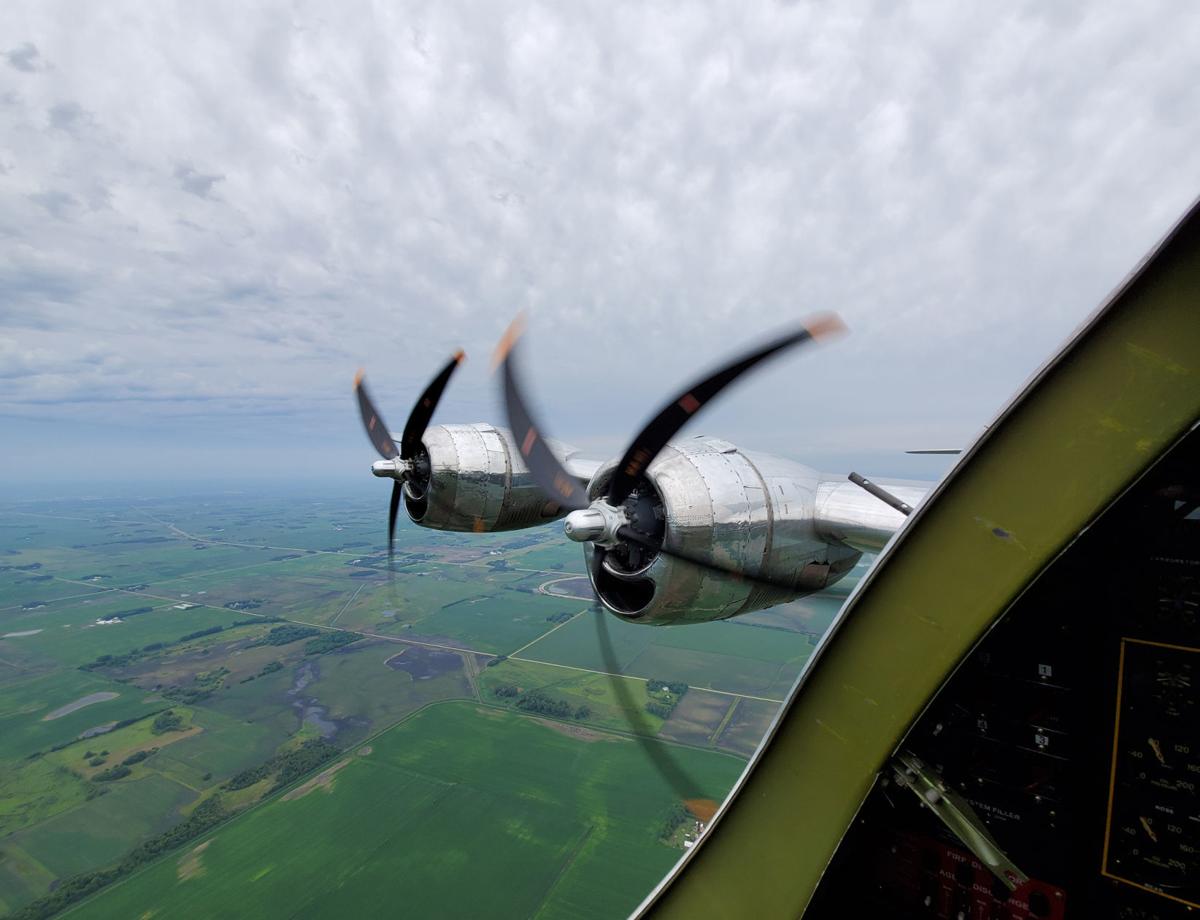 The propellers of the B-29 Superfortress "Doc" look like they are barely turning during the 40-minute flight Wednesday from St. Paul to Mason City Municipal Airport. 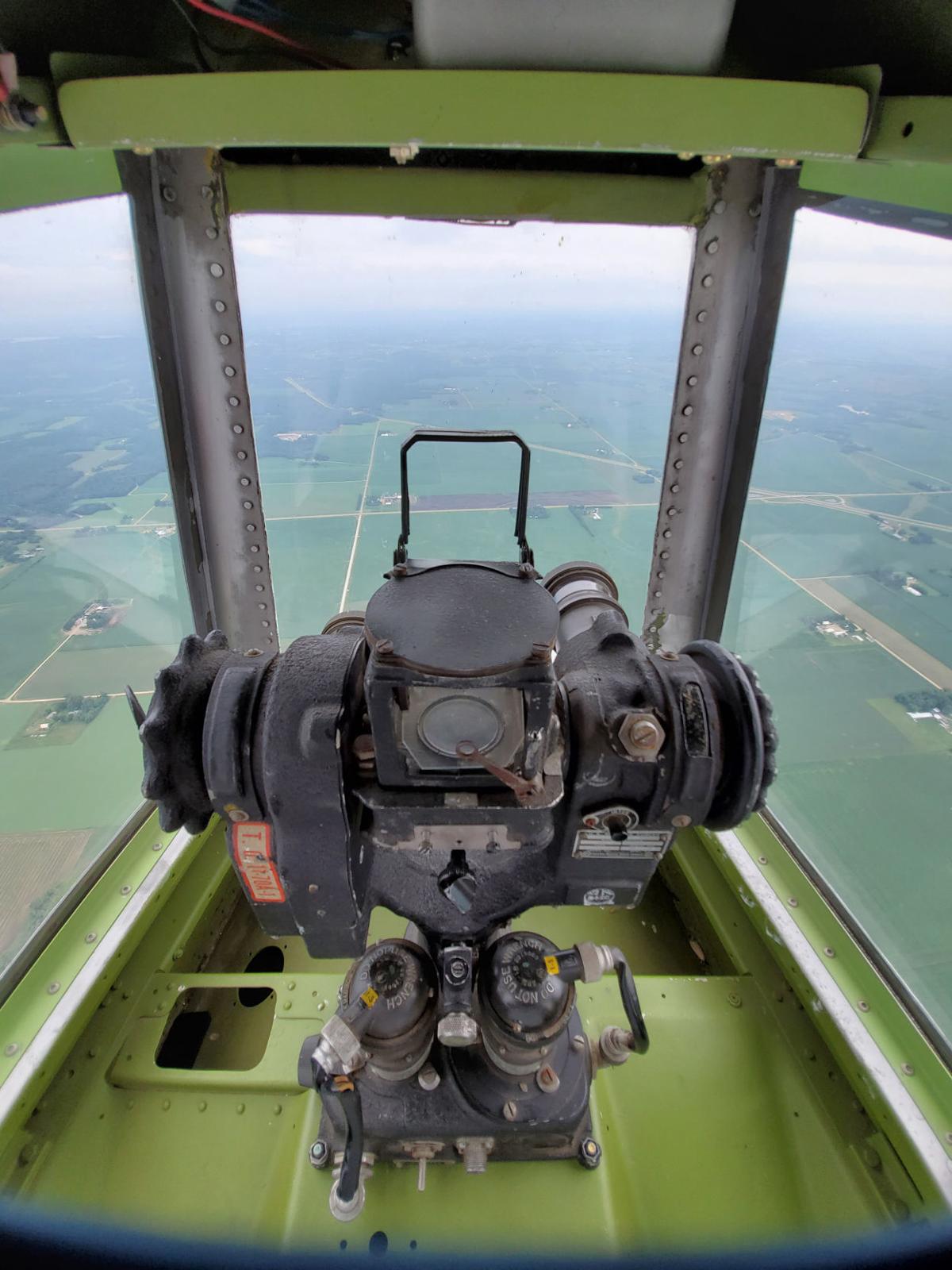 The back gunner position in the B-29 Superfortress "Doc" offers a good view of where the bomber has been.