The increased number of Iowa deaths in May illustrates the severity of the new coronavirus pandemic and provides a dire warning for spiking cases numbers here, experts say. 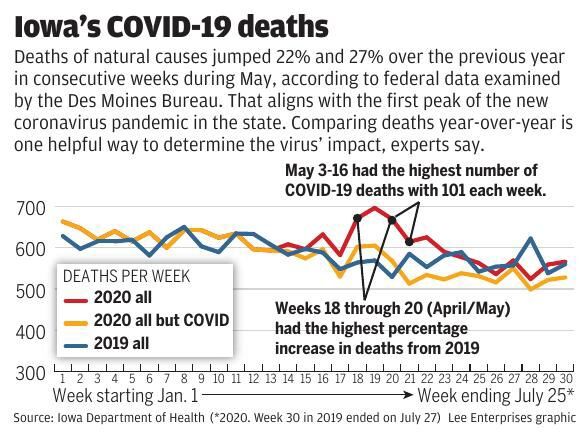 Federal data tracks weekly deaths, and experts say comparing the number of deaths in a given year to historical trends can illustrate the impact of public health events like a pandemic. For example, medical experts often use the metric to determine the severity of an annual flu season.

Iowa’s first wave of coronavirus cases and hospitalizations surged through April and peaked in early May, state data shows, just before the increase in deaths over the previous year.

“That is certainly one of many measures to confirm the fact that the coronavirus is in fact a phenomenon unlike anything we have seen in recent memory,” said Dr. Austin Baeth, an internal and palliative medicine physician at UnityPoint Health in Des Moines. “It is proof to the denialists that the coronavirus is actually a killer. It clearly shows that this is more serious than influenza.

“This data is one of many pieces of information that add weight to the fact that this is a historic crisis that we’re seeing.”

As of Friday afternoon, nearly 1,100 Iowans had died as a result of COVID-19, the disease caused by the new coronavirus. Over roughly six months, more than 62,000 positive cases of the virus had been recorded in Iowa.

The increase in Iowa deaths started in early April, and the difference widened until that stretch in May, according to federal data.

Drilling down further, during consecutive weeks ending May 9 and May 16 of this year, the number of deaths in Iowa spiked at 22.3% and 26.5% increases over the same week the previous year.

State data, which is compiled monthly instead of weekly, shows roughly the same. The number of deaths in Iowa increased 17% in May, according to state public health data.

“It’s of great interest,” said Dr. Louis Katz, Scott County Health Department medical director and an infectious disease specialist. “We’ve used (excess deaths) for years and years with influenza, counting excess deaths during the influenza season in order to have a corroborating metric for the case reports. And that’s what it is: a corroborating metric for (measuring) the impact. It’s important stuff.”

The increase in deaths gradually lessened in the weeks following that May spike, and 2020 deaths have been more closely tracking 2019 since mid-June, the federal data shows. Iowa deaths increased 2% in June, according to the state data.

But Katz and Baeth warned that with coronavirus cases, hospitalizations and deaths all on the rise again in Iowa — cases are higher now even than the first peak back in May — the state could be headed for another stretch where excess deaths far exceed the previous year.

With those numbers increasing, Gov. Kim Reynolds this past week for the first time since she reopened the state after the first quarantine in April reinstituted some mitigation strategies. She ordered bars and nightclubs closed in six counties, primarily those with universities. Those areas are seeing spikes in numbers as college students have returned to campus for the fall semester.

“I am certainly concerned that we are heading toward catastrophe,” Baeth said. “Death is a lagging indicator (meaning deaths typically show up in the data a few weeks after cases and hospitalizations). We are already seeing deaths on the rise and we are seeing cases rise even faster than that, meaning even three weeks from now, it’s going to be much worse.

“I think we are in for a very bumpy ride in the weeks and months ahead, in our state, in particular.”

It could be multiple weeks until the full impact of the current wave of cases and hospitalizations is known, Katz said.

“You can see that the surge in March and April, that first part of the first wave, was reflected more than a month later in excess deaths,” Katz said. “So the surge that we’re seeing now in Iowa, which is considerably larger, will not be reflected until probably late September or October, maybe even longer.”

Take a look at stories from the weekend you might have missed:

While not an MVP season, sports betting in Iowa is getting good marks for a hit-and-miss rookie year.

As the COVID-19 pandemic continues, some North Iowa establishments have had to temporarily put their services on hold.

Rapper Kanye West will appear on Iowa ballots this fall as a presidential candidate after his campaign’s nominating petition survived a pair of legal challenges heard Monday by a state panel.