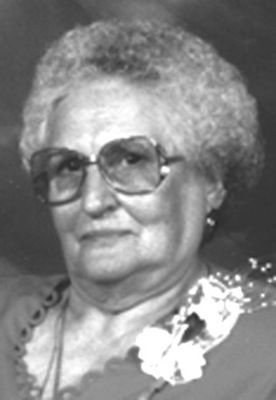 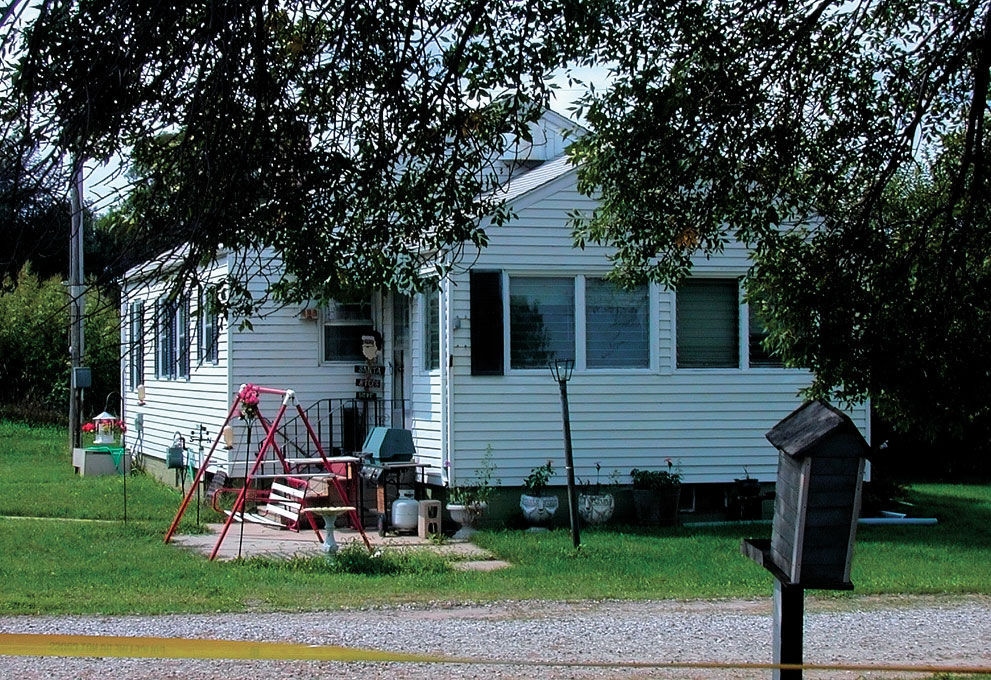 Ila Mae Clark was found beaten to death in her home Aug. 29, 2001. This photo shows the house, at 116 Iowa Ave. West, days after the murder. The house has since been torn down. 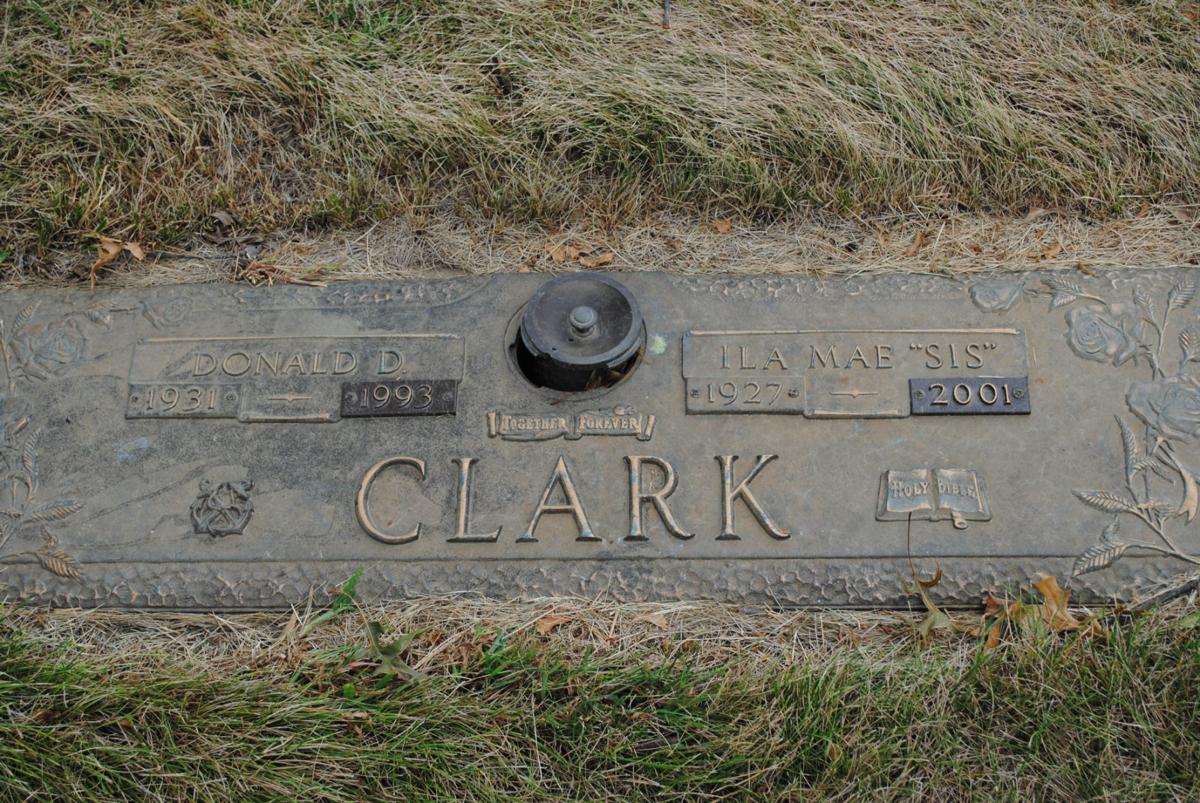 Ila Mae Clark was buried next to her husband, Don, at Rose Hill Memorial Gardens on Iowa Avenue, about 1 mile from where she last lived. Her funeral was held Sept. 4, 2001, on what would have been her 74th birthday.

MARSHALLTOWN | Ila Mae Clark’s grave marker at Rose Hill Cemetery is perhaps the only physical reminder of her Marshalltown years.

Family, former coworkers at Grandview Heights Nursing Home and the Iowa Veterans Home have memories. As do her friends at the local American Legion and VFW Auxiliary.

The one-story house was demolished years ago to accommodate a business development. The nearby apartment complex which employed Clark as manager and was once a motel is also gone.

However, yellowed Times-Republican newspapers bring the incident to life as if it were yesterday.

“Motive determined in local murder,” was the headline on a front page article published Sept. 13, 2001.

“Based on our investigation to date in this unfortunate murder, it appears as if at least $500 in cash is missing from Mrs. Clark’s home,” said former Marshalltown Police Chief Lon Walker. “Based on this, and the fact that there was forced entry into her home, we are assuming robbery was the motive in her murder.”

Police made the grim discovery at Clark’s home after receiving a 911 phone call about an injured and unresponsive woman. When they arrived Clark was dead and they immediately began treating the case as suspicious.

Finding the killer or killers was the job of then-Det. Brian Batterson and a team at the Marshalltown Police Department.

Batterson is now a captain and clearly remembers the crime.

He was on his way to execute a search warrant in a drug bust when a diverting call came, said Batterson in a story published Aug. 28, 2011.

Another officer was requesting assistance after responding to the 911 call at Clark's residence. Batterson entered the house and found the body of an elderly woman who had been beaten to death.

Batterson would soon learn her name and many other details about Clark's life. It is the details of her death, though, that Batterson wishes he knew more about.

Clark, who was less than a week away from her 74th birthday, was killed late Aug. 28th or early the 29th inside her house.

"She was a feisty old lady, and from what we see inside the (house) she may have confronted the people and that confrontation led to her death," he said.

Clark managed a seven-unit, L-shaped apartment complex. Many of the residents paid cash. About $500 was missing from her house, which was less than 100 yards from the apartment building.

No fingerprints and no DNA evidence were found.

One of the few pieces of evidence found is the object used to beat Clark. Batterson would not say what the object was, noting that it is one of the few ways to confirm the truth in a potential confession or witness account, but called it a "weapon of opportunity," likely in the house at the time of the break-in.

Clues at the crime scene lead him to believe that at least two people were in Clark's house, and possibly a third waited outside in a getaway car.

There were drug busts and loud parties at the apartment complex and a neighboring trailer court, "But nothing would even come close to this," Batterson said.

No witnesses were found.

"Nobody heard anything, nobody saw anything," Batterson said.

Clark would help anybody

Clark, who everyone called “Sis,” was born Sept. 4, 1927, in Wright County, according to her obituary. She married Donald Clark, her second husband, on April 14, 1962 in Princeton, Missouri. She moved to Marshalltown where she worked as a cook at the Iowa Veterans Home and at Grandview Heights Nursing Home. She was also a member of the American Legion and Veterans of Foreign Wars auxiliaries.

“She was a caring person. She’d help anybody,” neighbor Sandy Park said in a story published Sept. 1, 2001. “I can't understand why anybody would do this to her.”

Barcus was a self-admitted troubled teen when he met the Clarks. He'd been in 17 previous foster homes, but said, "This was the only one that I felt more or less taken in by."

Although originally intended to be yet another temporary placement, he ended up staying with "Sis" until he graduated from high school.

During his four years with the Clarks, the three would load up the Clarks’ pick-up camper for weekend fishing and hunting trips.

Clark not only knew how to use a shotgun, she also could lift or pull heavy objects, said Shelley VanDraska, one of Clark's five grandchildren. She recalled Clark helping her husband Scott on several occasions.

"She'd go out with him. After he'd shot a deer she'd help him drag it out of the timber and get it up in the truck," VanDraska said.

VanDraska, did not recall how Clark picked up her nickname, but she has a theory.

"It's something she had ever since I was born," VanDraska said. "I think it was because was kind of a sister to everybody."

Ila Clark, then a widow, hadn't slowed down in her 70s. She spent the last days of her life canning tomatoes for relatives, and preparing for a birthday trip to Meskwaki Casino.

The most promising lead in the case involved a man and a woman who had been living at a hotel on Iowa Avenue. The day after the murder, one member of the couple (Batterson did not want to release their names fearing that would cast unfounded guilt on them. "I'd hate to make their life more miserable," Batterson said) suddenly left for Louisiana. Interviews conducted with others said that person was "freaking out" and wanted to leave Marshalltown quickly.

Marshalltown police obtained a search warrant for their car, which Batterson feels may have been involved in the crime. Local officials in Louisiana did not immediately act on the warrant, and a few days later the car was involved in a rollover accident.

"Obviously there was blood from the people in the car, and the (local police) took all the stuff that flew out of the car in the accident and piled it back in the car, which made (the investigator's) job of looking for trace fibers very difficult," Batterson said.

Nothing helpful was found in the mangled car.

One of the most harrowing experiences of the case, Batterson said, was calling VanDraska to tell her about the car but then later making a second call to tell her that any evidence that may have existed was lost.

"There could have been something there. We'll never know," Batterson said.

One of the couple died years ago; the other once lived in Marshalltown, based on his or her last known address, but consistently refused to speak to the police.

After 12 months and more than 50 people interviewed, Batterson put the file away. It stayed in his desk for a few years until a man who was in a jail near Chicago told authorities there he had information about Clark's murder.

Batterson and another detective interviewed him, but he only provided speculation about the couple that had refused to talk.

"It was just finger-pointing," Batterson said. "Nothing significant."

The items found in Clark's house, including the weapon, are boxed up and are sitting in an evidence room at the Marshalltown Police Department.

VanDraska's logical side is doubtful justice will be served, but her emotional side hasn't closed the door.

"It's probably never going to happen, but I hope that it does, if that makes sense," VanDraska said. "I guess I've kind of accepted it, but I do hope that somebody would come forward."

“Someone, somewhere, knows more about this,” Batterson said.

This is a weekly feature highlighting some of Iowa’s unsolved homicides in the hopes that it will lead to new tips and potentially help solve cases.

The project is a partnership between the Globe Gazette and other members of the Iowa Newspaper Association.

Do you know something about the death of Ila Mae Clark? Call the Marshalltown Police Department at 641-754-5725.

Ila Mae Clark was found beaten to death in her home Aug. 29, 2001. This photo shows the house, at 116 Iowa Ave. West, days after the murder. The house has since been torn down.

Ila Mae Clark was buried next to her husband, Don, at Rose Hill Memorial Gardens on Iowa Avenue, about 1 mile from where she last lived. Her funeral was held Sept. 4, 2001, on what would have been her 74th birthday.