DES MOINES — State legislators gave a cautious nod Tuesday to Gov. Kim Reynolds’ plan to push the state’s general fund spending above the $8 billion for the first time in the 2021 fiscal year that begins July 1.

“I didn’t have that penciled in when I was thinking of a number to come up with so we’ll see,” said Sen. Michael Breitbach, R-Strawberry Point, chairman of the Senate Appropriations Committee, shortly after Reynolds unveiled a $8.093 billion state budget proposal for fiscal 2021.

The Republican governor’s new budget plan calls for a 4.4 percent boost, or nearly $343 million more than the $7.75 billion that would be spent this year – presuming that the GOP-run General Assembly goes along with her requests to pass a $111 million supplemental request to cover unpaid Medicaid costs and provide $20 million in disaster aid to flood-stricken regions of Iowa.

Reynolds’ spending plan would provide a 2.5 percent boost in state aid to K-12 schools that would total $100 million as well as increasing next year’s funding for Medicaid by $167 million, workforce and rural development initiatives, childcare and other priority areas but still leaving a projected $386.5 million surplus by June 30, 2021, according to staff briefing documents.

Higher education would see a boost of about $18 million more to institutions under the umbrella of the state Board of Regents and a $5.2 million general aid increase to Iowa’s 15 community colleges.

“I’m just anxious to see how she’s going to balance this budget because the spending that she’s doing and then the tax cuts that she’s proposing – they just don’t fit, that is not possible to do both like that and expect there to be money to fund all of those projects,” said Rep. Mary Mascher, D-Iowa City, a member of the House Appropriations Committee.

Included in the governor’s legislative package was a proposal to boost the state’s sales tax by one cent effective Jan. 1, 2021, and to use the proceeds to further drive down state income tax rates by $170 million and take over a share of county mental health costs to ease property tax levies with a net impact of reducing overall general fund revenue by $7.3 million in the second half of fiscal 2021.

Also, three-eighths of the money generated by the proposed sales tax increase would go into the Iowa Water and Land Legacy trust fund as prescribed by a 2010 constitutional amendment approved by Iowa voters, but the governor proposes changing the distribution formula so more money goes to water quality, conservation and natural resources and less to trails and recreational amenities. Initially, about $37.5 million of the sales tax increase would flow into the IWILL trust fund in fiscal 2021 and an expected $81.2 million would be generated in fiscal 2022. Overall, state officials project that increasing the state sales tax from 5 percent to 6 percent annually (along with 1 percent for local option and 1 percent for school infrastructure) would generate about $540 million.

According to the governor’s office, Reynolds’ proposed tax policy changes would build on income tax cuts passed in 2018 by accelerating the reduction in rates, meaning effective in fiscal 2023 the highest of four brackets would be 5.5 percent and the lowest rate would be 4.0 percent – compared to 6.5 percent and 4.4 percent, respectively, under current law.

On the property tax side, the governor proposed to have the state take over about $80 million in mental health costs currently funded by a levy capped at $47.28 per region. The new cost-share ratio of 70 percent state money and 30 percent county funding would be based on a lower county levy of $12.50 while generating enough revenue to cover the expected yearly cost of $130 million to fund adult and children’s mental-health commitments.

“The governor proposes what that budget looks like. The House and the Senate will determine whether they can meet those goals and whether their visions align with hers,” said Breitbach. “We’ll see how that works out.”

The governor’s budget plan also seeks to funding increases of $15 million for rural broadband connectivity, about $4 million more for Future Ready Iowa initiatives like Last Dollar Scholarships and employer innovations, and make changes to Iowa’s childcare rules that will carry a $600,000 cost in the first fiscal year.

The state is projected in end the current fiscal year on June 30 with a $465 million surplus but the governor’s staff indicated that about $111 million in supplemental funds -- $98 million for Medicaid and $20 million for additional flood relief – will push the general fund budget to nearly $7.75 billion.

Reynolds’ new budget plan would seek to spend about 95.5 percent of the revenue available under Iowa’s 99 percent spending limitation law in fiscal 2021, allocating about $342.7 million in new appropriations for a 4.4 percent increase.

“I thought she gave a great speech that’s very bold and brought forward a lot of issues that are going to be complex and take a lot of work but I know that our caucus is excited to get to work on a lot of things in there and we’re ready to go,” said Senate Majority Leader Jack Whitver, R-Ankeny.

The Clear Lake Community School District School Board approved the letter of intent with the City of Clear Lake on Tuesday night, outlining ho… 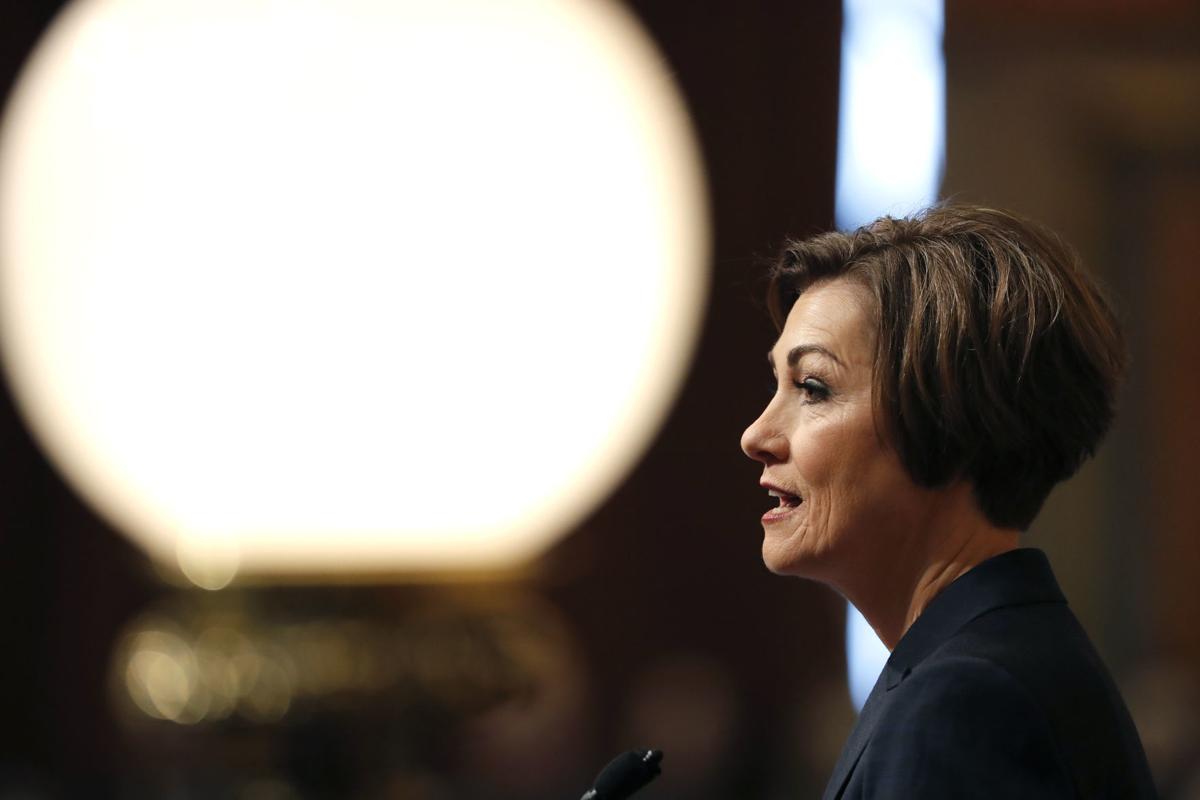 Iowa Gov. Kim Reynolds delivers her Condition of the State address before a joint session of the Iowa Legislature on Jan 14.