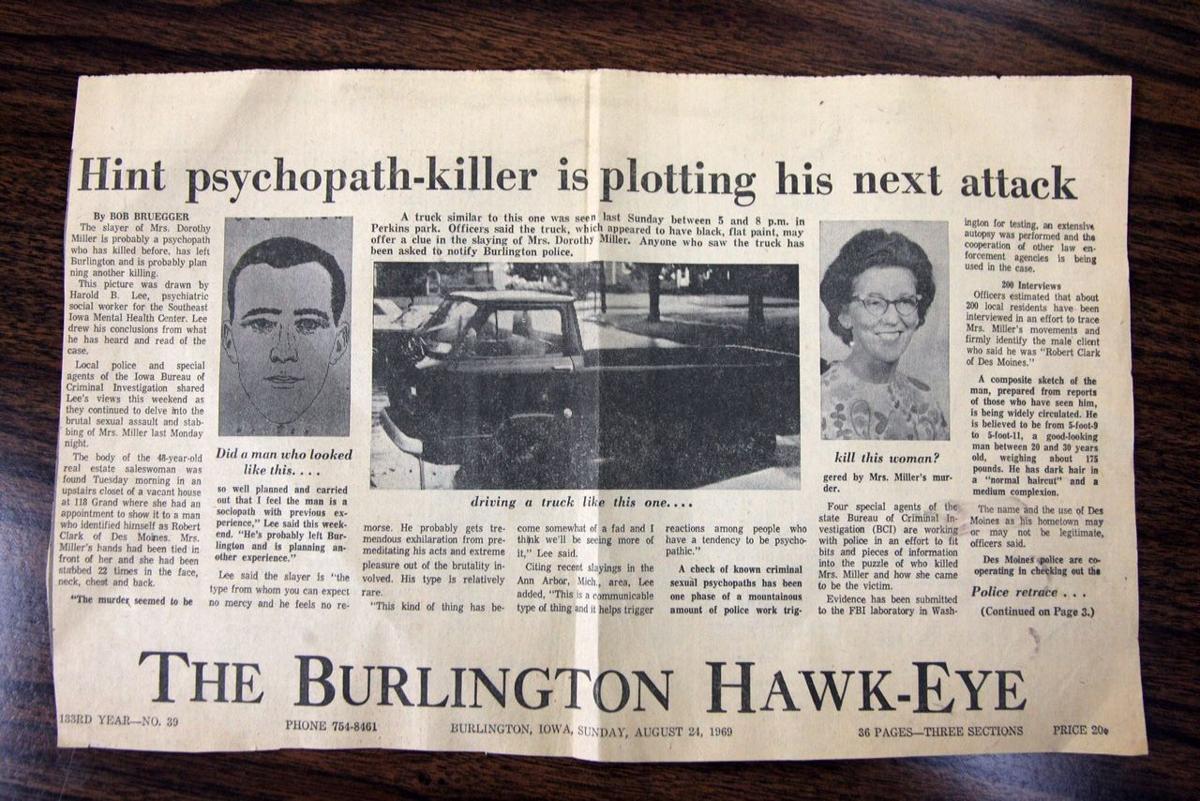 A copy of local newspaper coverage is part of the evidence on file in a cold case of the murder of Burlington real estate agent Dorothy Miller. The murder took place in 1969 and is the oldest unsolved case in Burlington. 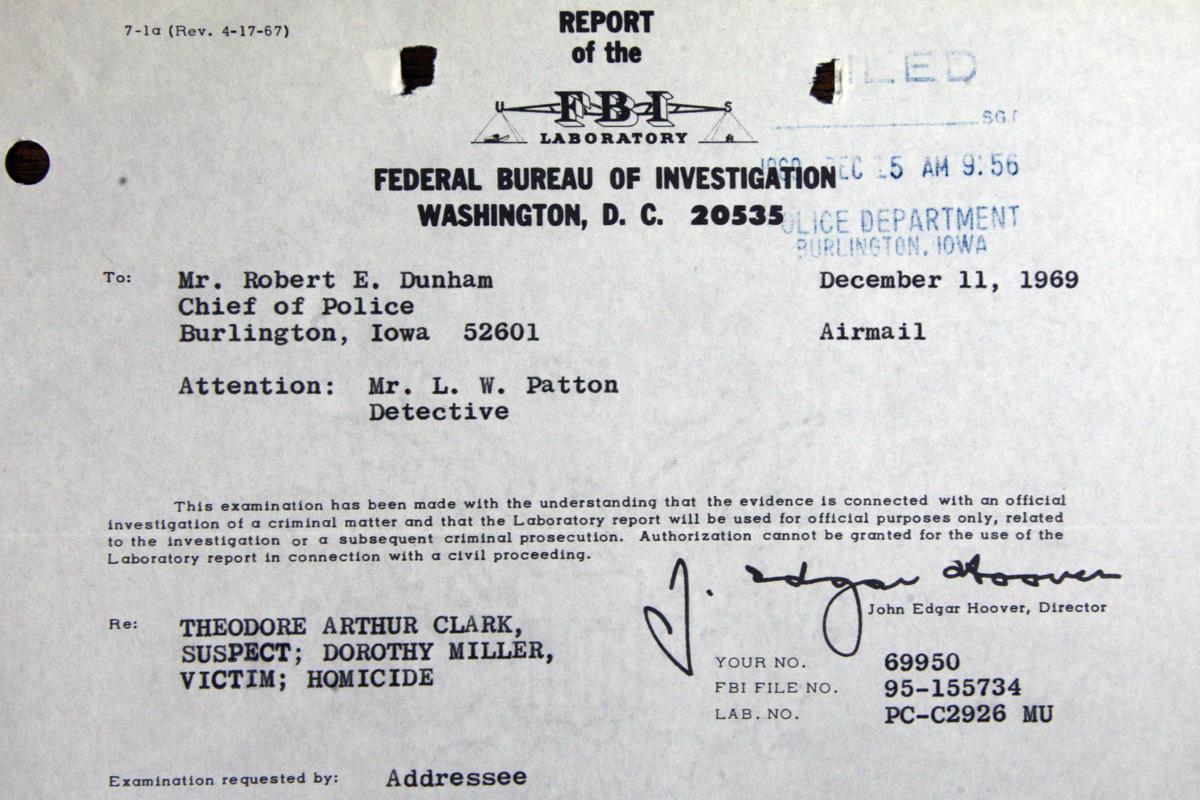 A paper with the signature of FBI Director J. Edgar Hoover is part of the evidence on file from the murder file of Burlington real estate agent Dorothy Miller. The murder took place in 1969 and is the oldest unsolved case in Burlington. 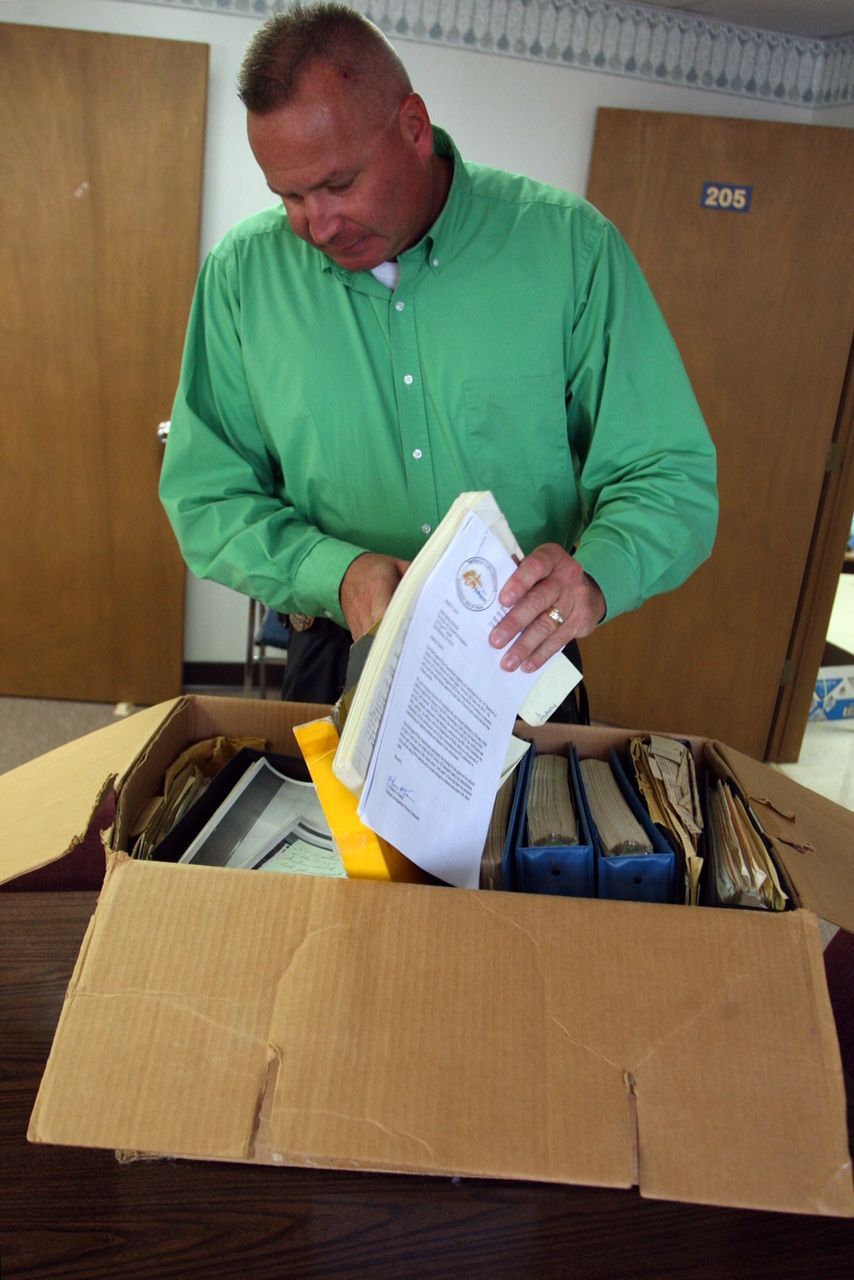 Burlington police Lt. Jeff Klein opens the box of evidence July 22 from the 1969 murder of Burlington real estate agent Dorothy Miller. The murder took place in 1969 and is the oldest unsolved case in Burlington.

While familiar terms today, they were chilling, terrifying, almost unexplainable to Burlington residents nearly a half century ago.

Local and state police used them to describe the person they believed raped then killed a popular 48-year-old Burlington grandmother.

It will be 46 years next month since her death, but her case file remains open and every Burlington police officer who becomes a detective is familiar with the case.

“Everyone in the department still knows about it,” said Lt. Jeff Klein, commander of Burlington’s criminal investigation division. “We send every officer to a two-week homicide school when they become a detective. When they return from the school, we hand them the Dorothy Miller file and ask them to review it to see if we have missed anything.”

Despite those persistent efforts, Miller’s murder remains a mystery.

“About the only thing I am confident saying is we don’t believe the person responsible was from the Burlington area,” said Klein, as he and Maj. Dennis Kramer recently sifted through boxes of witness statements and photographs.

“It’s my belief it was an individual who happened to be passing through Burlington. Being the small community it is, something would have stood out about who was responsible if that person had been local.”

Investigators and area mental health experts at the time had the same conclusion. Coincidentally, a carnival was in town that week.

“The murder seemed to be so well planned and carried out that I feel the killer is a sociopath with previous experience,” Harold B. Lee, a psychiatric social worker with the Southeast Iowa Mental Health Center, told The Hawk Eye a few days after police discovered Miller’s body.

The petite real-estate agent’s hands were bound in front of her with a rope. After she was raped, Miller was bludgeoned with a brick, stabbed 22 times and left semi-naked in an upstairs closet of a vacant house she was showing at 118 Grand St.

She was found the next morning by police after her husband, Fred Miller, reported her missing.

Detectives discovered a rope they believed was used to bind Miller and a brick used to beat her. Only the back door to the home was unlocked.

Miller told police his wife left their home about 7 p.m. that evening to meet with a “prospective buyer” of a house for sale.

Unlike her normal routine showing property for Bolick Realty, Miller decided on this night to meet the potential buyer without a chaperone. She had met him once before, two days earlier, when they visited the same property. Only that time her husband had accompanied her.

After talking with the man, who identified himself as Robert Clark, they agreed to meet again. Two days later, Clark called Miller. They agreed to meet at 7:30 p.m. to see the Grand Street home. Her husband of 29 years had to drive a truck early the next morning so he decided not to go with her that night.

Miller, who died in 2002 without knowing his wife’s killer, told police she had agreed to pick up Clark at the Maple Leaf Tavern, then drive to the vacant house.

Miller told police he went to sleep about 8:30 p.m. and when he woke up about 5:30 a.m. and realized his wife had not returned home, he called his daughter, Patricia Craven. They drove to the Maple Leaf Tavern, where they found Miller’s car parked a block away. They immediately drove to the police station to report her missing.

Not a random act of violence

Burlington detectives went to the vacant house and found her body.

The Burlington Police Department, which had 32 full-time officers including two detectives in 1969, began a neighborhood canvass that eventually led to more than 200 people being interviewed. However, no one could provide viable clues of her killer’s identity.

The Iowa State Bureau of Criminal Investigations was called for assistance. Investigators eventually cleared family, friends and acquaintances of Miller’s death. But with that knowledge, investigators became fearful the murderer left the area and was making plans for his next victim.

It was clear to police the killing was not a random act of violence.

As investigators dug deeper into the killing, the one major clue they developed was a description of a stranger who was seen at the Maple Leaf Tavern, 904 Maple St., a few hours before the killing.

Patrons there told police they had never seen the man before. They described him as a 5-foot-9 to 5-foot-11, good-looking, clean-cut man between 20 and 30 years old. He weighed about 175 pounds.

The patrons said the man was driving a dull, black cab-over engine pickup truck. The only thing he mentioned was he was from the Des Moines area and planned to move to Burlington.

Interestingly, investigators determined Clark had Miller call him at the Maple Leaf to set up the showing. Witnesses reported seeing Clark leave the tavern shortly after receiving a telephone call.

Police reports indicate witnesses saw Clark leave the tavern, go to a black truck and remove an unidentified object. A few minutes later, other witnesses saw Miller pick up Clark as he walked outside Riepe Pharmacy at 918 Maple St.

Neighbors living near 118 Grand St., told police they saw Miller and a man get out of her vehicle about 8 p.m. and enter the house. The witnesses, who were sitting on their front porch, never saw anyone leave. Neither did they hear any screams or sounds of a struggle.

Lee, the social worker, drew a composite sketch of the suspect based on the descriptions he got from the tavern patrons.

The man who identified himself as Clark never was seen in the Burlington area again.

An editorial in The Hawk Eye two weeks after the killing echoed the feelings of state and local law enforcement officers:

“The enormity of the crime is matched only by the cunning of the killer. … He left virtually no clues. But he did leave enough so that he will be found; but only by work as clever and methodical and painstaking ­— time consuming ­— as his own.”

Law enforcement officers familiar with the case won’t say publicly they have given up hope. But they admit with so many years having passed, it becomes less likely the killing will be resolved.

“Would I like to say ‘yes, we can solve her killing?' Sure, I would like to be able to say that,” Klein said. “But the reality is, it’s been a long time. …This case is never going to be closed. It will always be with every person who works in this department.”

A copy of local newspaper coverage is part of the evidence on file in a cold case of the murder of Burlington real estate agent Dorothy Miller. The murder took place in 1969 and is the oldest unsolved case in Burlington.

A paper with the signature of FBI Director J. Edgar Hoover is part of the evidence on file from the murder file of Burlington real estate agent Dorothy Miller. The murder took place in 1969 and is the oldest unsolved case in Burlington.

Burlington police Lt. Jeff Klein opens the box of evidence July 22 from the 1969 murder of Burlington real estate agent Dorothy Miller. The murder took place in 1969 and is the oldest unsolved case in Burlington.