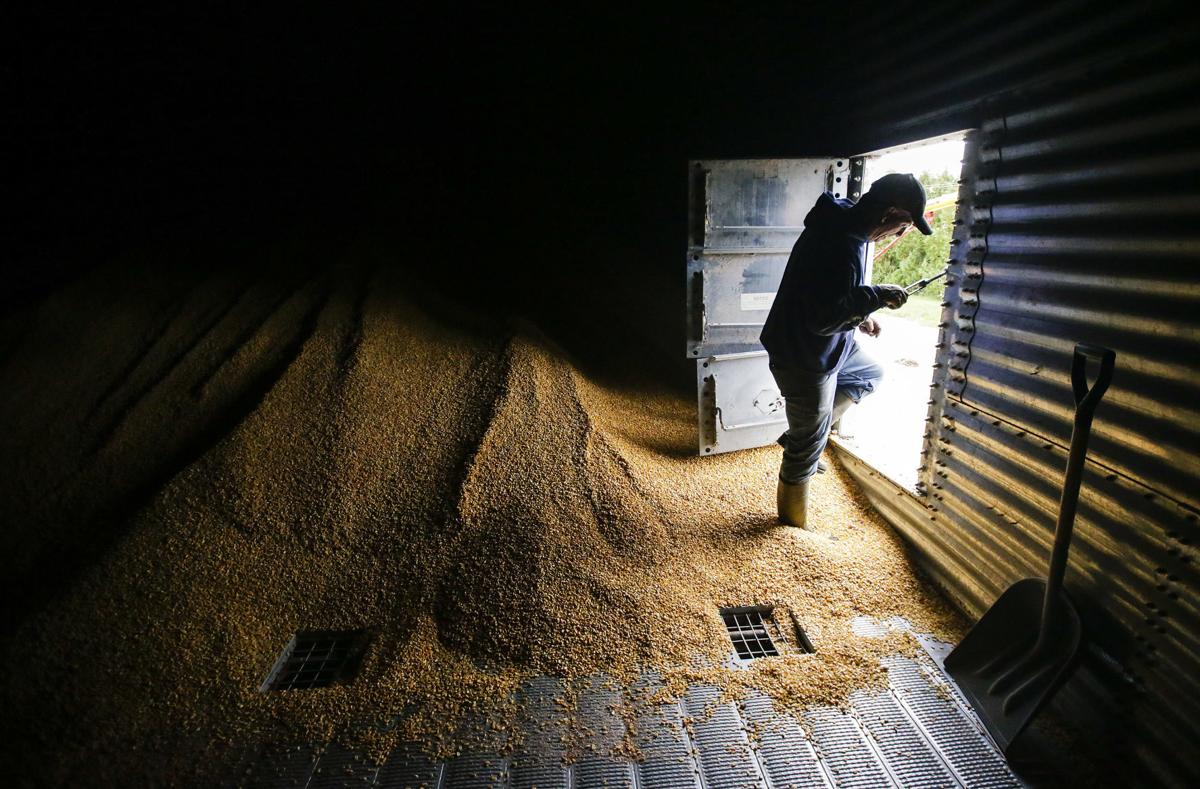 Lance Lillibridge walks out of a grain bin storing corn from the last harvest at his farm in rural Vinton, Iowa on Thursday, Oct. 3, 2019. Lillibridge uses the wet and rainy conditions to do maintenance on his equipment as well as working to empty the last 60,000 bushels of corn from the bin. 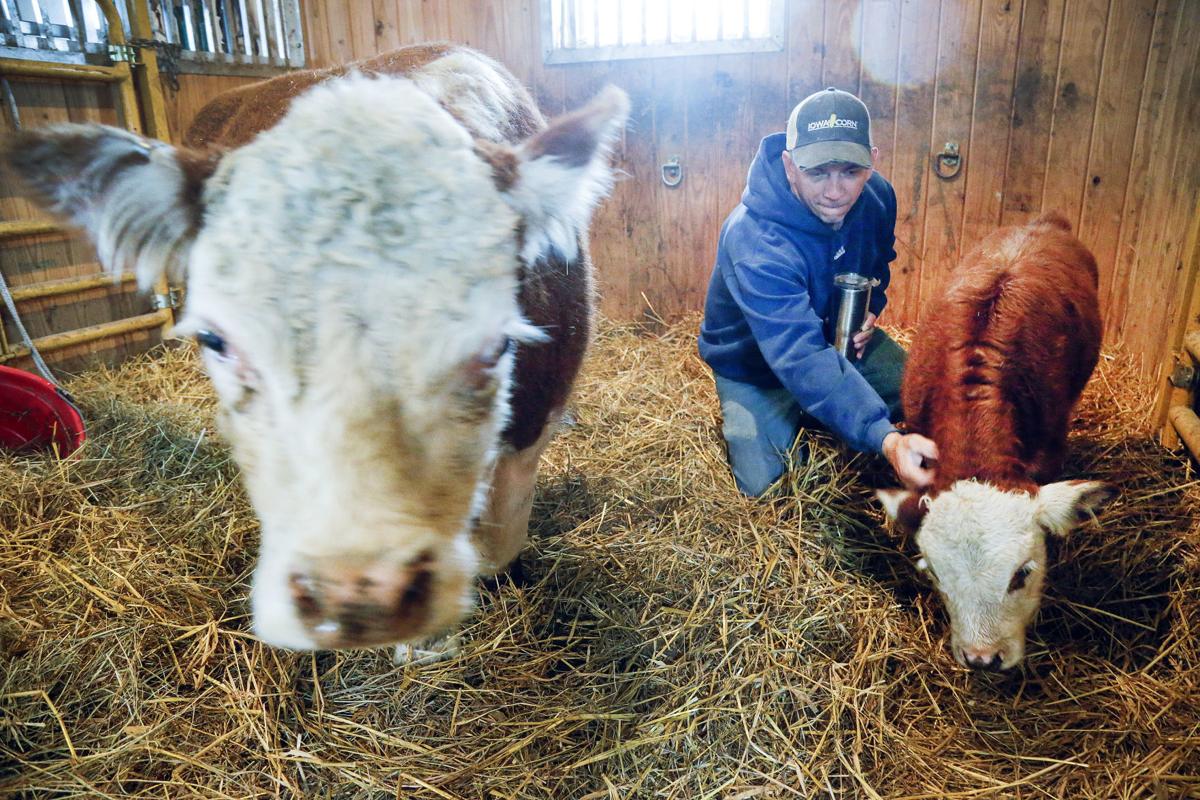 Lance Lillibridge checks on a miniature Hereford calf DeeDee (right) as DeeDee's mother Sadie stands close by at his farm in rural Vinton, Iowa on Thursday, Oct. 3, 2019. Lillibridge uses the wet and rainy conditions to do maintenance on his equipment as well as working to empty the last 60,000 bushels of corn from one of his bins.

DES MOINES — Harvest usually is an upbeat time for Iowa farmers such as Lance Lillibridge of Vinton. But this fall, maybe not so much.

For many farmers, the anticipation and bounty that goes with the culmination of another growing season is dampened by anxiety, angst and anger brought on by uncertainty over trade, biofuels, commodity prices and ever-present weather concerns. It’s a plateful of tough issues that are prompting some to even rethink their futures in agriculture.

“We’ve got a farm economy that could be unleashed and just (be) crazy good,” Lillibridge said, “but we’ve got leaders in our government that are keeping that from happening.

“It’s very frustrating, and that’s a bipartisan frustration, too. It’s not one side or the other.”

Lillibridge’s operation consists of 1,200 acres and another 700 “custom farm” acres of corn, soybeans and alfalfa along with a small herd of Red Angus cattle.

“Every harvest season there are unknowns and a lot of anxiety,” he noted. But this year, the trade, tariff and renewable fuel issues mixed with a delayed and disrupted growing season “gives everybody kind of a little bit of an upset stomach.”

In North Iowa, that agricultural unease is around as well.

According to Trae Hestness from the Cerro Gordo County branch of the Iowa Farm Bureau Federation, what started off as a bad year has continued to be awkward year.

"We’ve had a depressed grain market, a short-planting spring and a hot and dry August," Hestness said. There's a hope that farmers that marketed the grain well are going to come out okay but not a total guarantee.

Which comes with the territory of being a farmer.

"Farmers are always the eternal optimism where they plant a seed in the spring and hope to make money in the fall. You always have that worry and that anxiety," Hestness shared.

Northwood farmer Melissa Moretz, who works with her husband, agreed.

"I think you have to be an optimist to farm but I do think it’s beginning to wear on a lot of farmers though. They are really struggling and I do think there some people potentially considering getting out," Moretz said.

U.S. Department of Agriculture estimates issued in September projected lower corn and soybean production this year even though average yield estimates were relatively unchanged. Fall corn prices have hovered below $4 per bushel while soybeans have topped the $9 per bushel mark. That means some farmers are operating at or below the cost of production depending on the yields they take from the fields.

“This isn’t anything like the 1980s,” when Iowa struggled through a devastating farm-credit crisis, “but we do have a big fraction of our farm output that is not operating at a profit. It’s operating at a loss,” said Iowa State University economist David Swenson.

“Farmers can’t continue to do that. So it does create stress and it does create the probability that more of those operations are going to go under,” Swenson said. “That doesn’t mean that we’re going to lose that productivity from the land because somebody is going to turn right around and buy that land right back up and put it into production or keep it in production. But we do have that stress.”

Farmers have seen tougher financial years, said Chad Hart, ISU associate economics professor in the Center for Agricultural and Rural Development. But this year has been exacerbated by years of overproduction, market erosion tied to the Trump administration’s tariff war with China, oil refinery waivers that have thrown Iowa’s biofuels industry into chaos and uncertainty over crop development and maturity.

“It’s like playing ‘Let’s Make A Deal’ and we’re waiting to see what’s revealed behind door No. 2,” Hart said. “There’s just a heck of a lot of anxiety hanging in the agricultural realm this year,” he said, that has been brought on by “a slow grind as opposed to a sharp hit.”

Swenson said farmers have taken “twin beatings” brought on by the tariff war with China and the Renewable Fuel Standard waivers for oil refineries, although he noted some of that was offset by government payments to Iowa farmers hurt by the trade dispute with more trade adjustment aid expected.

However, he said, all that has created “a tremendous amount of uncertainty” for farmers with harvest conditions posing another “wild card” in areas where spring planting was delayed because of floods.

“As we sit right now, I would say that most farmers are about three quarters anxious and one quarter hopeful,” Swenson said.

For that anxiety, Hestness said that Iowa Farm Bureau Federation has tried to work on offering help and resources for mental health issues that arise in agricultural communities.

"We’ve been trying to push that if farmers have anxiety issues or need someone to talk to, there’s always the Farmers Help Line."

Farmers did get two sparks of good news earlier this month.

First, the Trump administration announced a U.S. trade agreement with Japan that will benefit agriculture exports.

And on Friday, the administration announced it would increase the requirements for blending biofuels into gasoline and diesel, an attempt to make up for the waivers it has granted small refineries. But an oil industry angry over the cost of compliance, said it would take legal action.

Hopes also are riding on congressional approval of a pact with Mexico and Canada that could spur agricultural markets, but farm leaders in Iowa worry as commodity prices hover below the cost of production that it will take years to

“These are difficult times for Iowa farmers, particularly soybean farmers,” said Kirk Leeds, chief executive officer of the Iowa Soybean Association. “It’s kind of a perfect storm of things that have come together to cause soybean prices to collapse. And probably as troubling if not more troubling is that the short-term and even the midterm outlook isn’t particularly positive. We’ve got a lot of soybeans, we’ve got a trade war, we’ve got African swine fever (overseas) and we’ve got a competitor (in South America) that is getting millions and millions of dollars poured into it from China.”

Lillibridge likened the situation facing farmers to an all-star football team ready to take the field, but the players are told to hold back and not do their best.

“That’s how we feel right now, that we’re being held back,” he said.

Industry experts and economists say current conditions are forcing farmers to look for ways to cut costs, put off purchases, take off-farm jobs to make ends meet, downsize operations or find new cash crops like industrial hemp to stay in business as their equity and investments shrink. For some, it may come down to deciding whether to stay in business altogether.

“I don’t think there’s any doubt that we’re going lose farmers — that’s been going on for a long time, but I think we’re going to see acceleration,” Leeds said.

“I don’t know if we’re there yet but there is a growing concern that we’re going to lose a generation of farmers — from people who just throw in the towel because this is eating away at their equity, their assets to the younger farmers, the sons and daughters who will no longer have room to come back to farm and probably like the ’80s will be discouraged from coming back to the farm,” he said. “I think there’s that fear.”

“The mood is extremely grim,” said Heley Lehman, who raises corn, soybeans, oats and hay in both organic and conventional rotations on his Polk County family farm. “There’s just a ton of uncertainty, economic uncertainty and agronomic uncertainty. If we have an early frost, it would be really devastating to people who are already having a lot of economic stress.”

‘POSITIVES ON THE HORIZON’

Farm incomes have fallen from where they were five to 10 years ago, Hart noted.

“It is rough out there, but it’s not the 1980s crisis, either,” when credit issues forced many farmers out of business, he noted. “We’re not seeing a tidal wave of movement there. In the 1980s, you had a bunch of folks who had to make that decision whether to stay in or exit the business. This year we’re seeing those numbers slowly pick up, but they are picking up. We have seen more requests for mediation — that’s a sign that there’s financial struggles on the farm.”

While there are pressures, Swenson said, it’s not all “gloom and doom.” Some signs suggest that export demand for U.S. commodities could increase next year and farm prices could recover.

“They’ve got some positives on the horizon and it could very well be that next year is going to look significantly better,” he said.

Lillibridge said the crops look “OK” in his area, but grain producers will get “the true story” once combines begin to roll and they can assess how “insect pressure,” wet spots during spring planting or other growing-season issues may have affected yields.

He said some soybean producers who have been able to get an early start on harvest report yields not as good as what they had last year.

During a stop at a North Iowa farm on Tuesday morning, Governor Kim Reynolds offered signs of encouragement for farmers while chastising Congressional stalling.

The Iowa Medical Cannabidiol Board will consider changes to the state’s medical marijuana program this week, which include the addition of more qualifying conditions and a recommendation to remove the 3 percent THC cap and replace it with a purchase limit.

French President Macron: No blank checks will be given

Millions in US face eviction amid COVID-19 crisis

Millions in US face eviction amid COVID-19 crisis

Lance Lillibridge walks out of a grain bin storing corn from the last harvest at his farm in rural Vinton, Iowa on Thursday, Oct. 3, 2019. Lillibridge uses the wet and rainy conditions to do maintenance on his equipment as well as working to empty the last 60,000 bushels of corn from the bin.

Lance Lillibridge checks on a miniature Hereford calf DeeDee (right) as DeeDee's mother Sadie stands close by at his farm in rural Vinton, Iowa on Thursday, Oct. 3, 2019. Lillibridge uses the wet and rainy conditions to do maintenance on his equipment as well as working to empty the last 60,000 bushels of corn from one of his bins.