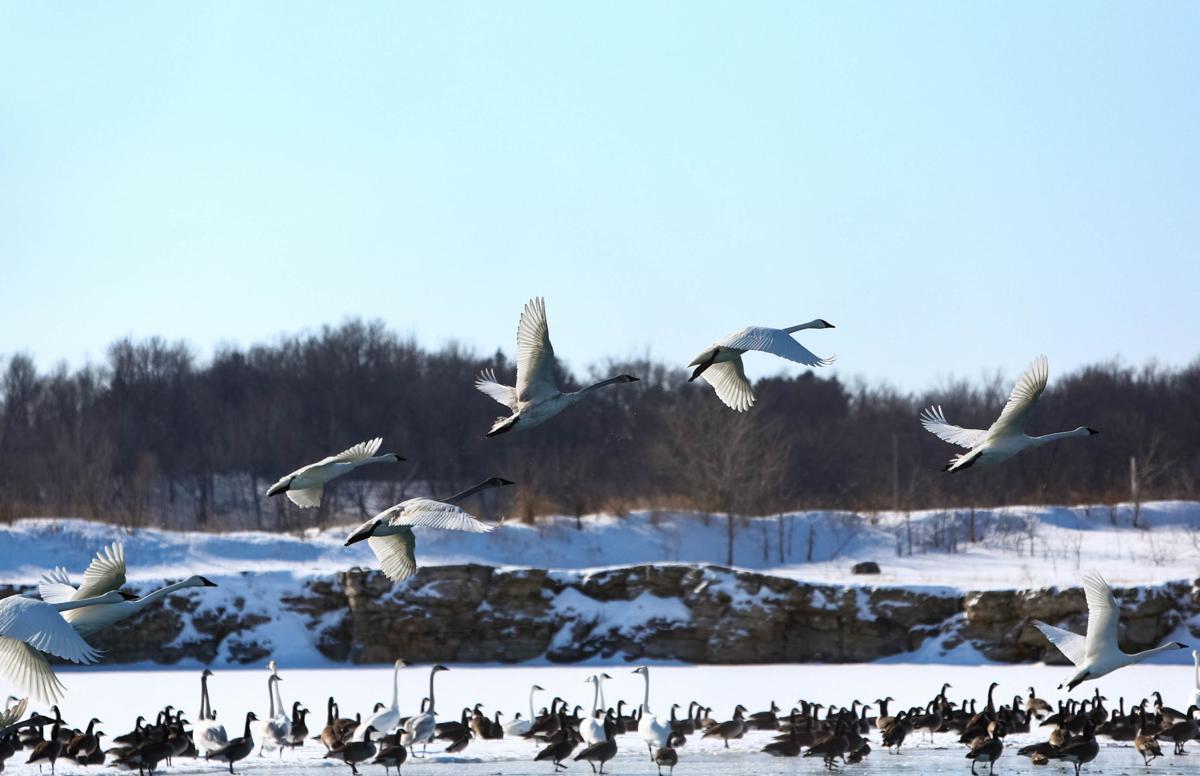 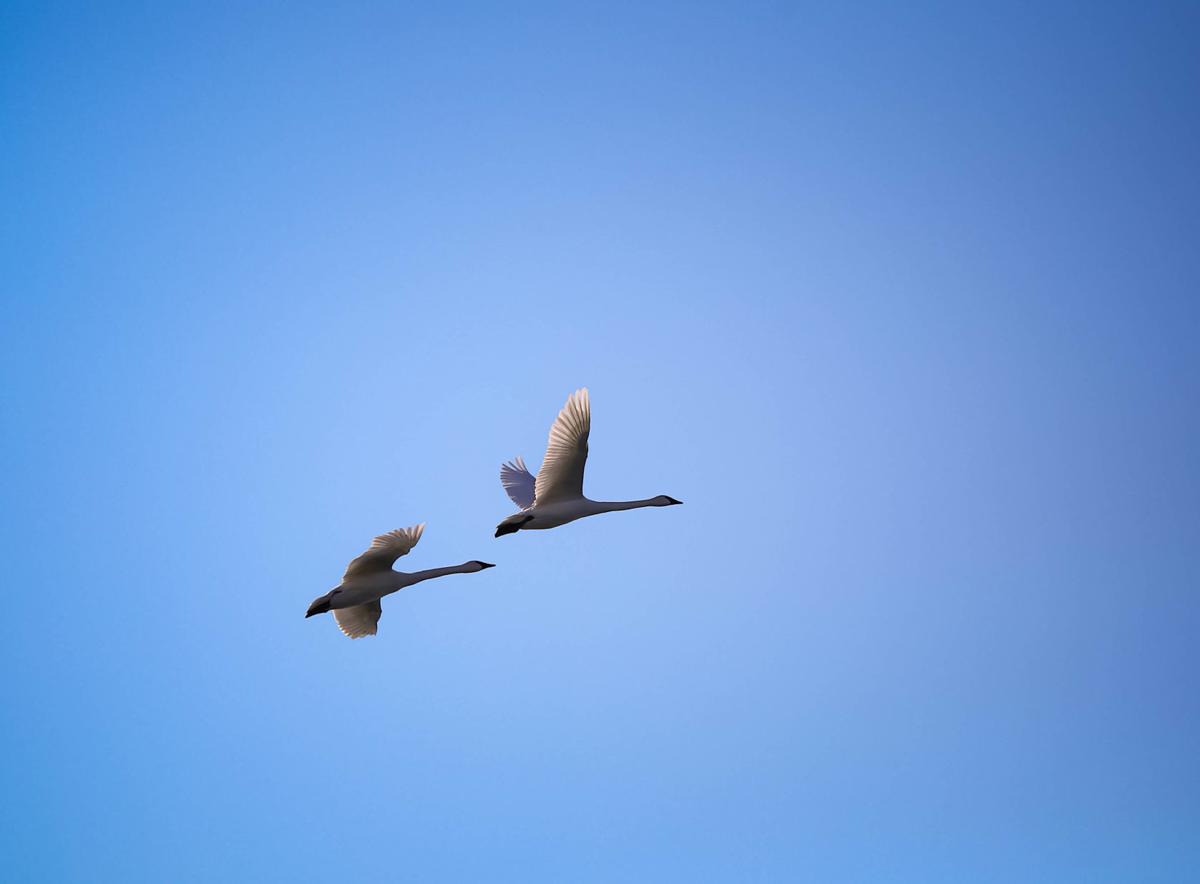 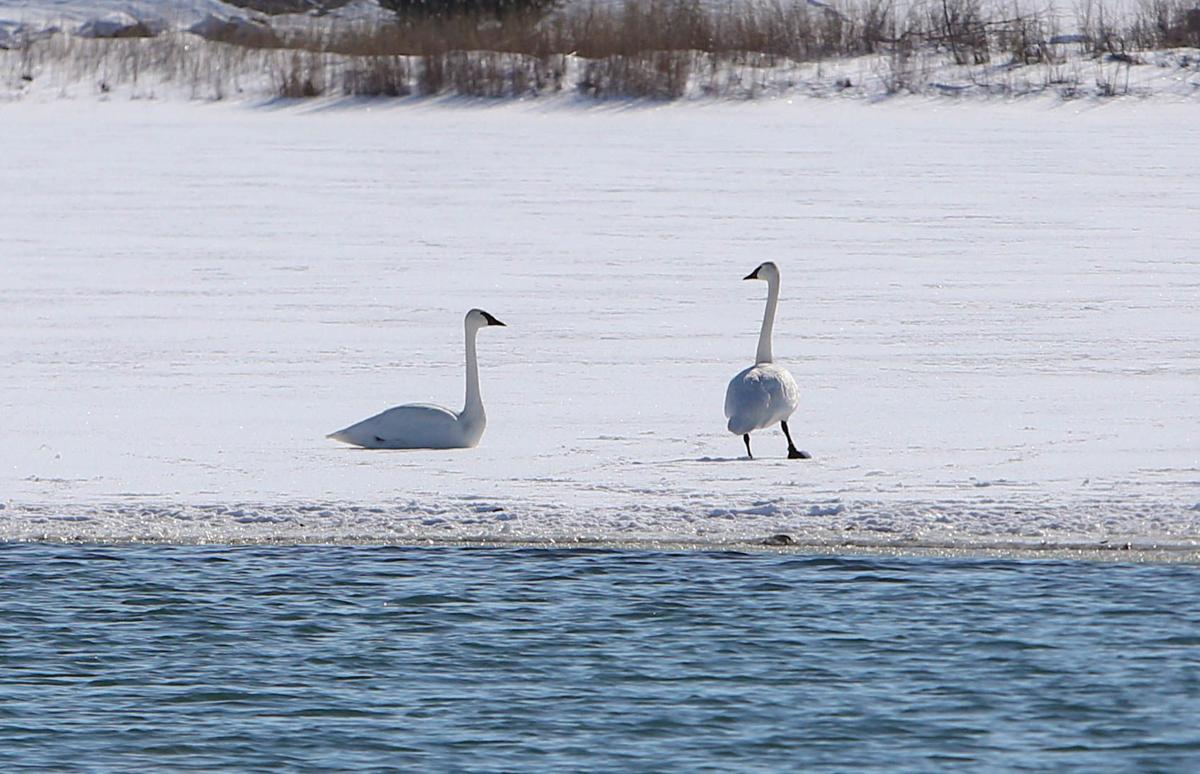 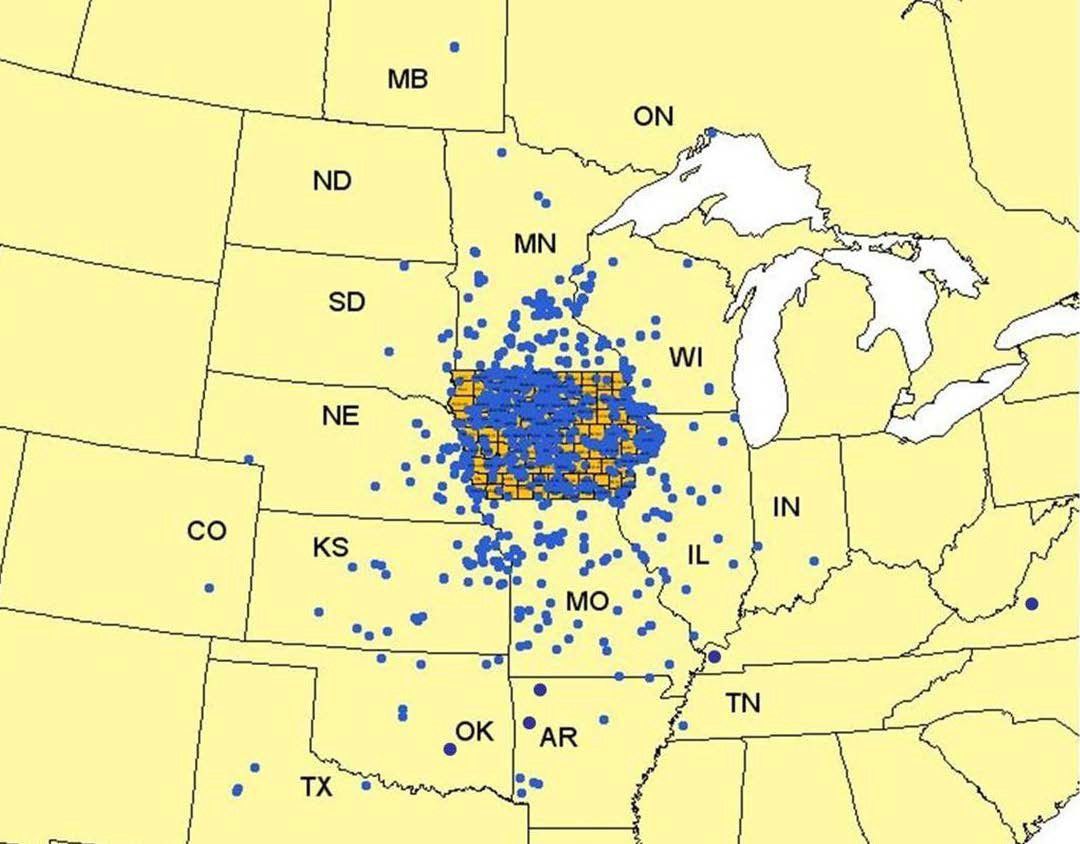 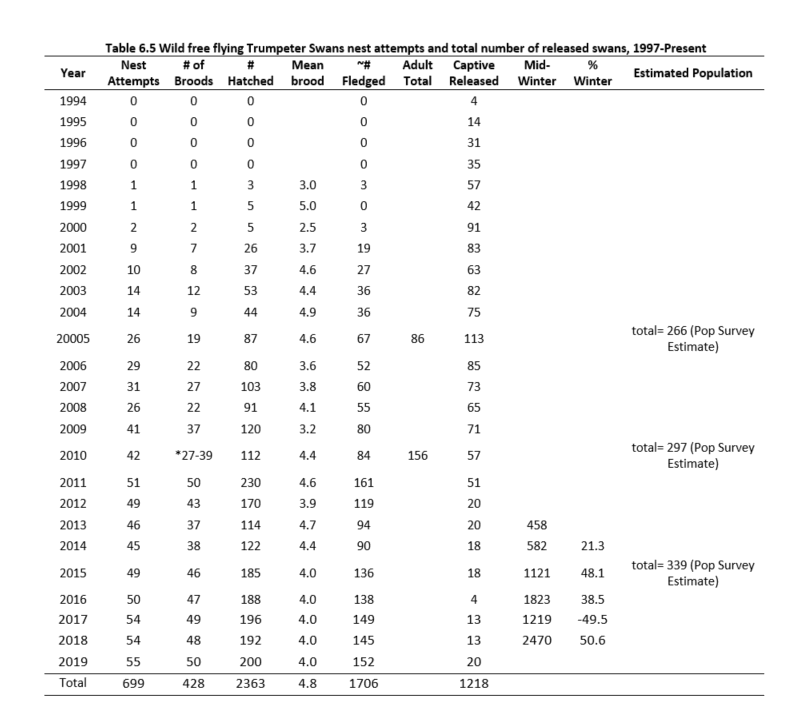 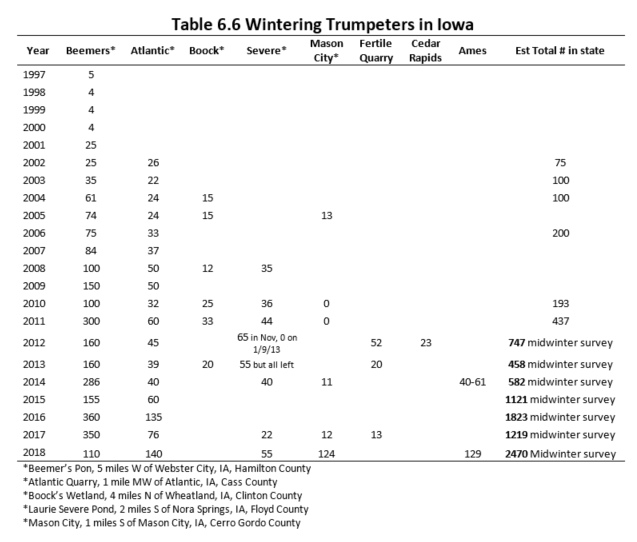 A trumpeter swan soars through the sky, its wings outstretched and backlit by the sun, rendered iridescent. It descends and skids onto a shallow pool of wetland waters.

The only swan native to Iowa, and North America's largest waterfowl, trumpeter swans had occupied this continent by the thousands for centuries.

But as European settlers continued their move westward and into Iowa during the 1800s, and in the midst of unregulated market hunting and the extensive loss of wetland habitats, trumpeter swans were virtually wiped off the map in a matter of decades.

They were killed for skin, for meat, for feathers. Their dense feathers in particular were used for quills, hats, powder puffs; for down jackets, down comforters and mattresses.

David Hoffman, a wildlife research technician with the Iowa Department of Natural Resources, says that for settlers looking for their next meals, trumpeter swans would have been an easy choice.

“You think of our forefathers settling the prairie; where did they get their food? Did they go to Hy-Vee or Fareway?” he said. “So they went out with limited bullets … and with limited powder and bullets, are you going to shoot a one-pound duck, or are you going to shoot a 28- to 32-pound swan that not only puts food on the table, but money in your pocket, if you’re going to sell for powder puffs or feathers?”

This more convenient option, however, wasn’t an option with longevity.

The last pair of wild nesting trumpeter swans in Iowa occurred in 1883 on the Twin Lakes Wildlife Area, southwest of Belmond in Hancock County.

Following that, the birds were completely extirpated from Iowa; they would remain absent for over a century.

In 1993, the Iowa Department of Natural Resources developed a plan to bring trumpeter swans back to Iowa. The plan sought to achieve two objectives: first, re-establish a self-sustaining migratory population to its former nesting range in Iowa, and secondly, “trumpet the cause for wetlands” by creating opportunities, like public swan releases, to educate people on both trumpeter swans and the value of healthy wetlands. 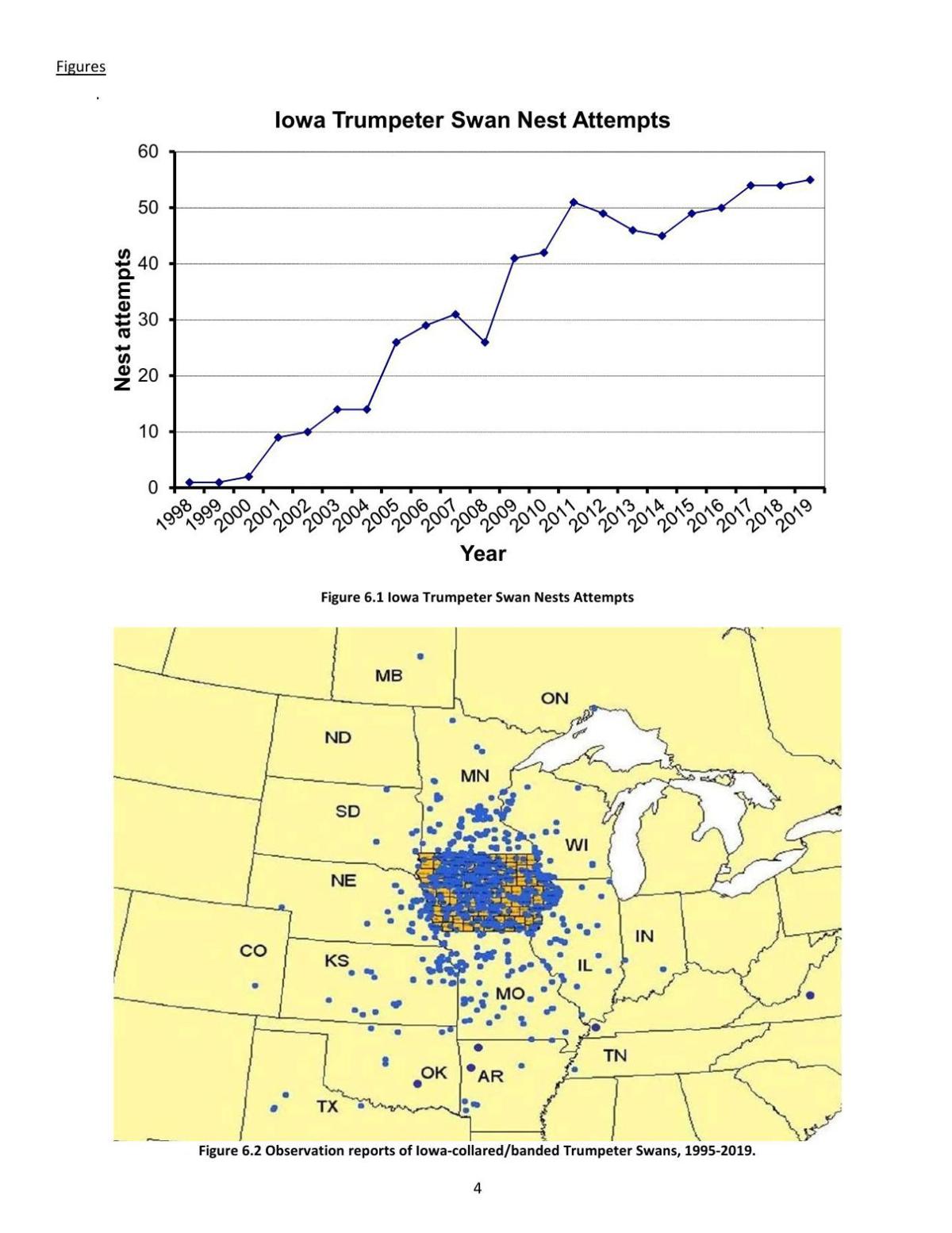 “It’s actually the people of Iowa who are responsible for bringing them back (to the state),” Hoffman said. “People donated their time and money, and there’s been over $1.75 million of in-kind and soft match money contributed to help bring trumpeters back.”

Those funds have been used to cover the costs of feed, vet care, nesting site preparations, equipment and purchasing swans.

In 2000, a second pair nested on a Winnebago County Conservation Board wetland (Russ Tract at Thorpe Park), 8 miles west of Forest City.

From that first nest in 1998, trumpeter swans’ numbers have been on a slow and steady incline: Iowa had 55 nesting pairs last year, and there are currently 18 active breeding pair sites around the state. Since that first hatch in 1998, 699 known trumpeter swan nests have occurred in Iowa.

“Here in the 5-county area that surrounds Mason City has the highest nesting density in the state,” Hoffman said.

“We also receive swans in from about 10 zoos around the country that donate their cygnets,” Hoffman said. “So those cygnets that are raised in captivity here in Iowa are from zoos, like Blank Park Zoo, for example, then those cygnets are the ones that get released out in the wild.”

Many of the swans in captivity have been injured in the wild and weren’t able to return, so they’re used for breeding to grow the population. A total of 71 wild, free-flying trumpeter swans have been captured, banded and released in Iowa since 1997.

Twenty trumpeter swans were released in Iowa in 2019, making for a total of 1,218 trumpeters released to date.

If you build it, they will come

Trumpeter swans depend on wetlands with good water quality.

They typically do well in shallow, knee-deep waters, and their diets consist of aquatic plants like tubers. They fancy duckweed, a small plant that floats on the water’s surface, as well as arrowhead (also known as duck potatoes), a bitter tuber about the size of a marble. They eat insects, invertebrates, but rarely proteins like fish. They’ve also been witnessed adapting to what resources are most readily available: some have been seen eating leftover grain, rice and soybeans across the country.

Trumpeter swans can thrive if they have access to enough quality habitat. But in Iowa, the most physically altered state in the nation, that hasn’t been easy to come by; 98% of what once were wetlands in Iowa have been erased.

“That’s a really big part of the demise — loss of habitat,” Hoffman said. “Wetlands are critical for our water quality and trumpeter swans here in Iowa.”

Wetlands’ futures remain in flux. In January, the Trump administration ended federal protection for many of the nation’s millions of miles of waterways, including wetlands, leaving many ecosystems nationwide vulnerable to pollution and development projects.

Meanwhile, Gov. Kim Reynolds has been discussing her plan for the Invest in Iowa Act, which would channel a portion of Iowa sales tax funds to improve water quality, conservation and outdoor recreation.

“Any habitat loss is going to be detrimental, not only to the animals, but also to our water quality here in the state,” said Hoffman.

Humans can stand to benefit from quality wetland habitats as well. They filter pollutants from water – like Mother Nature’s kidneys, Hoffman says – and they take in water like a sponge, which helps mitigate flooding.

Nearly 75% of released trumpeter swans die before they reach breeding age, and many of these deaths have been the result of human activity. To date, over 400 Iowa trumpeter swan mortalities have occurred: 193 from lead poisoning (55 in the fall and winter of 2017-2018 alone), 177 from power line collisions, 48 to disease and 13 to apparent malnutrition. 72 have been poached by violators.

Trumpeter swans are still considered endangered in some states, Hoffman says, and their status is protected in Iowa; shooting one is illegal and could cost you $1,500. In one case, a $17,000 fine was charged to four men in connection with a family group of Iowa swans shot in Texas.

“’If you build it they will come’ actually works for trumpeters as well,” Hoffman said, quoting the famous line from the Iowa-based film “Field of Dreams.” “There’s been an effort to restore habitat through government programs like the Wetlands Reserve Program, and they’re really important for our water quality in the state.

“What’s neat to see is the efforts people have done to restore habitat,” said Hoffman, listing a handful of people in the area who have already done so, and that it was “amazing” to see the “tremendous effort … people have done to bring these trumpeters back.”

So, what would a healthy trumpeter swan population look like?

“We’re actually developing a management plan to figure that out with a population model,” Hoffman said. “We’re trying to come up with an estimate on sustainable numbers. We’ll actually know more in 3 or 4 months, when they get that model going.

Hoffman said there are a number of ways for the public to get involved. People can participate in habitat conservation programs, like the Wetlands Reserve Program, Ducks Unlimited or Pheasants Forever.

In partnership with the Trumpeter Swan Society and filmmaker Steve Harryman, a forthcoming documentary called “Return of Trumpeters” is set to be released in 2022.

Return Of The Trumpeters - Movie Trailer from Steve Harryman on Vimeo.

Birdwatchers can see a good number of wild swans near Fertile. They start leaving mid- to end of February, as winter snow and ice begins to melt, so you’ll have just a couple weeks to see them. Clear Creek is open at any time, and there’s a webcam on site, so people can watch from afar, too.

There are also ways to track trumpeter swans online. One collared swan at https://trumpeterswan.netlify.com/locations.html has been tracked near Fertile recently. Other North Central Iowa swans can be tracked at https://www.nrem.iastate.edu/track-trumpeter.

When it comes to the trumpeter swan’s future, it seems recovery is just beyond the horizon — so long as they continue to have access to the conditions they need to thrive.

“That support is critical to supporting and preserving remaining wetlands that are continually under threat,” Hoffman said.

Washburn: For Iowa birdlife, winter weather is no picnic

Sub-zero temperatures. Drifting snow. Winds gusting to forty-five. Near zero visibility. How’s that for a chilling winter combo? But those wer…

The public is invited to attend the annual Trumpeter Swan Soiree to celebrate North America's waterfowl species at Walnut Woods State Park on Sat., Feb. 15 from 11 a.m. to 1:30 p.m. The event is kid- and family-friendly!

Iowa’s prairie wetlands are one of our richest natural treasures. Wetlands benefit everyone. They store runoff and reduce downstream flooding.…

Stay in tune with the land you live on. These are some of our environmentally-related stories from winter of 2019-2020.

The Clear Lake CSD School Board released the Clear Creek secure entry and Lions Field Complex projects out for bid during the school board meeting Thursday evening.

Bills would give more time to punish pedophiles

Iowa lags behind other states when it comes to aiding childhood victims of sexual abuse by adults — oftentimes family members, teachers, clergy or other close associates, according to experts.

Light snow and mixed precipitation is anticipated across northern Iowa this afternoon, according to the National Weather Service.

DES MOINES — Mark Smith was chosen Saturday to lead the Iowa Democrats at a time of significant turmoil for the party.

A 22-year employee of the Iowa Department of Transportation will serve as the agency’s director.

Amazon founder Jeff Bezos said Monday that he plans to spend $10 billion of his own fortune to help fight climate change.

The Harding Masonic Lodge will host a chili cook-off on Saturday in Mason City.

“We are not just dollars signs. We are real people. A real community,” Candi Evans of Golf View Mobile Home Park at North Liberty told the subcommittee.

Tax levies generally expected to decrease for next fiscal year

The tax levies for Forest City, Winnebago County and Hancock County are generally expected to decrease from the previous fiscal year due to an increase in property valuations.

A couple weeks ago, the Summit-Tribune reported on the Rice Lake Golf Course asking the Winnebago Co. Supervisors for assistance in reducing its property taxes. Here is a Q&A with the golf course's board president.

Sandhill cranes — most commonly found in northeast Iowa — are monogamous birds who dance and throw sticks to entice their mates.

Lucky goose gets a second chance thanks to some helpful humans 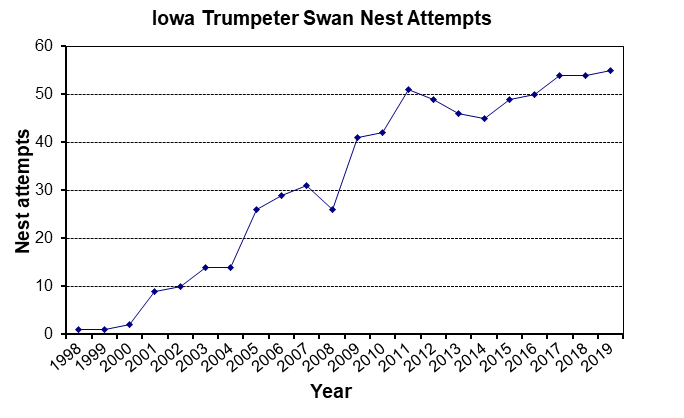