When people who have worked with or been around Rosetta Waychus are asked about the longtime director of Cerro Gordo County Veterans Affairs, a few words and phrases dominate the conversation: Kind but fiercely dedicated to what she does. Knowledgeable. Passionate. A problem solver.

In one of the more effusive bits of praise for the 24-year Air Force vet, the North Iowa Marine Corps League's Ernie Martinez called Waychus a "godsend" to veterans. Reflecting on what Waychus retiring next month would mean for Veterans Affairs, Martinez was clear: "This is going to be a big loss for us."

Not bad for someone who got into Veterans Affairs in part because she felt like a "fish out of water" after leaving the Air Force in 1999.

Waychus missed the camaraderie and service that a military environment can cultivate and a job in Veterans Affairs offered that along with a chance for advocacy.

And though training for work in Veterans Affairs isn't as intensive as basic military training it isn't a cinch, either.

"(It's) very strenuous training," Waychus said. "First I worked with the person I was replacing for two months … And then I went to a week school, day and night. They give you lots of books to train and learn," she said. But as with any kind of training, no one is ever fully prepared for real world demands.

"They send you to school but you’ve got to get your hands dirty," Waychus said.

For Waychus that meant cutting through tangles of red tape, progressing through mounds of paperwork, just maneuvering through the sometimes labyrinthine VA system.

"Sometimes the hardest time is just convincing to keep fighting. Don’t give up. Don’t back down. Stay the course," Waychus said. And that kind of motivation could pay off. "When a veteran could win a claim, it meant so much to them. It validated them. It gave them so much."

The North Iowa Marine Corps League's Bill Clark has felt that kind of validation from the work Waychus has done.

Clark, a Vietnam vet, tried for years to get into the VA system in part because of his concerns about Agent Orange exposure during the war which has been linked to various forms of cancer as well as diabetes and Parkinson's disease. When Clark was told to take his problems to Waychus, he did. And he got results.

"My wife and I went down to the courthouse in Mason City and met with Rosetta and within 20 minutes I had an appointment in Des Moines for a screening for Agent Orange," Clark said. It took Waychus 20 minutes after it had taken Clark years of trying.

That kind of swift, immediate and effective approach left such an impression on Clark that he said he's referred at least a dozen of his friends to Waychus since he first met with her. According to Clark, a lot of those folks have called him back and thanked him for recommending Waychus. The praise is multi-directional.

In fact, she helped Martinez's World War II veteran father get adequate care so that he could continue living with Martinez as comfortably as possible.

Roger Hunt, who served in the Marine Corps in the late 1950s, said he had hearing problems he needed addressed with the VA and Waychus sorted them out in no time at all.

"I’ve had so many successes with her that it’s pretty hard to sort them out," Hunt said.

Not that praise or plaudits is the driving factor for why Waychus does what she does.

"Rosetta is not one to speak on her accomplishments and what she’s done," her colleague Lauren Heuberger said. She'll celebrate a win in the moment for one of her veterans but won't go around talking strangers ears off about it. As Heuberger said, she'll work long hours and still find time to bake a Coca Cola cake for her coworkers and remain passionate about all of it because she's gotten to do something she wants to do.

"I don’t know what she’s going to do without a job to go to," Heuberger said, a sentiment that a number of veterans shared. They weren't sure what Waychus would do or what the job would be like without her in it.

Even Waychus admitted she isn't certain how she'll continue to help veterans once she leaves her post.

What she's far more certain of is why she stuck around for so long. Why she made veterans her life's work.

"The goal of the VA is to provide high quality health care and in order to do that you have to have continuous improvement."

"Again, it’s the veterans here that are going to suffer this. Not just us."

After a spring without high school sports, things are looking up for Iowa fans.

Work on the Highway 122 construction project in Clear Lake is nearly complete.

GOP primary for 2nd Congressional District predicted to be close

The June 2 Republican primary election for Iowa's 2nd Congressional District by all accounts, is predicted to be a close one.

Keep an eye on your local weather conditions: severe thunderstorms and a few tornadoes are possible across northern and central Iowa this afternoon.

Watch Now: When was the first Presidential Debate?

Watch Now: When was the first Presidential Debate? 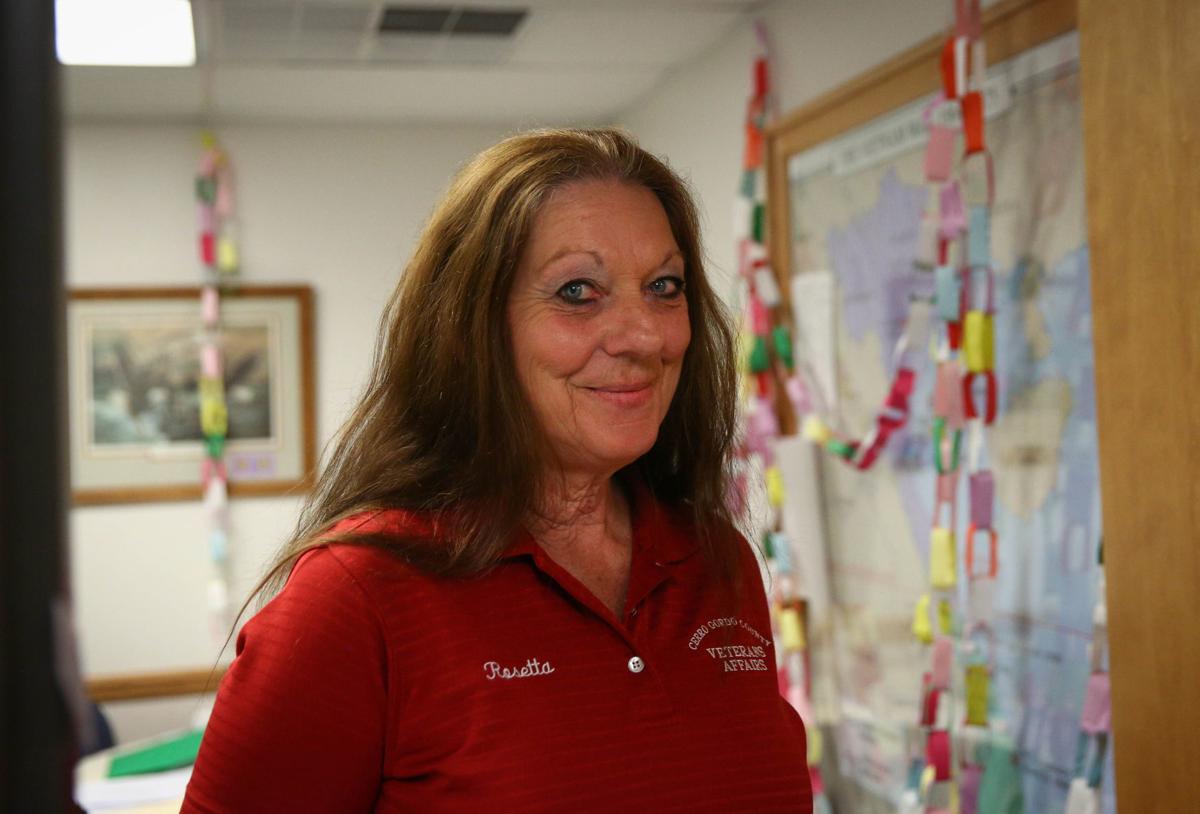 Rosetta Waychus stands in the doorway off her office at Veterans Affairs in the Cerro Gordo County Courthouse. The construction-paper chain hanging on her wall was a countdown project started nearly a year ago, with a new link added each day. 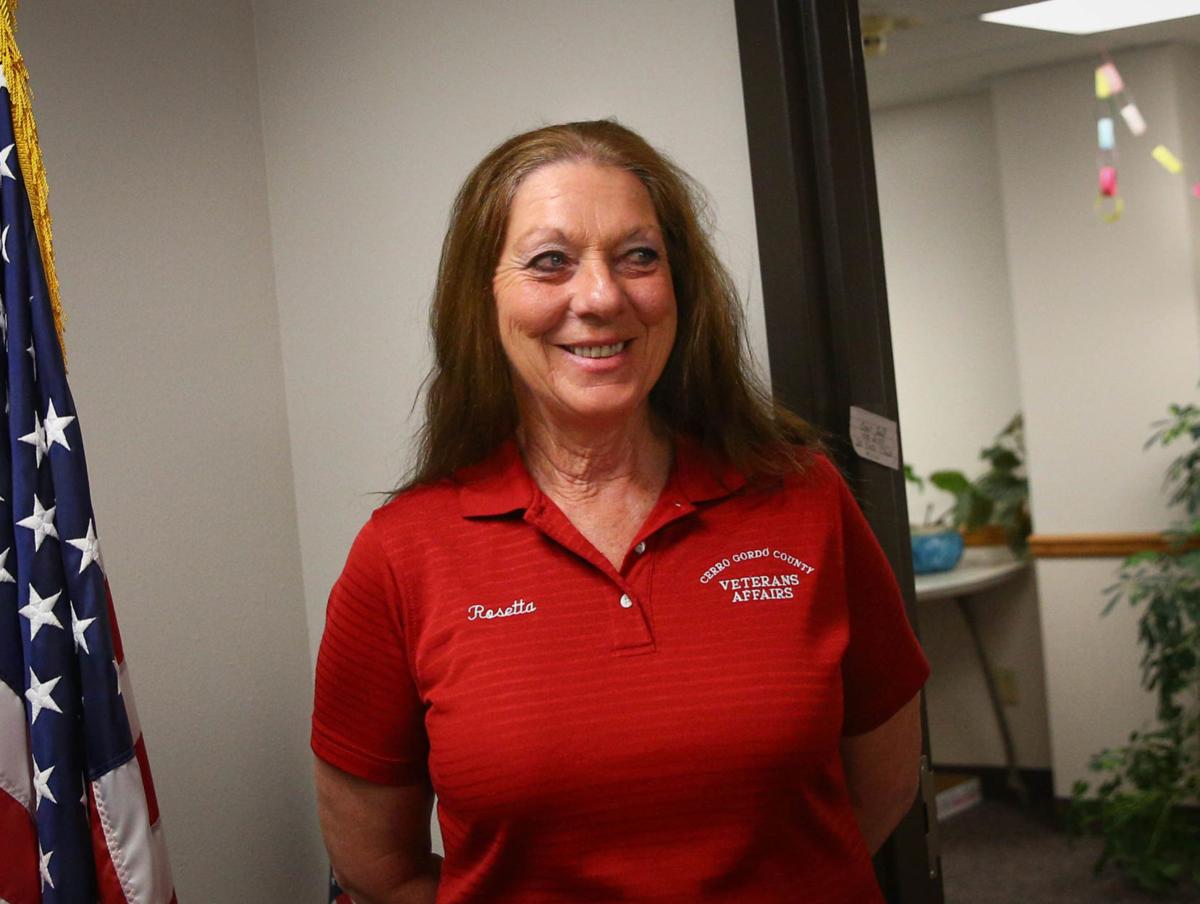 Rosetta Waychus jokes with her co-workers at Veterans Affairs in the Cerro Gordo County Courthouse. Waychus will retire in June.