Motorists may notice some changes to the Buddy Holly Place railroad crossing south of Highway 18 in Clear Lake this fall.

That comes after the Clear Lake City Council unanimously approved a crossing safety improvements agreement with the Iowa Department of Transportation, or Iowa DOT, for the crossing and set the date to receive competitive quotes for its portion of the project last week.

The project received federal funding from the highway-railroad crossing safety program, which promotes public safety at rail crossings and near rail lines throughout the state, in fiscal year 2019.

“Those are competitive funds based primarily on safety-related issues, things like accidents and so forth,” said Scott Flory, Clear Lake city administrator, last week. “There’s a long waiting list for these funds, so we got moved up on the list, and fortunately, we’re going to get some funding here.”

In October 2018, the city approved an agreement with the Iowa DOT and the Dakota, Minnesota & Eastern Railroad for the funding.

Currently, the crossing at Buddy Holly Place has signals but not gate arms, but the Iowa DOT and Dakota, Minnesota & Eastern Railroad have determined the crossing would be safer if it had new signals and gate arms. 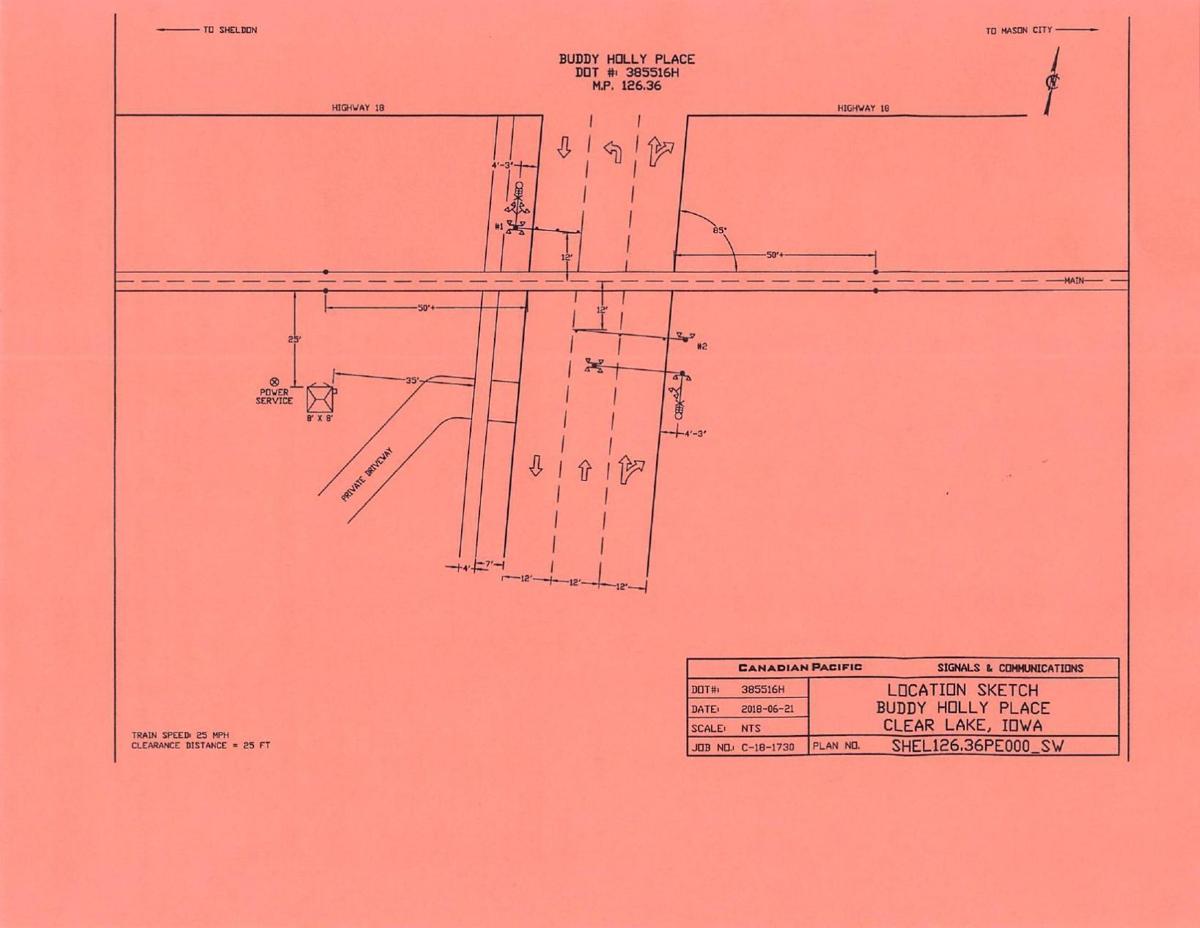 Initially, the city thought it’d be able to maintain its four-lane configuration south of Highway 18, Flory explained to the council, but after the railroad company completed its preliminary engineering, it was determined the intersection would have to be modified to comply with federal regulations.

“The reason for that was they’re not able to get a gate arm to meet their standards that would cover three lanes,” Flory said. “They can do two lanes, so we backtracked and did a little redesigning on that.”

To meet the federal regulations, the city will reduce the number of vehicle lanes from four to three on Buddy Holly Place south of Highway 18, combining the northbound and eastern right-turn lane.

Jason Petersburg, project engineer with Veenstra & Kimm, said he reviewed the state’s turning maneuver traffic count record at the intersection, and the left-turn, straight and right-turn maneuvers were “pretty much equivalent” during the peak hours.

“We are comfortable eliminating the lane here and not reducing the level of service overall within the intersection, specifically the northbound traffic,” he said by teleconference during the meeting.

The intersection will be “very similar” to North Eighth Street and Highway 18 intersection, Flory said. 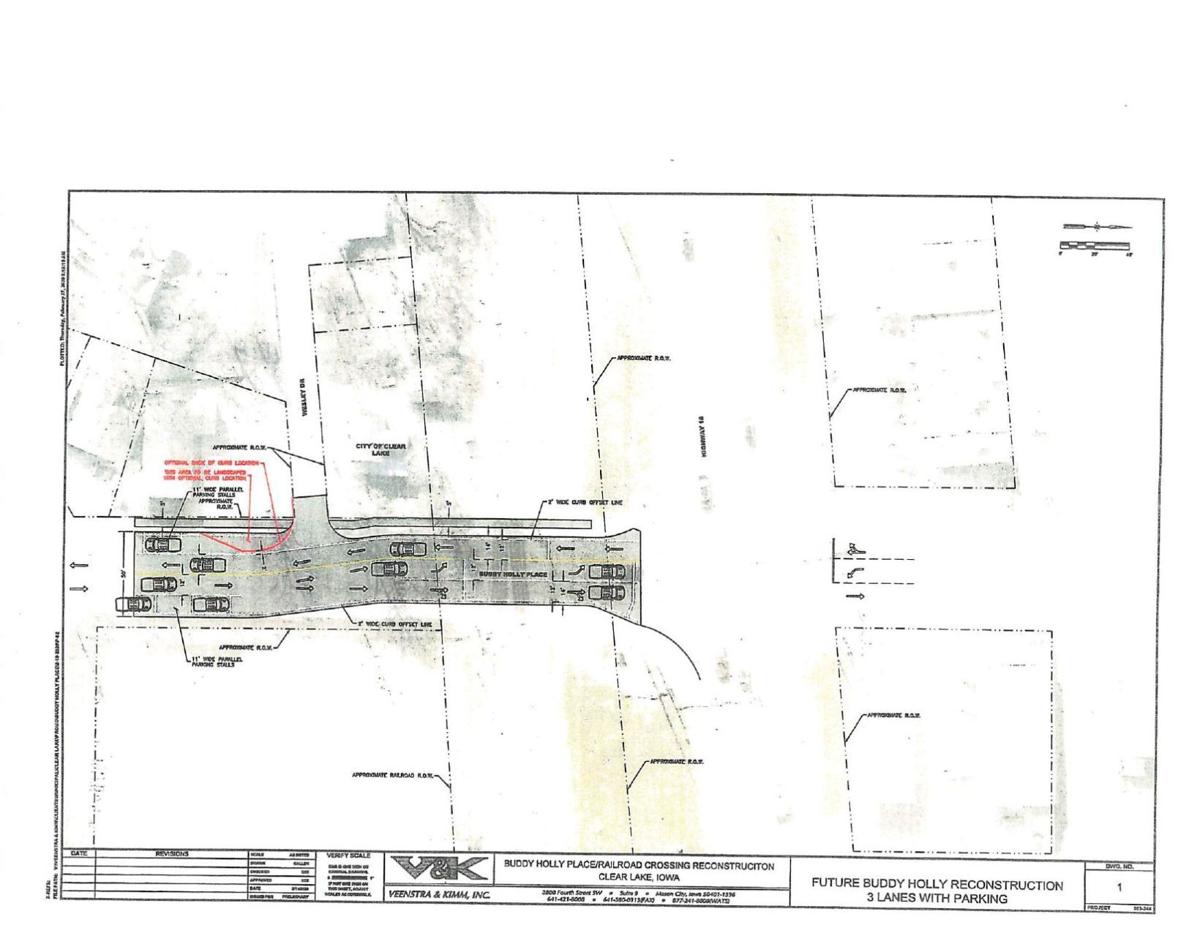 Additional improvements by the city consist of narrowing Buddy Holly Place by removing the eastern right-turn lane and installing new curb and gutter, re-striping the roadway to delineate the three-lane configuration and modifying the existing traffic signals at the Buddy Holly Place and Highway 18 intersection so they’re interconnected with the new railroad signals.

The estimated cost of the city’s portion of the project, including the construction, signal modifications and interconnection, pavement markings and engineering, is $155,165, but Flory said Clear Lake is eligible for 100% reimbursement from the Iowa DOT.

Competitive quotes for the city’s roadway modifications are due by 11 a.m. Thursday.

The Clear Lake City Council is scheduled to award the project Monday during its meeting.

Flory said the signal modifications and interconnection will be done through a separate contract.

Clear Lake’s portion of the project is scheduled to begin in late September and be completed by mid-November.

The Dakota, Minnesota & Eastern Railroad’s portion of the project is estimated to cost about $301,607, and it may take place yet this fall or next spring.

The railroad company will be reimbursed for 90% of the project by the Iowa DOT, according to the agreement.

Flory anticipates that once the upgraded signals and gates and roadway modifications are completed that the railroad surface crossing will be completed within a relatively short period of time.

The city has an application and cost-share commitment to the Iowa DOT for the surface-crossing improvements.

“If you’ve been on that one lately that one’s a little bit on the rough side, so again, hopefully in a couple years that will be improved and we’ll have a whole new gates, crossing, signals and it’ll be much safer,” Flory said.

The truck was dragged about 10 to 15 yards down the track before coming to rest against a power pole. No one was injured in the collision.

A $3 million economic development project that would relocate a business out of rural Cerro Gordo County has been proposed in Clear Lake.

The city of Clear Lake has solidified its partnership with the Clear Lake Community School District to build, operate and finance the wellness center.

Iowa Republicans hailed his return as they fight to re-elect President Donald Trump and U.S. Sen. Joni Ernst, but Democrats called Terry Branstad’s surprise decision to step down as U.S. ambassador to China in time to hit the fall campaign trail a sign of GOP desperation.

State employees who enroll in the government’s 2021 health insurance plan will pay higher monthly premiums — an increase that State Treasurer  Fitzgerald said should not be happening given the COVID-19 fallout facing Iowa families.

Tuesday morning marked a busy day for the Cerro Gordo County Board of Supervisors. 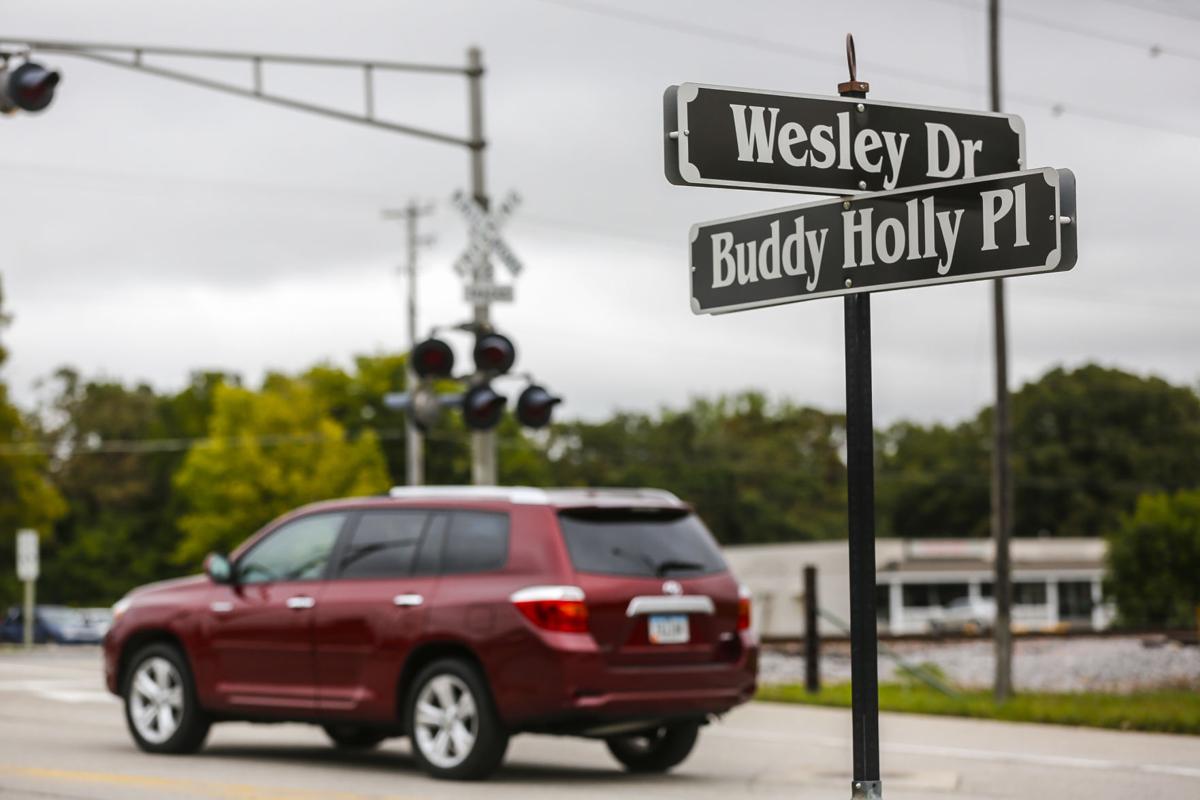 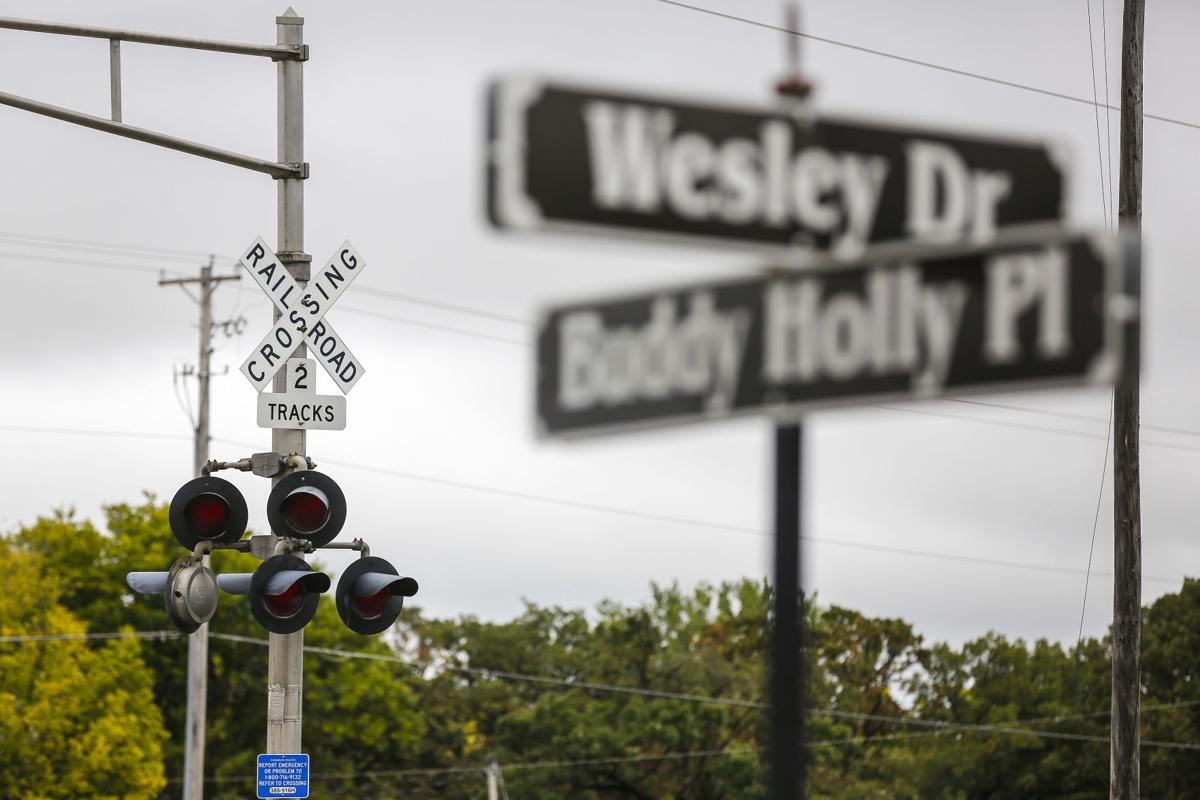