A Clear Lake family that moved to Georgia earlier this month has been reunited with its cat.

That’s thanks to a local trucker who traveled 1,850 miles in his semitractor-trailer to deliver it.

“I don’t know what I could possibly say to fully express what it meant (to our family),” said Matt Welter, a former Clear Lake resident. “Just the type of compassion and human decency he showed toward a stranger is good ol’ fashioned Clear Lake values.”

Welter and his wife, Tiffany, and three of their four children moved to Peachtree City, Georgia, from Clear Lake on Aug. 6 for a job opportunity.

Tiffany Welter, a human resources manager at Eaton Corp. in Belmond, was recently transferred to a facility in Georgia — months before the one is slated to close in North Iowa.

Three days before the Welters moved, their 3-year-old male short-haired tabby Franklin got spooked by the movers and lodged himself above the basement ceiling.

The family spent hours trying to retrieve the cat to no avail.

“We did all we could aside from cutting a hole in the ceiling to get him out,” Welter said.

The Welters, already an hour and a half behind schedule for a reservation, decided to leave for Georgia in hopes of seeing their cat again.

Franklin is one of the family’s three tabby cats, Matt said, noting that he is his wife’s rescue.

Forest is Matt’s and the third is with his oldest son, a freshman who decided to stay in Clear Lake with his mother to finish high school.

Because Matt’s mother planned to spend the next couple days in Clear Lake cleaning their house, the Welters tried to find someone with a live trap.

Within hours, someone who lived nearby placed a baited live trap at the house, and the next morning, Franklin was caught.

However, when the couple found it’d cost more than $2,000 to have Franklin transported from Clear Lake to Georgia, they knew they had to consider other options.

“We couldn’t afford that,” he said. “We love him and all, but we just moved across the country, so we thought the next best thing was to find him another loving home.”

The family shared Franklin’s story on Facebook and asked if anyone would be willing to take him in.

Matt said he received four or five private messages from individuals interested in rehoming their cat before he received the one that changed his family’s life.

Travis Anderson, of Clear Lake, had seen the family’s Facebook post after he returned home from delivering a load, and although he didn’t know the family, he wanted to help.

“They were in a bind and there was no other way he’d get back to them,” he said. “I didn’t want to see it go to the shelter, and if worse came to worst, I was going to take the cat.”

Anderson, who had the opportunity to deliver a load to the Dallas/Fort Worth International Airport the following week, reached out to the Welters on Aug. 5.

Matt described Anderson’s offer as a “long-shot opportunity” that would allow his family to keep Franklin.

“We thought he was a member of extended family that was no longer going to be with us,” he said. “All our options had been exhausted, and then, this happened.”

Anderson, a 20-year trucker and cat lover, picked up Franklin from the Welters’ Clear Lake home and took care of him until the two left for Texas.

He said Franklin was pretty shy at first, but it didn’t take him long to warm up to Anderson.

Anderson and Franklin departed for their 1,850-mile, three-day voyage on Aug. 9.

“He was a good little boy,” Anderson said. “He got to see quite a bit of country; more than most people get to see.”

Franklin especially liked watching the airplanes take off from the airport, he added.

The day after arriving in Dallas, the two left for Knoxville, Tennessee, where Anderson planned to meet Matt on Aug. 11.

Matt drove more than three and a half hours to meet Anderson, but he said it was the least he could do, given how far Anderson had traveled.

Once he got to Knoxville, Matt placed Franklin in a kennel to prevent another “Houdini act,” and that’s where he remained until they safely arrived in Peachtree City.

Once he arrived home with Franklin, his family — including its cat, Forest — was more than happy to see him.

Matt said he and his family are eternally grateful to all of the people who made keeping Franklin a possibility, especially Anderson.

”Through this situation, I became a quick believer that there’s a lot of good out there still,” he said. “We thought everything was dark, and the headlights of an 18-wheeler lit it up for us.”

In August, Ashley Stewart reported on the family of Matt and Tiffany Welter, who got to be reunited with their lost cat after moving to Georgia.

The Clear Lake Community School District has spent almost all of its coronavirus relief bill funding.

Plans are underway to expand Pampered Pets in Kanawha after spending just three years in its current building.

The Clear Lake Board of Education will hold a special session at 5:30 p.m. Tuesday.

Mayors press Trump to act on aid for homeowners

More than once, President Donald Trump told Iowa federal, state and locals elected officials Tuesday that more help will be coming for individuals and households hurt by last week's derecho, carving a $4 billion-and-counting path of damage.

An Iowa county said Tuesday that a clinic failed to report up to 3,000 negative coronavirus test results.

The River City was one of 10 cities in the United Sates and the only city in Iowa to be a runner up for the "All-America City Award."

A second person has died from injuries sustained in a boat crash on the Mississippi River on Sunday.

Father of man killed at his son's funeral says the shooting was accidental, not murder

Jamie Shorter sobbed Wednesday as he held his cell phone and tried to talk about the horror he saw on the first day of August.

The Iowa City public school district and a statewide public educators union is suing Gov. Kim Reynolds’ administration over a state requirement that schools conduct a majority of instruction in-person amid the coronavirus pandemic.

On August 28, 1955, Emmett Till, a Black 14-year-old from Chicago was lynched near Money, Mississippi, after being falsely accused of offendin…

A Clear Lake man will continue representing Iowa soybean farmers and the industry.

What's the deal with the Rockwell phone booth?

Back in the days when as many 2.7 million pay phones dotted the American landscape, this stalwart of Rockwell had functionality. It was needed.

The Forest City Chamber of Commerce and Forest City Connect came together to put on a meet and greet event for people in the area to come together, meet new people and get more involved in the community.

The Arts Center is coming to the people.

The Clear Lake City Council approved the purchase of a 2020 cab and chassis to replace an ambulance involved in a crash this summer. 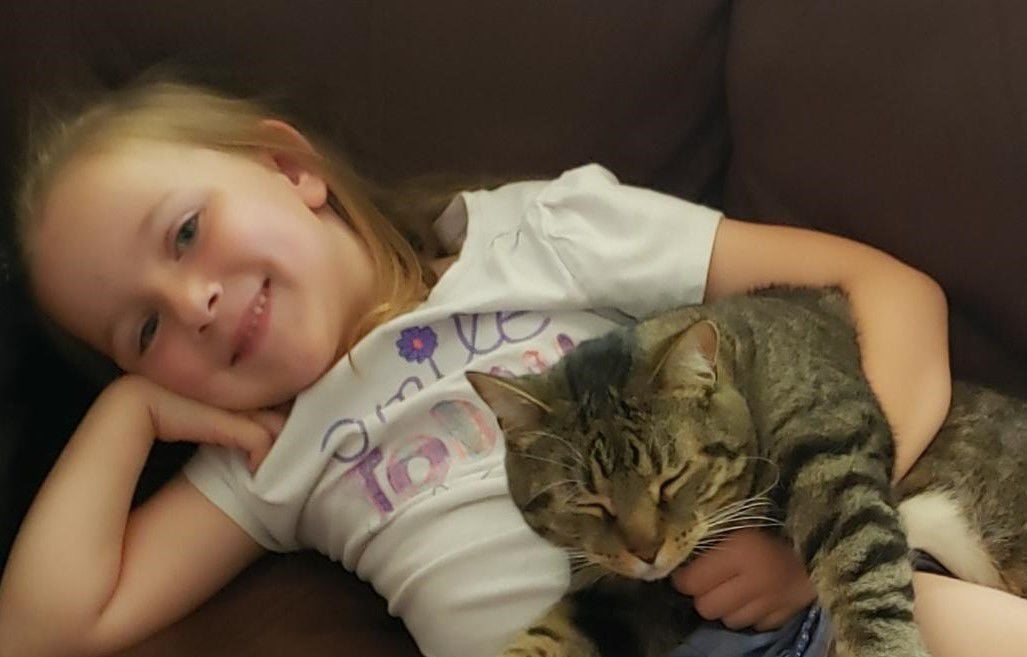 Franklin, right, with 6-year-old Tinley Welter, the cat whisperer. Welter and her family moved from Clear Lake to Georgia earlier this month and were recently reunited with their cat.

Matt and Tiffany Welter with their four children the night before they moved from Clear Lake to Peachtree City, Georgia. The family moved Aug. 6. 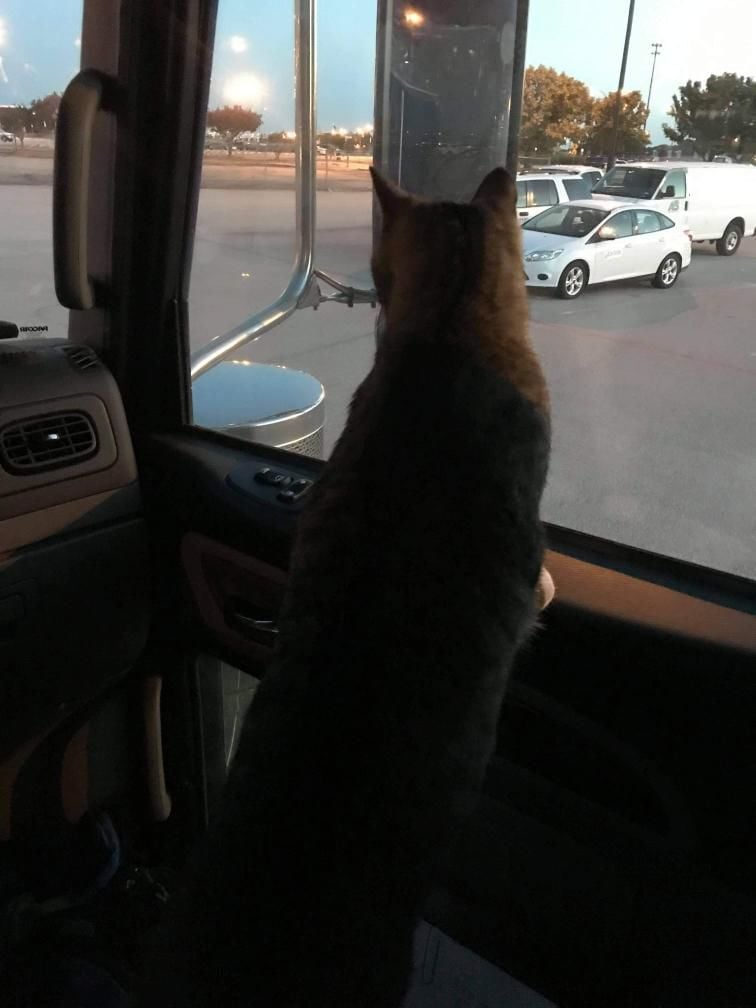 The Welter family's 3-year-old cat Franklin watched airplanes at the Dallas/Fort Worth International Airport from the passenger seat of Travis Anderson's tractor-trailer earlier this month. Anderson transported Franklin to Knoxville, Tennessee, where he was reunited with his family. 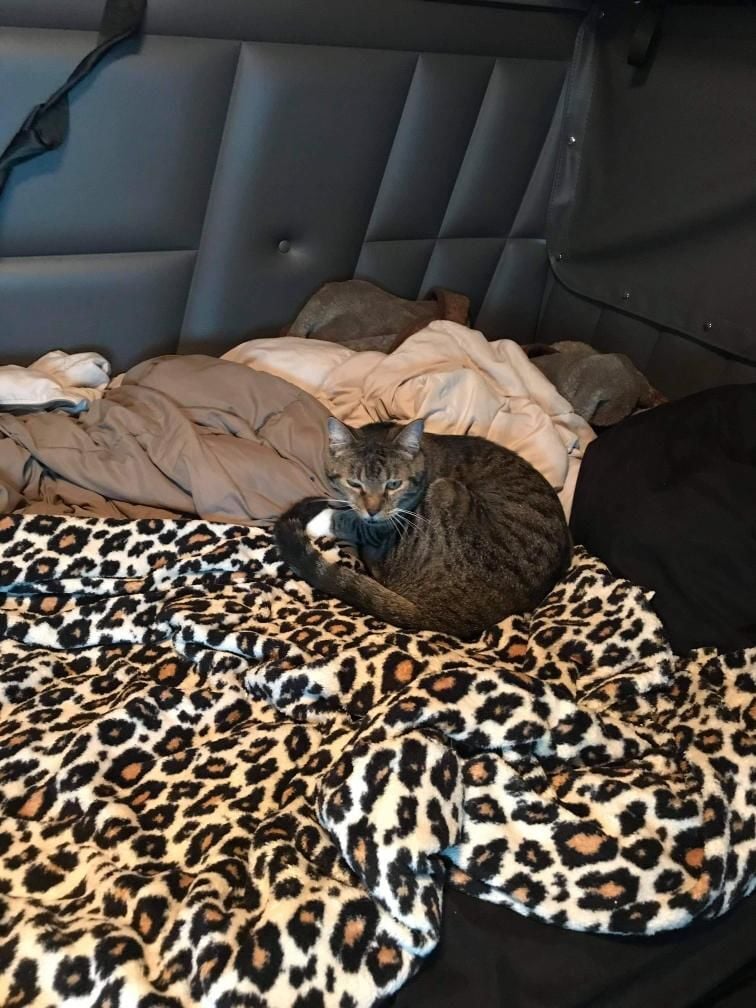 Franklin sleeping in Travis Anderson's tractor-trailer earlier this month. Anderson transported Franklin to Knoxville, Tennessee, where he was reunited with his family.