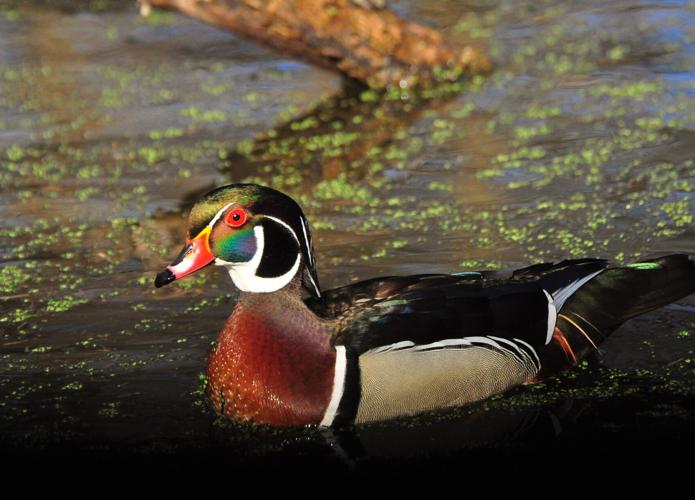 A drake wood duck with its elegantly crested head and kaleidoscope plumage. 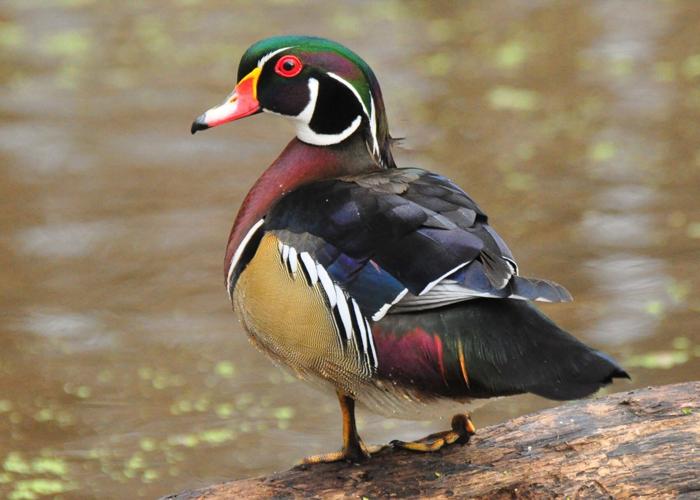 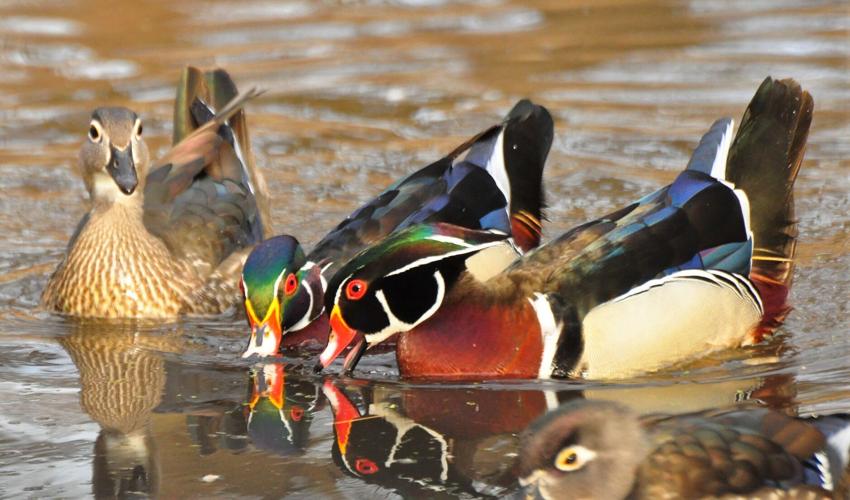 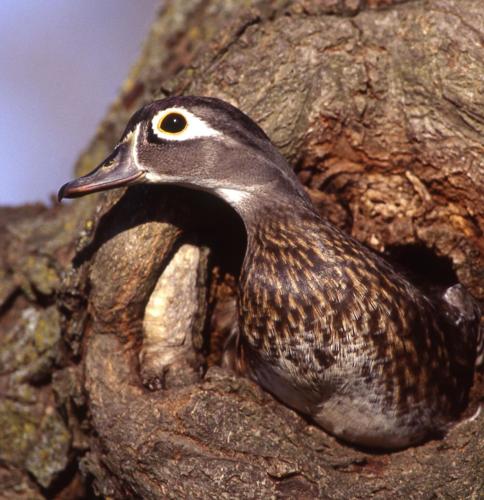 Wood ducks have the very unduck-like habit of nesting in elevated tree cavities. 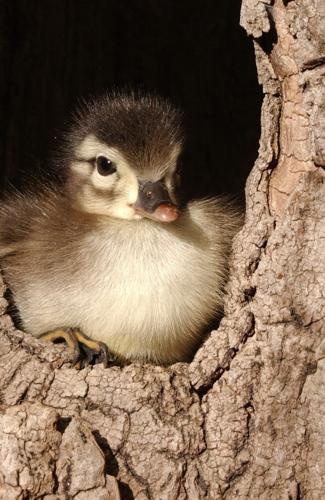 Once a clutch of eggs hatches, the hen calls her young from the nest. Hopping to the cavity entrance, the ducklings do not hesitate to jump no matter how high the nest. Once the brood is assembled on the ground, the hen leads them to water. 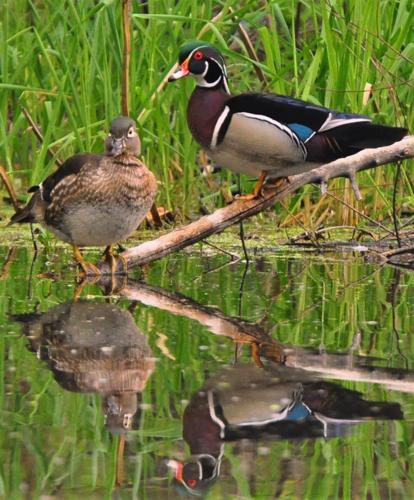 A pair of wood ducks enjoy their wetland surroundings. 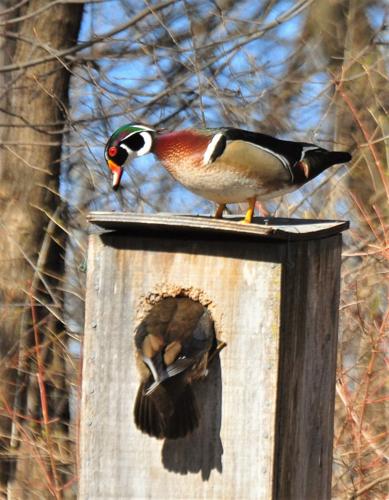 The wood duck is one of the Mississippi Flyway’s -- and Iowa’s -- most recreationally important waterfowl. This fact is especially true for me. During the course of a year, I spend more time hunting, observing, photographing and working with wood ducks than any other single species.

In addition to its elegantly crested head and kaleidoscope plumage, the colorful wood duck is unique from other waterfowl in many ways. Instead of communicating in familiar duck-like quacks, woodies converse through a wide range of sounds that vary from penetrating screeches, to softly spoken mews, grunts and whistles. Although I can’t site any studies to back the claim, I think wood ducks may have the most developed vocabulary of any duck.

While most ducks are graceful in the air but rather clumsy on the ground, wood ducks remain agile whether on land, sea, or air. On the ground, they can run like pheasants. When foraging through the timber for grapes or late summer acorns, they can rapidly move along skinny tree branches with all the ease of a circus wire walker.

Another rather unique feature is the woodie’s unduck-like habit of nesting in elevated natural tree cavities – some as high as 50 or 60 feet above the forest floor. While the adaptation is effective, it is also dangerous. When the nests of "normal" grassland nesting ducks are raided by raccoons, skunks, and 'possums, the eggs are lost but the hen almost always escapes.

By contrast, when a marauding raccoon discovers a cavity nesting wood duck, there is often no avenue of escape, resulting in the loss of both hen and eggs. The danger is illustrated by the fact that female wood ducks are subject to the highest nesting mortality of any of our duck species. But those hens that lose nests but manage to survive the attack are the most persistent re-nesters of any waterfowl.

Nest losses can be at least partially offset by erecting safe, predator-proof nest boxes. Back in the 1970s, Cerro Gordo County Conservation Board Director Ben Van Gundy and I had a couple of extra wood duck nest boxes that we installed at Mallard Marsh the first week of July.

We didn’t expect the boxes to be used that late in the season but thought the installations would give us a head start on the next year’s nesting season. While sprucing up a number of already established boxes the following March, I decided to make sure the wood chip bedding in the two new boxes was still in good order.

Much to my amazement, I discovered a complete clutch of hatched wood duck eggshells in one of the boxes. Even if a hen would have started laying eggs in the new box the same week it was installed, the ducklings wouldn’t have hatched until at least mid-August – nearly three months past peak nesting. That was one persistent hen, and her final attempt had finally paid off.

Mix the sugar water and fill the backyard feeders. The fall migration of ruby-throated hummingbirds is underway. For those wishing to obtain e…

Iowa’s small game hunting seasons are just around the corner.

Iowa’s special teal seasons are the best single change in waterfowl regulations in the past 50 years.

“There was nothing to see but prairie, green stretches of grassland rolling quietly outward ‘till lost in the haze that trembled on the horizon.”

Following decades of silence, Iowa’s most secretive reptiles are currently emitting radio signals from the watery depths of Eagle Lake.

I was staking out – and hoping to photograph – an active nest of red-bellied woodpeckers.

With this year’s mulberry crop reaching full maturity, it’s time to grab your bucket and head for the woods.

Washburn: Stay away from 'orphaned' birds and bunnies

As predictable as lengthening days and summer heat, phone calls regarding “orphaned” wildlife are streaming in.

Washburn: Chuck is a better neighbor than you'd think

I must admit that I was a bit apprehensive when I learned that Chuck had moved into the neighborhood.

The spring songbird migration is winging northward. And while the larger and more colorful species – such as tanagers, orioles, and grosbeaks …

Washburn: Spring turkey harvest down from 2020

Washburn: Don't count your turkey until it's in the oven

Washburn: Domestic Cats: cuddly pets or vicious killers? Or both?

Clear, cool, and calm, it was a perfect morning for bow hunting spring turkeys. Although I knew there were turkeys in this particular woodland…

Randall: A Summer to Daydream

On my way home from the post office, I drove past a school. The parking lot sat empty, the place looked abandoned, like a dry well waiting for rain.

Rugland: Flexibility is a good thing when it comes to decision making

My recipes had been scattered about in cookbooks, on loose sheets of paper, in Pinterest and on Facebook. Now they’re all listed in one place.

Babies will continue to die during sleep despite new regulations on sleep products, child advocates fear

Child safety advocates worry these new regulations, while well meant, will not make a significant dent in the number of annual infant deaths.

South Dakota’s Republican governor is pledging to bar mail-order abortion pills but says women shouldn't face prosecution for seeking them. Kristi Noem's stand appears to be in defiance of legal guidance by the Justice Department after the Supreme Court last week stripped away women’s constitutional protections for abortion. The governor is indicating that she'd put in place a plan approved by state lawmakers to restrict the abortion pills. The ruling Friday by the court’s conservative justices triggered abortion bans in South Dakota and elsewhere. But Noem says in news show interviews that doctors, not their patients, would likely be prosecuted for knowing violations of what would be one of the strictest laws on abortion pills in the United States.

How a heat pump can cool your home in the summer

As temperatures and energy bills spike in the summer, it might be time to consider installing a heat pump.

You and your best friend may have your noses to thank in helping bring you together, a new study suggests.

Wobbly on one leg? Ability to balance is linked to a longer life, study finds

An inability to stand on one leg for 10 seconds in later life is linked to nearly double the risk of death from any cause within the next decade, according to a new study.

Europe is preparing to take the global lead in regulating the freewheeling cryptocurrency industry at a time when prices have plunged, wiping out fortunes, fueling skepticism and sparking calls for tighter scrutiny. The European Union took a first step late Wednesday by agreeing on new rules subjecting cryptocurrency transfers to the same money-laundering rules as traditional banking transfers. A much bigger move is expected when EU negotiators hammer out the final details on a separate deal Thursday night for a sweeping package of crypto regulations. Like the EU’s data privacy policy that became the de facto global standard, the crypto regulations are expected to be highly influential worldwide.

While the life span of appliances in our home may not be something we regularly think about — if at all — it doesn’t hurt to know how many years you have left on your favorite household helpers.

Tips for getting back in the dating game post-divorce

How exercise snacking can help keep you in shape

How exercise snacking can help keep you in shape

A drake wood duck with its elegantly crested head and kaleidoscope plumage.

Wood ducks have the very unduck-like habit of nesting in elevated tree cavities.

Once a clutch of eggs hatches, the hen calls her young from the nest. Hopping to the cavity entrance, the ducklings do not hesitate to jump no matter how high the nest. Once the brood is assembled on the ground, the hen leads them to water.

A pair of wood ducks enjoy their wetland surroundings.